Kawasaki SA launched the exciting and much anticipated supercharged H2 at Rand airport in a hanger surrounded by some iconic aircraft, nice!! The Boss of Kawasaki SA, Chris Speight, stood alongside the shrouded H2 and hinted at the H2 heritage as he expounded on the virtues of the keenly awaited bike. The supercharged engine sets the new H2 apart from any other current Superbikes on offer. 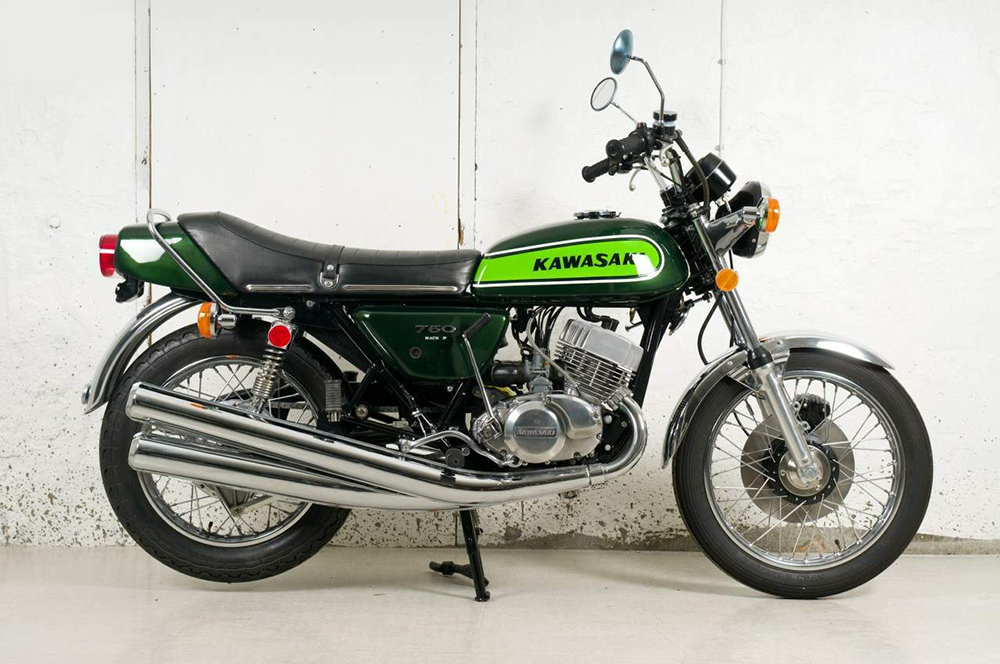 At the time, the superb American motorcycle magazine “CYCLE”, did a comparison of the 1973 Superbikes and Kawasaki had two contestants, the 750 H2 Mach IV and the Z1, a 903cc four stroke four cylinder bike, which soon established itself as the benchmark for all round performance and ride-ability. However, on this trial, its performance was eclipsed by only one bike, the original H2.

“The H2 is the quickest, most intense, most single-purpose street machine ever built for general consumption. A steaming, purple-eyed monster that does everything with a shriek and who’s only God is performance. Lay at its feet the hottest production vehicle you can name – two wheeled or four – and the H2 will chuckle, snort and eat it alive.”

Looking at the new H2 in concept, design and execution, I think that CYCLE’s description of the original H2 may just be hauntingly prophetic, as it pertains to the 2015 version. As is so often the case with motorcycles, no photo yet published does the H2 justice. It’s truly exquisite. The paint, using real silver as part of its makeup, gives the bike a deep, glossy, gunmetal finish, which must be seen to be appreciated. The black engine, combined with silver accents like the supercharger housing, is pure class. The exhaust headers are fat and curve magnificently to a four into one collector feed which, one presumes, leads on to a rectangular box housing the catalytic converter and from this emerges a gargantuan tail pipe. In all honesty the “tailpipe” does tend to minimize, in the minds eye, what is a truly huge triangle of metal, which comprises the exhaust outlet. Functionally the force fed motor probably needs that volume but this is a challenge that the likes of Akrapovic, Arrow and Yoshimura will relish.

The bike makes no pretense about this – it is strictly a pilot only configuration – No passenger seat or pegs, period! The tailpiece has adjustable sides, which allows the rider to brace his butt whilst unleashing the beast. The star shaped alloy wheels are black with machined silver highlighted edges – STUNNING!!

The hand-built finish, absolute hyper performance potential and state of the art Brembo, Ohlins and Kayaba hardware, all help to justify the eye watering price tag, which is rumoured to hover around the R300K mark – “Pay yer money and takes yer chances”.

We understand that the supercharged marvel should be on showroom floors by May. We also know that the excellent Kawasaki Dealer in Boksburg, Holeshot Motorcycles, have an event to launch the bike today (invitation only.) This marks the first dealer launch in South Africa of the H2. Needless to say ZA Bikers will tell you all about it in the forthcoming week.

No matter where the H2 ends up on the Superbike hierarchy, Kawasaki Heavy Industries must be commended for building what, like the original H2, will undoubtedly become an iconic piece of two wheeled history.

The good news is that Kawasaki SA has been granted its full allocation of H2’s. ENJOY!!