Home News & Reviews News The beginning of the end 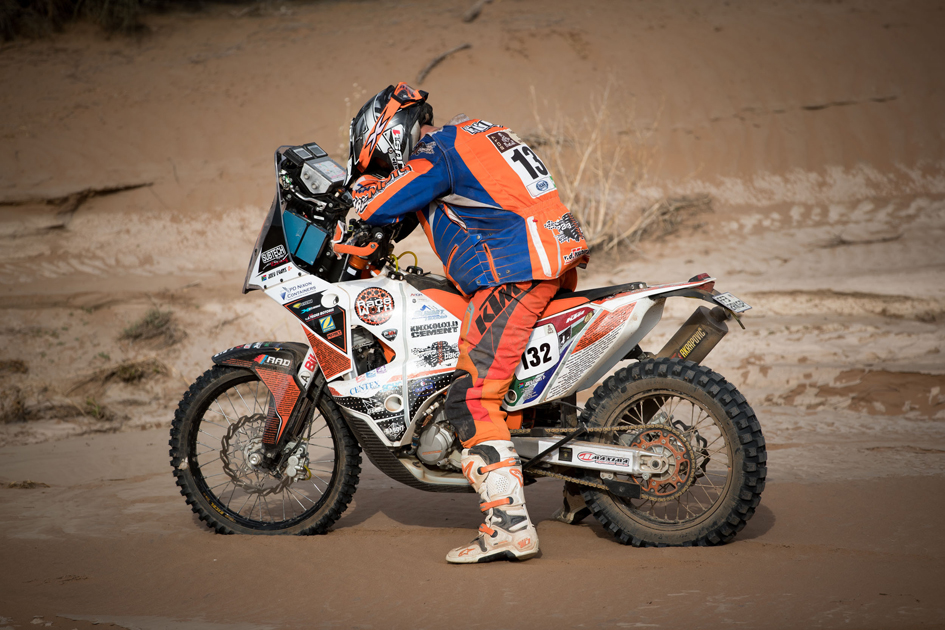 By far the the best book I have every read is the story of Joey Evans. At ZA Bikers, we where very fortunate to have played a small part in Joey’s story, and we will always cherish that period in time. Read below the first chapter from Joey’s book and be sure to buy the full hardcopy if you would like to read his full story.

Extracts from: Joey Evens – From Para to Dakar.

Chapter 1: The beginning of the end

The alarm on my motorbike burst to life with three sharp beeps. Its sound was clear and distinct even through my earplugs and over the growl of the large titanium Akropovic pipe sticking out the back of my KTM 450RR rally bike.

I was exhausted, my face was raw from wearing goggles caked in mud and dust against my sweaty face for the last eleven days. My lips were weathered and split, my hands were blistered and my body was chafed, dirty and completely fatigued.

The scream of the alarm always sent a shock of adrenalin right through my body, forcing me to pay attention regardless of my mental or physical state. Its penetrating sound meant there was a rally car or truck behind me that was about to overtake me. At least that’s how it was explained at the riders’ briefing before the rally. In reality, it meant ‘get the hell out of the way if you want to live!’

The risks we took as bikers were far more daunting than the rally car drivers in their protective cages. The motorbikes set off first each morning, opening the track, followed shortly afterwards by the cars and then the trucks, both of which were faster than most of the bikers. That meant I was caught and passed daily by at least the leading vehicles. I had heard the alarm many times during the rally and I always chose life.

Once the approaching car or truck starts to see the dust of the bike ahead, they press a button in their vehicle that sets off the alarm mounted on the bike ahead. This system worked well for both parties as the biker would be safer and the car would be able to pass more quickly. As a biker, once my alarm sounded I would look back and see the vehicle usually about 200 metres away and get an idea of how long I had to get off the track before it passed me. Then I picked a spot to pull off the track to safety and stopped. After a few seconds the vehicle would roar past, kicking up fist-sized rocks and dirt in its wake, leaving me invisible in a thick cloud of dust that completely engulfed me.

Once the dust settled, I would look back along the track for other vehicles before racing on, shifting hard through the gears and leaving my own stream of dirt and dust behind me. Of course I had the choice of just pulling to the side of the track and allowing space for the vehicle to pass. I had tried it once, earlier in the race, and found myself completely blinded in the thick dust travelling at 120kph. Not knowing where the gravel road was heading, I ended up in a bush.
Lesson learned.

But this time it was different. As the siren went off I turned to see the approaching vehicle through the dust but it wasn’t the usual 200 metres behind me, it was a mere 30 metres away and was closing in at twice my speed. I had only three or four seconds to get out of the way before impact. I tried to get out of the deep rut, weighting my right foot peg and pulling hard on the bars, twisting them to the left and keeping the power on. The front wheel just scraped in vain against the left wall of the rut compressing the forks, my wheel unable to climb out. The bike tucked as my body exited left off the track, parting from the bike in a last ditch effort to escape the imminent impact of the car behind me.

The car missed me by millimetres only to drive right over my bike, its two-ton weight crushing the frame as its tyres ripped mercilessly through my tanks and navigation tower. Blinded by the fesh-fesh filling the air, I heard the impact right next to me. I knew exactly what was happening, the crushing sound unmistakable above the roar of the car’s engine.

I couldn’t believe it! If I had fallen the other way across the track, I would have been dead for sure! The car stopped about 30 metres ahead of me, the navigator opened his door and stood next to the car, one hand still resting on the door frame, and gave me a thumbs up as if to check whether I was alive. I was still on my knees in the dirt right next to the track when my mangled bike came into sight as the dust cleared.

But he jumped back into the car and they sped off, leaving me stranded next to what had been my bike. I was seething. He had almost killed me, ridden over my bike and then left as though it was an everyday occurrence. I couldn’t believe his callous indifference for my life.

Alone, I stared down through tired bloodshot eyes at the wreckage and the horrifying reality hit me. I was out of the Dakar Rally. Words cannot describe the feelings that came over me. It’s true that every Dakar competitor makes sacrifices to be there, each one has forfeited holidays, relationships, homes, jobs and worldly possessions to take part in this daring crazy race. All of us have trained for years to reach the level needed to compete. But it felt different for me; it seemed so much more. I’d promised I’d never give up, but this was out of my control, it was the end, a dream destroyed, a fight lost.

It had taken me nearly ten years to recover from the accident that had paralysed me, 51 nights in hospital, over 350 physio sessions, countless hours in the gym, more than 30000 kilometres of hard training, and untold sacrifices – was this how it was going to end?

Read the rest of Joey Evans’s amazing story in his book: Joey Evens – From Para to Dakar.