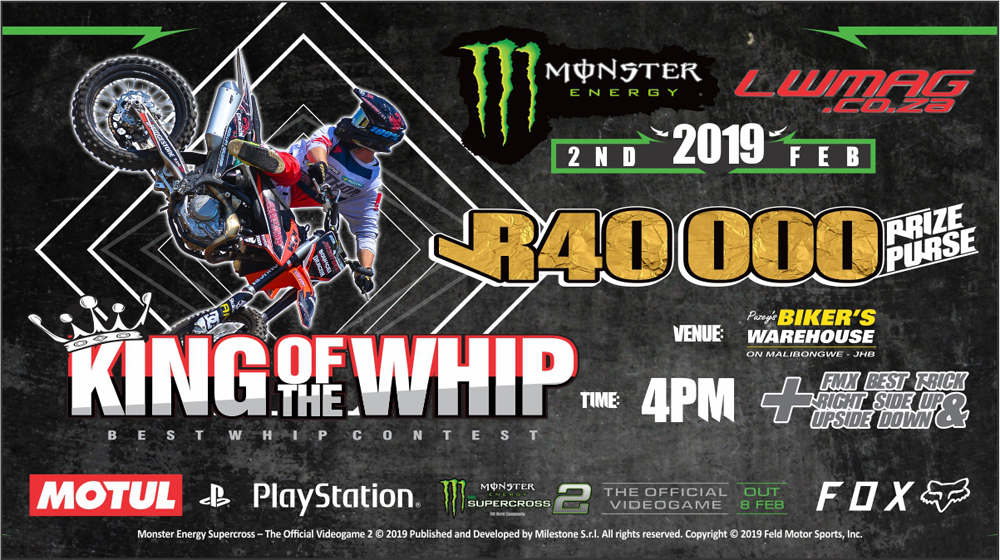 LW Mag and Monster Energy are excited to present the 2019 King of the Whip – Best Whip Contest, in association with Motul, PlayStation (Monster Energy Supercross 2 – The Official Videogame) and Fox Racing. On the 2nd of February 2019 witness the country’s best Motocross and Freestyle Motocross athletes battling it out to for a share of the R40 000 prize purse and to see who’ll be crowned King of the Whip.

Proceedings are set to kick off at 4pm with the prize giving expected to take place around 9pm. Riders will be split into groups and will have to qualify through the jam session rounds. Judges will be looking for style, amplitude and variation, and riders that score high enough points will advance to the finals.

King of the Whip organiser, Ryan van der Spuy says, “We’ve been waiting excitedly for a whole year and we’re finally back. We’ve upped the ante for this year’s King of the Whip bringing bigger-and-better to both the riders and spectators. To our event partners, thank you! Thank you for making this possible and enabling our top riders the opportunity to showcase their skills on dirt bikes. It is going to be extremely fun, crazy and exciting,”

A maneuver performed on a motorcycle, usually during a motocross or freestyle motocross contest, in which the rider brings the rear of the motorcycle abruptly around to either side. Performed while the machine is airborne off a jump. In very extreme whips, the rear of the motorcycle will end up perpendicular to the direction of travel, in addition to the motorcycle being laid flat. The purpose of the whip is to show off, to alter the trajectory of the bike in flight, and to scrub speed over jumps.
We invite everyone, families and friends, to join us in witnessing this highly anticipated, adrenaline-fuelled event. Entrance is free and there will be food and beverages on sale.

King of the Whip event details: