“I had to work for that one!” Mossel Bay star William Oosthuizen owned up. “Thursday’s time trial never went quite as planned and I found myself seven minutes off the pace, but I fought hard to halve the gap on Friday and then Saturday was brilliant and I managed to turn it around to win by five minutes. “We fought hard this weekend and it paid off — that’s four E1 wins out of four races! “Huge thanks to my brilliant Pepson Plastics team for a superb Husqvarna as always this weekend.”

Matthew Green enjoyed his best result of the season as he raced to a strong third to make it a double Pepson Plastics Husqvarna podium in E1 at the IMPI. “I had a good run this weekend,” Matthew confirmed. “I was in the top three throughout and my Pepson Plastics Husqvarna ran like a dream — it was also a good weekend for the championship, so it’s onward and upward from here — can’t wait for the next race!”

Brett Swanepoel likewise enjoyed a good weekend in Eshowe on his way to fourth in E2. “I’m happy with another strong points haul in fourth even though I was just 20 seconds away from a podium finish!” Brett admitted. “That’s also my fourth finish in four national starts so far this season — I have the best team behind me in Pepson Plastics Husqvarna Racing and we are getting stronger race by race.”

“Four wins in four races has set William Oosthuizen and his Pepson Plastics Husqvarna out as the combination to beat in National E1 enduro racing,” Husqvarna South Africa Motorcycles brand manager Fred Fensham concluded. “William pulled out all the stops to come from behind to win the ultra-tough IMPI Hard Enduro and his teammates Matthew Green and Brett Swanepoel also starred this weekend — excellent work by the entire team!”

The next round of the MSA National Enduro Championship sees a complete change of scenery for Pepson Plastics Husqvarna at the rugged Robertson Enduro in the Western Cape on 24 August. 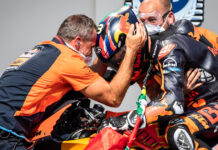