The 2019 edition of the brilliant Cancervive initiative was hosted by new additional sponsor Sun International, at the fabulous Sun Arena, Times Square in Menlyn Pretoria. ZA Bikers are honoured to be involved once again as official media partners for this prestigious event
and we are very excited about this year’s ride.

What struck me as I watched the proceedings was the fact that sponsors of this cause are totally selfless. Whilst they all contribute to make the event the success that it always is, there, in all honesty, is not much for them to gain. It really is the purest form of giving, being sacrificial.

From a biking perspective, Bryan Berger and his team from Indian motorcycles, despite the stuttering economy, did not hesitate to put up their hands as motorcycle sponsor once again. Bryan and Mel, we applaud you!

This was the official press release announcing this years event…

On the 22 August 2019, the wheels were set in motion for the ninth Cancervive Awareness Ride that will see cancer survivors and an entourage of supporters, performers and motorcyclists take on an epic, eight-day journey to spread the word about the importance of early detection and share their stories of hope with people in remote areas of South Africa.

With the support of Sun International, Time Square, SPAR, Indian Motorcycle SA, Mercedes-Benz SA, Meadow Feeds, the SABC Foundation, ZA Bikers and Netcare 911, the Cancervive team will traverse over 1 200 kilometres across Gauteng and the North West Province to reach close to 30 000 people in outlying areas. The Cancervive entourage will leave from Time Square on 5 October 2019, riding to towns such as Middelburg, Heidelberg, Hartbeespoort, Magaliesburg and Rustenburg amongst others, returning to Time Square on the 12th.

During the journey, the team will make stops in remote communities and through industrial theatre, share important messages in an accessible and engaging way. The importance of testing and early detection for survival, the signs and symptoms of common cancers and where to go for help are amongst the messages they will share with their audiences.

Survivors also share their testimonials, helping to break down some of the taboos, stigmas and fears surrounding cancer. Posters and leaflets in multiple South African indigenous languages explain signs and symptoms of cancer and encourage people to seek medical help as soon as possible.

Speaking at the launch of the 2019 Cancervive Awareness Ride at Time Square in Menlyn Maine, Sinki Mlambo, Cancervive Project Leader, explained that awareness of cancer, as well as its signs and symptoms, is low in remote and rural areas. Cancervive (pronounced “can survive”) was born from the dire need to raise the level of awareness of cancer amongst people in remote areas who are just as affected by the disease as those living in metropolitan areas.

“Cancer is shrouded in myths, including the widespread belief that it is mainly a ‘white’ person’s disease. Yet, cancer is prevalent in African cultures as well. True incidence rates are however masked due to under-diagnosis steaming from the fact that cancer education and testing is not readily available in remote African communities. It is critical that awareness of cancer within this population group is raised to encourage early diagnosis and treatment, which ultimately leads to a better prognosis for patients.

“Since its launch nine years ago, Cancervive has entertained, educated and engaged more than 260 000 South Africans, face-to-face in seven languages. Over the past eight awareness rides, cancer survivors and volunteers have travelled over 18 700 kilometres on motorcycles across the length and breadth of the country to reach their audiences. Millions of South Africans have also been touched through the support of media channels on TV, radio, online and in print. The impact is phenomenal.

“We are now gearing up for our ninth Cancervive Awareness Ride during which we will directly reach 30 000 more people. The ride would not be possible without the support of our sponsors, volunteers and concerned media who enthusiastically follow and share the story,” says Sinki.

SPAR is proud to be headline sponsors of this vital cause, as Helen Barrett, SPAR Group Advertising and Promotions Manager, explains; “The prevalence of cancer means that we have all dealt with a loved one or someone close to us experiencing this disease, so it is a cause very close to our hearts. Aligned with National Woman’s Day campaign, it is fitting to be supporting such an inspiring and dynamic group of people who are educating communities and changing lives. SPAR is very proud to be part of this important awareness campaign.’

Brett Hoppé, General Manager at Time Square says: “When Cancervive approached us earlier this year to support them with accommodation for their ride, we did not hesitate. They have a tremendous goal in creating awareness of cancer in marginalised communities that are also affected by the disease. The outcomes of the rises over the past eight years speak for themselves and we are proud to be associated with such a worthy cause.”

Bryan Berger, CEO of Indian Motorcycle SA says: “Indian Motorcycle allows you to express your personal freedom uniquely. Cancervive resonates with me in that it touches everyone in some way or another, but the fighting spirit of the survivor is another freedom in itself and that is essentially what we all aspire to.”

The Cancervive 2019 Awareness Ride follows a route through cities, towns and rural communities in Gauteng and the North West Province. Follow the route here: 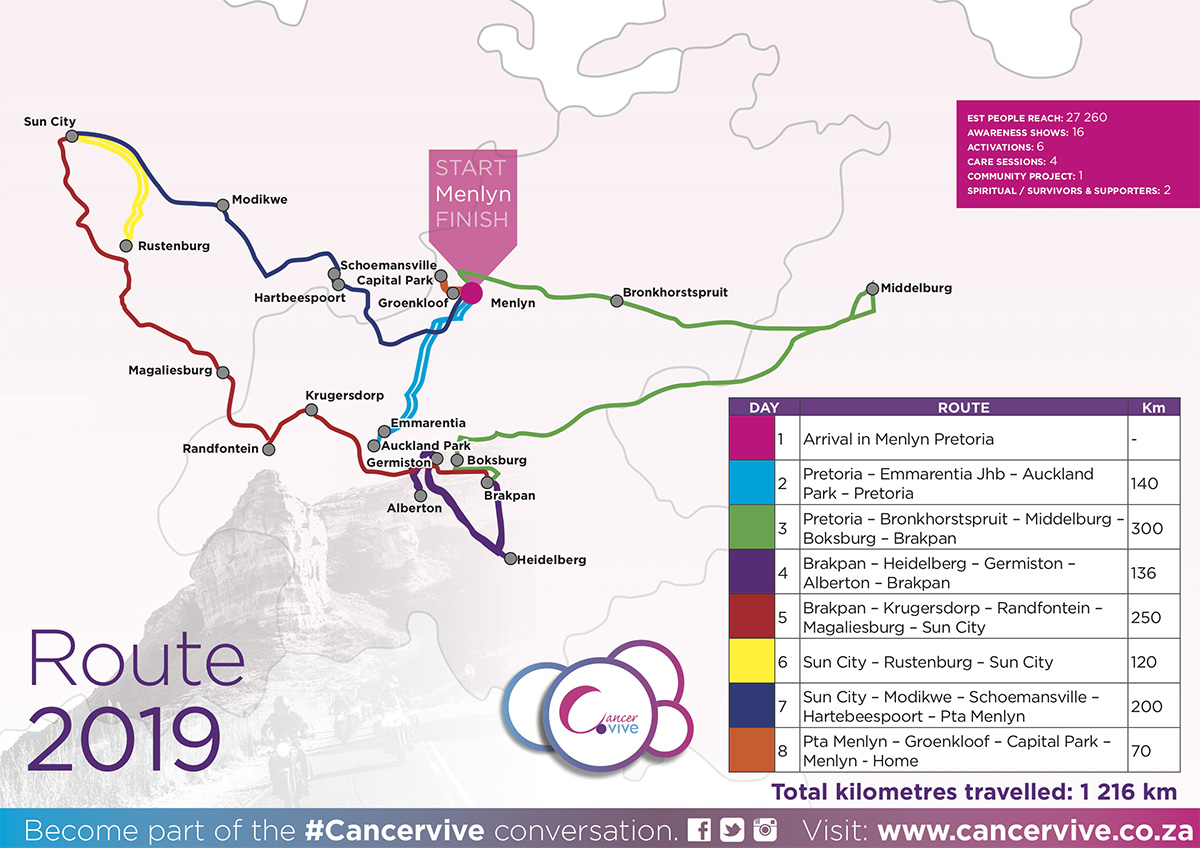