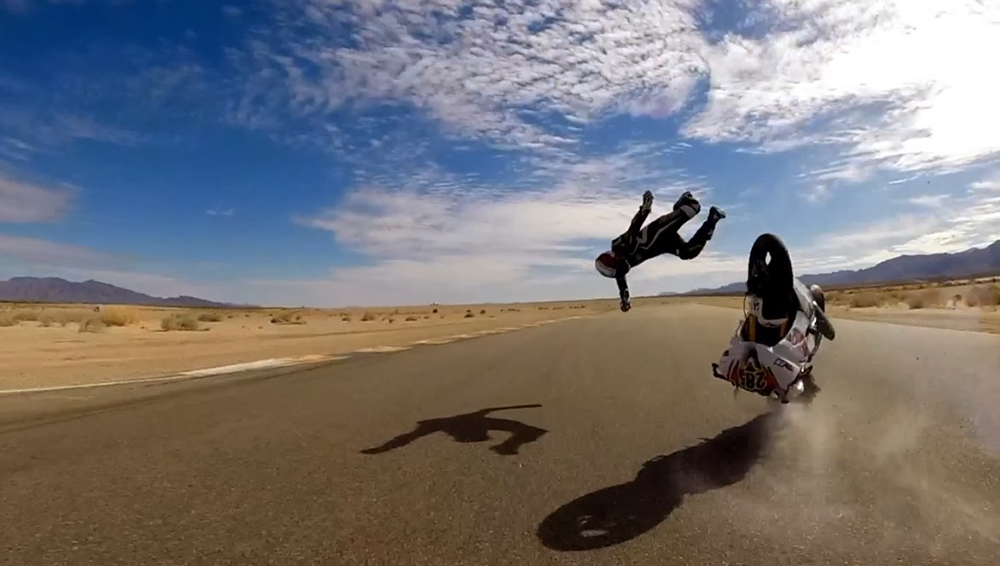 When folks hear that I have ridden bikes for nigh on 47 years, the inevitable question arises, “So Dave, have you ever fallen off?” Well, Duh, Hallo, of course I have! I mean is ducks bum watertight? Motorcycles are inherently unstable vehicles. Leave them to their own devices and they fall over. Nothing assists this falling over process as much as a rider. In our defence however, there are occasions when we are helpless participants in this unpleasant process. Let me tell you about my first “proper” crash. I say “proper” because prior to the incident I am about to tell you about I had two “new rider” get offs. I low sided my CB125S Honda on a huge swathe of diesel deposited by a bus on a nice sweeping corner. The one moment I was pitching the bike into this lovely right-hander in Crown Avenue in Pretoria, and the next moment I was trying to overtake the sliding bike on my bum. I duplicated this error on a sand strewn corner after a typical Highveld thunderstorm had washed fine sand over the road. Let this be a lesson to you. Experience and awareness have subsequently negated these slippery threats. So, back to the biggie…

1978. My Honda CB750FZ was a year old and really fast for the time. Gutted 4 into 1 exhaust, properly jetted with the air box drilled to breath better. The biggest contributor to top speed was the Bobby Bell full fairing, (including enclosed belly pan) and single seat and tail piece. Despite substantially lengthened gearing the F2 would rev out to 11,700 rpm in top gear. A whopping 2,200 revs past the 9,500rpm red line. It would pin the needle on the Nippon Denso speedo to cover the ND logo at 6 o’clock. A good centimeter past 220kph. The fairing and tail piece contributed 1500rpm on top end. Amazing! If you think I have gone off at a tangent? Not really. You see I’m trying to set the scene. Back in ’78 the roads were good and un-congested. This meant a serious amount of riding time was spent testing top end.

On the day of the incident some mates and I were returning from Kyalami. The Ben Schoeman freeway was a new two lane, super smooth piece of black top. The opposing lanes were separated by a wide stretch of dirt. Riding towards Pretoria, we crested the hill at new road and started gathering some serious speed down the long downhill that followed. This was the F2’s moment to strut its stuff! I gripped the clip on bars firmly and tucked in behind the production racing fairing bubble. The bike ran the speedo needle off the dial with the shriek of a high revving four. I flew past my mate on his Goldwing GL1000 and was now bearing down on a car in the fast lane perhaps 400 meters ahead. I thought if I chopped the throttle and let the motor run against compression I would scrub off enough speed differential between the car and my hauling F2.

As I rolled of the throttle the violent weight transfer onto the front wheel caused the front wheel to burst. The deflated tube bunched up inside the tyre, distorting the flat tyre and ripping the narrow clip on bars from my grasp. At over 200kph things happen quickly to say the least. The human brain never ceases to amaze! Instantly I realised I was not going to recover control and I remember thinking, “Now you must relax and roll, ’cause if you tense up you’re going to break bones”. The next millisecond I hit the tar, and, according to the eye witness account of my buddy on the Gold Wing, bounced at least 4 meters into the air. My second coming to ground was on the dirt between the two lanes, whereupon I first bounced, then rolled and slid 110 paces (I know this for a fact because we subsequently returned to the scene and measured the distance from the gauge marks made by the bike on the tar, to where I eventually came to a rest.) Just so you get some idea, we are talking the full length of a rugby field!

I marvel at the inherent strength of the human frame. The Bible says we were “wonderfully knit together in our mothers womb”. You better believe it. You would expect a 200+kph thump, followed by 110m of tumbling to literally rip you apart. People who saw the fall all expected the worst. As providence would have it the ground was soft from a week of heavy summer rain. The muddy surface must have cushioned my fall to some degree. At some point my full face Schuberth helmet came off my head. My glasses were ripped from my face by the departing helmet, breaking the frame and slicing a 4cm gash across my forehead. Covered in mud with blood running from my forehead into my ear and out again I looked a sight. An ashen-faced woman whispered to a companion, “He’s dead, there is blood coming out of his ear”. Despite feeling a bit like a frog after a session in a blender, I was still very much alive. I opened my eyes and muttered that I was ok which seemed to upset the woman even more. I seemed to the casual onlooker to be more dead then alive.

There was another weird aspect to this drama. The world was tinted blue. Serious! It was as if I was seeing the world through blue cellophane. I tried to get up but fell over. You try standing up after 110m of “ring-a-roses”. Dizzy just doesn’t adequately describe where I was. Someone put me in the back of their car and whisked me off to the hospital. I don’t really recall the journey so I must have passed out from the shock. “Casualties” started cleaning my wounds. A huge divot out of my left knee and smaller one out of the right. My right hip also lost a chunk of flesh. The strut holding the fairing uppers broke and stabbed my left upper arm to the bone. Structurally I was amazingly intact. Two broken metacarpal bones in my right hand, which has probably involuntarily stuck out to break my fall. That was it! A serious shot of morphine chilled me out while they scrubbed and dressed my wounds. I went home the same evening.

My poor F2 didn’t fare so well. It stayed on the road, somersaulting over the car that had initiated the deceleration, and subsequent carnage. The front fork stanchions snapped clean off. The crankshaft was bent from the sides of the engine slamming into the tar. The bodywork self destructed totally. It eventually ended up on the left of the highway about 300 meters from where the wheel popped.

Now remember, this was long before cell phones. Feeling rather the worse for wear, I decided a bit of parental TLC was needed. I got my mates to drop me off at my folks apartment. They just about keeled over when this bloody and muddy apparition pitched up on their doorstep. Once over the initial shock and reasonably certain that I was not about to expire, my dad reckoned that all I needed to win a Frankenstein lookalike contest was a bolt through my neck! Charming. I consoled myself with the fact that at least chicks dig scars!

I believed that what saved me from serious, or even fatal injuries, was the fact that I never rolled into anything solid. Gloves, Leather jacket and Sidi boots reduced my injuries significantly. Jeans really offer no real protection, hence the severe roasties from which I bear the scars 37 years later. So there you have it. The full account of my first proper attempt at studying my fundamental orifice without the assistance of a looking glass. 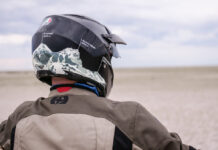 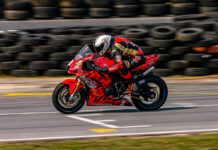 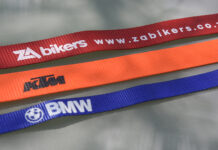