The Kawasaki Versys has undergone a significant change for 2015. So much so that it would be doing the bike a serious injustice by speaking of the changes as a “facelift”. The changes are numerous and worthwhile. Let me explain…

Power is up 4bhp to 68 with a corresponding slight hike in torque. The performance feels pretty similar to the previous model though, possible due to the hike in weight of 8kg’s. This weight results from additional bodywork, (a handsome double headlight fairing with a manually adjustable screen). The screen deserves mention for the 5 odd cm of height adjustability, as well as the ease with which the adjustment is achieved. Two knobs on the front of the fairing are loosened, allowing the screen to be set at the required height and then simply retightened. Clever! With the screen height at maximum I could ride with little or no buffeting or excessive wind noise around my helmet. I am 6’3” in the old speak, so shorter riders will have no difficulty in achieving the screen sweet-spot. 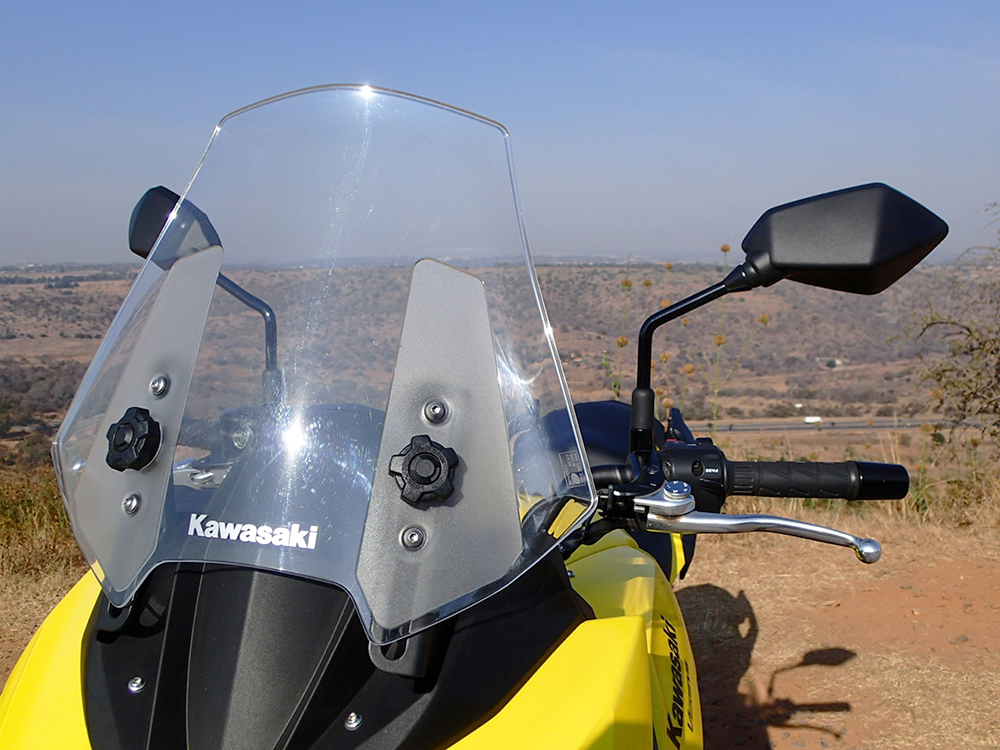 Fuel capacity has increased by two litres from the already decent 19L of the old model. Allied to the decent fuel consumption this allows a 400km+ range at a steady 130kph. At this speed the engine is turning 6,500 rpm and is devoid of any vibration. At 65% of available revs the bike feels relaxed and unstressed. Consider this… Fill up in Jo’burg and ride to Bloem before having to refuel. You arrive at the same time as your sport bike mates who, travelling 25kph faster, had to stop in Ventersburg for fuel.

The new Versys sports an econometer which indicates when the engine is only sipping fuel. As you exceed 130kph the econometer goes off. Motorcycles are not particularly aerodynamic and require more and more fuel to push them through the air as speed rises. As mentioned, the motor, now sporting rubber front engine mounts, is really smooth. All twin cylinder thudiness disappears over 3000rpm and the bike remains super smooth all the way to redline at 10,000rpm. Being a parallel twin, the bike sports decent midrange and reacts nicely to the throttle. You really don’t have to rev it stupid to get it to go. The power delivery is perfectly linear. The higher it revs the harder it pulls, albeit underpinned by a decent torque delivery, peaking at 7,000rpm. 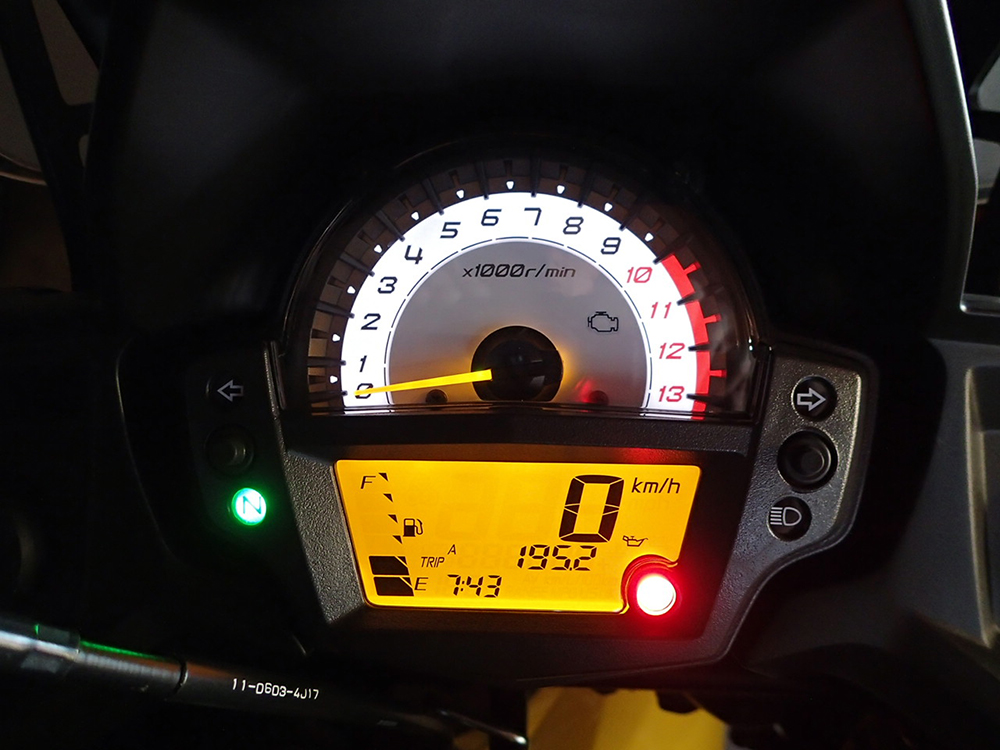 The six speed gearbox is a bit of an anomaly in that it is accurate and precise with both up and down shifts as long a the bike is ridden with gusto. Whilst just nurdling along, the shift action becomes lumpy and noticeable for its lack of precision. Owners will more then likely adjust their riding style to accommodate the idiosyncrasies of the gearbox as I did. Accelerate briskly and “blip” the throttle on downshifts and “hey presto”, all is sweet.

The suspension offers 150mm of travel from the adjustable Showa front forks, and 145mm travel from the KYB rear shock which also now sports remote preload adjustment, “ala BMW”. All in all the suspension offers a controlled ride even over bumpy pock marked surfaces. The bike steers with reasonable accuracy and composure. Whilst no razor sharp track tool, the Versys is enjoyable in the twisties and not a pain on the straights. All in all a decent compromise. The bike copes well two up from both a power and suspension perspective. The seat scores about a 7 on the tail-o-meter for both riders and passenger (BMW RT is a 10 on said meter and a Suzuki DR650 around a 4 if you need some frame of reference). 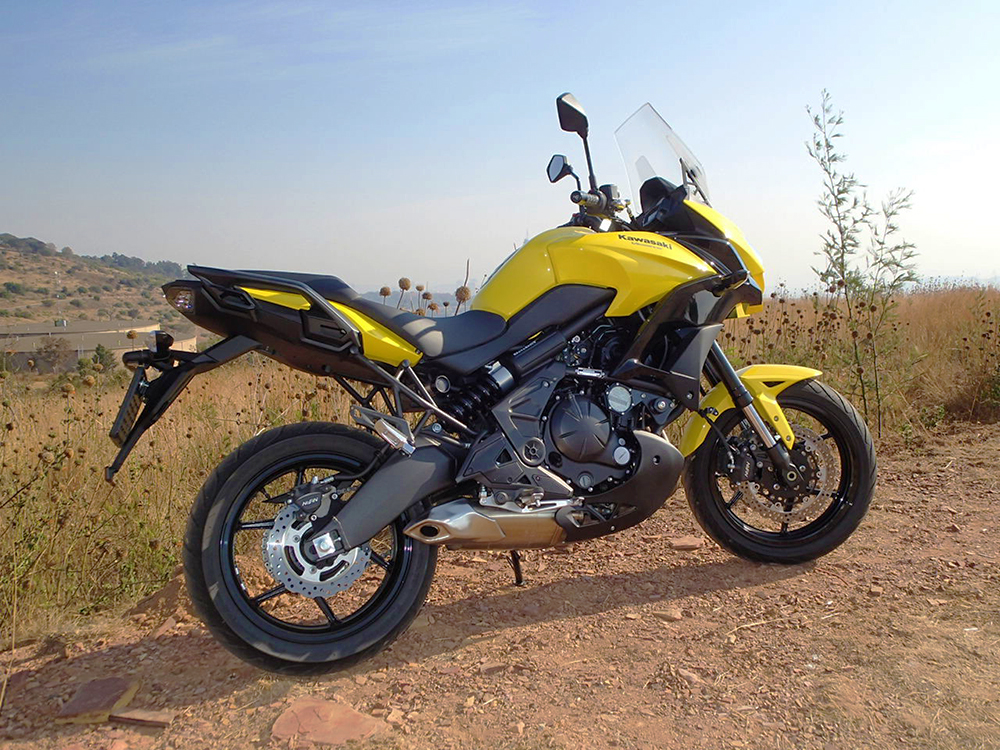 The sound that a bike produces when ridden has a profound effect of the overall impression left with the rider. The Versys charms in this regard. The Buell like exhaust canister centralizes mass under the motor and is tucked away neatly. Cracking the throttle produces a combination of airbox induction and exhaust noise that is akin to a turbine spooling up. It’s really pleasant and addictive.

So what do I get when I lay down my R89 995 on a new Versys? In short, a truly competent medium weight sport tourer. It is practical, comfortable and with now proven reliability over a number of years. Commute in the week, tour on the weekends. Cruise the highways and byways with the significant other. The Versys will do it all without fuss or bother. Its quirky looks have now been replaced by a now really handsome countenance. The metallic yellow of our test bike offset beautifully with largely black trim and wheels looked superb. Double discs up front and a 30 mm larger disc on the rear stop the plot without fuss and plenty of feel. 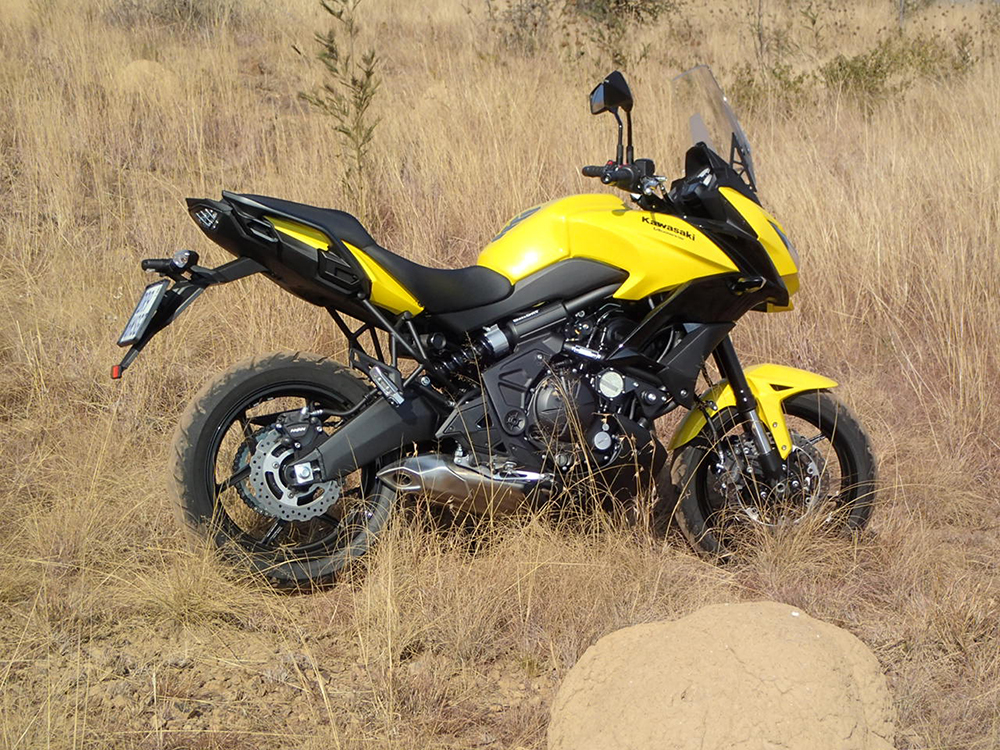 As is the modern trend, the instrumentation is comprehensive and legible even in bright sunlight. The analogue rev counter sits atop a digital panel which houses a speedo, fuel gauge, trip meter, average and current fuel consumption readouts and distance to empty. The aforementioned econometer as well as clock complete the picture. All this info is accessed by the push of a single button.

If you are in the market for a multifunctional motorcycle that can fulfil your needs in a really satisfying way, look seriously at Kawasaki’s latest Versys. Even good dirt roads are well within its capabilities. I rode quite a gnarly, rocky mountain bike track to take some photos and was amazed at how composed the Versys remained despite taking it out of its comfort zone. A veritable Swiss Army Knife type of bike. 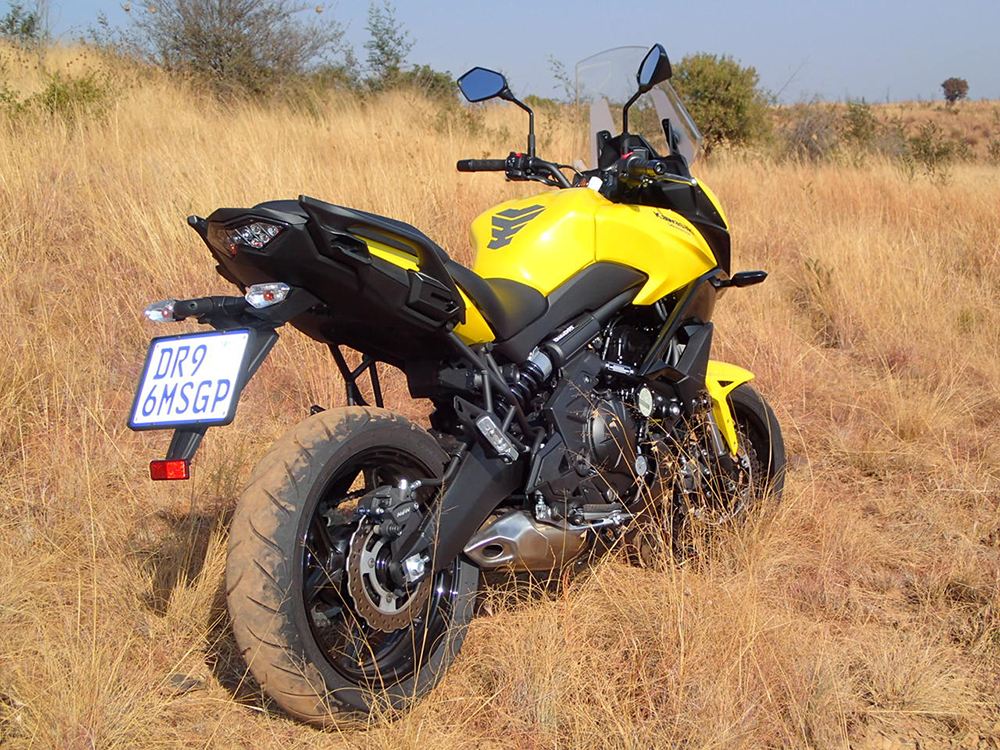 Whilst Kawasaki have enhanced the versatility of the Versys even further with the 2015 model, we are reminded of what a good bike the 2014 model is. Kawasaki S.A has secured a decent stock of 2014 models at a recession busting price of only R65 995. Absolutely fantastic value for money! Worth a visit to your local Kawa dealer don’t you think?

For more information on the Versys 650 visit: www.kawasaki.co.za