Kawasaki’s Ninja turns 30 in 2015, which means that the Ninja brand has been around for as long as what I have. Unlike me the Ninja has definitely become better looking with age….

Thanks to Kawasaki SA, I had the opportunity to spend a weekend aboard the 30th anniversary edition ZX10. Over the last 4 years or so I have been in an envious position admiring ZX10’s as they roared passed me on the race track and disappeared into the distance, at a million miles an hour. So this was a perfect opportunity to go behind enemy lines and see what the Ninja is all about, and to be honest I was quite excited. If you chat to the majority of South Africa’s club and national racers it’s almost unanimous that the ZX10 is the bike to be on. So let’s see if the bike lives up to the hype…. 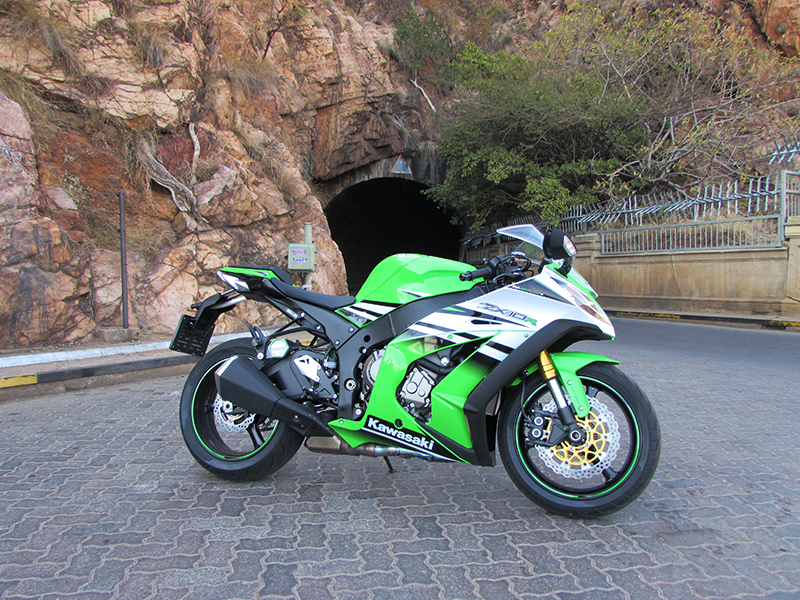 ZX10 Styling
The ZX10 is not a brand new model in the 1000cc class for 2015. The current design made its first appearance in 2011 and the competitors have been eating its dust ever since. The only new option for 2015, is the 30th anniversary livery available on a “special edition”. The traditional Kawasaki Evil green and Pearl Stardust colour configuration is striking and turned a lot of heads in the 2 days I tested it, that pearl white is absolutely mesmerizing. The overall look and finish of the bike just screams FAST! Through its aggressive styling and sleek lines you can see this bike was made for the race track. The LED tail-light and indicator finishes, which are integrated in the mirrors, really give the bike a classy feel. I am glad that Kawasaki stuck with the traditional headlights and didn’t get the crazy idea of giving the bike a lazy eye, like some of its rivals. The bike does need an aftermarket exhaust though, the standard one is a bit of an eyesore and looks a bit like something Arnold would be curling at Gold’s gym, back in the day. A Yoshimura or Akrapovic slip on will do the trick nicely, and not only look the business but will probably shave off a few Kg’s as well.

On the Throttle
Kawasaki was one of the first manufacturers to enter a 1000cc superbike into the magical 200HP club and it really goes like a rocket, the power just keeps coming and coming. Tearing down the Midvaal back straight, I had to tap off long before finding the bikes limit and top end. The power is refined and with the three power modes and traction control settings, which really work, it doesn’t feel like it wants to throw you over the handle bars at any given opportunity. The traction control (S-KTRC) plays its’ part to give the bike amazing road holding and in my opinion is there to allow the rider to ride the bike on the limit, although it also caters for the safety aspect, a great selling point when you need to convince your spouse on the showroom floor. The bikes midrange is really punchy and the drive out of the tight and twisties is an absolute pleasure. The 6 speed box is slick and makes clutchless shifting so easy and smooth to master that a quickshifter would be a very low down commodity on the grocery list. The Kawasaki ZX10R really reinforces the whole “Smooth is Fast” catch phrase. 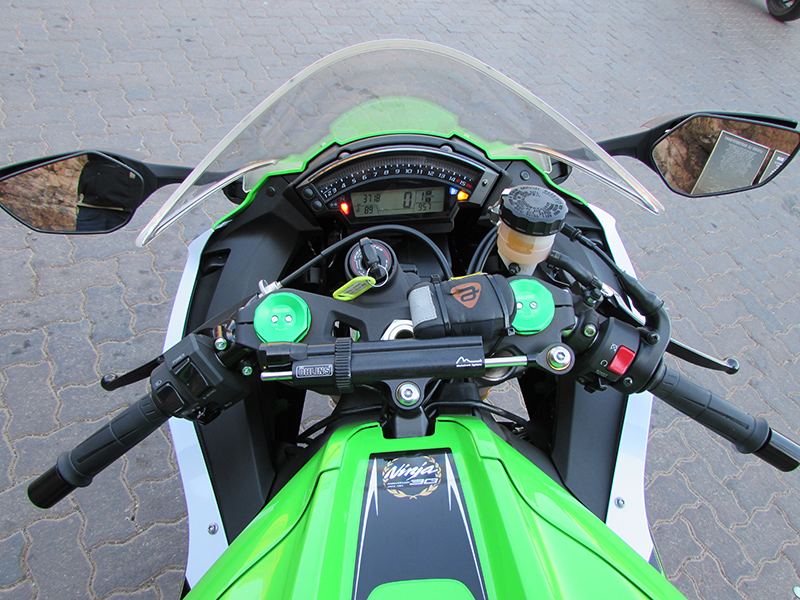 Through the bends
The ZX10R is fitted with an Ohlins-Kawasaki electronic steering damper, this really helps keep the bike stable at speed and really did a good job eliminating any nasty head shakes when I was running at pace. I also found there to be pretty good rider feedback at slower speeds. The ZX10 really earns its legendary Ninja status in the handling department, the bike weighs in at just under 200kgs dripping wet, but turns in really quickly and changes direction with very little hassle.   The standard Showa suspension on the Ninja tackles the rolling bumps well, both over those nasty braking zone bumps on track and on those horrendous Harties breakfast run roads. I managed to do the Sunday run and climb off the bike with all my sensitive bits intact- which is quite important when trying to maintain or earn some biker street cred- walking into your local watering hole.

On the Brakes
Up front Kawasaki has stuck with the Tokico radial mount calipers which fasten onto 310mm Petal rotors. I found the brakes were consistent under track conditions, normally on the shorter tracks you tend to cook the brakes as there is no time for them to catch a break and cool down, but I didn’t really pick up any fade, even towards the end of the sessions. The 2015 Ninja carries ABS (Kawasaki Intelligent Anti-Lock Brake System) in its arsenal and it really works like a bomb. As I clicked off the laps I did find myself pushing a bit more and more until I was a little too fast, giving myself one of those ‘OE KOEK” moments which helped me discover just how well the Abs work (KIBS) . The ABS system is designed to keep you braking securely and ensures you maximize your braking to keep you smooth and fast. This reduces those tense, heart stopping moments where you freeze up on the bike while running out of talent. 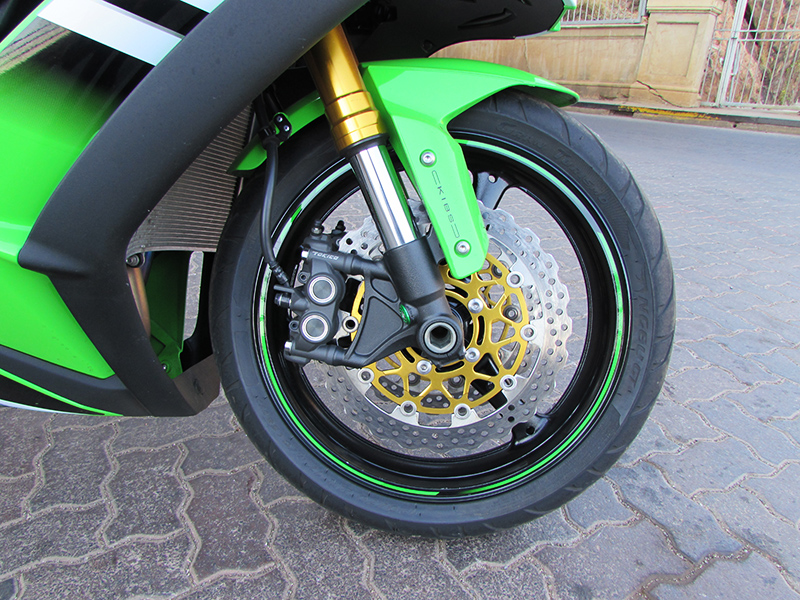 Making the Rider look good
As mentioned earlier the Ninja comes out with the Traction control (Sport-Kawasaki Traction Control S-KTRC) which offers 3 different modes of traction and the ability to switch it off if you’re feeling a little suicidal on the day. The bike also has 3 power modes so the pilot has a few options he can set the bike to- depending on conditions or rider skill. I played around with all the settings on the bike which is really simple to do but found that if running full traction in rain or sleeping beast mode, the power delivery was more docile than a 600. If you are a relatively inexperienced biker you could skip the rider progression route and climb straight onto on a ZX10 (not recommended- but definitely possible). The Abs and the slipper clutch also deserve a mention as these aids really keep the bike rideable in all conditions and situations. The slipper clutch was very impressive for me, if you find yourself carrying too much speed, coupled with some over enthusiastic downshifts, the slipper clutch just keeps everything in line and nothing goes out of shape in a hurry. I had a few instances where I just completely over did it on the downshift and never experienced any wheel hop, nor did I struggle to settle the bike down or run wide which gave me total confidence entering into corners, both on track or on the Harties roads. 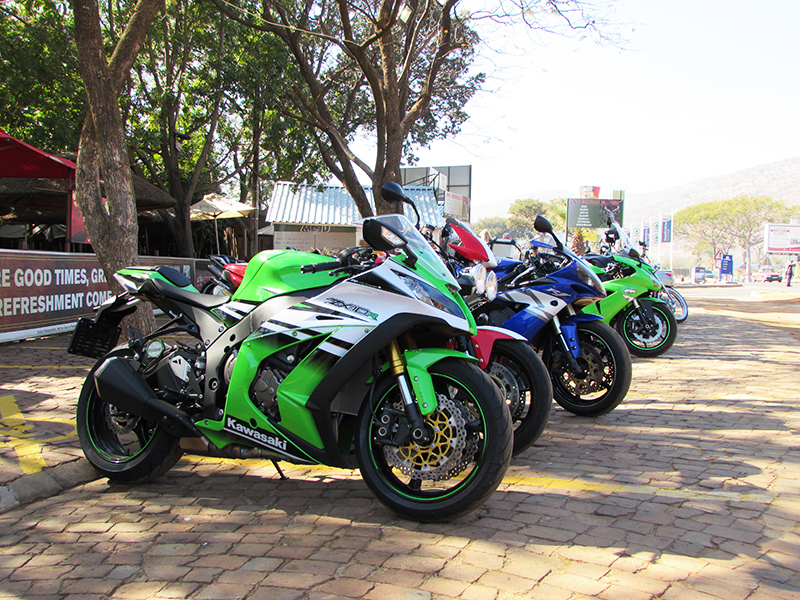 Sold?
TheZX10 really impressed me and is something I would really consider doing battle with in the 2016 Thunder Bike racing series. I could almost say I am a converted rider but the only thing playing in the back of my mind is that there may be a new model available in 2016? If you are planning to race any Superbike you obviously want to be on the latest, with all the latest and greatest bits on it. The question is: How much better can it really be?

Summing up the Green Machine
Buying a bike really depends on what you plan to do with it. If you are looking to tour South Africa then the Kawasaki ZX10R probably isn’t really the best choice as the seating position isn’t ideal and the long road will seem longer- even at high speeds. But if you are a racer, track day enthusiast, aspiring racer or even looking to save a few bucks on buying your mates breakfast or beers by not being the last one to arrive at the pub or Café, then the ZX10 is what you are looking for. Even though the model has been around for 4 years now, it’s no wonder why so many people are riding them at track days or racing them at club, national or international level. The bike is a phenomenal package and is still extremely competitive on the world racing stage, as well as a front runner off the showroom floor. There aren’t a lot of modifications needed as the bike is really good already. As I mentioned with regards to the Kawasaki being one of the first of the manufacturers to join the Magical 200HP club, most of the competition have since followed suite, but at a price. Do they do anything that much better to justify their price tags? Or is the Kawasaki just excellent value for money? 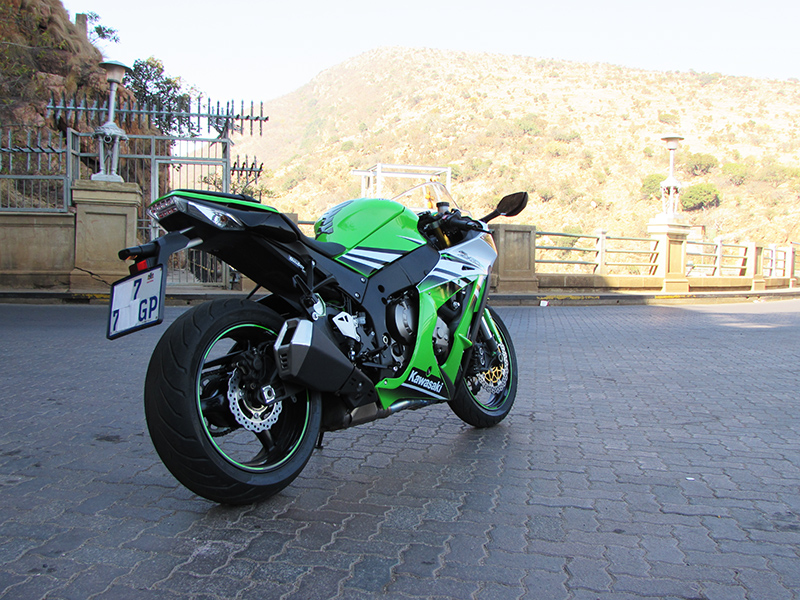 Looking at everything from top to bottom.. how can you not go Green…..?