It is probably fair to say that Ducati was really put on the map in America by their bevel drive overhead cam Scrambler, introduced in 1962. By the time production of the Scrambler ceased, the engine had grown in capacity to a 350cc and eventually a 450cc. If you think that the 399cc Scrambler, introduced in the wake of the 803cc version, is less of a bike, perhaps you should think again.

The ’62 is way more in keeping with the original. Narrower rear wheel and higher handlebar is distinctly more Scrambler than the 803cc, which is more “Flattracker” in execution. On the ’62 the tank, a 0.4 litre larger than its sibling, is very reminiscent of Ducatis original 250. The right side of the bike has a cleaner, less cluttered look with a way simpler and neater exhaust system. The stubby tailpipe is black, matching the cambelt covers on the motor. The swingarm, with tubing reinforcing the swingarm proper, is also black. 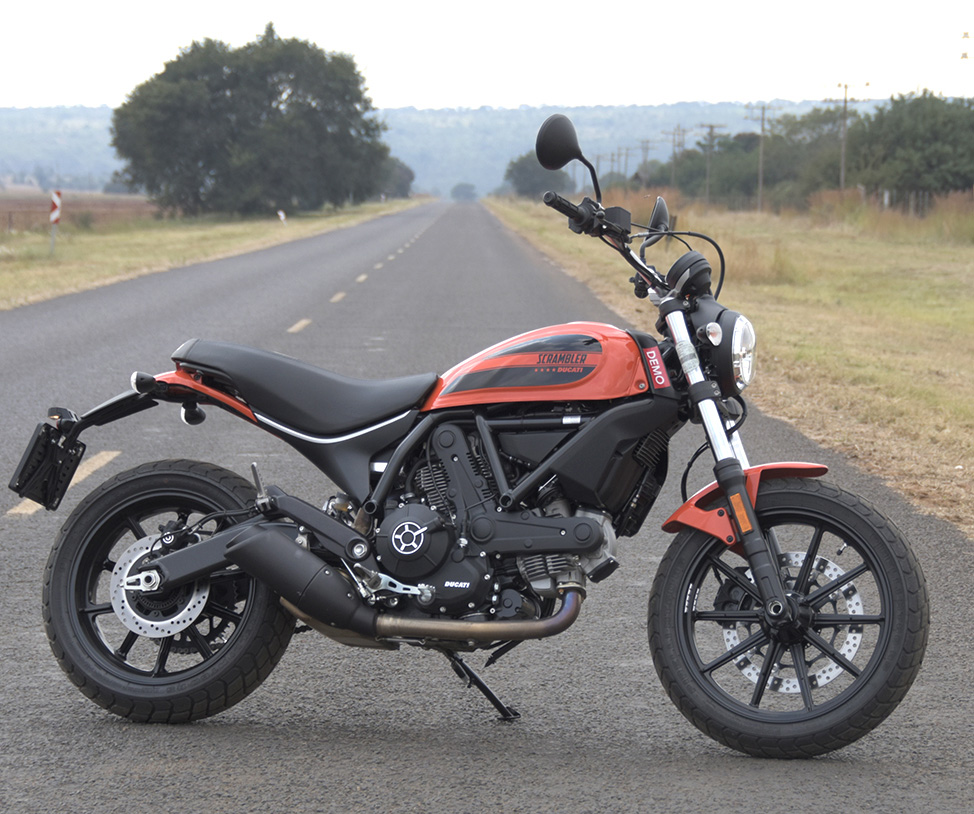 Suspension on the ’62 is by Kayaba. Supposedly cheaper than on the 803, but it works superbly. Budget suspension is often found wanting in the damping department but not so with the ’62. The suspension soaks up gnarly roads with aplomb – firm yet supple. In my opinion, it is every bit as good as big brother.

The single offset round “clock” is digital and it really tells you all you need to know. Odometer, trip A and B, digital speedo, time clock and the same strange, right to left, rev counter – also digital. It also has a “Low fuel warning light” and even a “sidestand out” warning. It’s all there. The round, yet modern headlight integrates neatly into the front end and throws a decent bright beam. 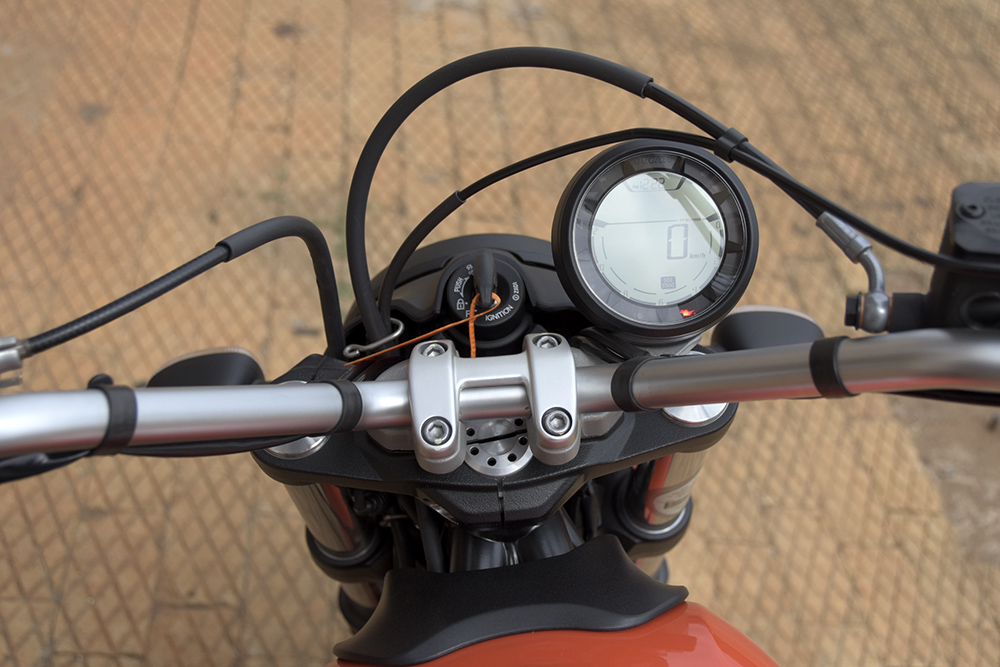 I have purposely left talking about the engine towards the end. Here’s why! South Africans seem to be somewhat speed and power obsessed. Current road conditions however, are not conducive to really using excessive power and speed. You end up having to ride your fast bike slowly. Enter the ’62. The smaller capacity motor only makes 57% of the power of the 803, yet the way it does it is really entertaining. Torquey enough to be able to short shift if you aren’t in a hurry, the motor gets a surprising hurry up if you rev it to the 8750 rpm limit. In a slight crouch it will run 160 kph – not too shabby for a 400. 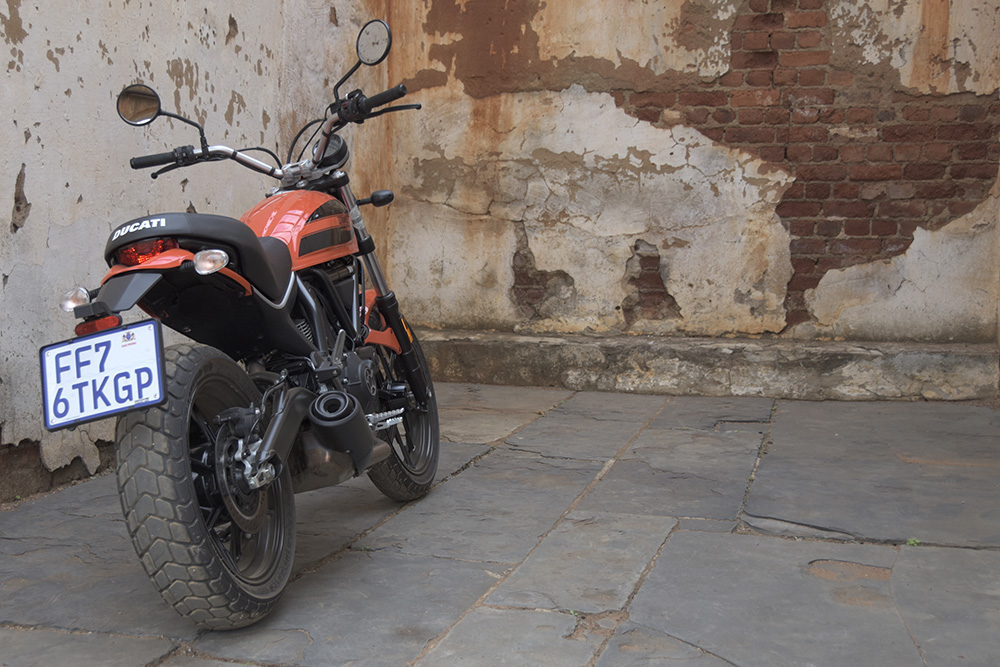 What is difficult to put a price on is the undeniable “cool” factor of the Scrambler Ducati’s. Neither model has any indication of motor capacity, so the street cred of the “small” bike does not get diluted. Given that naked bikes work wonderfully in the urban sprawl and top end is not so relevant, the ’62 makes lots of sense. For me, the ’62 is an absolute blast! I want one!! A modern take on a classic original with engine capacity that is also more in keeping with the legend. If you are a true enthusiast rather than just a speed and power junkie, you need to be on a ’62. Prepare to be Scrambled!

2nd Opinion:
Given the easy-going nature of the ’62, it lends itself to new riders and ladies, who find the low seat height and weight, confidence inspiring. We asked Ruby van Rensburg, who is an accomplished off-road rider but by her own admission, intimidated by roadbikes, to ride the Scrambler and give us her opinion. Here it is 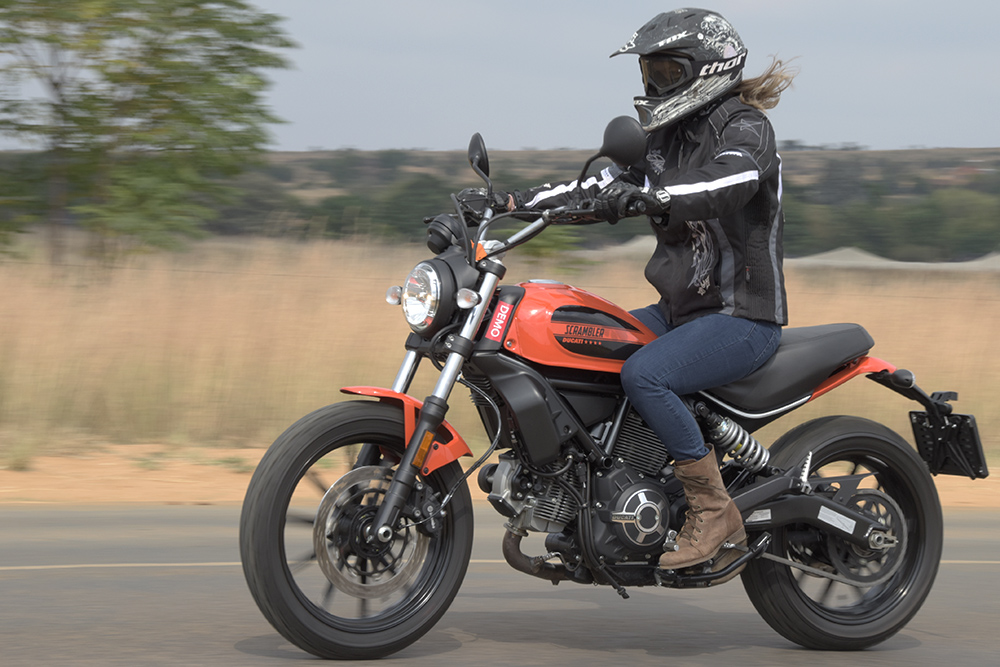 The design and styling of the bike has that old school vintage look, something I really like. Given the option to accessorise the bike and purchase rider gear to match is something that got me interested in the Scrambler long before I had the opportunity to ride it.

The seating position on the bike is great. Although I am quite short I found it easy to place both my feet on the ground at a standstill. The scrambler is exceptionally easy to ride. It is light, easy to handle and made me feel confident when negotiating tight turns at low speed. Previously I have been put off by road bikes because they can be intimidating based on size, weight and power. The scrambler is quite the opposite.

Power delivery is smooth through all six gears, with a decent amount of torque from low to mid-range. The power output is not intimidating but enough to have a fair amount of fun. You will feel the need to gear down when overtaking out on the open road but there is enough torque on hand for leisure riding, solo or with a passenger. 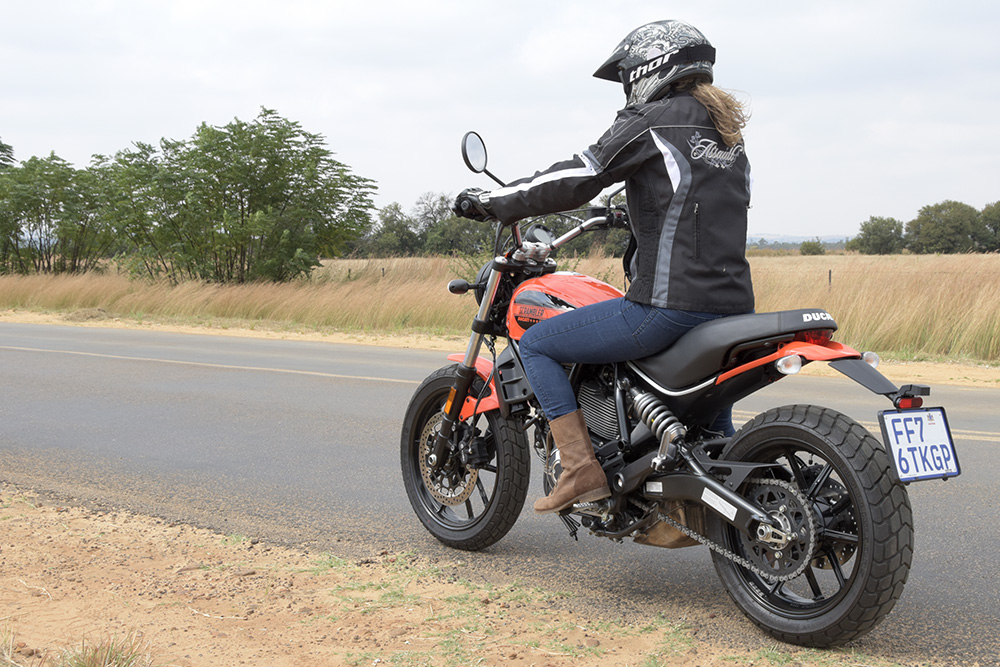 I would love to buy myself a Ducati Scrambler 62. The total look, comfortable ride and power distribution makes me feel confident and at ease with the bike. It’s a rad bike and a head turner of note. It makes a person feel young and reminds you why we fell in love with bikes in the first place. Despite the cool factor it’s also really good on fuel economy. In my opinion the best stand out urban traveller available. 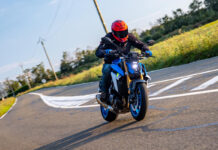