I suppose the idea germinated whilst in the company of some Adventure bikes at the top of Sani pass. They were somewhat miffed at the ease with which Social shot up the pass! “Real adventure bikes travel far and wide, conquering sandy tracks and riding desolate plains like the Makgadikgadi in Botswana”, they said. “You need a big engine and big, 19 or 21 inch wheels like us”, they said. “You could never manage that”, they sniggered. 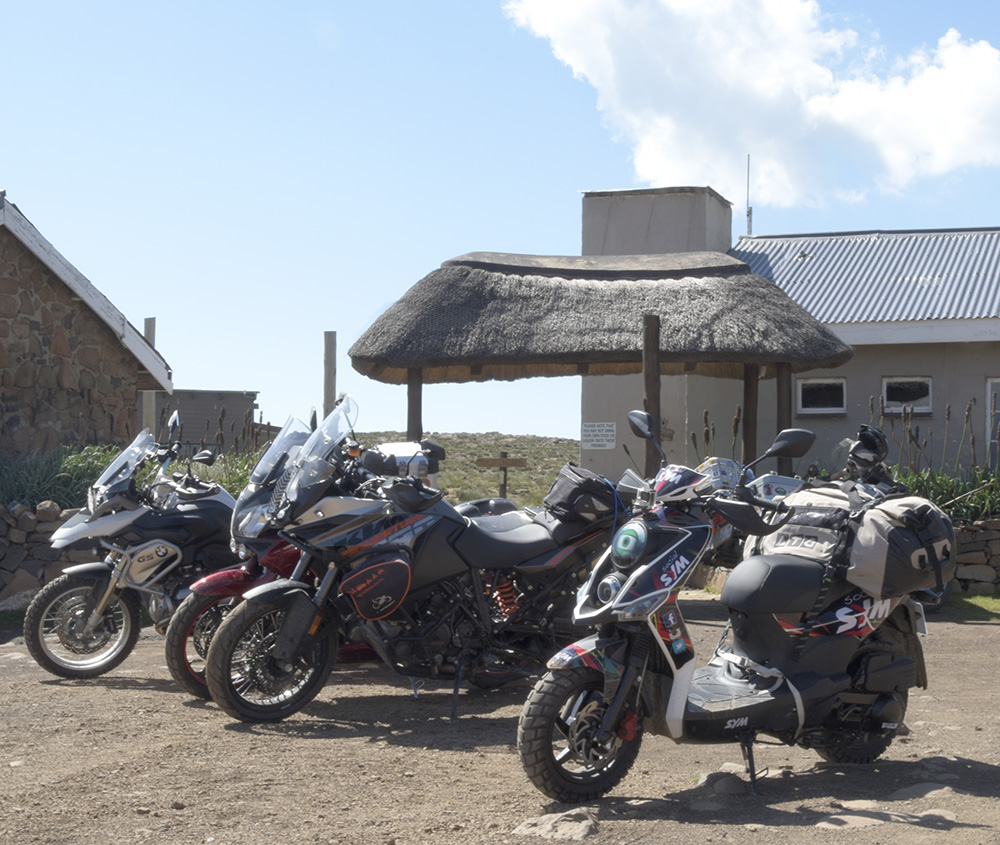 Being a modest fellow, Social said nothing; however that heart of a lion under his funky bodywork started idling a little faster as an idea was birthed. He would conquer those far away challenges and prove that just because you are little you can still dream big! If you are properly built, by people who care, you are up for any adventure.

So it was that on a day, he travelled north to a place called Nata in the wild and wonderful country of Botswana. 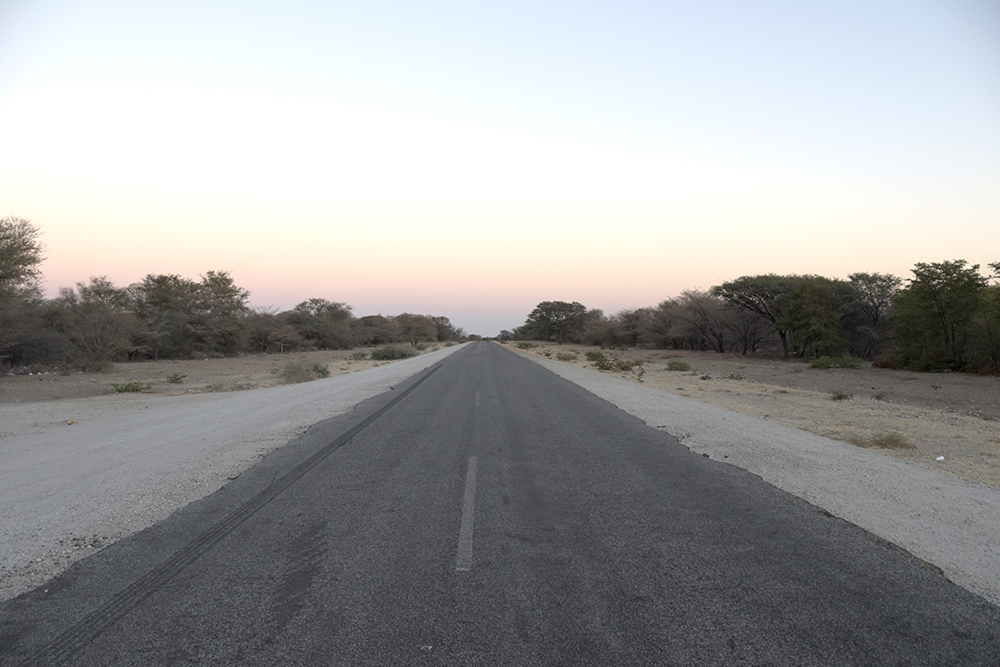 Deep sand tracks would take him to the fabled Makgadigadi pans. He was a little apprehensive. Those deep sand tracks through the Mopani trees are hectic! Many big Adventure bikes have tried and failed, their riders falling off and lying exhausted in the sand, too tired to continue. “My wheels are small, but they are quite wide, so I will make my front wheel a bit softer, say 1.6 bar and I will go where others fear to roll, he said with resolve”.

His big day dawned and he rode out under an endless blue Botswana sky. Tank full and a 5 litre fuel bladder hanging from his parcel hook. Off the tar road and the deep sand track started immediately. There is only one way! Throttle wide open and you can’t lose! The track twists and turns every few meters through the Mopanis. The sand did its best to stifle his progress , but full throttle saw the plucky little scoot flying along at a pace that would have left the average adventure bike floundering. Really light weight and a torquey little motor saw Social SYM running on top of the sand like a little beetle, with the rider hanging on for dear life! 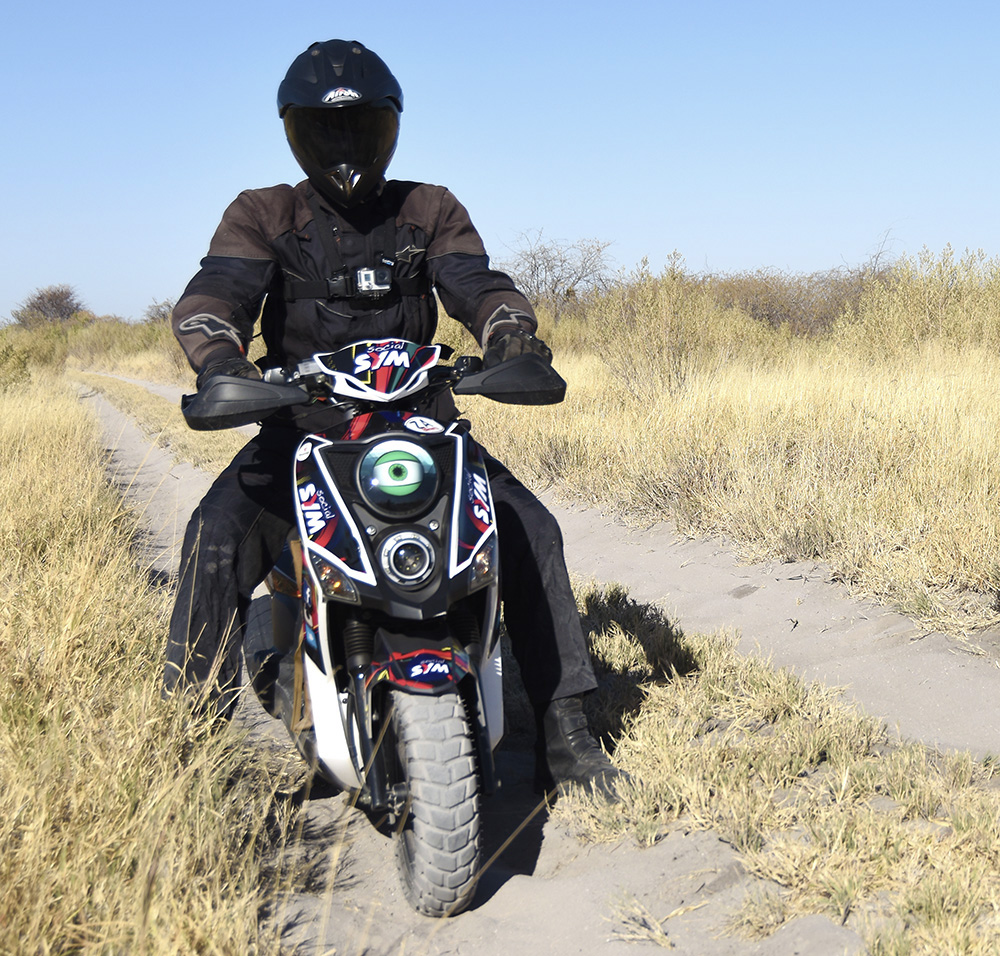 The pans, oh the pans! Suddenly the track opened up and before Socials green eye gaze lay the endless pans, stretching out as far as the eye can see. With an excited toot of the hooter, he bounded forward. Amazingly there was water on the pans, remnants of early winter rain! 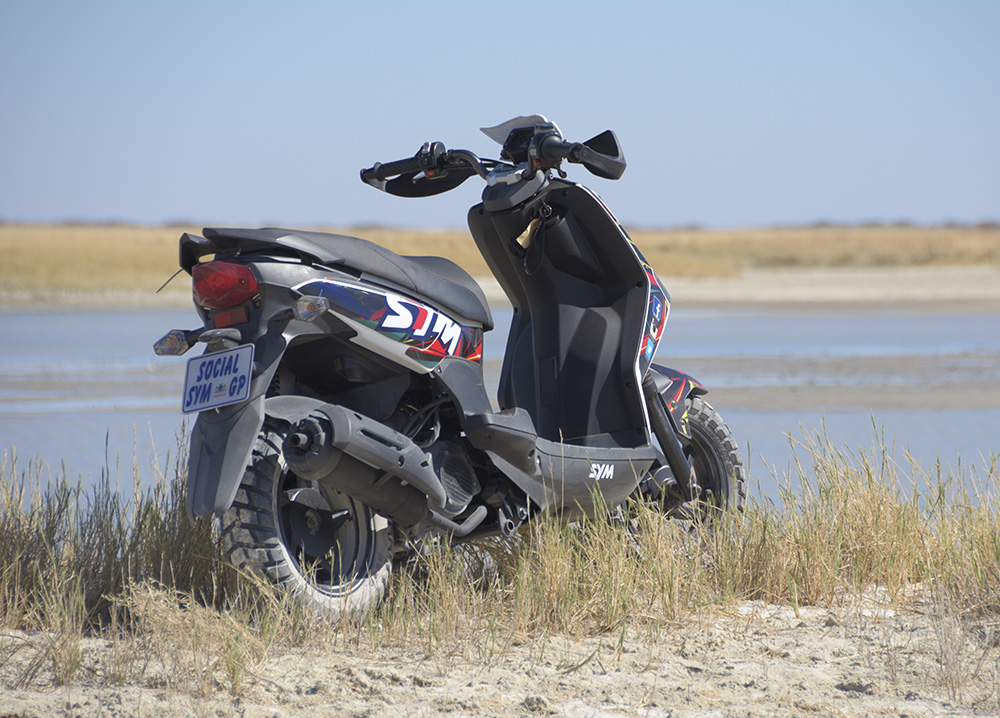 Drinking from the pan was a large herd of magnificent wildebeest. Like a Jack Russell after a ball, Social SYM streaked across the white pans to take a closer look. Not being accustomed to funky scooters appearing out of nowhere, the startled Wildebeest snorted, tossed their heads and wheeled about. Social found himself rolling across Botswana’s Makgadikgadi accompanied by more than forty free roaming Wildebeest. Not wanting to spook the herd, he kept his distance, and then turned around to retrace his tracks.

Once again Social proved that it is not the size of your ride that counts, but rather the size of your sense of adventure! 50 odd kays north of Nata, Social turned into Elephant Sands for a bit of well-deserved rest. Watching the sun set on another perfect African day, this time in the company of around a dozen huge African Elephants drinking in front of the lodge, Social revelled in his latest adventure. 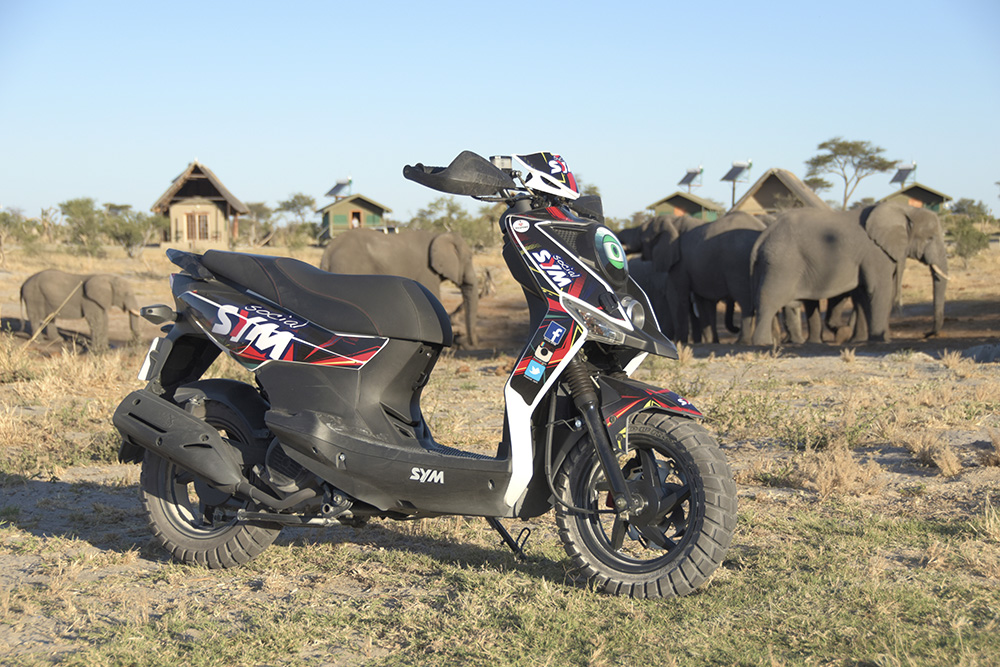 The “Kalahari Surf Club”? Planet Baobab? I have to see it “said Social, so off he went. What a place! 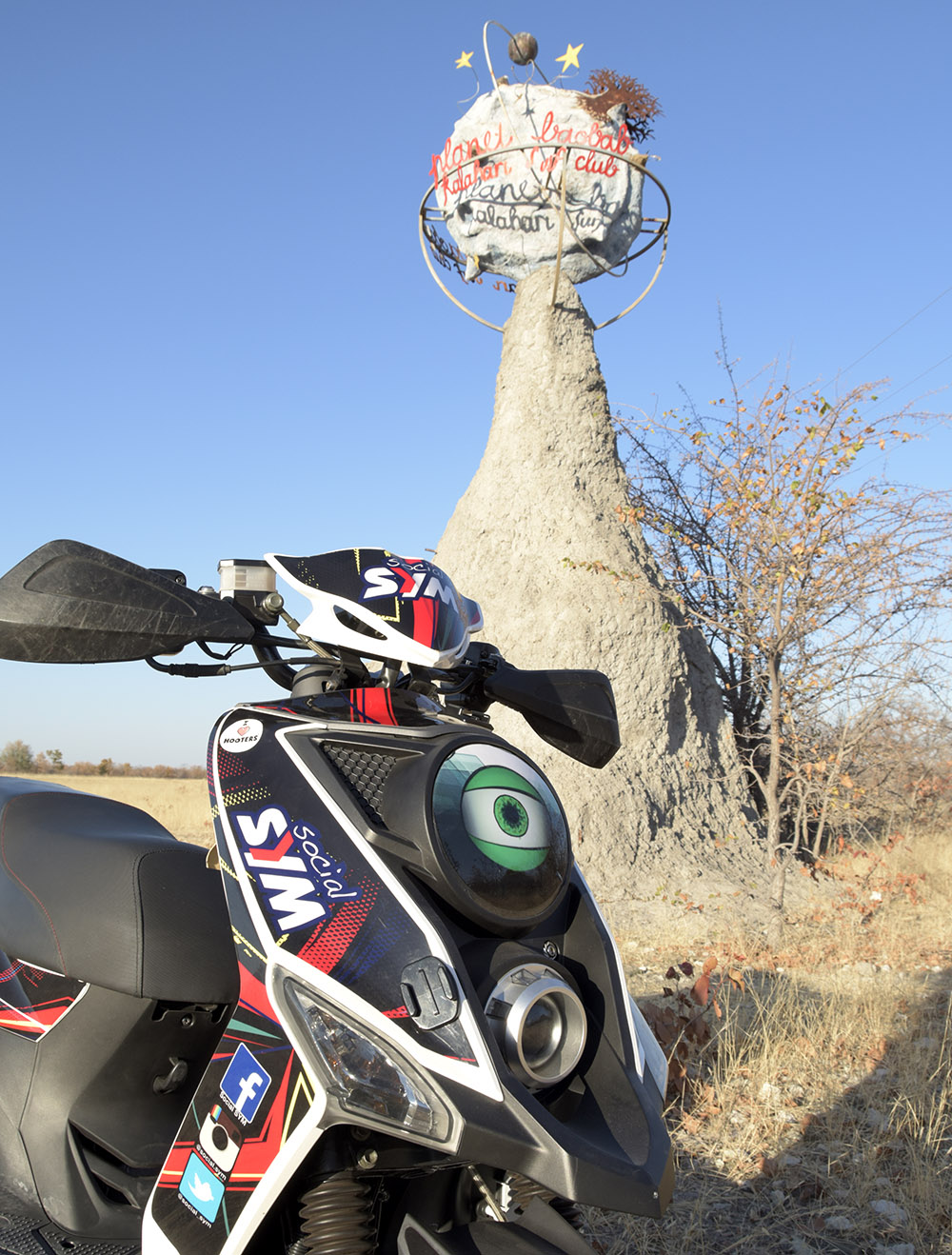 The huge red glowing Baobabs, baking in the setting sun, served as a perfect backdrop to our intrepid tiny traveller. 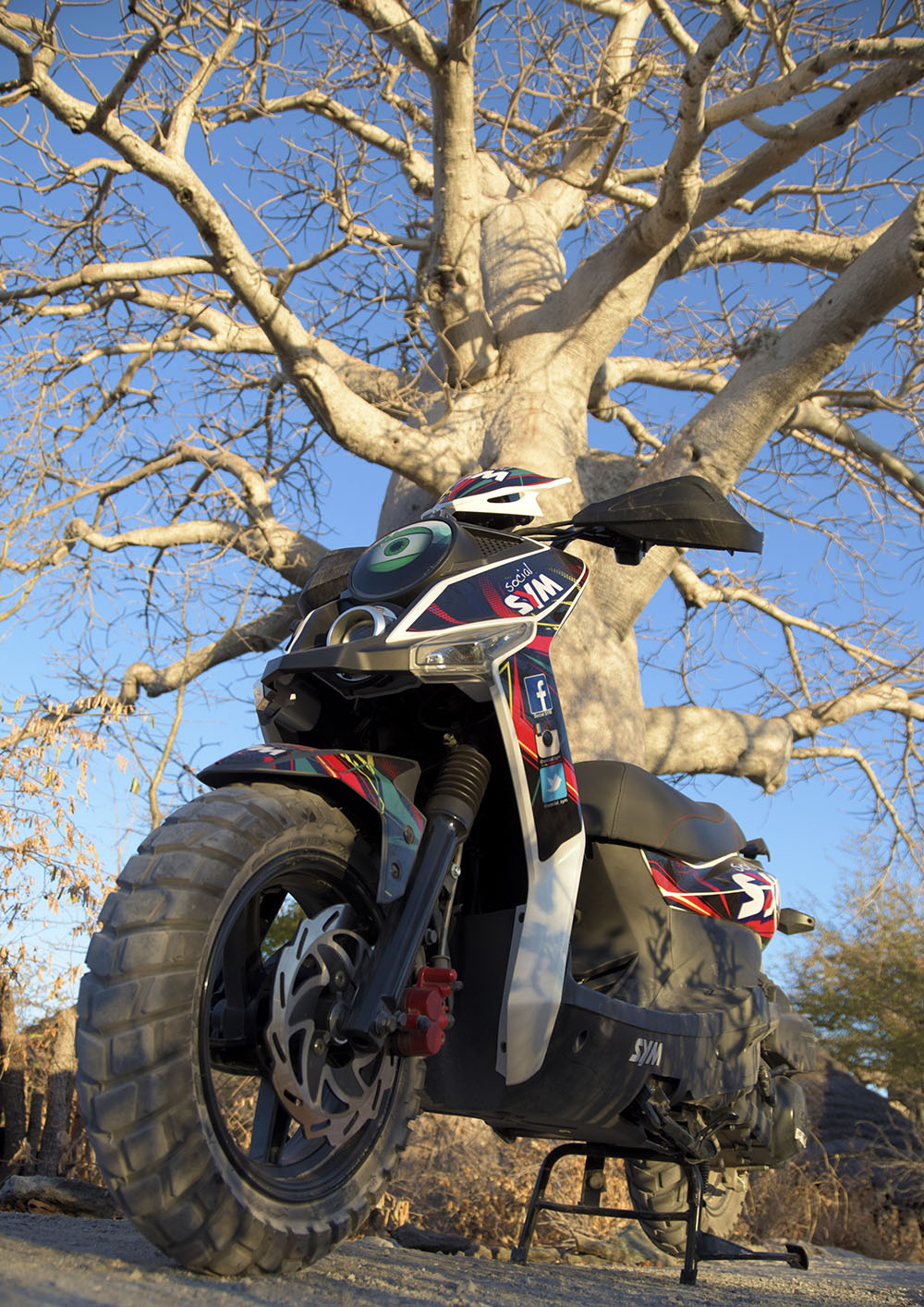 The smirking big adventure bikes would get really hot under the handlebar when they heard of his latest exploits. If he told them they would probably never believe him . Luckily he has the photos and video’s to prove it!

To find out more about SYM Scooters… CLICK HERE <<