It seems as if the more we look forward and advance the technology of motorcycles, the more we look behind us for inspiration. The modern craze for ‘retro’ bikes is well and truly upon us and what was once the preserve of the home mechanic toiling away in his garage to create something individual has been annexed by the manufacturers who are now offering those very same customisations as production models.

Triumph were the first to look back when they introduced the new Bonneville range in 2001. It was the success of this bike, so clearly a pastiche – albeit a good one – of its famous forebear, that set all the other manufacturers thinking and, while they were initially slow to catch on, once they did, the floodgates opened.

In all fairness, the Yamaha isn’t really a ground-up new model, as are the others, but a styling job on an existing platform – that being the MT-09 – and this is no bad thing. The MT-09 is a fantastic bike with a great engine in a great chassis and the nature of the model was such that it lent itself to a makeover perfectly.

If anything, in the MT-09 and the later MT-07, Yamaha already had two bikes that were slightly retro in conception and appeal. Both were naked bikes that fell short of being full-on sports bikes but which were also much more than mere commuter jobs.

The versatility of the MT-09 package was illustrated when Yamaha launched the MT-09 Tracer, a touring orientated version with more wind protection and so on. Now, the XSR900 is trying to tap into the craze for all things retro and the question is; does it work?

The answer is, of course it does. Being a mere styling job on an existing bike means that none of the capability of the donor bike is lost. Whether it is the bike for you is purely down to personal taste; do you have a soft spot for Yamahas of old or not? If you do, then this is definitely the bike for you.

The main styling difference is in the petrol tank; it now resembles, in both shape and the lettering on it, tanks on old RD two-stroke Yamahas and, seeing as these are some of the best remembered models, Yamaha have done well to resurrect the style. 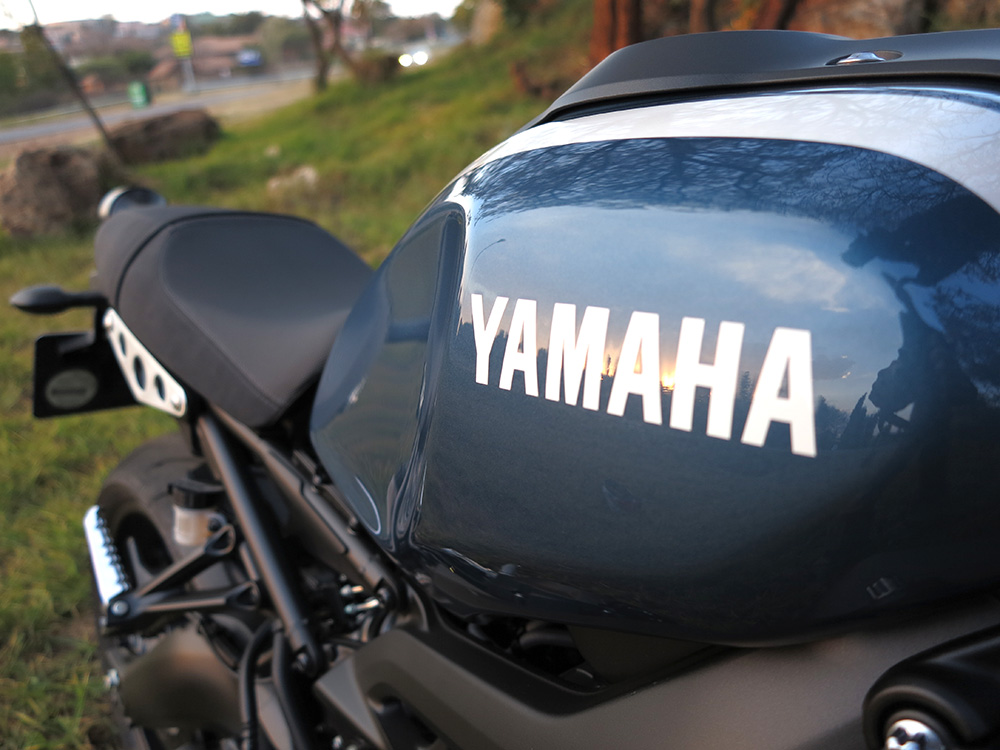 Opt for the yellow and black colour scheme lifted from Yamaha race bikes of the seventies, and you have something that looks as good as it goes. 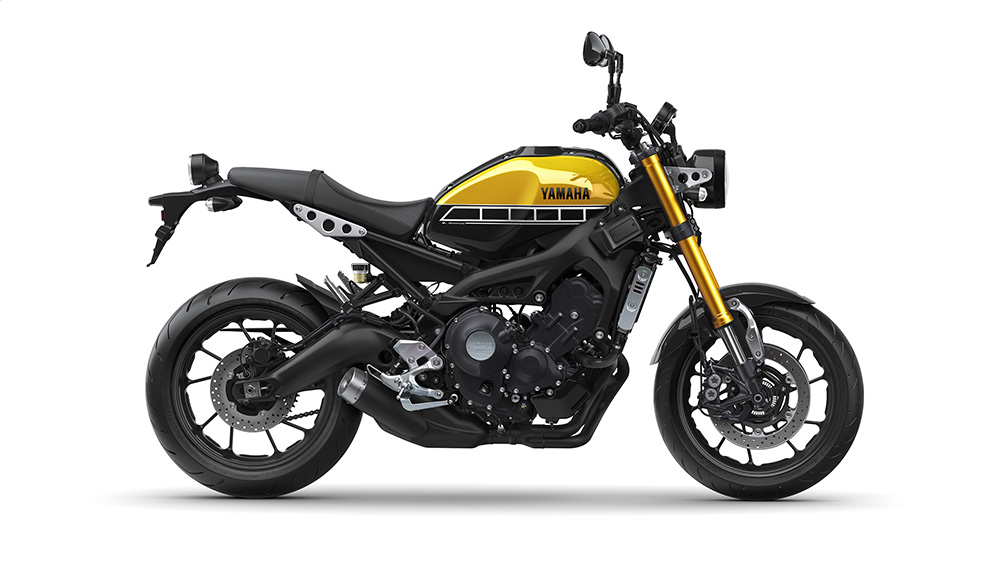 The bike on test had the optional dusty blue colour scheme and, while not being as striking as the yellow and black, it still shows off the lines to great effect. The only other splash of colour is on the headlight shell and I can’t help thinking that it would have looked better in chrome. But it’s a small point not worth getting worked up about.

Other nice touches are the headlight bracket, which is a drilled aluminium casting, aped by a frame ‘bracket’ beneath the seat; small touches that lift the appearance. 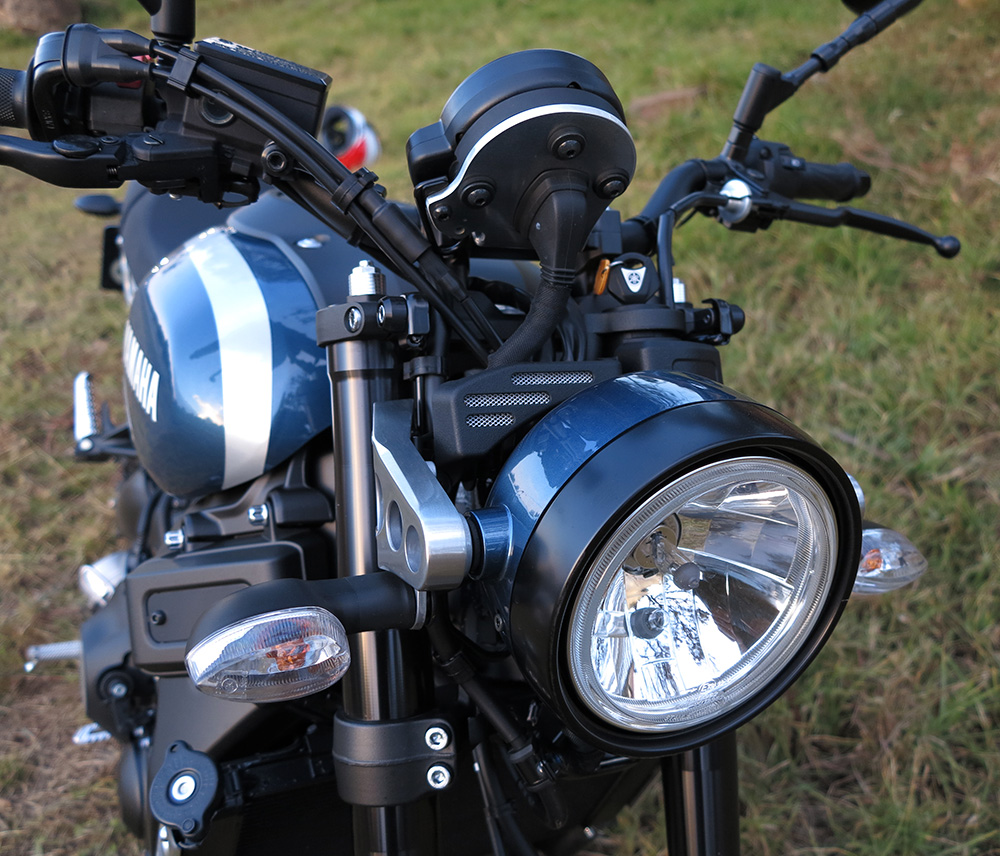 The single clock is straight out of the good old days but is, in fact, a very modern instrument, being fully digital and containing all the information you could possibly need. 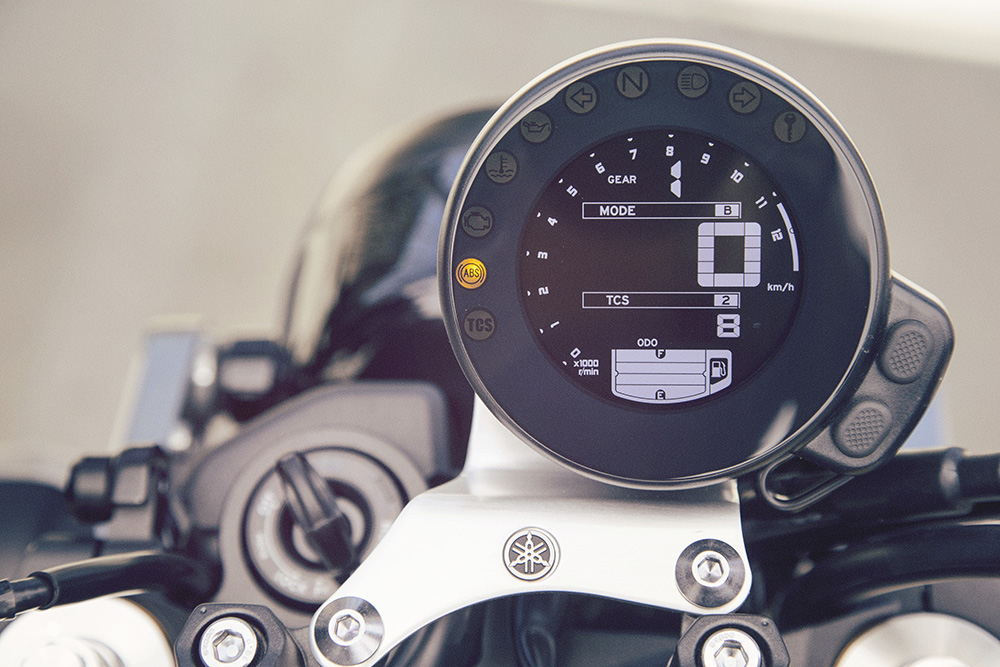 The only jarring note is the rear light. It may match the speedo in shape but it is mounted in a very vulnerable place, sitting right on top of the rear mudguard; it is easy to imagine it falling victim to a carelessly thrown-over leg getting on or off the bike. It’s not unattractive in itself but possibly it could have been a bit better integrated into the rear styling. 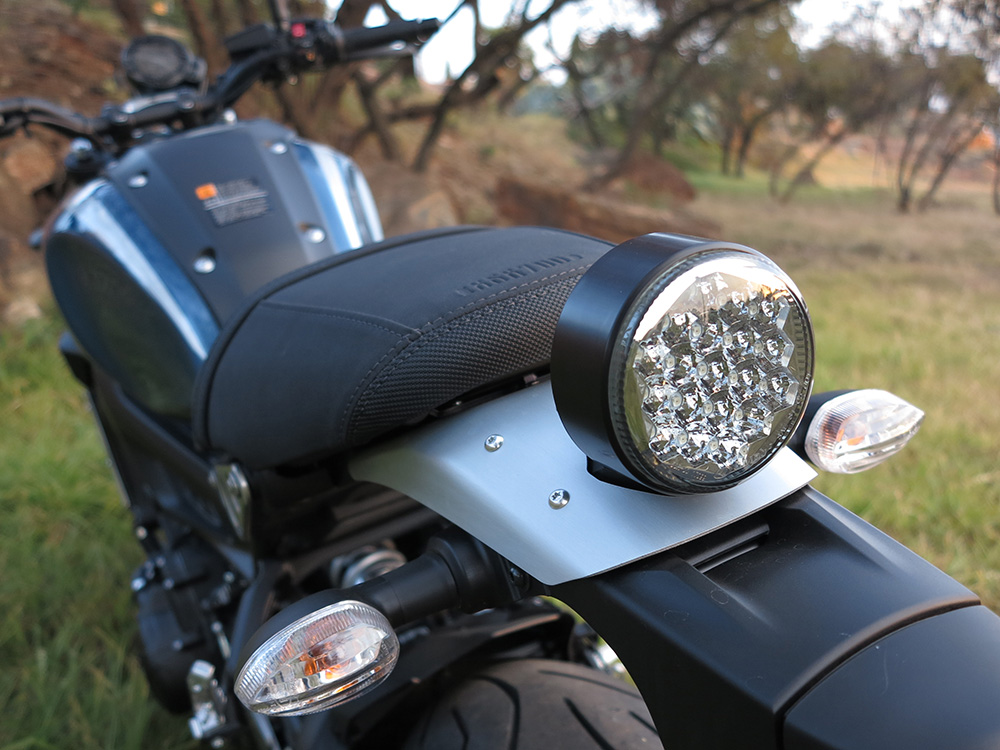 On the road, the XRS900 is anything but retro. BMW have kept the air-cooled boxer-twin in production for the RnineT long after it has ceased to be used in any other bike in the range and Triumph have the parallel twin and, while both are modern, updated versions of those engines, they don’t exactly represent new thinking in engine design.

The Yamaha is bang up to date and the triple-cylinder motor is as sweet an engine as you could wish for and gives the XSR distinctly modern performance, with an equally stirring and up-to-date exhaust note. I’ve always been a fan of triples and the Yamaha’s is at once throaty, lusty and smooth; the best of a twin and a four in one. Yamaha have fiddled with the ECU to give a little more low-down torque. 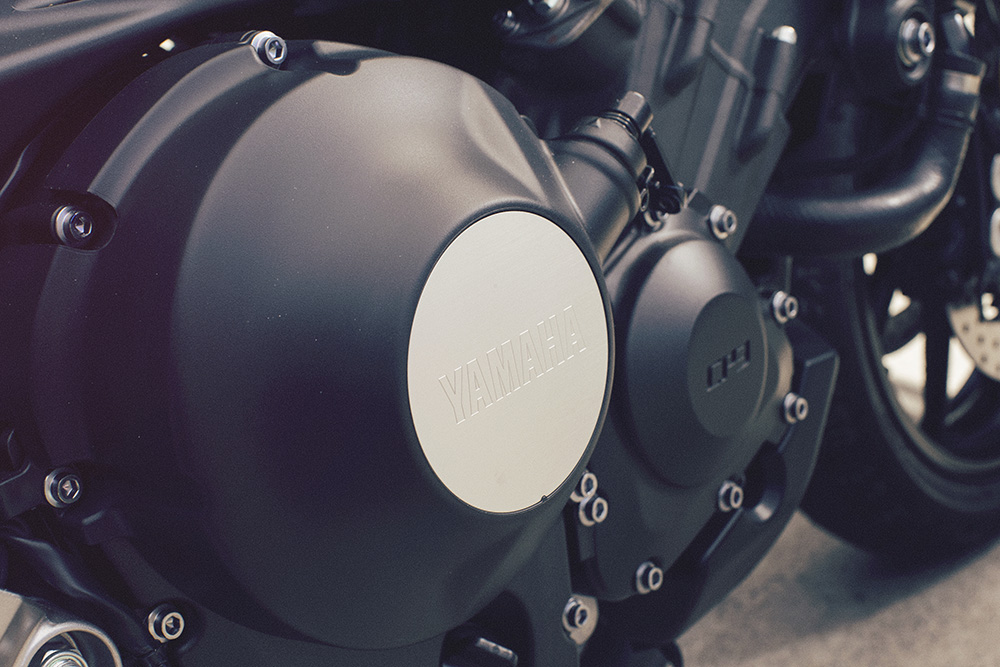 The chassis is as you would find it on an MT-09, although Yamaha have tweaked the suspension settings a little, to allow for slightly less weight; the MT-09 was never as harsh as a sports bike, with a perfect balance between comfort and handling and the XSR is no different despite the subtle changes. ABS and traction control are present alongside three riding modes, which don’t affect the power output but rather the throttle response. Quality of everything is typical Yamaha which translates as very good indeed.

The whole thing about retro bikes is that the concept is not necessarily about out-and-out performance or practicality. It’s about appeal, style and how it makes you feel. Even the look of a bike when walking towards it is important as it either makes you want to get on the bike and ride or it is merely a means of transport with no passion attached whatsoever. I never once approached the Yamaha with anything but anticipation.

The problem with many home-built customs or café racers is that they look like a million dollars but can be pretty awful to ride. The new breed of factory customs get over this nicely; you can sit and look at it and derive a great deal of satisfaction or you can swing a leg over and get even more satisfaction.

By going the modern-bike-with-a-styling job route, Yamaha have worked the best of both worlds into the XSR900; whether you look or ride, you won’t be disappointed.