Almeria, South of Spain, is definitely the place to be these days. Within a couple of hours after the launch of the Ducati Scrambler Desert Sled, a group of bike journalists were invited to test ride the new Kawasaki Ninja 650 and Z900, and then asked to come back for the launch of the new BMW R 1200 GS Rally.

But this review is about the little Kawasaki, so let’s start with a brief history lesson. Back in 2006, Kawasaki introduced the Er-6n, taking over from the Er-5, which was just about good enough to pass a bike licence and deliver pizzas. The Er-6n had a funky look, funky colours (remember that yellow?), a sparkling in-line twin engine and the ability to satisfy beginners as well as experienced bikers. 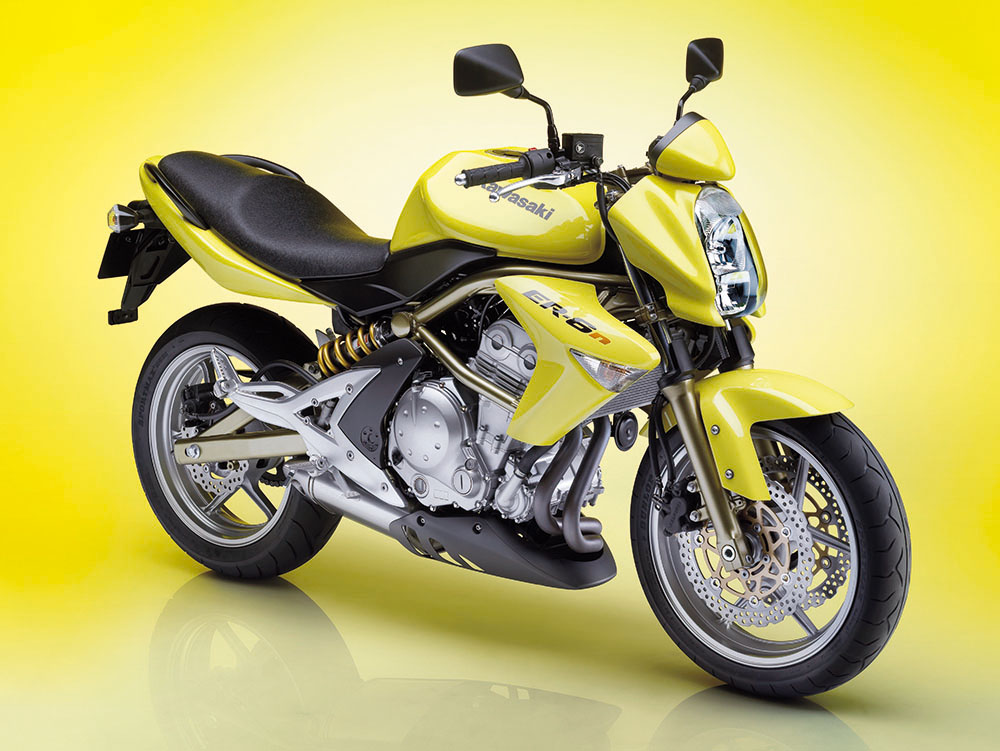 Not long after, the Er-6n was followed by the Er-6f and its fairing gave it more versatility; if not touring, at least improved commuting abilities with some extra wind and rain protection. In fact, in some markets – notably the UK, USA and Germany – Kawasaki sold nine “f”-models for every “n”-model. 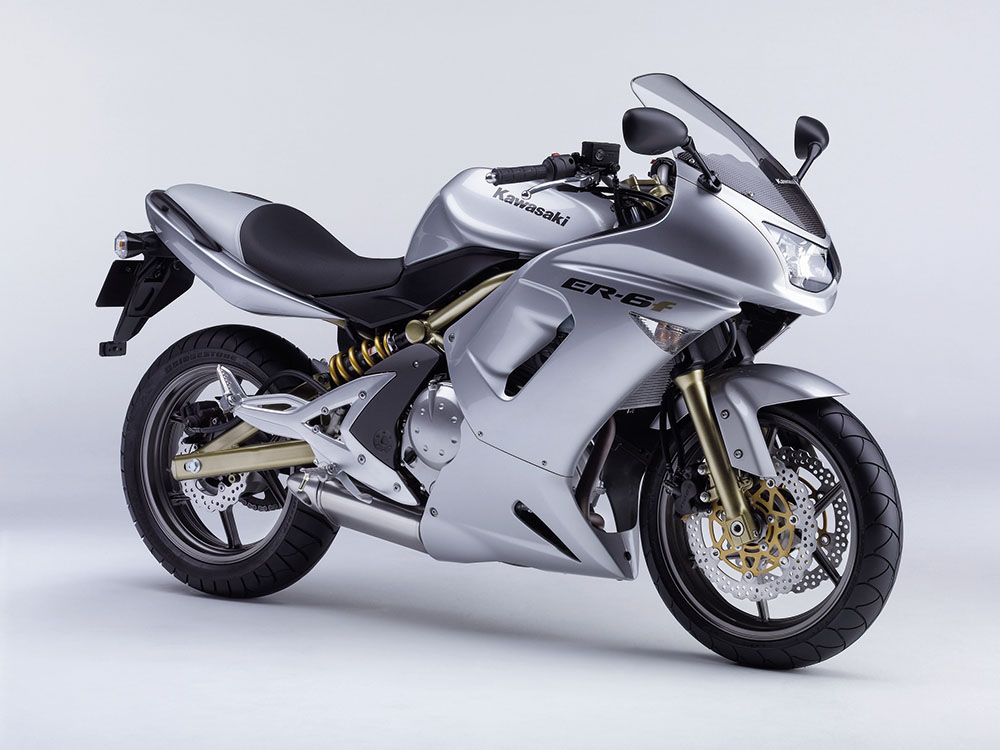 For 2017, Kawasaki decided to open the marketing meetings to the guys working in the heritage department (note: if you pass by Kobe, Japan, treat yourself by visiting the “Good Times” Kawasaki Museum, it’s worth it!). And the heritage guys said: “Hey buddies, we have a great past, let’s capitalise on it.” 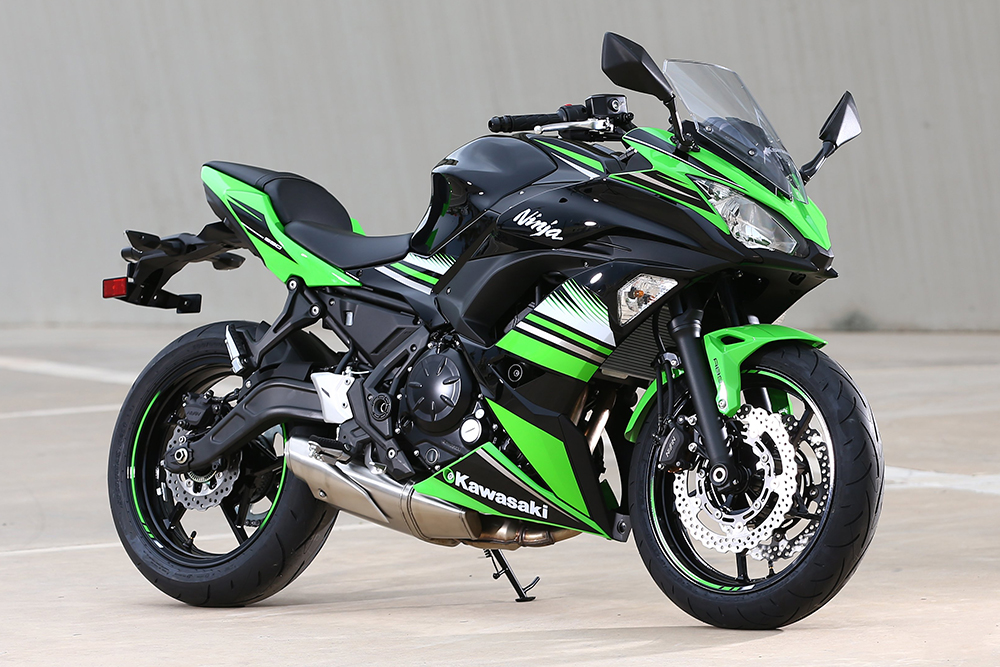 Actually, no. It’s much more than that. Or less, you could say. A whole 18 kg less. That’s a lot of savings for a bike’s dynamics. Obviously, the looks have evolved and the former Er-6f now looks more like a Ninja superbike – with its pointed front end and a tiny tail, it practically screams “Hey, I’m fast!” And if you like that, you might love the Kawasaki Racing Team colour scheme that is available along with the standard black and orange. 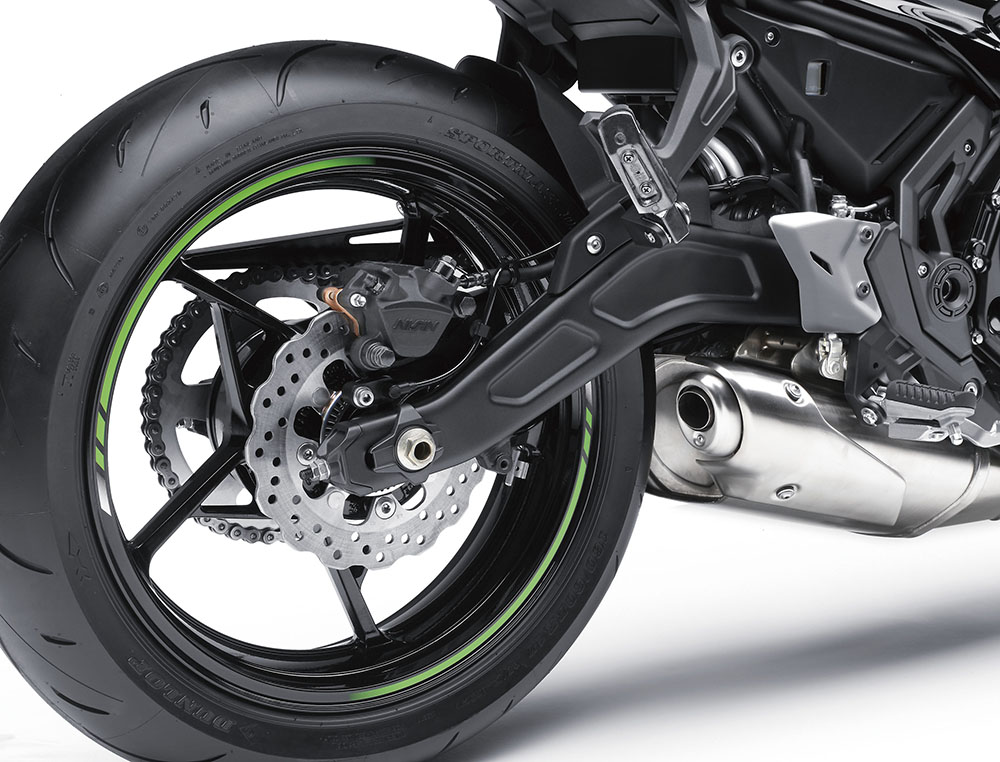 Smooth, easy to get along with, the Ninja 650 remains a bike suitable to beginners. The seat height was reduced from 805 mm to 790 mm. The rake angle went down from 25° to 24°, which should make the Ninja 650 much more agile than its predecessor. And yes, as I found out, it is. 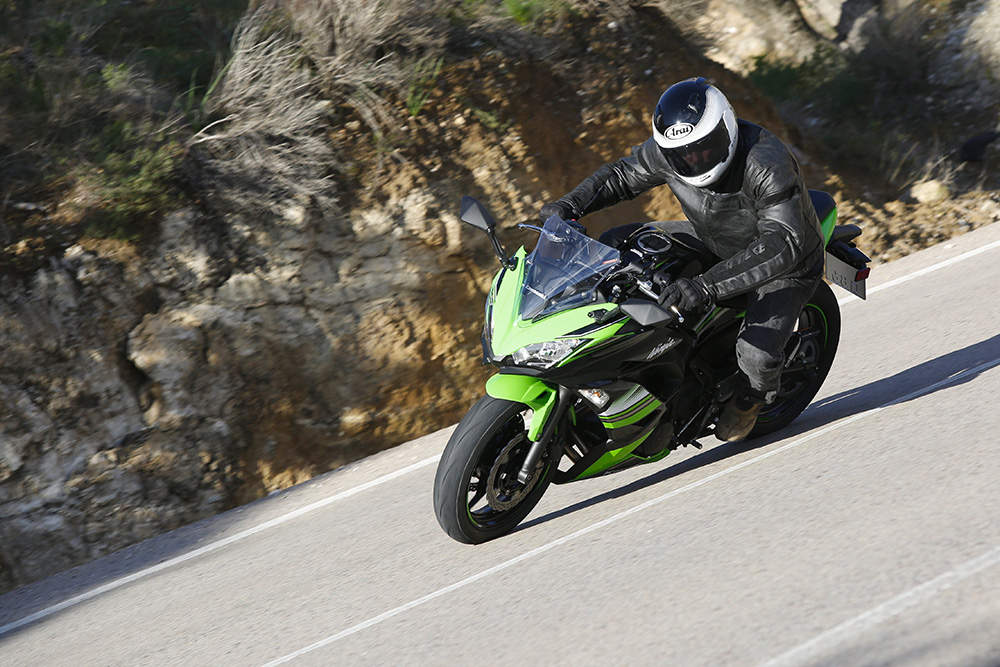 The instrument panel is also new. There is a gear indicator, a shift light that can be set from 5 000 to 11 000 rpm, a clock, as well as fuel range and average consumption displays. Not bad for a beginner’s bike. 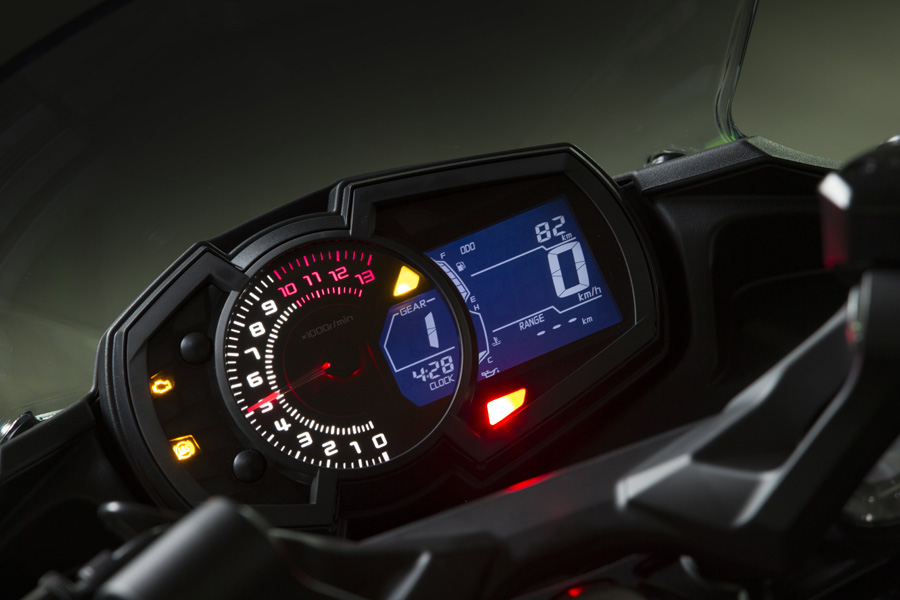 But does the sportier look make it sportier to ride? Actually not. Well, if you plan to be the pillion, maybe. But as a rider, the riding position remains reasonably neutral and your wrists won’t suffer as they would with a standard sport bike position. 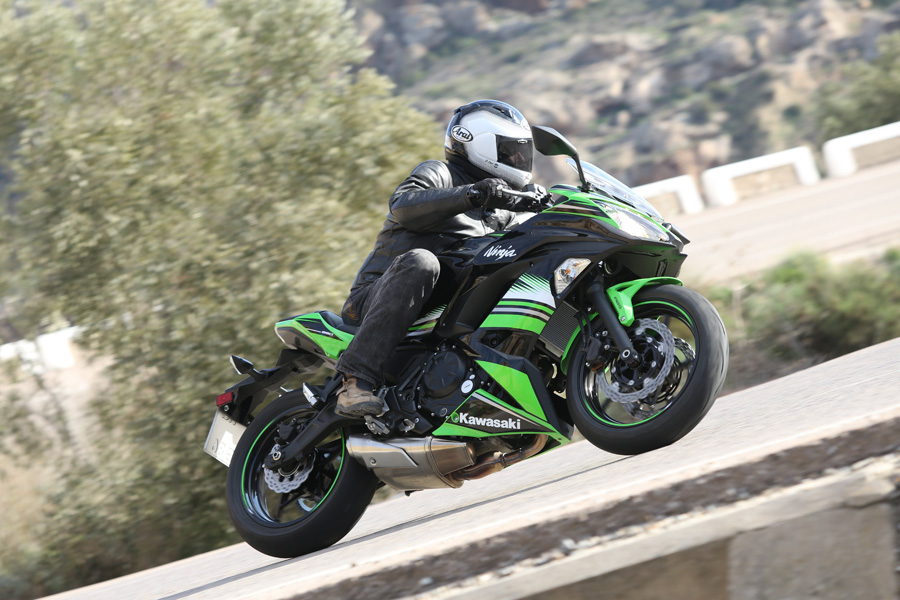 As the weight was seriously reduced, the power is not much of an issue. The Euro4 regulations required Kawasaki to make a few adjustments, and as a result, power output went down from 72 to 68 hp. Bad news! But the good news is that the torque of the new model is higher than its predecessor throughout the rev range. 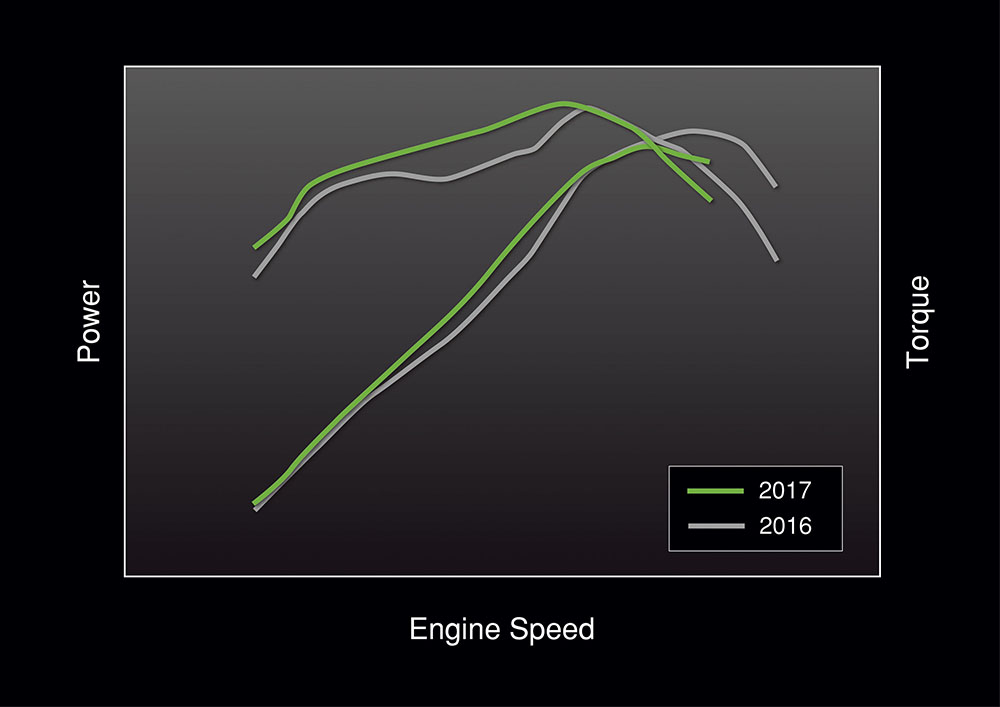 The engine character has been sweetened a bit: there are now less vibrations at very low revs and the Ninja is happy cruising in town at 50 km/h, showing 3 000 rpm in 4th gear with no hiccups. Power delivery is quite linear and the 649 cm³ motor delivers peak power at 9500 rpm, so there is no need to try and hit the redline. We experienced an indicated top speed of 200 km/h at 9 500 rpm in 6th gear on a “no speed limit” section of Spanish highway. Gearbox was faultless, whether gently cruising or thrashing the bike and forgetting about the clutch.

All that combines to make real life riding more efficient. So too does the new mapping on the fuel consumption: Kawasaki claims a 6.8 % improvement and an official 4,3 l/100 km figure. We managed 5.4 l/100 km while seriously thrashing the bike on the Spanish mountain roads, and that can barely be seen as excessive. So the 15 litres fuel tank should deliver a decent range, above 300 km. 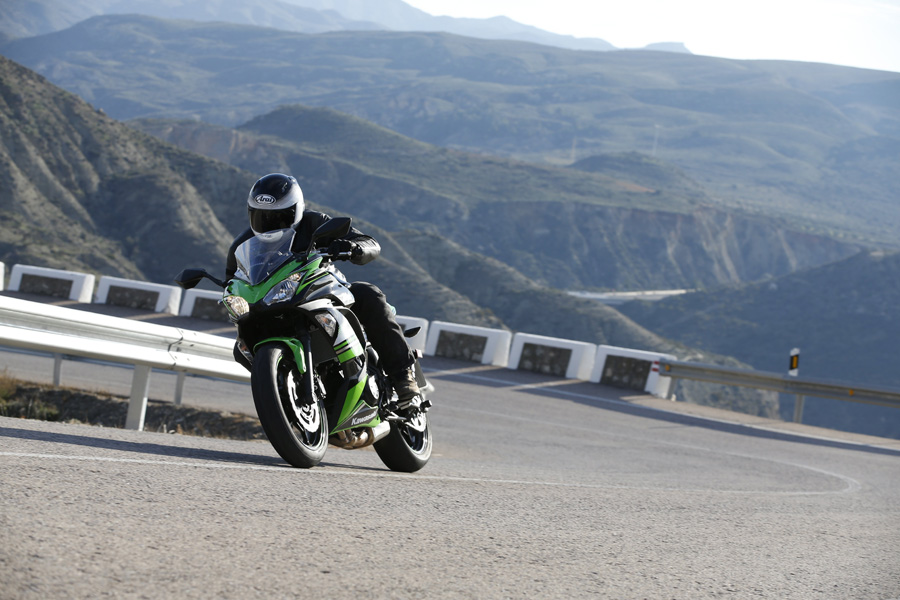 As the windshield can be raised up by 60 mm (4 screws and 2 minutes), the open road doesn’t seem to be off the books altogether. Your shoulders will be protected from the elements – your head, less so. Engine vibrations disappeared completely during highway cruising (5 600 rpm in 6th at 120 km/h), making the ride seem effortless. 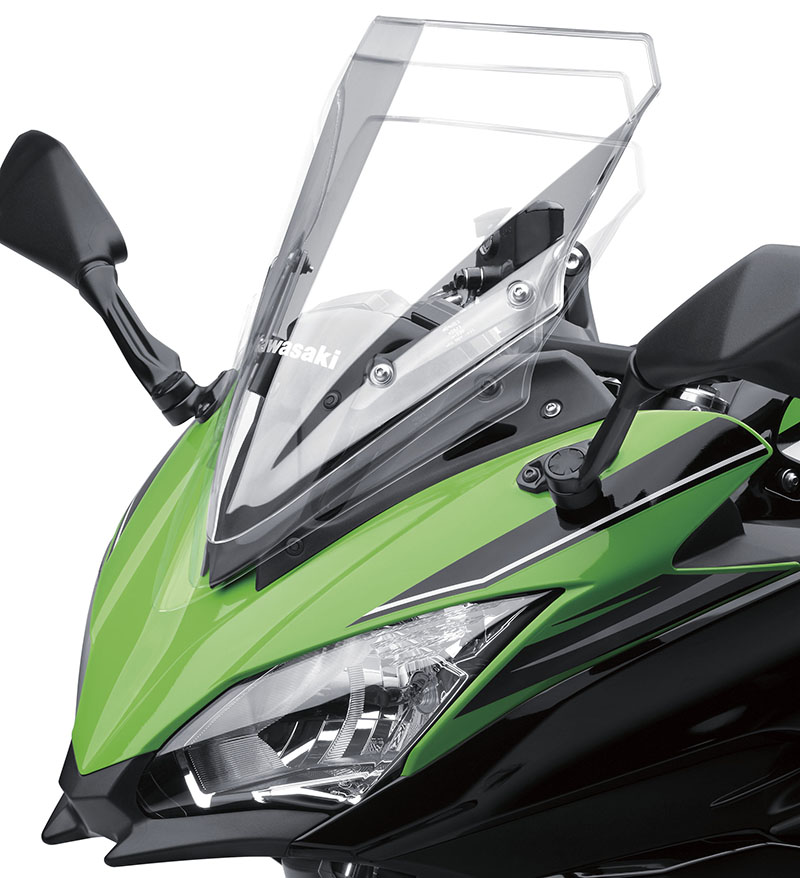 The new Ninja hit the spot being far more attractive and efficient. It comes close to being the perfect commuter and beginners bike. The Ninja look is a winner, and the only thing not on par with the package is the standard Dunlop D214 rubber. 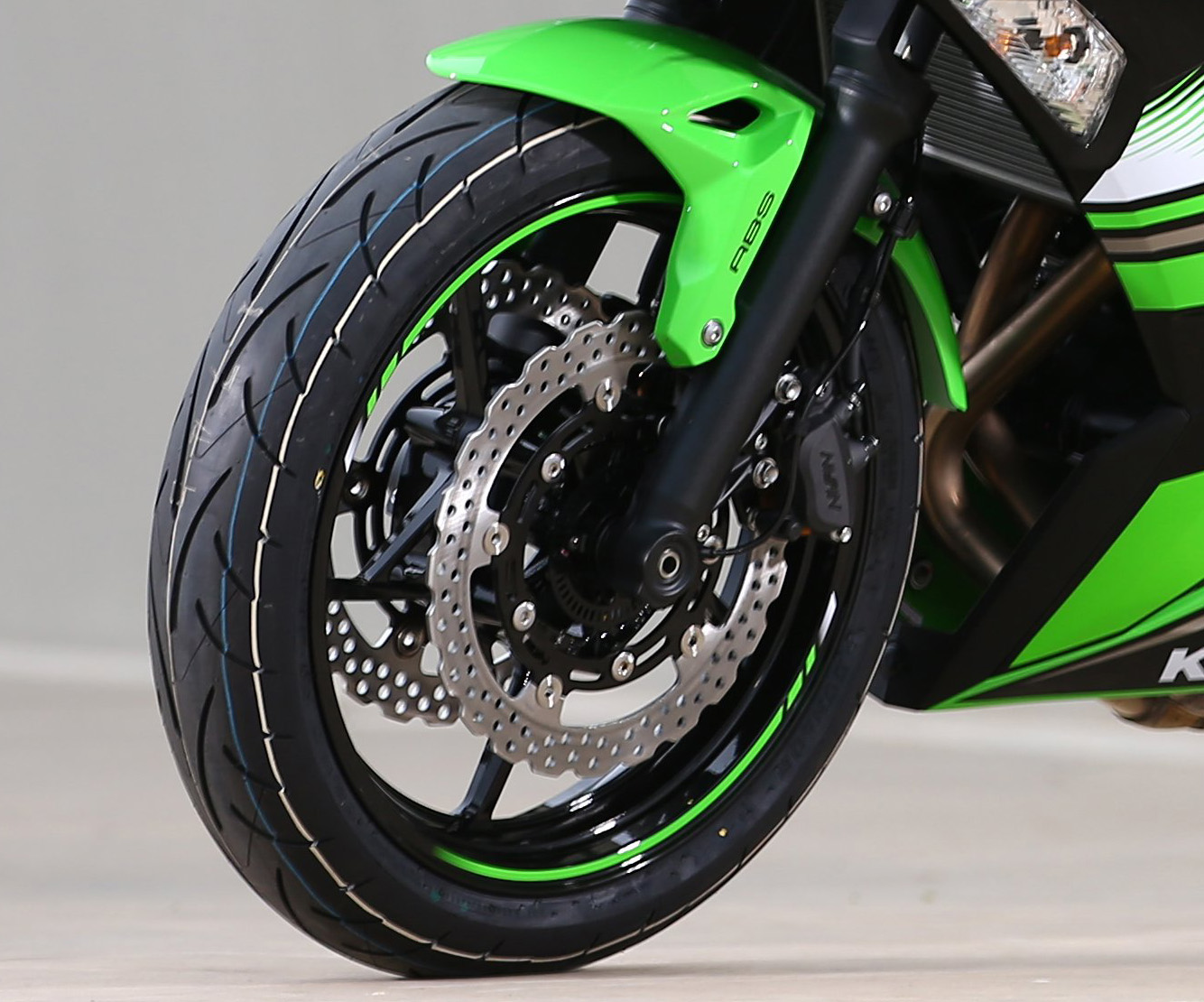 Grip is never more than average, the tyres need too much time to warm up (especially the front one), and they do not inspire much confidence. You’d be wise to change them if you plan the occasional track day.