Time really does fly when you are having fun. So much so that a full 37 years has passed since the first BMW GS bike, in the form of the R80 GS, burst onto the scene in 1980. Sporting modern motorcyclings first single sided swing-arm, suspended by a lay-down, single shock and conventional front forks, the GS was an instant success. Bored out to 1000 cc, the GS won the Paris-Dakar in 1981, 83, 84 and 85. Interestingly, the bike weighed in at only 183 kg. However, despite modern composite materials and metals, Adventure bikes have got rather porky, with the latest GS’s heavier by a full 60 kg’s – makes you think, doesn’t it!

The launch of the latest GS derivatives, the R1200 GS Rallye and R1200 GS Exclusive, started with a briefing on the new bikes by the new CEO of BMW Motorrad in SA, Edgar Kleinbergen. Edgar has a rich history in European motorcycling spreading over many years and is eminently qualified to lead BMW to even greater heights. Of the two new GS bikes, the Rallye is specced with a strong off-road emphasis, whereas the Exclusive is more biased towards road and touring. 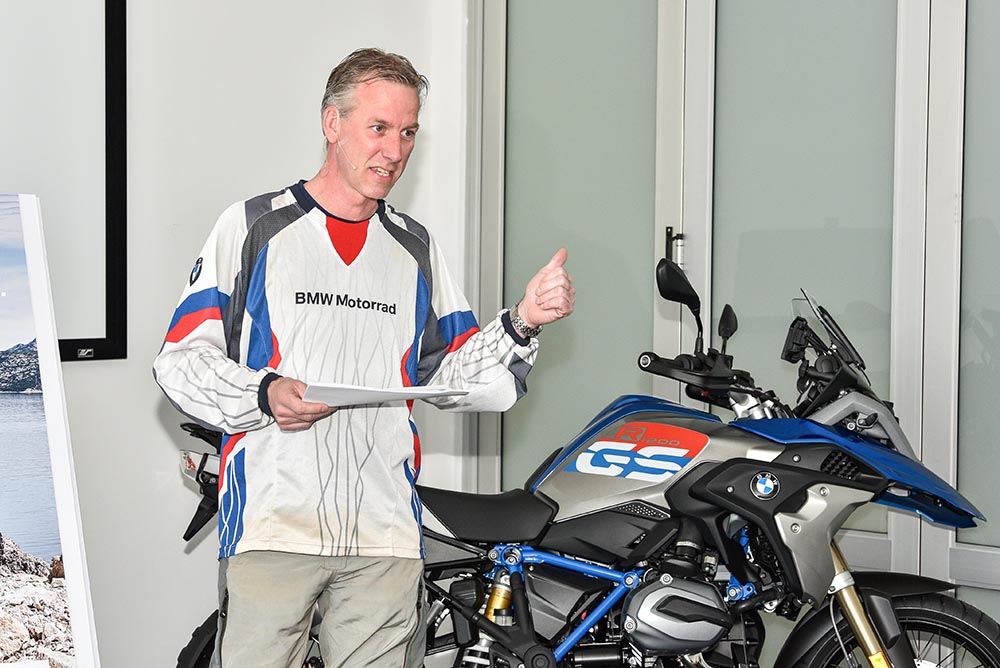 Both models are powered by the familiar, water-cooled boxer motor, pumping out 92 kW @ 7750 rpm and 125 Nm at 6500 rpm. The engine has evolved into one of the great engines in motorcycling. It is smooth in a kind of ‘cruise liner’ way, with no vibration, as such, but rather a soothing thrum, that resonates almost imperceptibly through the bike. From the moment the wet clutch is released (a vast improvement over the old dry version on older GS’s), there is smooth power and torque available, everywhere. 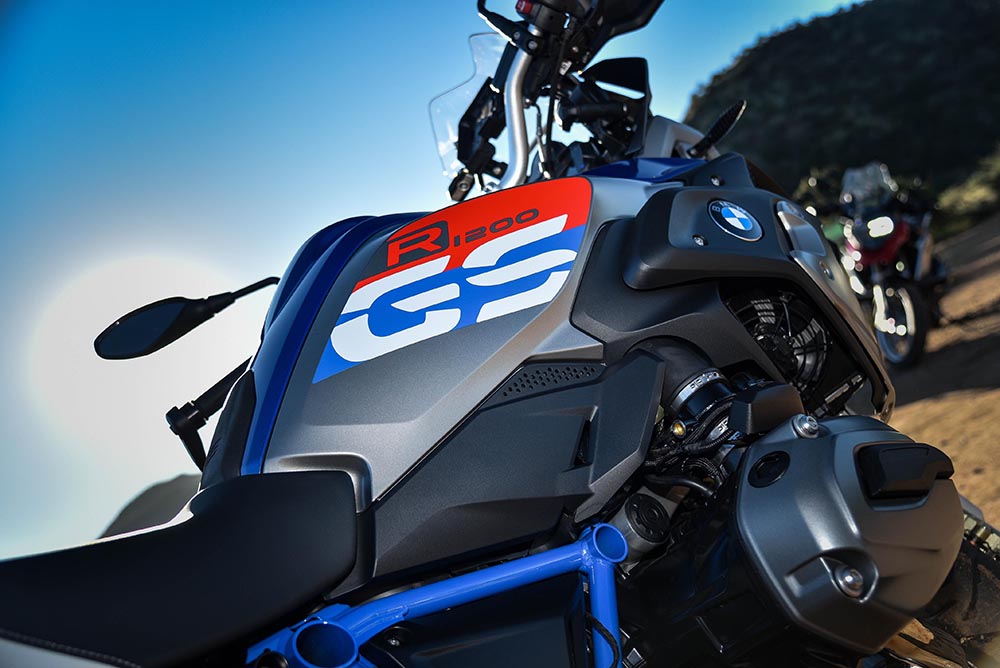 BMW quote a top speed in excess of 200 kph and by my own experience, it easily exceeds that mark by at least 10%! As can be expected, road manners are impeccable. The launch bike tyres were pumped really hard – the screen indicated 2.4 bar and 2.6 bar, back and front, respectively. On really bumpy tar at high speeds, as well as on rutted off-road, I experienced just a smidgen of head-shake. However, the standard fitment steering damper kept things nicely under control. I am certain that dropping the front tyre pressure to around 2.2 bar would eradicate any hint of head-shake and I am equally sure, that such a pressure would be sufficient to protect the rim from ‘lurkers’. 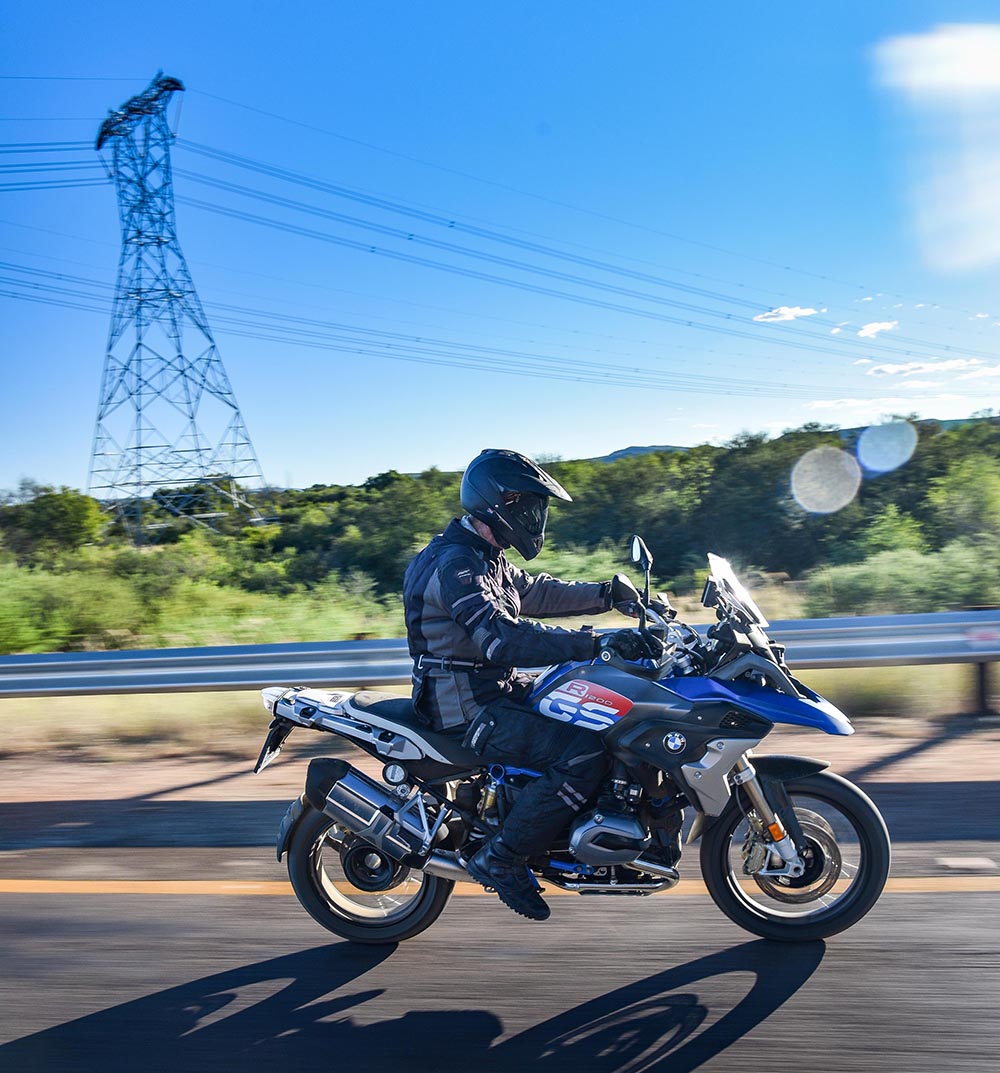 The Rallye and the Exclusive have similar electronic packages. Rain, Road and Enduro modes as standard, as well as Dynamic Pro and Enduro Pro, which are available by means of a coded plug. The various modes employ Automatic Stability Control (ASC) for optimum traction and engine response, to best negotiate the road conditions you are experiencing. Engaging each mode is as easy as pressing the mode button on the right handlebar until the mode you require is displayed on the dash – then pull in the clutch. Easy-Peasy! 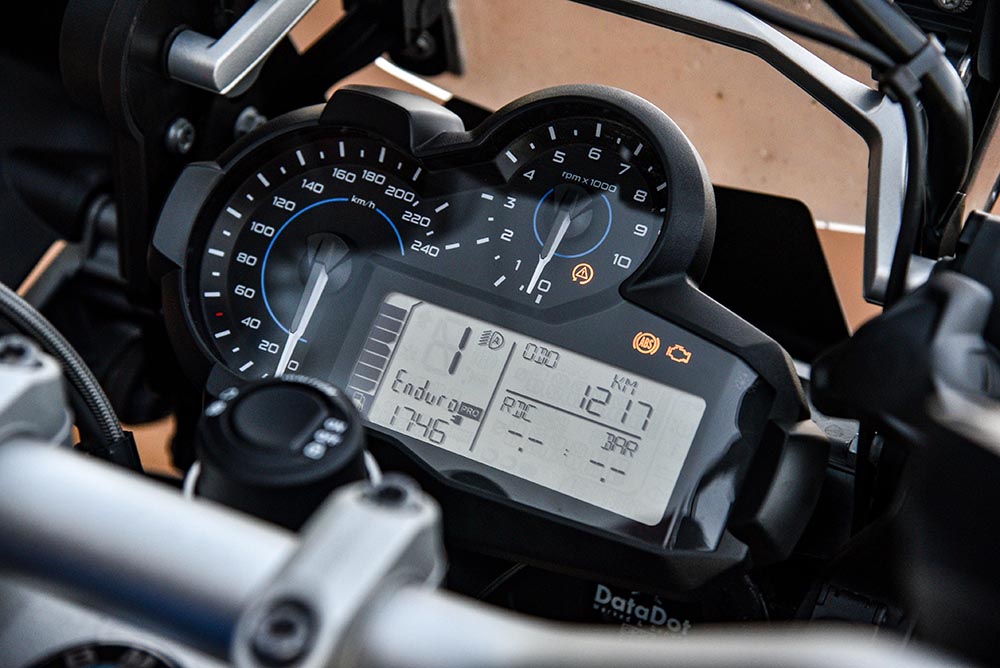 Complimenting the engine and braking controls, appropriate to the conditions, is ‘Electronic Suspension Adjustment (ESA). The left hand switchgear has a button with a ‘shock’ icon. Pressing this button enters the shock adjustment menu. ‘Auto’ has a self-leveling function, which, unlike previous generation ESA, now compensates for load automatically. ‘Min’ will reduce ride height to a minimum, whilst ‘Max’ will dial in maximum preload and ride height. 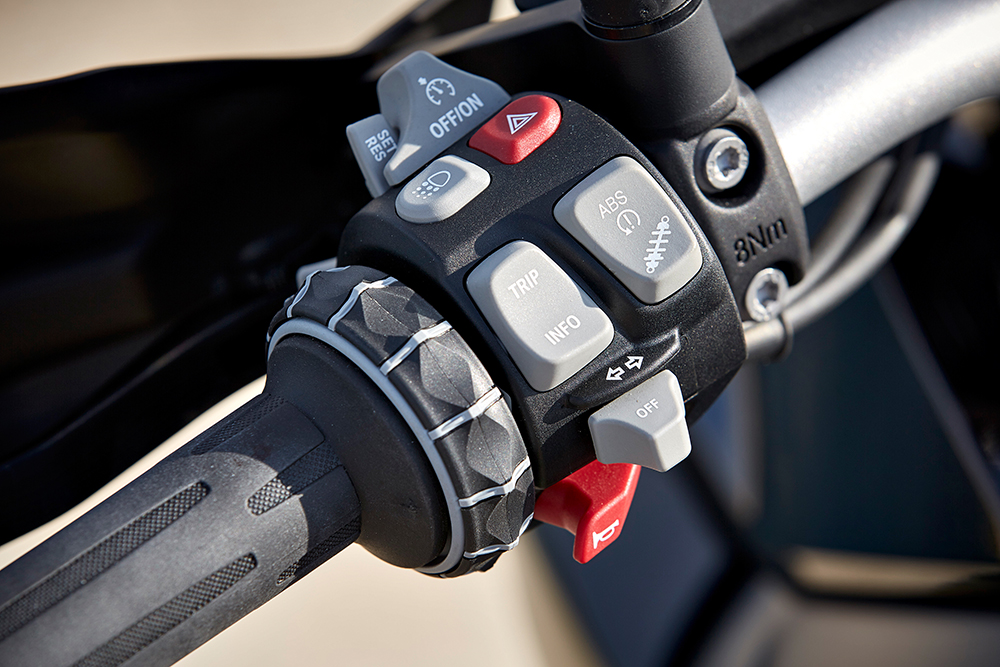 The suspension has 190 mm of travel at each end and fitting the ‘Sports’ suspension option (Rallye version only), will increase travel to 210 mm. This reputedly firmer option, incurs an extra cost over the base price of R241990, by a further R4900. None of the launch bikes were fitted with this option. I did find the ESA a little under-damped on the ‘Max’ setting, making the bike a bit bouncy over large bumps. Perhaps this is addressed by the ‘Sports’ option. It is perhaps stating the obvious that the new GS sports the familiar Telelever anti-dive front suspension. [One wonders if BMW will ever revert to a conventional front fork as on the original 800 and 1000 GS’s – ah!, a little nostalgia popping out here!] 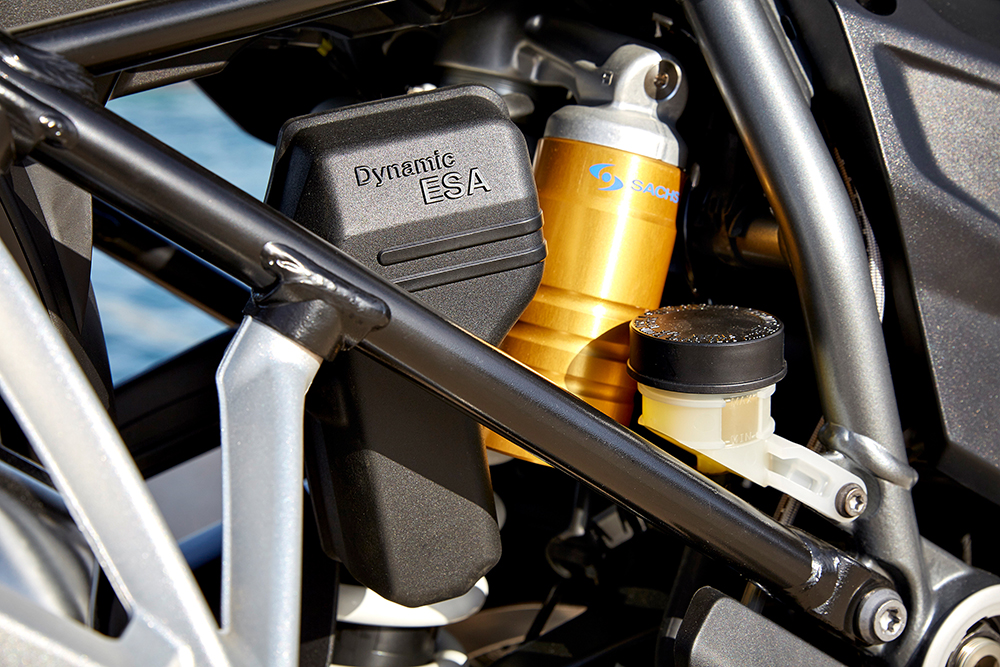 The Rallye is equipped with a harder, slimmer piece Enduro seat; wider Enduro pegs; a smaller ‘Sports’ windshield and frame guards. The Enduro bike is painted in a stunning BMW motorsport blue, white and red colour scheme, with a beautiful blue metallic frame. This enhances the satin black engine and drivetrain. Believe me, the Rallye is a looker! 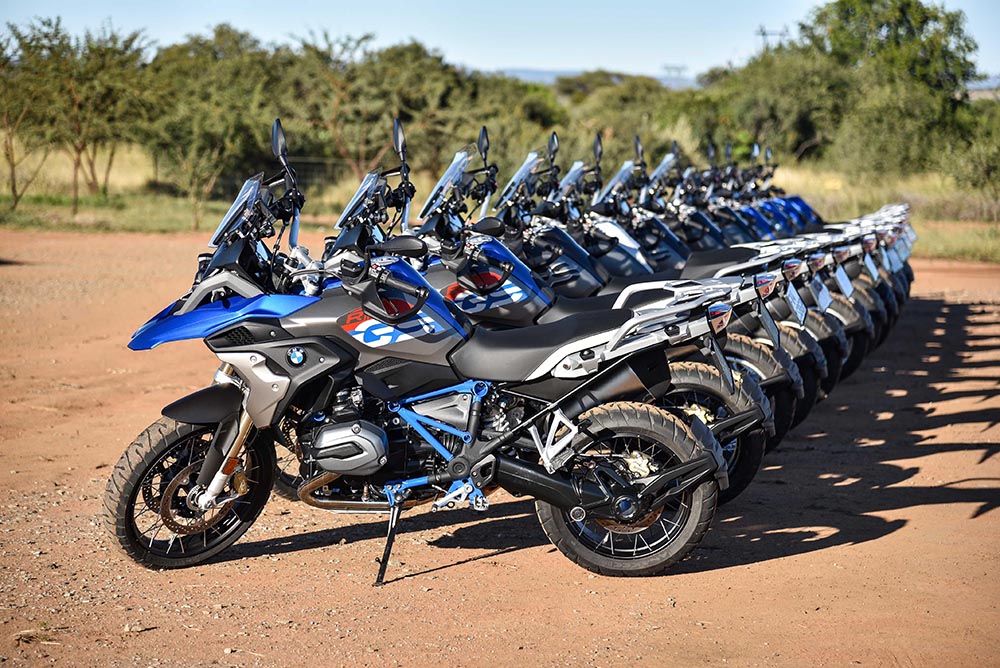 The Exclusive is painted ‘Iced chocolate metallic’, which, whilst classy, does not in my opinion, have the visual impact of the Rallye. The frame is grey metallic matt. However, this bike has a significantly more comfortable two-piece seat and a larger, more effective, windshield. The Exclusive would be my ‘no brainer’ choice for 1000+ kay days. Hill start control, a customizable Dynamic Pro and Enduro Pro, are all available with the fitment of a ‘plug’ sourced from your BMW dealership.

Riding the bikes on a variety of tar and gravel roads reminds you why the GS is the iconic Adventure motorcycle. Over a period of 37 years, the bike has been constantly refined and improved to what, in its current form, is a formidable package. Whilst not necessarily class leading in any one facet, it is an excellent all rounder. It is easy to see why, backed by an industry standard dealer network, it remains consistently at the top of the sales charts. 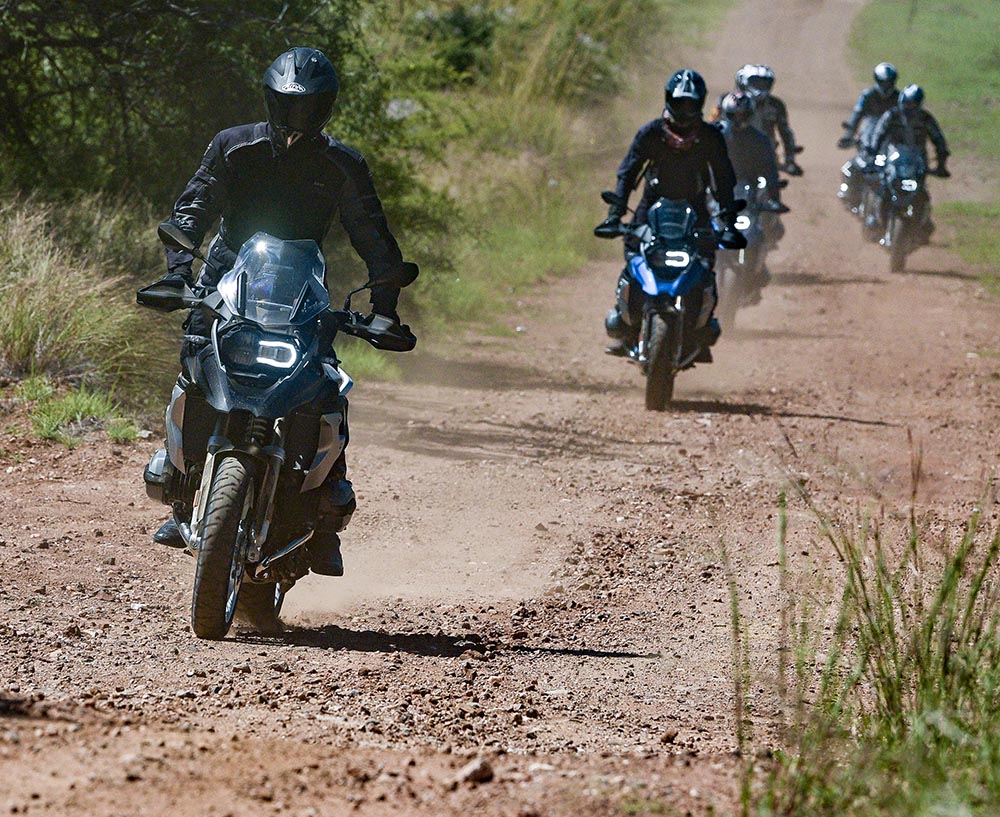 Our sincere thanks to Edgar,Thando and the rest of the BMW Motorrad team, for the privilege of participating in the launch of these two fine motorcycles.