I’m making my way through parc fermé, with a Dodge Hellcat to my left and a Lamborghini Aventador to my right. In front of me, two Russians are handing a breathalyzer back and forth, trying to figure out who’s more eligible to drive. 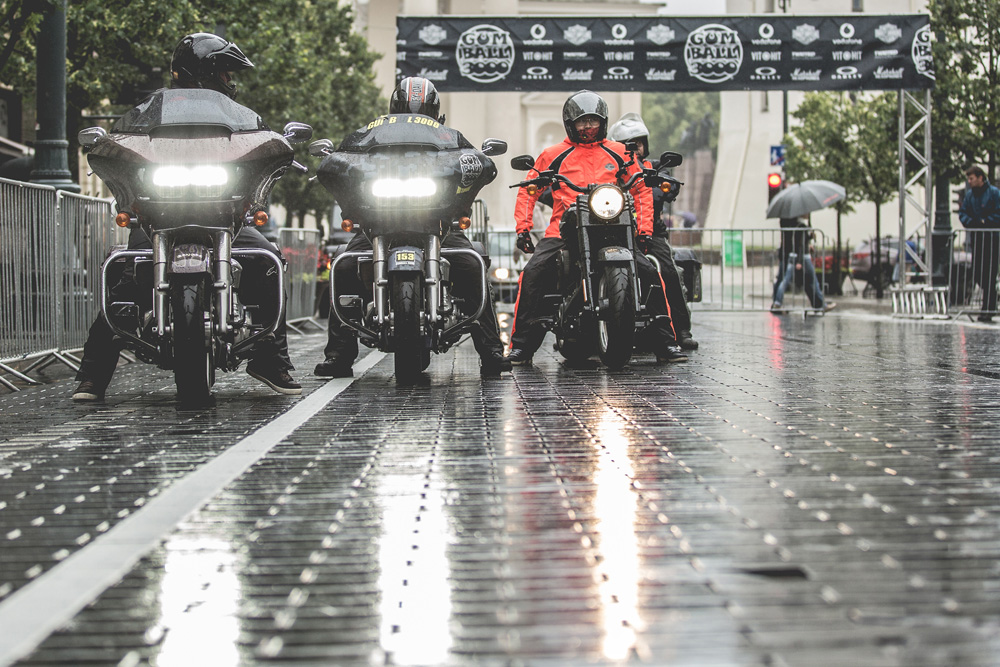 For the uninitiated, the Gumball 3000 is a non-competitive (yeah, right) rally, aimed at wealthy folk in supercars. It has everything you can imagine: cars you’ll never own, stars you’ll never meet, people with more money than sense and massive parties. Everything, that is, except motorcycles.

Our friends at Harley-Davidson International (Harley’s primary non-US operation) wanted to find out why. So they got on board as a Gumball sponsor, entered a couple of bikes, and rang us up to find out if we wanted to tag along. 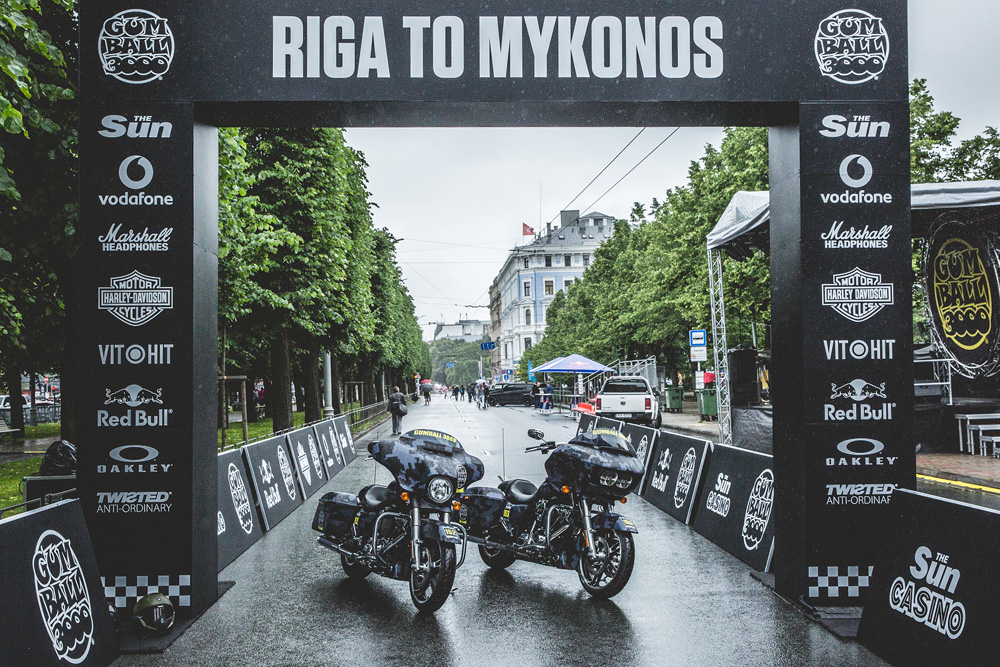 This year was the 19th year of the rally, and the course ran from Riga in Latvia to Mykonos in Greece—via Warsaw, Budapest, Dubrovnik, Tirana and Athens. The rally was book-ended by a pre-race day celebration in Riga, and a two-day party in Mykonos. 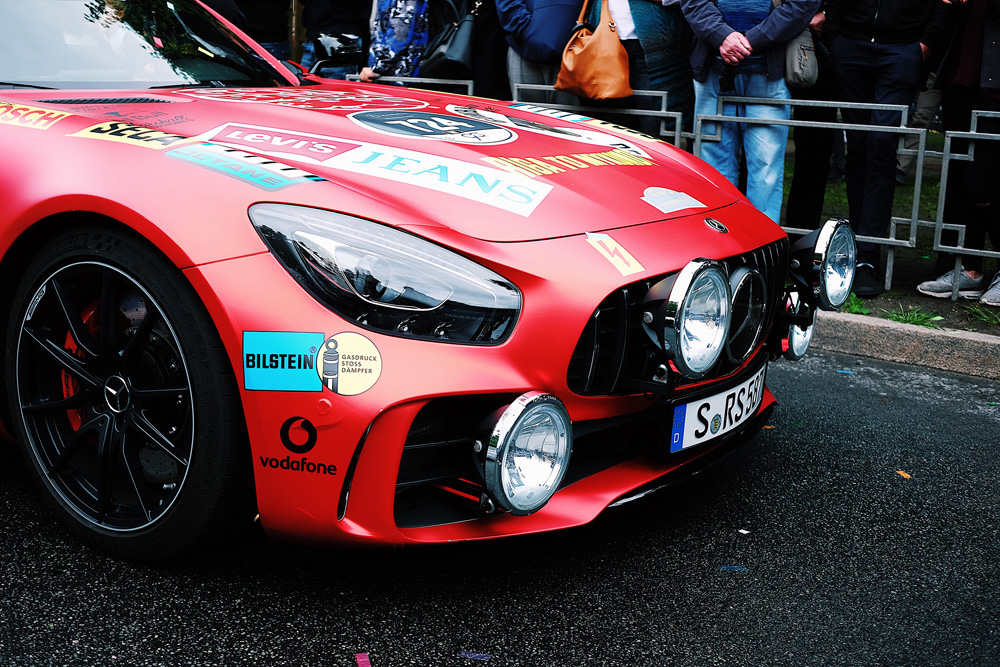 The Gumball is every bit as over the top as you think it is. There was enough exotic machinery on the grid to make any automotive fan boy weak at the knees, surrounded by the charm of Riga’s cobbled streets and old-world architecture. Very stern military men kept an eye over the vehicles, and an enthusiastic DJ made it impossible to imagine what Riga would sound like on a normal day.

With celebrities like CeeLo Green, Major Lazer, Afrojack and Gumball founder Maximillion Cooper and his rapper wife Eve all in attendance, the Gumball parties are reportedly massive. I say ‘reportedly’ because I didn’t actually go to any of them. On average they start at 11pm…which is fine if you’re sharing driving duties in a car with a co-driver the next day, but not great if you need to ride large and unfamiliar motorcycles over great distances. 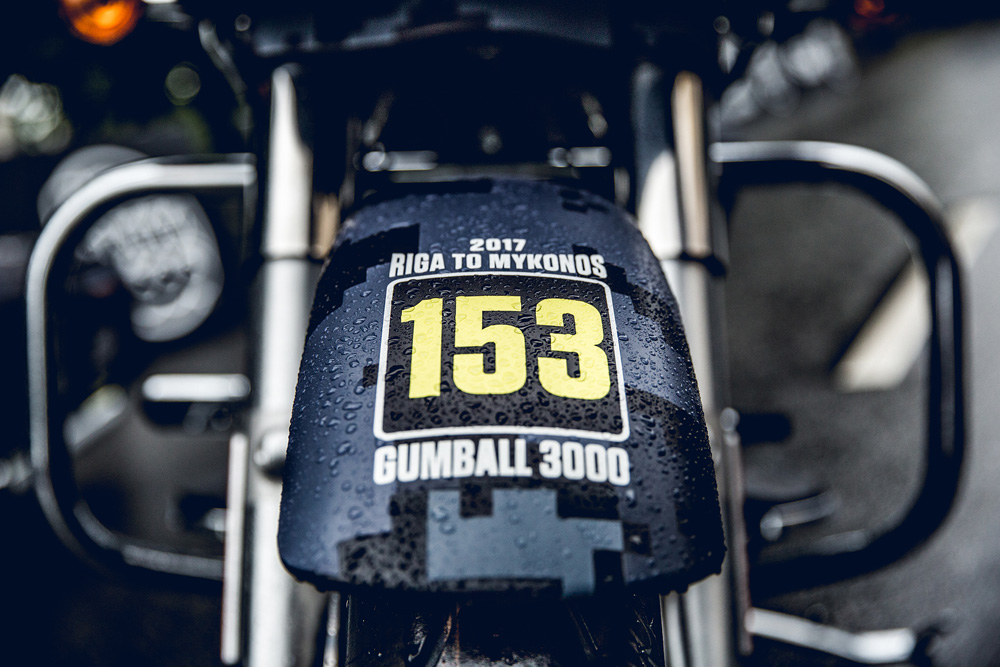 And I do mean great distances—the detailed Gumball route isn’t released until the last minute, and included close to 700km a day on average. So we attended the surprisingly tame ‘welcome drinks’ do, and turned in early.

All was revealed at the driver’s briefing the next day—in between participants shaking off hangovers, or still drunk from the night before. Max Cooper delivered your typical route and safety briefing—including the small detail that we’d need to cross Albania in convoy and under armed escort. 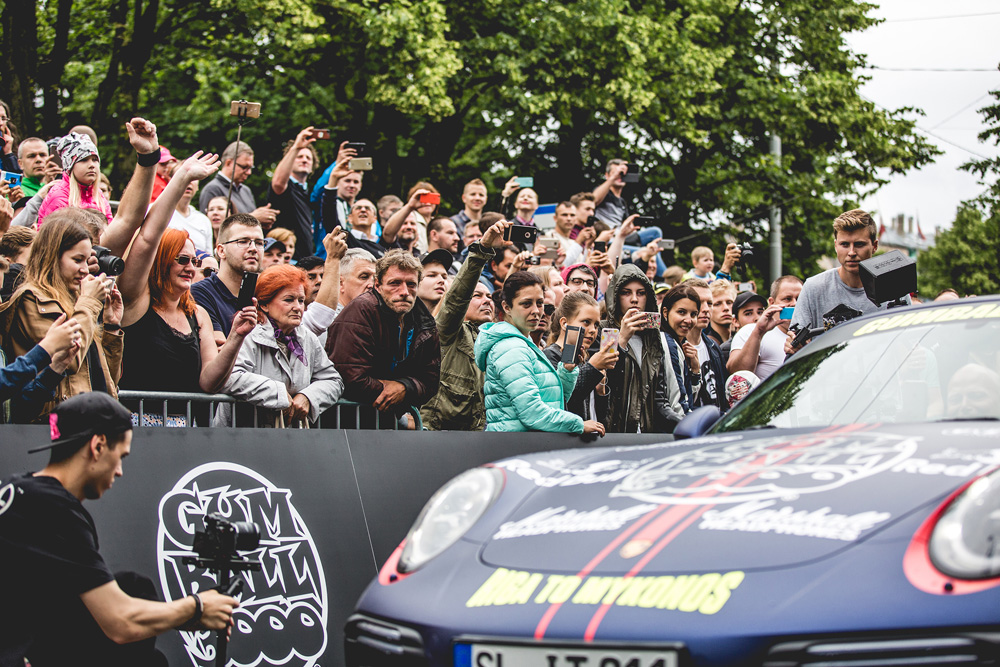 He also touched on the Gumball’s humanitarian side—this year, the rally raised £215,000 (US$280,000) for charities like the Nelson Mandela and Tony Hawk foundations.

A typical Gumball start is a massive spectacle. You get huge crowds, a European TV presenter in a pink suit covered in Batman logos, loud music and supercars revving their engines furiously—only to gingerly putter down the start lane one at a time, as the flag drops for each of them. It was noon before we rolled off the grid—rather late to start the 700km slog to Warsaw. 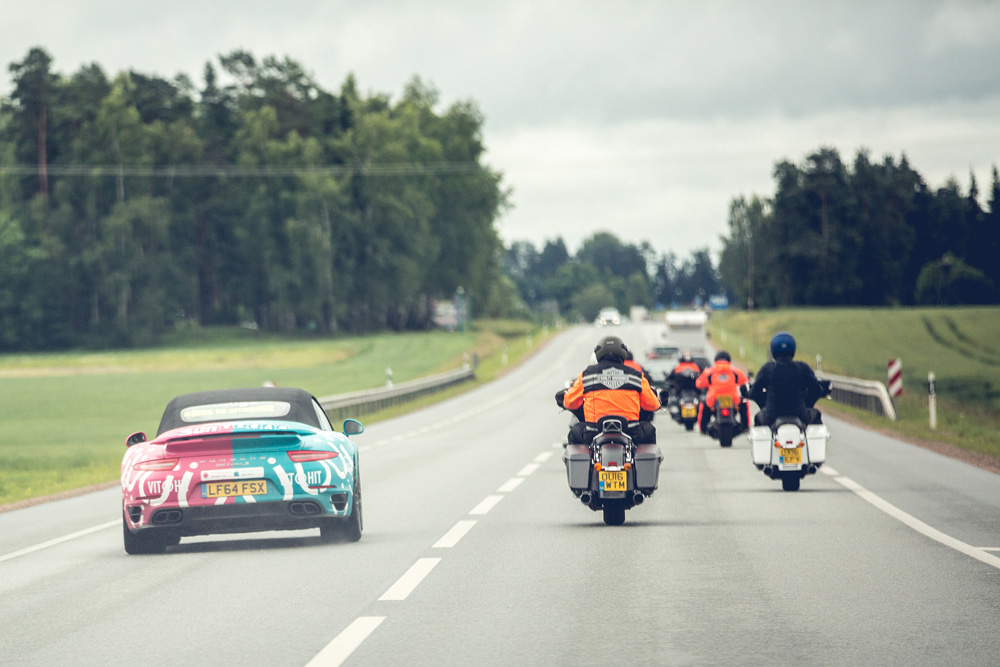 The best way to tackle the Gumball on a motorcycle is alone, with a screw loose and a slight death wish. But our group was seven-strong: Harley’s PR lead, Nik; ride leader Alex, myself and and four riders from the Asia Pacific region who’d won a competition. That meant the average pace was a little slower, fuel stops took longer, and filtering through massive amounts of traffic was tricky.

The riding itself was a pretty mental too. Within minutes of leaving the city center, the heavens opened and we pulled over to don rain suits. The crappy weather would persist all day—outdone only by the even crappier road conditions. Then there were the cars that would attempt to pass our group, only to have to duck into the middle of us halfway because of oncoming traffic (I almost became a trunk ornament for a Lexus on one occasion). 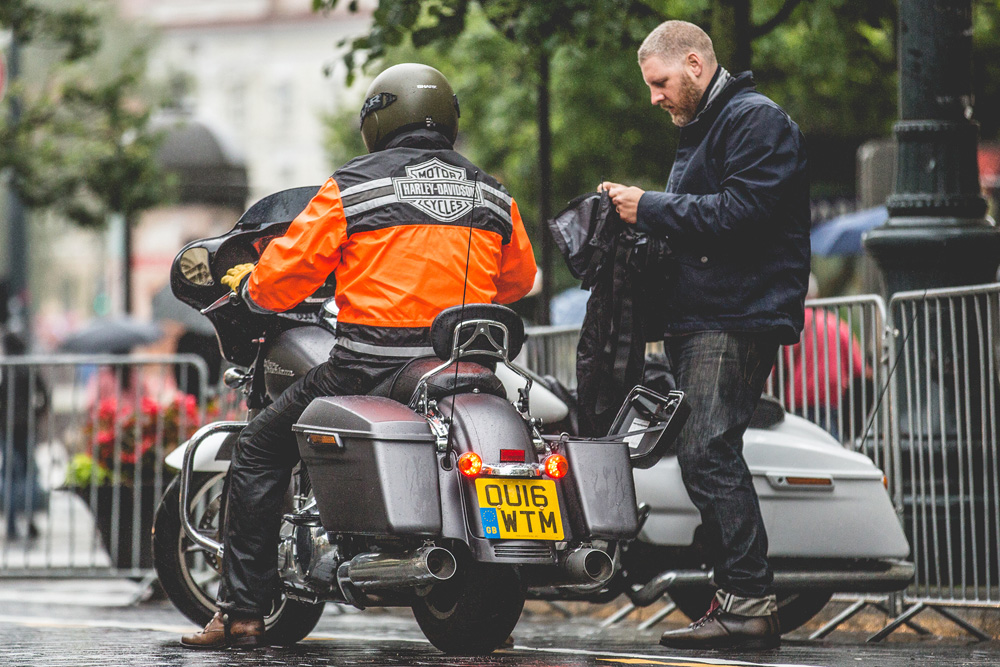 We pulled into the day’s lunch stop—the old medieval city of Vilnius—at about four. The ride had been such a blur, I hadn’t realized we’d crossed over from Latvia to Lithuania. And we were only halfway.

A few hours later, we rolled into the small Polish town of Augustów, still almost 300 kilometers from where we were supposed to be. It was already half past eight, and we’d heard reports of police patrolling the Belarus border further along the route, holding up entrants for silly reasons. Knackered, we booked into a cozy hotel on a lake and called it a day. 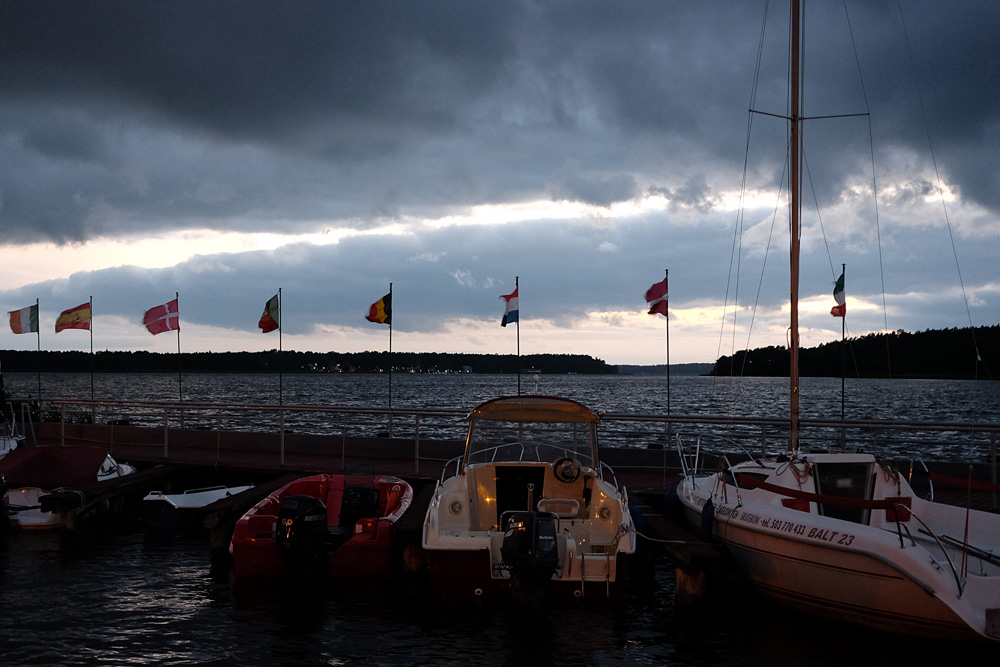 Catching up with the cars the next day would mean tackling 1,200 km (745 miles) in one day. So the Harley crew made the best call ever; we officially retired from the madness of the Gumball 3000, and would spend the next few days road-tripping across Europe, with Harley’s motorcycles and credit card.

While I tucked into a steak and a bourbon, the Harley crew—Nik, Alex, logistics and transport whizz Josh, and Charlie (I’m not sure what her official job description is, except that she does ‘everything’) mapped out a route. The bikes would go to Wroclaw and Prague, where I was due to leave, and then on to Salzburg and Munich, before everyone flew to Mykonos for the Gumball finale. 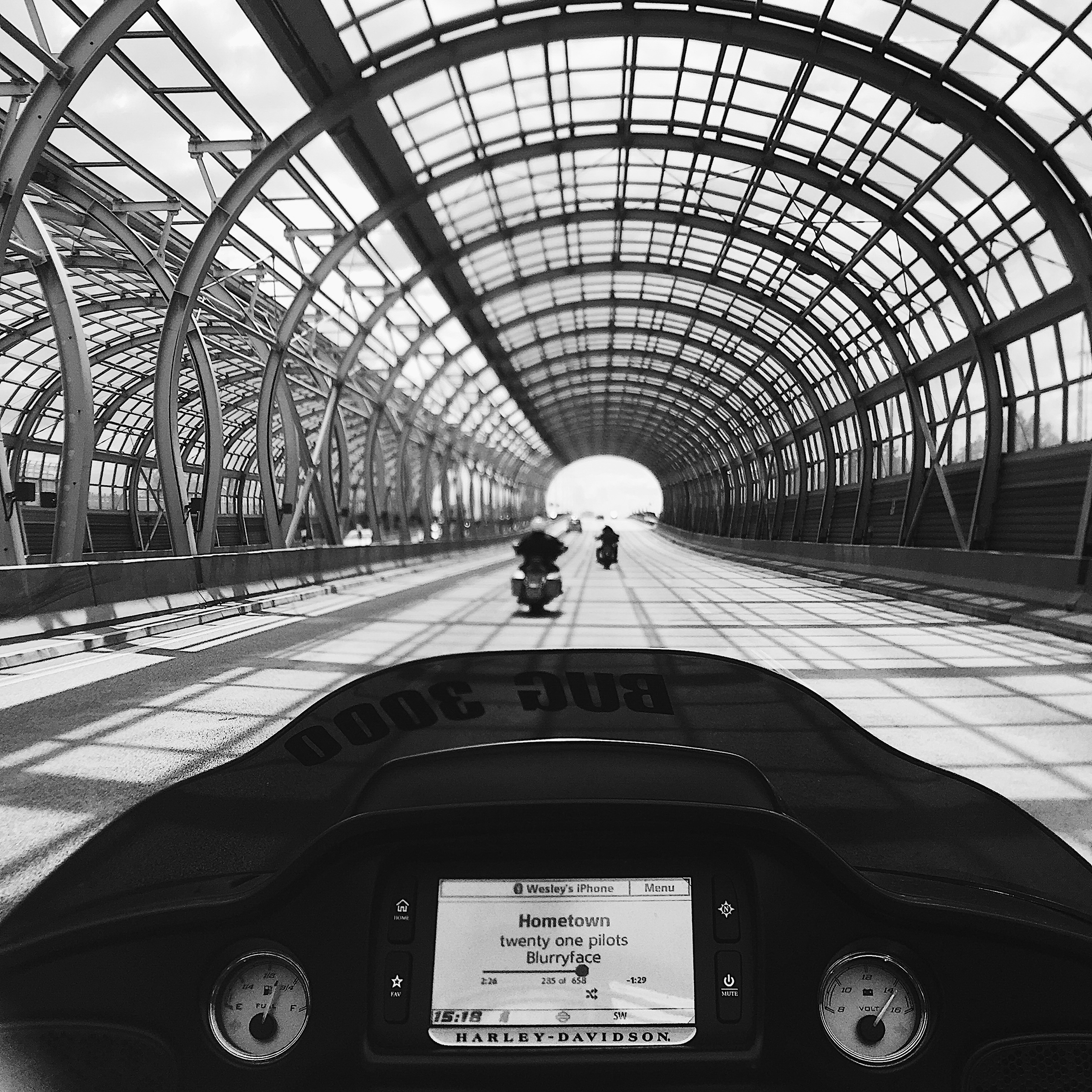 The pressure was off and the pace of riding became more manageable. The two days it took us to get to Prague were spectacular.

We rode through dense Polish forests, gunned it on Polish highways, and found Poland’s dodgiest outhouse. Our first leg was still a bit of a reach, mileage-wise, but a decent start time meant significantly less stress.

Warsaw was a blur—we landed just long enough for lunch—but Wroclaw was a pleasant surprise. I had a bit of time to wander around, and take in the beauty of the old world.

The stint from Wroclaw to Prague was pretty short, and took us through some spectacular scenery on twisty—but rough—roads. We even found a motorcycle race start grid just outside one village, and marveled at how hairy it must be to race on the roads we were riding. 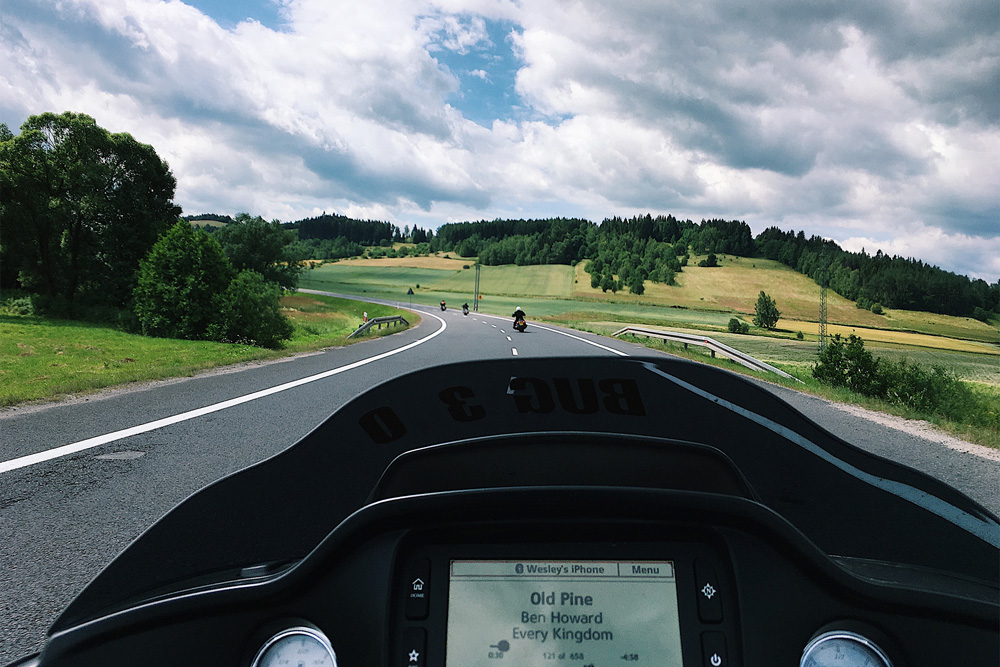 I spent my days switching between a Street Glide and Road Glide, both powered by Harley’s latest 107ci ‘Milwaukee-Eight’ big twin. I prefer the Road Glide with its fixed fairing, but both were pretty practical machines for the task at hand, with big, comfy seats, foot boards, storage space, cruise control, the ability to chug along all day, and a sound system hooked up to my iPhone via Bluetooth.

If I had to attempt the Gumball again, I’d probably pick the same bike—with a few choice mods of course. I couldn’t get a solid answer out of Nik if Harley would be back the next year to give it another shot. But he had a look in his eyes that said if he did, he’d know exactly how to tackle it. 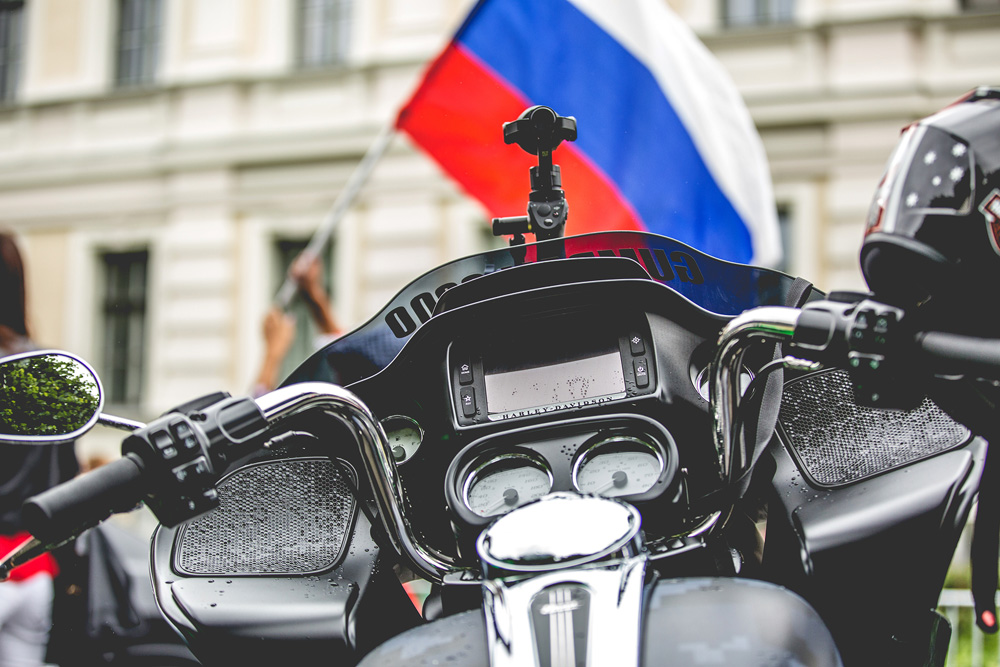 We made it to Prague just in time to see Guns N’ Roses exit our hotel, and I had just enough time for a brief walk around the square before I had to hop a plane out of there (while the rest of the team bagged tickets to the concert). With a couple more days of riding ahead for the guys—and a party waiting in Mykonos—I was pretty bummed to be leaving.

And the Gumball itself? Yes, it’s a little silly. But going cross country on a big ol’ bagger with a rad crew is something every motorcyclist should experience at least once. Or, as Nik put it when asked why Harley were there in the first place, “we just love riding motorcycles.” 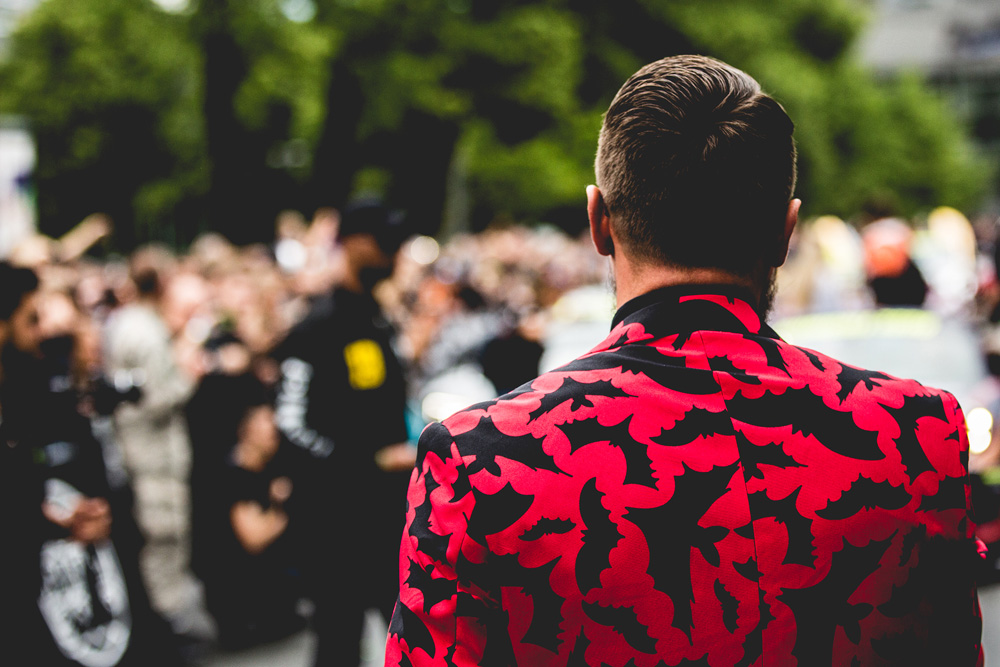 With thanks to Harley-Davidson International | Instagram Images by 8 Seconds and Wesley Reyneke.

This article first appeared on Bike EXIF. Reproduced with permission.