What is it about an adventure bike that is so appealing? And why do they sell in the volumes that they do? On my daily commute on my motorcycle, I see a number of adventure bikes cheating traffic in the morning and evening and in this world, they make sense as comfortable, manoeuvrable and relatively efficient. But there is the other adventure bike world, the world of Dakar, of cross-country touring, of travelling around the world north to south and east to west and a great deal of adventure bike owners have the dream, dreaming on their daily commute of taking on an adventure! “My bike could, if I wanted to”, “one day is one day”.

Now, some of us do take our adventure bikes off the tar and many of us have learned our riding craft on this type of bike. In conversations with a colleague, we discussed the adventure bike industry and explored the pro’s and con’s for both experienced and inexperienced riders. Some of the topics were size and weight of the bikes; how easy is the bike to handle off-road; comfort and, of course, styling. This is where Honda’s new CRF250 Rally came up. Having used one for a few days here are some of my thoughts. 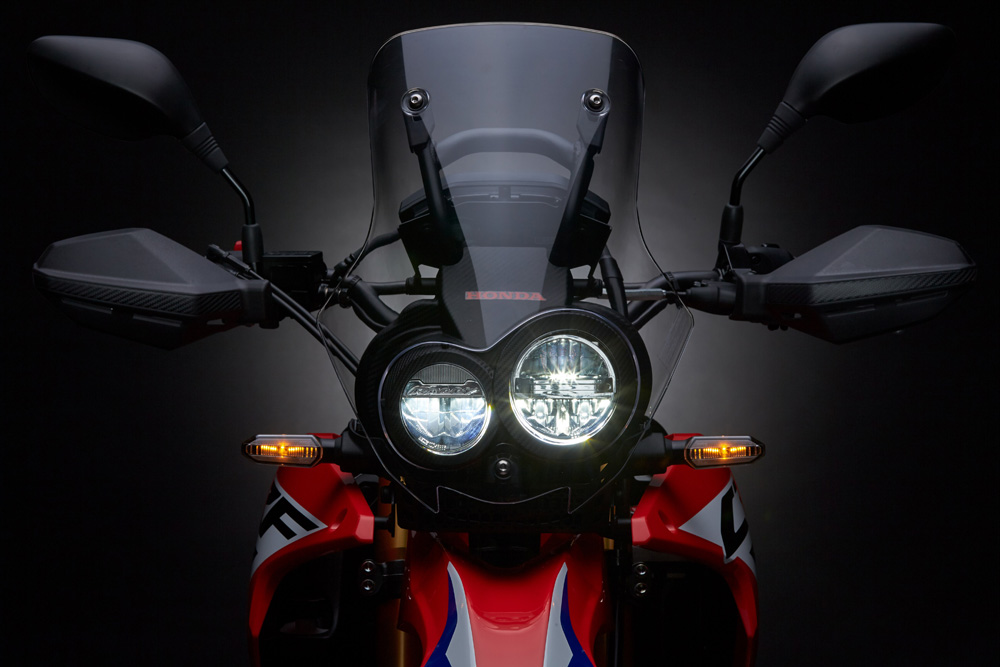 On my approach to the Rally my first impression was that the styling is superb! Honda have done an amazing job linking the design of this motorcycle to its Dakar bike and as you approach the bike you begin to imagine taking on all challenges, be it mountains or your daily commute.

The second impression was when I got on the bike. Here my over-arching thought, was one of a tall and narrow bike, with a feeling of ‘mechanicalness’, with an overlay of typical Honda build quality.

And throughout my time with the bike these impressions were just built on and made even stronger. Each time I saw the bike parked, ready and waiting to go ride, I was struck by the success of the styling and each time I rode I was more and more impressed. But let’s dig down into what this bike is about. 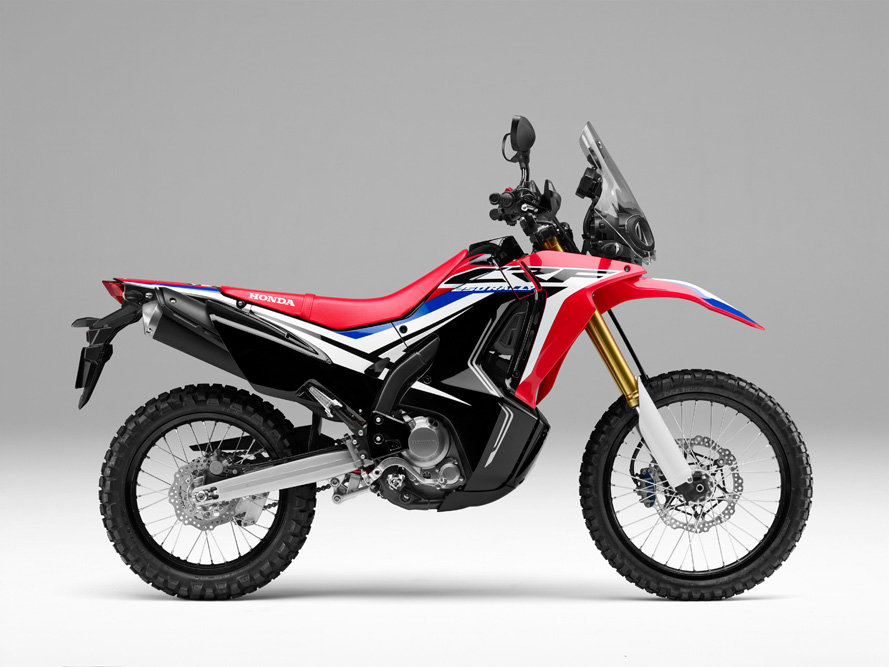 The Honda CRF 250 Rally takes the CRF250L and moves it up a notch, appealing to a slightly different customer. This bike has lost none of the substance but has gained greatly in the style stakes. You can clearly see the design inspiration from the HRC CRF450 RALLY Dakar racer, with the double headlight design with carbon fibre-look surround, Honda’s HRC colours beautifully draped over the body of this bike and a very “MX” or “Rally Raid” look from certain angles. Each time I stopped I had a few curious enthusiasts asking all manner of questions, from the bike to the environments in which the bike could survive.

I particularly liked some of the details, such as the “Rally” in the front headlight and the feel of the grips, which had a smooth surface where your palm rests and a textured surface where your fingers rest. The bike has a comfortable riding position, with a comfortable seat, great layout of everything from bars to pedals, typical Honda execution.

And what is the bike like to ride? Here the definition of “fit for purpose” is important, as this bike excels in some areas and is average in others. By this I mean if you plan to use this bike a great deal on freeways at high speeds, you might find the power insufficient and the vibration from the single cylinder engine tiresome over a long distance. For the occasional freeway stint, I found the CRF250 Rally able to hold highway speeds, with a necessary drop into 5th gear from 6th occasionally to keep the speed up and it didn’t feel like a chore. Learn to work the bike in this environment and she’ll work with you. 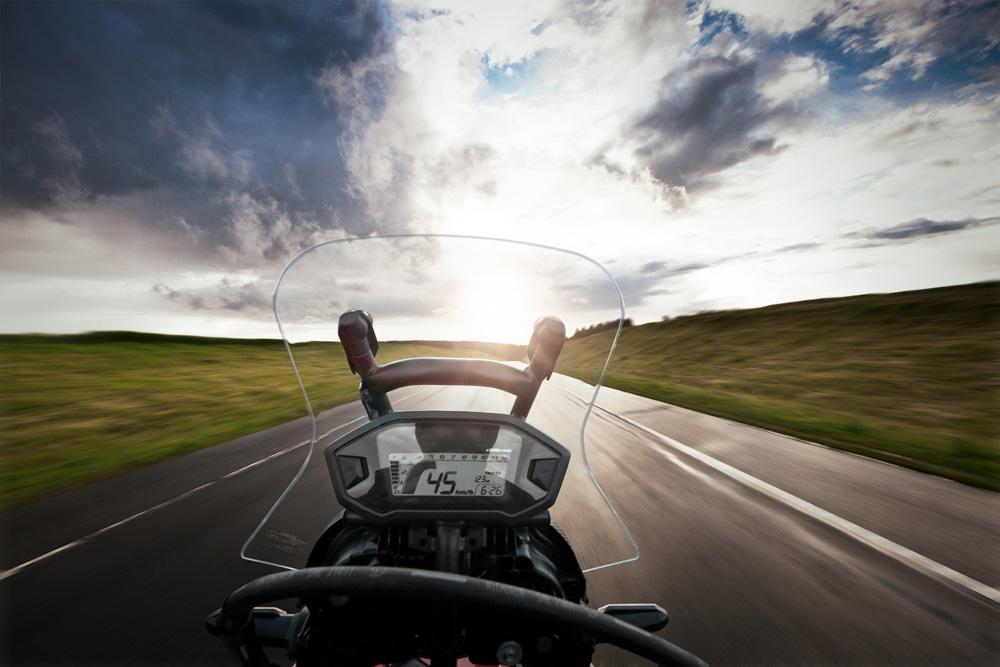 For the daily commute in traffic though, this bike was a revelation. Comfortable on the softly sprung suspension with enough power to keep ahead of the flow of traffic, the narrowness of the bike also gave confidence in the hustle and bustle of big city morning commutes. And   Honda, for those of us who commute in the evenings and into the night and where lighting is important, thank you for giving us a bike with great lights – this bike’s LED’s are magnificent.

But where the bike felt completely at home was when I felt like spending a day exploring the roads less travelled. I spent the day finding those gravel roads, those trails, seeking the ultimate photo spot to best highlight the bike and what I found was a motorcycle that gave me more as I asked for more. Cruising happily on gravel roads at 80 km/h, perfect in the tight and twisty stuff it gave me more confidence as the kilometres piled on. Some of the details here add up to an impressive package, such as the ground clearance being 15mm more than the CRF250L (at 270mm), and interesting front fork design with one side housing the spring and the other the damper, well-chosen gear ratios with first being short enough for the slow stuff and subsequent ratios being spaced out perfectly as the speeds increased, the details can go on for ages! 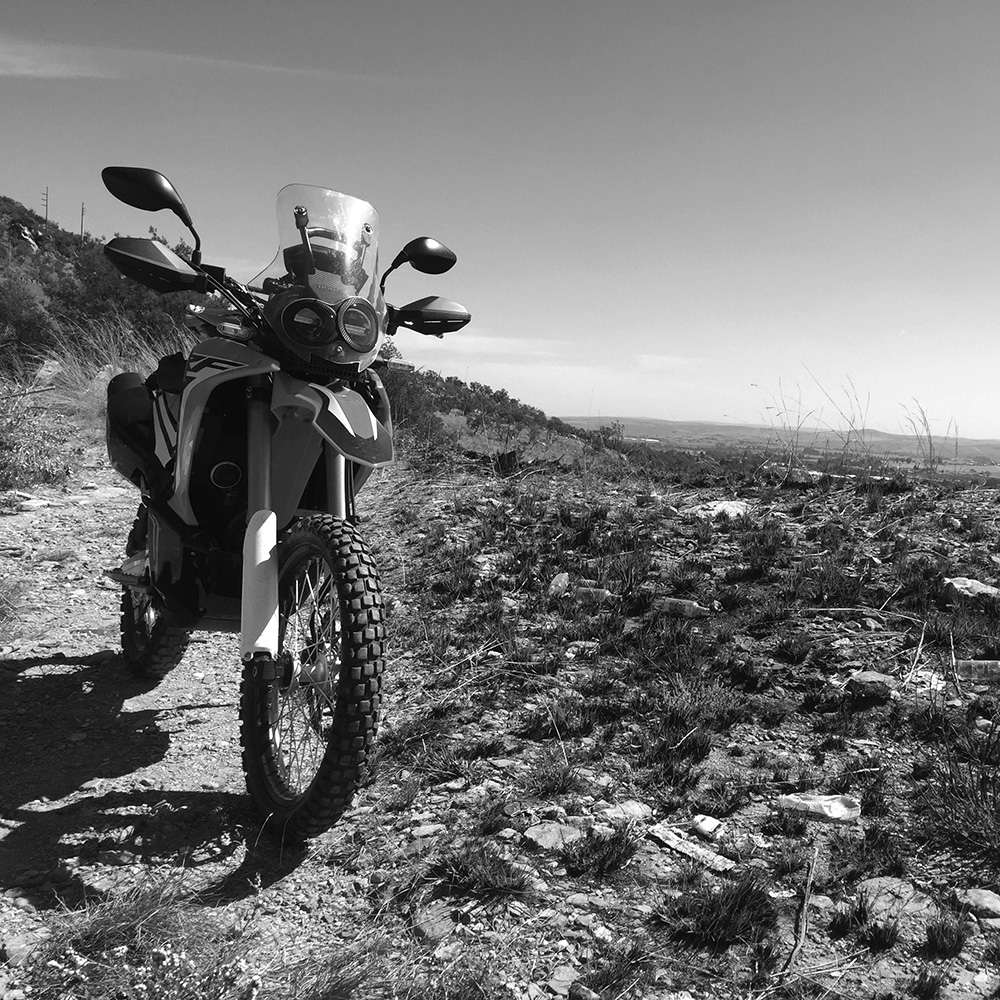 Together with the gear ratios, the engine can cruise all day at 100 km/h feeling unburstable at that speed, almost as if it could do that forever, eating up many many kilometres. It will pull from 3000 rpm, with a noticeable power spike and an extra buzz over 7000 rpm, and this is where you will need to keep the engine if power situations are the order of business. And with a relatively long throttle travel, you can easily modulate the power, depending on the situation. The bike also comes with ABS and there is the option to disable the ABS on the rear wheel, which is useful for those off-road conditions.

On to some of the sensible topics such as fuel consumption. With the larger 10,1 litre tank my range was around 290 kilometres, running at about 3,5 l/100kms (but obviously different riding styles will get different results).

My only real criticism of substance? Well, I really had to nitpick because once I was in the right mindset with this bike everything seemed to really make sense. The only thing I found annoying was when putting out the stand I would occasionally put my foot on the spring rather than the stand when pushing down, and I would worry that this might break over time. You see, nitpicking. And yes, it is a tall bike, even more so than the CRF250 L, so shorter riders be warned. 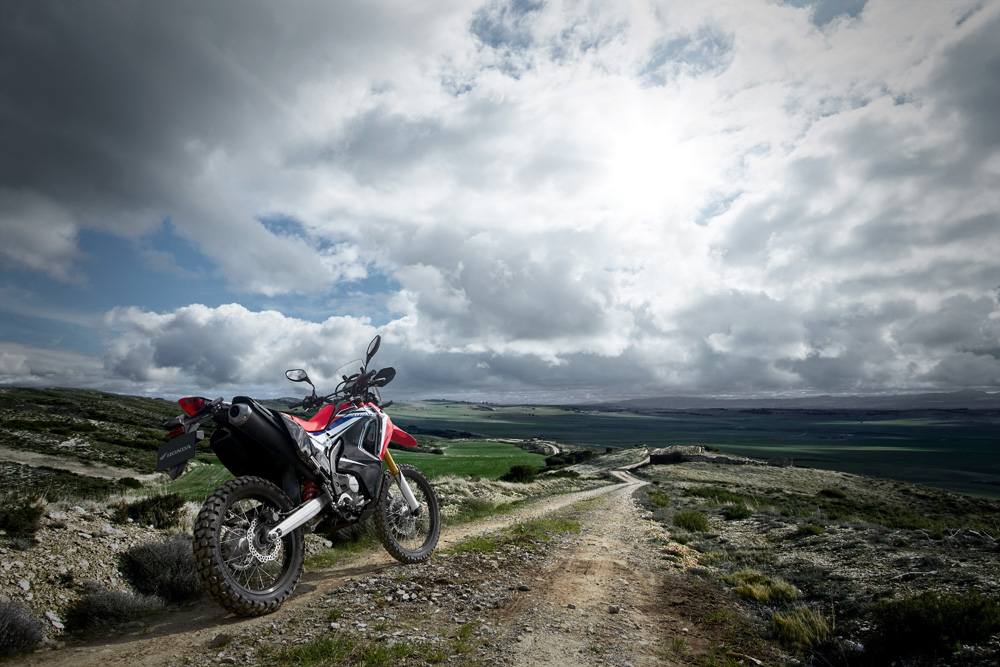 My summary of the CRF250 Rally is that it’s a bike that gives you more confidence with more kilometres and this makes it perfect for a rider to learn their adventure bike craft on. It is also a fantastic bike for the more experienced riders, looking to take a bike to places the larger and heavier adventure bikes might struggle. For your R84995, you are getting an adventure bike that exudes fun and adventure. It is certainly the perfect “fit for purpose” bike as it easily meets the Adventure Bike criteria.