Last year, Harley-Davidson made its own revolution for the MY17 range, with a brand new engine, the 8-valve Milwaukee Eight that was available in three different technical specs. First was the 107cubic inch (17454cc), with oil-cooled head engines, with no lower fairing, such as Freewheeler, Street Glide, Road Glide Special and Road King. Then came the twin-cooled 107ci for the bikes which could hide a pair of radiators in the lower fairing: Road Glide Ultra, Ultra Limited and Tri Glide Ultra, all had their heads liquid-cooled to reduce engine noise and heat emissions. Finally, the twin-cooled 114ci (1868cc) for the top of the range, the CVO Limited and CVO Street Glide and note that nowadays, there is no need to rob a bank to access the CVO pleasures.

The MY18 Softail range now utilizes the oil-cooled 107ci and, for four of them, 114ci engines – More power, for sure. All the new Softail models come with new LED headlights, key-less start, improved electrical charging system (more than doubled at idle speed), new instrumentation and a USB port near the steering head. 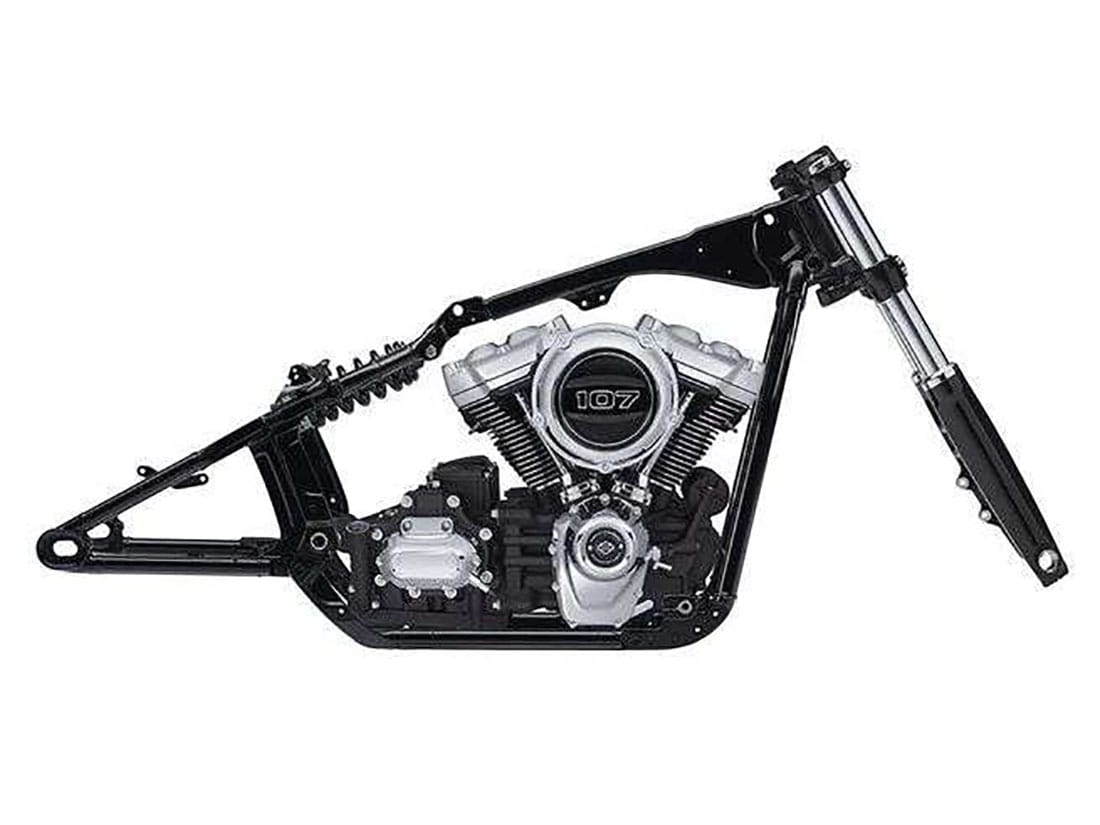 The new Softail frame has been redesigned to keep the Softail spirit but in a different way. From 1984 to 2017, the Harley-Davidson Softail has hidden its twin shocks under the frame, where they worked in extension. There is now one single shock, working in compression, and it is located between the main upper tube and the rear triangle. The engine is rigid mounted in the frame and contributes to the overall stiffness. The new frame has 50% less parts and 22% less welds than the previous one. More than that, the new Softail frame claims to be 34% more rigid compared to the previous one, which helps to improve steering precision and riding pleasure. Front fork is also new, made by Showa and with the same cartridge technology that appeared last year on the Touring range, names “Dual Bending Valve”.

The rear suspension can be adjusted for the preload: depending on the models, it requires a tool under the seat, or it has an external knob on the 114ci versions with the wide rear tyre (Breakout, Fat Bob). Considering the new frame as the main component, Harley-Davidson has three steering head angles, two front fork widths and two swing-arm widths as well, depending on whether the bike is fitted with a narrow or a fat tire.

After the technical presentations, time to ride! We had the chance to ride four bikes from the new Softail range in the mountain roads near Barcelona, Spain. 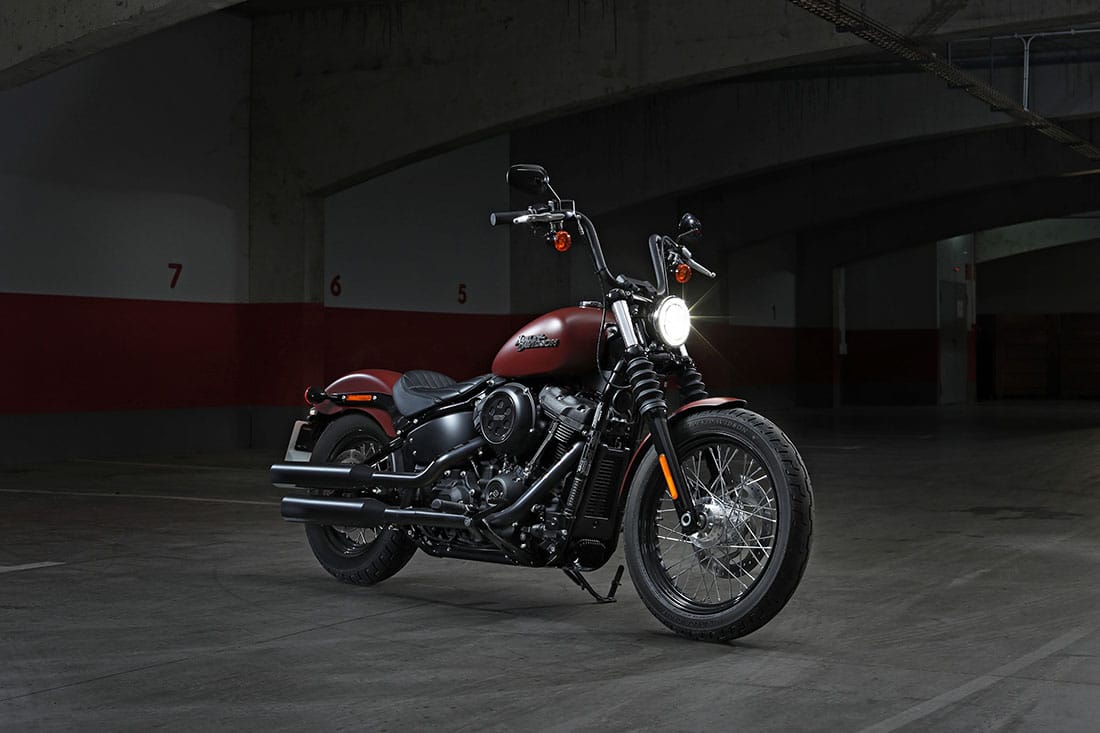 Bye-bye the Dyna family! The Street Bob appeared in 2006 and now the new Street Bob is part of the Softail range. Besides the new chassis definition, it keeps the fundamental elements. First is the look, very neat and neatly pared-down: small mud-guards, wired wheels, a single-seat, two wheels and a (big) engine – nothing fancy, the Street Bob is a real bobber. Engine, exhaust and wheels are now in a black finish, instead of the chrome from the previous Street Bob generation.

The Street Bob is also the cheapest way to access a “big” Harley, and a great go-between of the Sportster family and the Big Twin range. Hence, the design has been modernised: LED headlights, new and slimmer fuel tank (13.2 litres instead of 17.8 l). 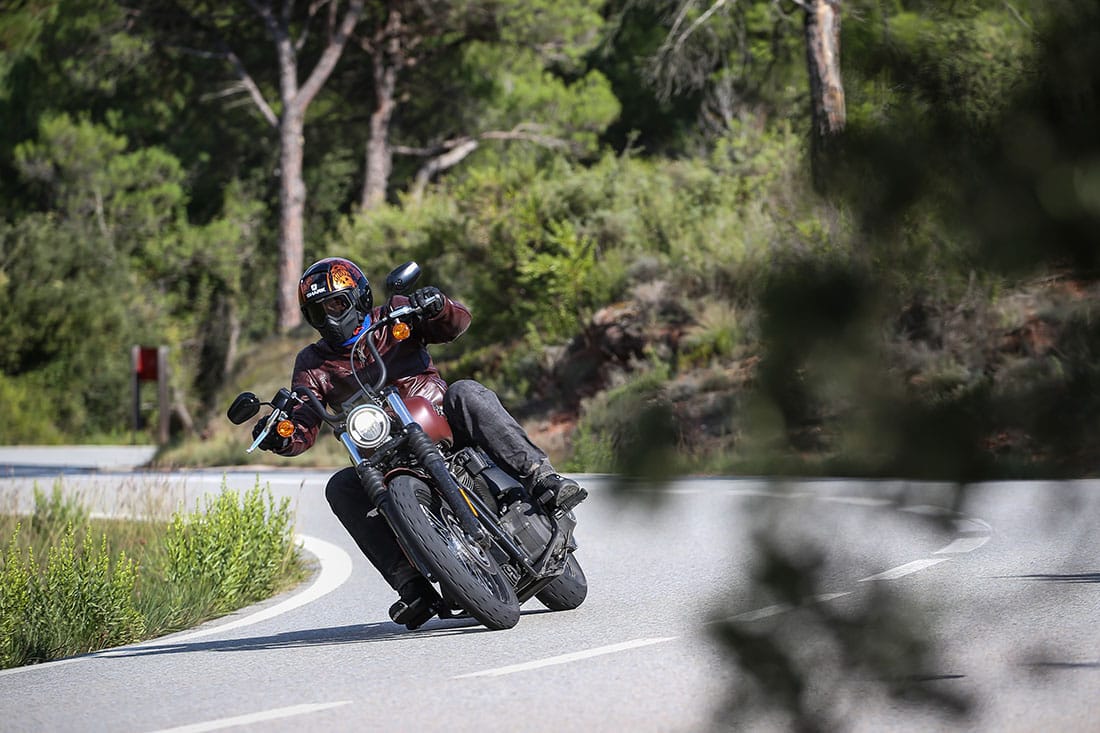 Once on board, it takes a little time to get accustomed to the riding position with the mini ape-hanger handlebar and the foot-pegs in a middle position. However, after a few kilometres, I felt very comfy on board and started to focus on the new instrument panel. I initially thought it a bit ‘cheap’ but eventually decided it was fine: it’s very easy to read, has all the required information (rev counter, fuel range, two trips, clock, gear indicator…) and is well integrated in the handlebar.

The second thing to come into my mind was that I had never felt a 286 kg bike feel so light! The Street Bob has lost 8 kg’s from the previous generation, but it just feels so much more than that. With a seat height as low as 680 mm, the centre of gravity is just near the ground and the bike feels so agile. On the road, the bikes ergonomics makes sense: the combination of the narrow tires and the lever arm given by the mini ape-hanger, provides so much pleasure going from one corner to the next. 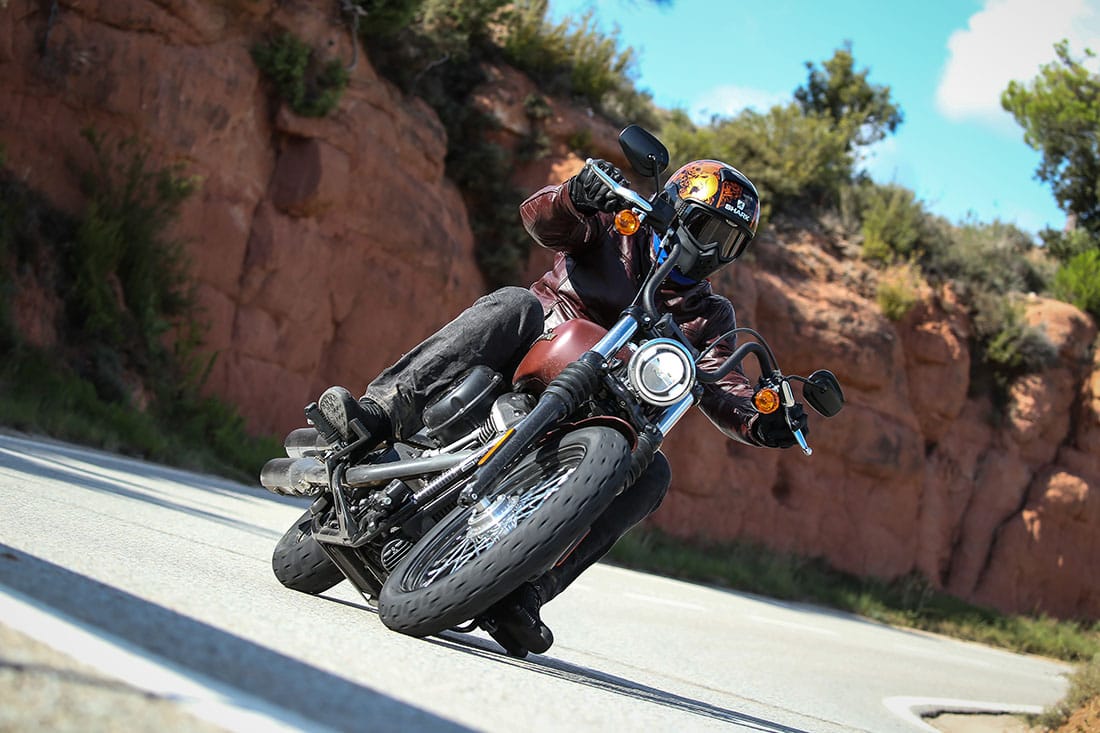 We’ve seen that the new chassis is 34% more rigid: however, that’s comparing the two Softail generations. You have to remember that the Street Bob has previously been a Dyna, so, the gain is now 75 % over the old Dyna chassis. And that changes everything. 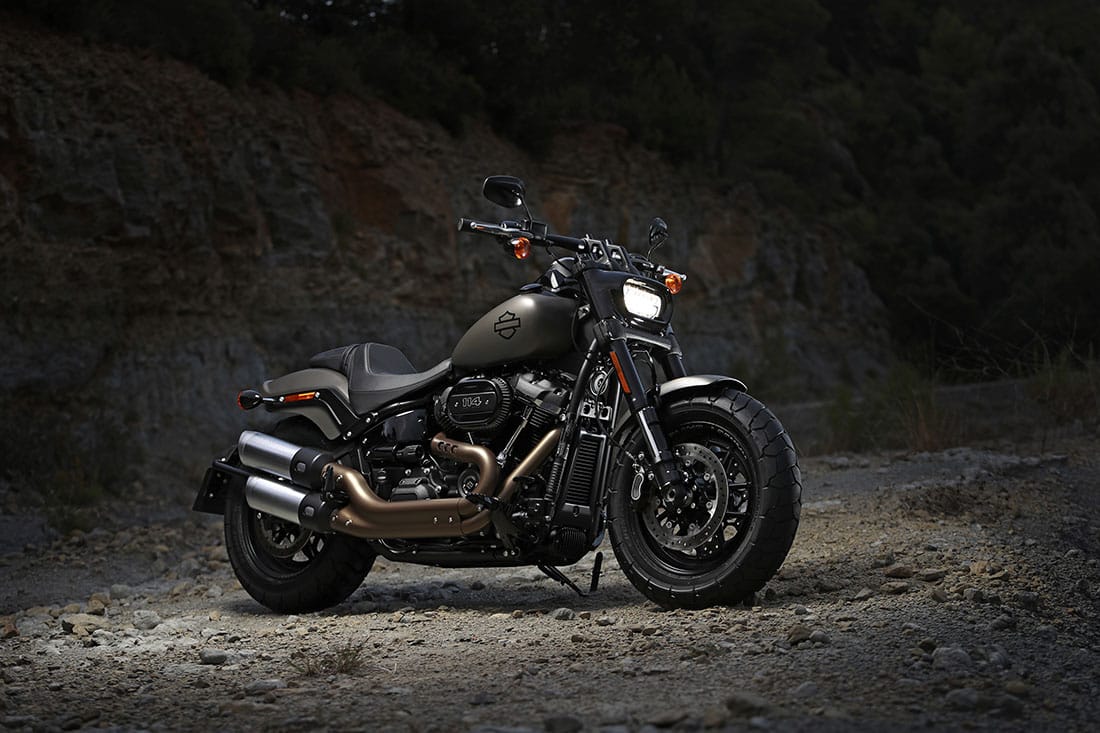 Like the Street Bob, the Fat Bob is also not a member of the Dyna family and has also joined the Softail range. The Fat Bob has always made a departure from the archetypal Harley-Davidson range: with its dual headlight and fat, nearly knobby tyres, it always stands apart.

For 2018, the Fat Bob’s DNA has just been stretched by the Harley design team. Massive and aggressive, the Fat Bob is just a mean machine. “This is the bike on which to escape a zombie apocalypse”, said H-D chief stylist Brad Richards. With its fat tires, the bronze exhaust cover and the thin headlight that looks like a death-ray coming from a Battleship Galactica cruiser, the Fat Bob is very intimidating. Yamaha V-Max and Ducati Diavel, watch your back! 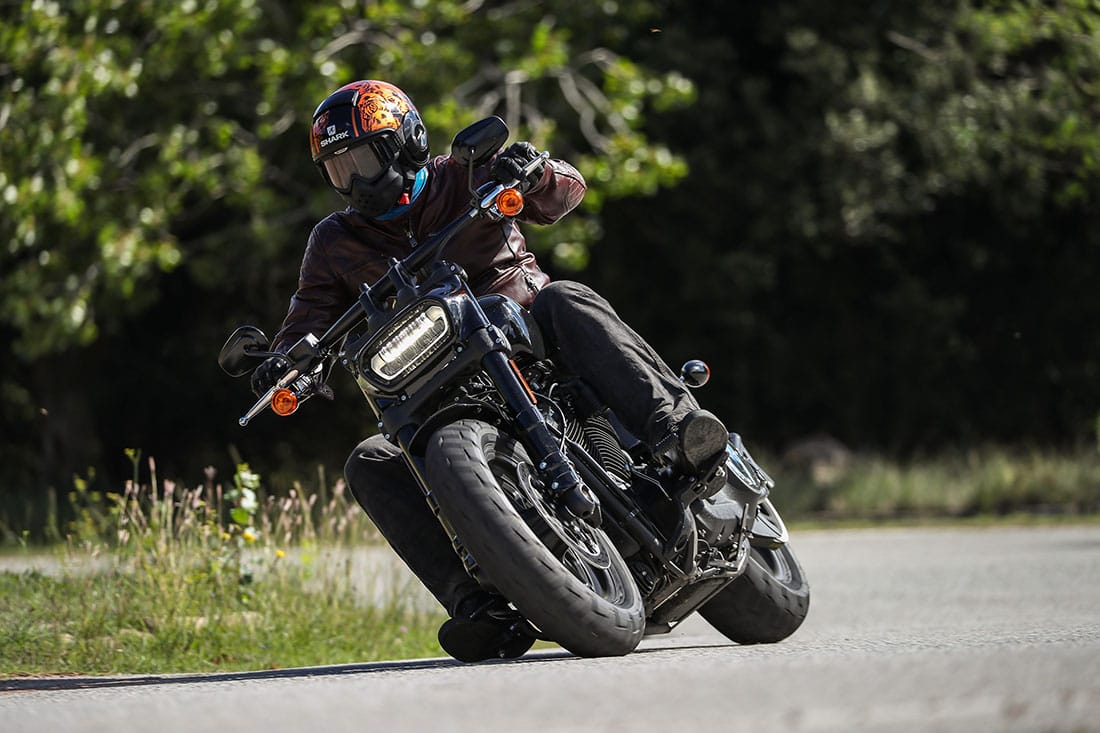 On board, though, the Fat Bob proves itself to be very accommodating. Compared to the Street Bob, the riding position is much more neutral. Hands firmly gripped on the wide flat bar, I unleash all the power of the 114ci engine and the seat (710 mm height) has a little backrest which helps to support the strong acceleration.

The Fat Bob is the “sport” bike of the new Softail family. It has an upside-down front fork and twin front disc with four piston calipers. On the instrument panel, the rev-counter takes the main position.

The lean angle is now 31° on the right side, and 32° on the left side. The Fat Bob now weighs 306 kg, which is 16 kilograms less than the previous generation. That, combined with the new chassis, gives a completely renewed riding experience. The Fat Bob is fast; The Fat Bob is fun; The Fat Bob can take corners. 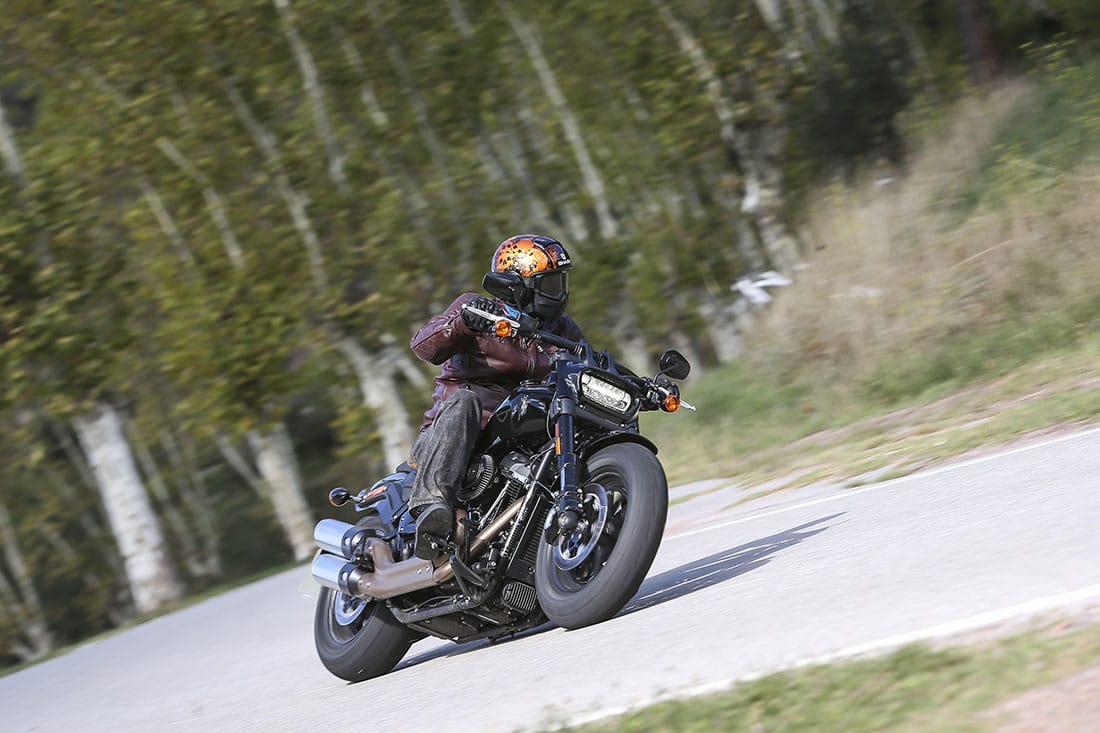 Obviously, while riding hard, it’s still possible to find the ground clearance limits. But it does not really matter because you can still ride at a very good pace without touching the ground. The new chassis benefits are instantly appreciable: precise steering and a solid, steady motorcycle in any circumstances.

The new Fat Bob will be able to attract the young and dynamic Harley rider, but is now a natural step for the user of a Japanese or European super-naked who wants a slightly more relaxed and comfy bike, but who doesn’t want to give up on riding pleasure. Downsides? The pillion comfort is on the firm side and the speedo is not very easy to read. 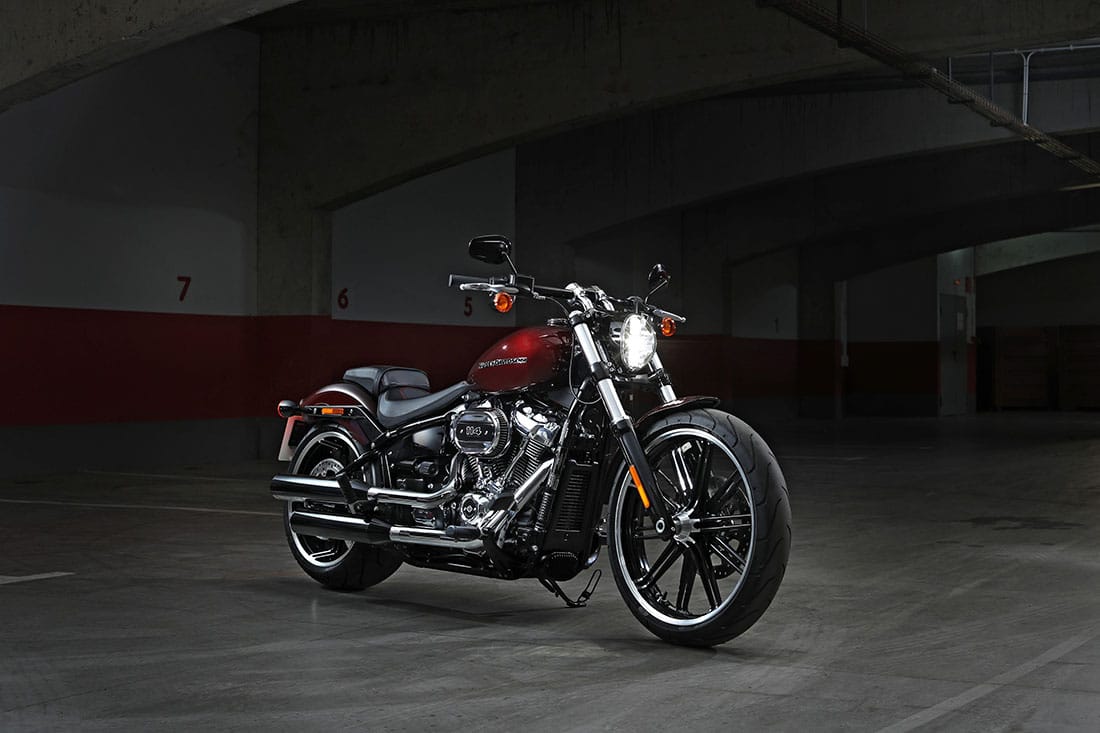 The new Breakout is supposed to have more lean angle than the previous generation but as we started our ride in rain and on wet roads, we managed to touch the foot-pegs and the side-stand while cornering. Good news: the new generation of Michelin Scorcher’s do the job; bad news: the lean angle is still not the Breakout’s main asset!

Launched in 2013, the Breakout was a mix between a cruiser and a drag bike: with its fat tire (240 mm!) and its narrow front wheel (210 mm), it screams the word “acceleration” at every robot, which is one reason to prefer the 114ci engine over the 107ci! 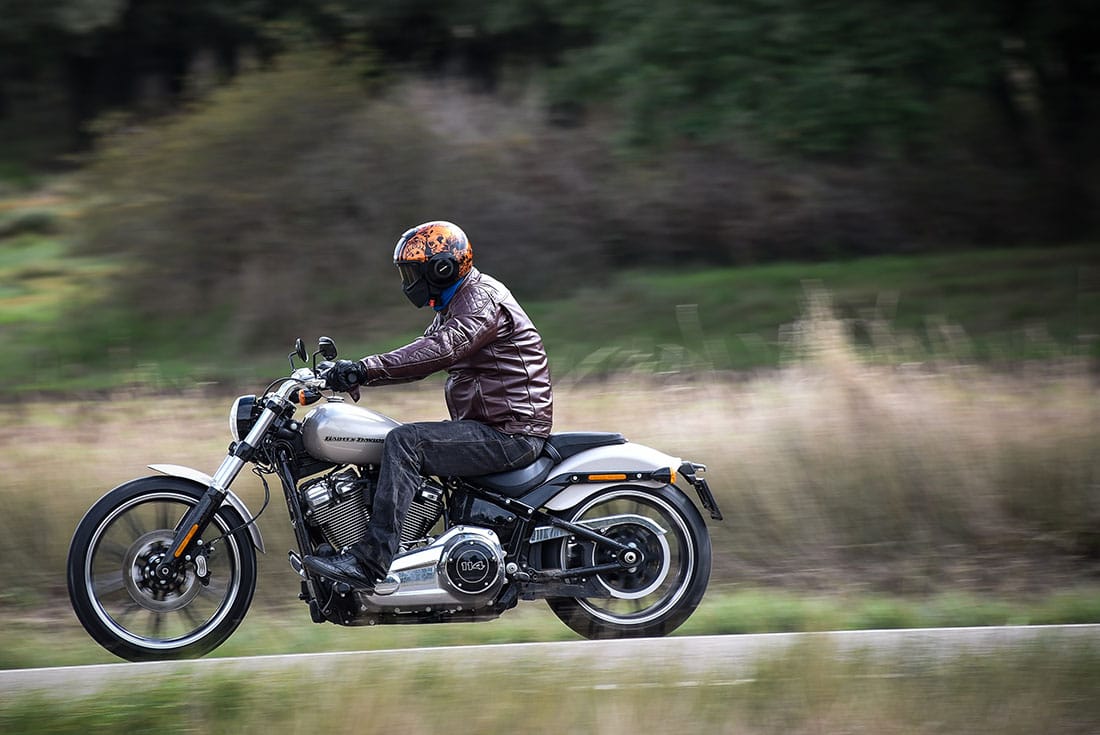 We already mentioned the new chassis; the Breakout also has a new steering angle (34° instead of 37° on the previous generation), the fuel tank is smaller and thinner (13,7 litres instead of 18,9) and together these enhance the Milwaukee Eight V-Twin presence. The Breakout also has a very distinctive LED headlight. The instrument panel is quite minimalist (not much bigger than an Apple watch!) but it delivers the main information, such as rev counter, gear position, fuel range and so on. There is even a fuel gauge.

With a 26,8° ground clearance, the Breakout cannot promise to enjoy cornering. The chassis is obviously better than before and it has a better front end but its limited capabilities reduce the benefits of all these improvements. With 305 kg’s, the weight has been reduced by 16 kilograms. In other words: the Breakout is a poser, and a dragster. The 114ci engine is a peach; smooth at low revs and very consistent with throttle wide open. The acceleration is solid – under the wet surface conditions that we experienced we had a few power slides, but fortunately they were easy to control with the 1695 mm wheelbase (until the second gear hits 105 km/h near the rev limiter!). A proper dragster, this Breakout, which you can also enjoyed along some fancy boulevards at 50 km/h with just over 2000 rpm in third gear, is just waiting to teach the next Ford Mustang or Camaro that pulls alongside a power lesson. 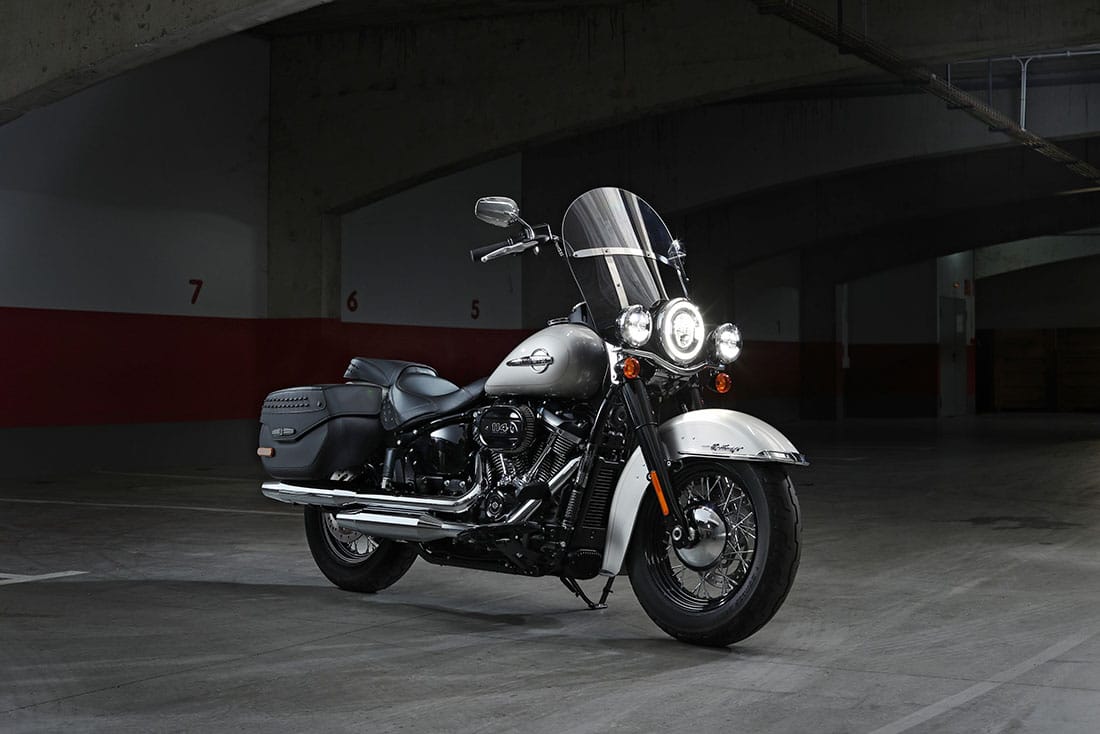 The Heritage Classic is an icon on its own within the Harley-Davidson Softail range. It’s been available for so long (it was launched in 1988) and it has been produced with all the Big Twin engines: 1340, 1450, 1585 and 1690 cm3! It now has the Milwaukee Eight mill and this seems a logical evolution to me.

However, the new Heritage Softail is just much more than a new engine. The philosophy has also changed: the bike is now more mature. The inspiration from the 1950’s; white side-walled tires, fringed and nailed saddlebags, white and candy colour scheme, is gone. 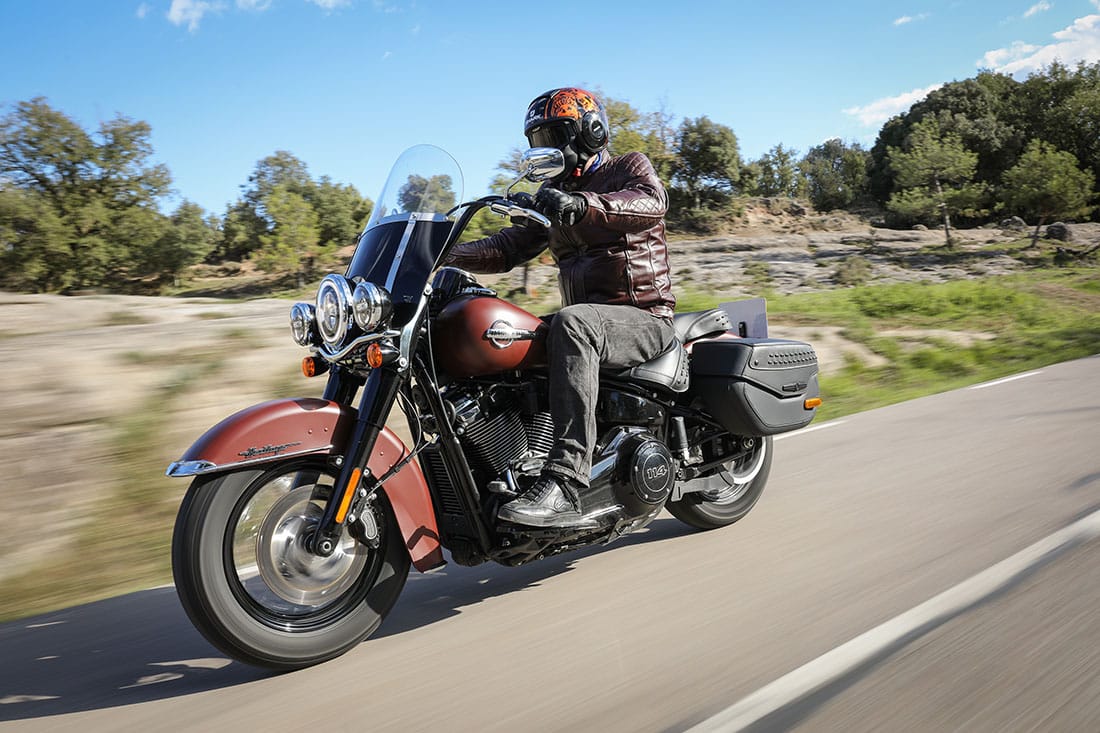 Now, the Heritage Classic goes for a black colour scheme on the engine, wheels and frame. Less chrome, dark colours and the lower side of the wind-screen (easy to detach, in less than 5 seconds) is also tinted in black – a bit like the police and military bikes from the 1940’s. Harley calls this a “Young Elvis” posture.

The Heritage Classic comes standard with cruise control, and the saddlebags, now more rigid and sealed, can be removed: it just needs a tool and two minutes of your time. One thing is sure: with this colour scheme and its three LED headlights, the Heritage Classic stands apart.

The seat (680 mm height) is wide and comfortable. Handlebars are slightly high for me but with the narrow tires, the handling is good and easy, even at low speed it has great self-stability. The 330 kg’s (16 less than the previous generation) are not very difficult to tame, except while parking the bike. 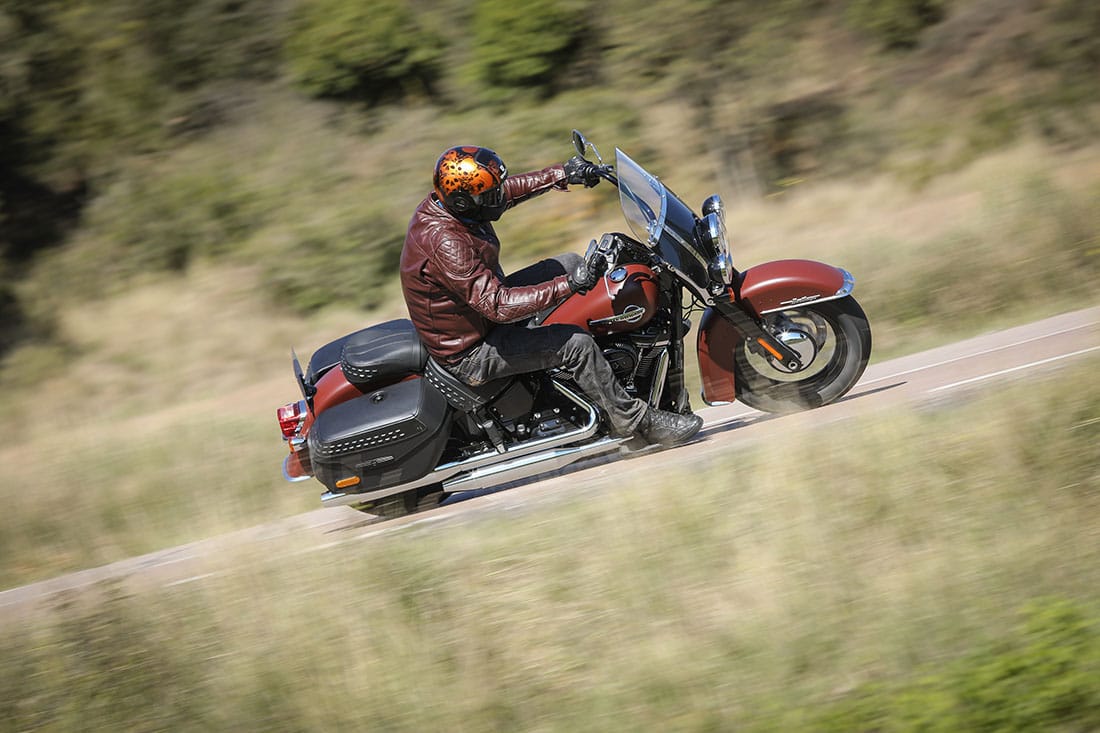 Even with the 1585cc engine, the Heritage Classic has always been the kind of bike, which was perfect for lazy touring. It can still do that, but it can also do so much more. Thanks to the new chassis, the Heritage Classic can now support a bit of dynamic riding and delivers much more pleasure, thanks to a very precise front end. I reckon writing “Heritage Classic”, “dynamic riding” and “precise steering” in the same sentence does not feel so natural, while reporting about a Harley-Davidson.

However, the Heritage Classic deserves a proper test ride to be convinced of its new dynamics. This is the perfect incarnation of the light Tourer, with just enough kit to enjoy the ride, and a serious dose of style.

Downsides? The saddlebag capacity could have been slightly bigger and for highway touring, the windshield could handle a couple of centimetres more for better wind protection. Besides that, the Heritage Classic is a great combination and to be honest, it’s my favourite of all the four bikes tested!