For 2018, the Ducati Monster 821 enjoys some new aesthetics and technological improvements. Nothing really major but enough to renew interest in this great looking, mid-size, iconic, naked bike.

The past six months has been a bit lonely for the Ducati Monster 821. The recent launch of the Monster 797 brought another entry model into the range and last year, the Monster 1200 was revamped enough to lose its rather clumsy chassis and become much more convincing and thrilling to ride. In between, the Monster 821 was slightly lost in a gloomy mood, suffering from of a small identity crisis. So Ducati then decided to bring more sparkles to its life and I had an opportunity to ride this new version recently. Our location was in Italy, near Rimini, both on the Adriatic coast and on the Apennines mountain roads, on an autumn sunny day. Not bad at all, you might even say, IDYLLIC! 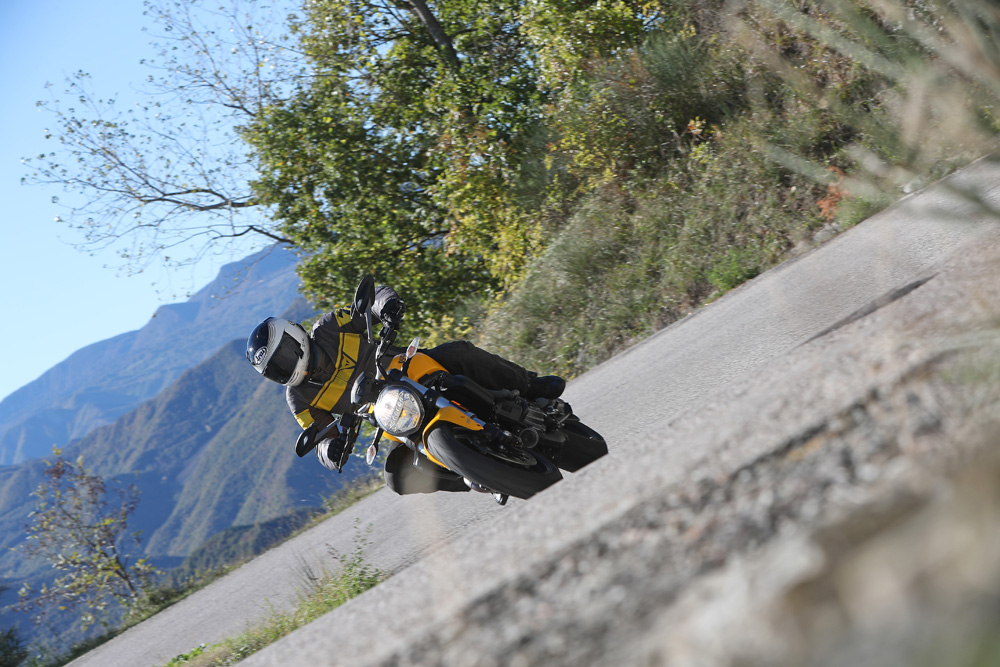 October, 2nd, 1992: at the Cologne Motor Show, the biking brotherhood discovered the new Monster. The machine was an air-cooled 900 twin with a rather modest output (73 hp), but was still minimalist, evocative and sporty, enhancing emotional and physical sensations. 25 years later, the Monster family has been a genuine hit with the Ducati fans and the bike is still as popular as ever.

Fans also gave credit to the yellow (Giallo Ducati colour, code Pantone PMS123) as it appeared first on the 1994 Monster 600 and represented a major part of the customer choice. 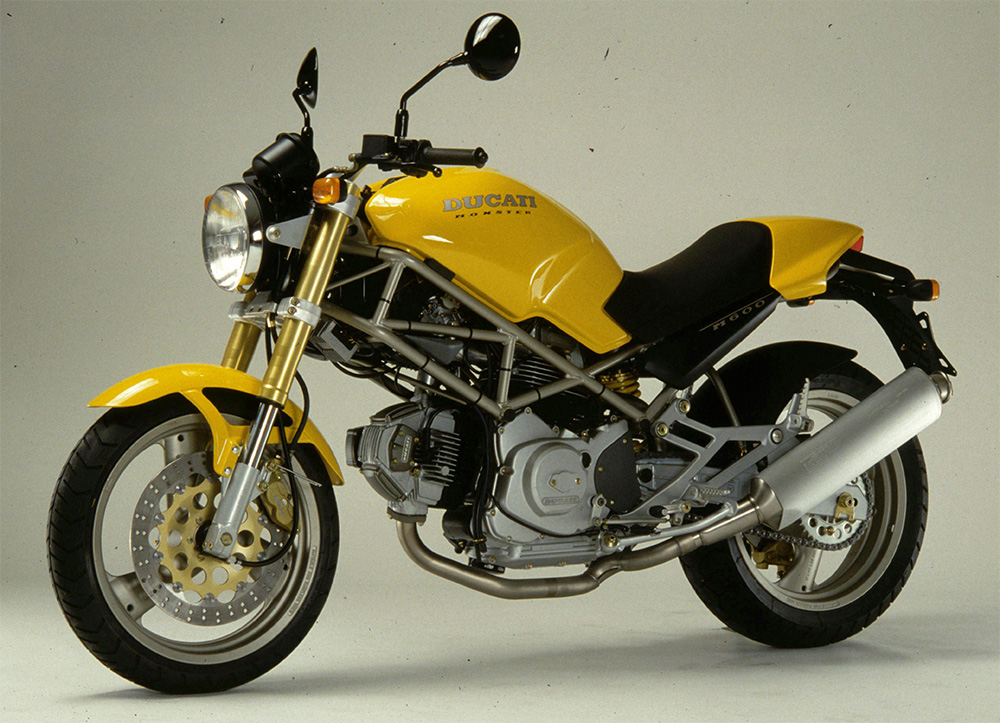 The yellow was part of the Monster range until the end of the 2004 and for some, the yellow scheme has been missed for about 13 years: well, not any more, the ‘yellow submarine’ is back – welcome back! I should tell you though, that the yellow scheme is not the only way to recognise the 2018 Ducati Monster 821, as red and black are also offered in the colour chart, but for me, it has to be YELLOW! 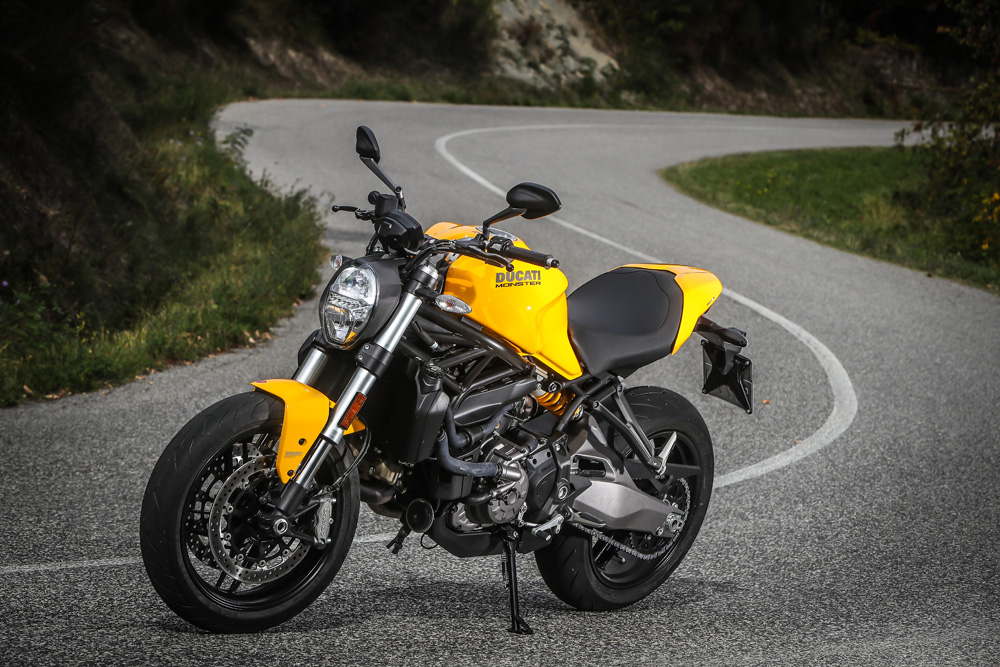 First: a new headlight with some LED parts. 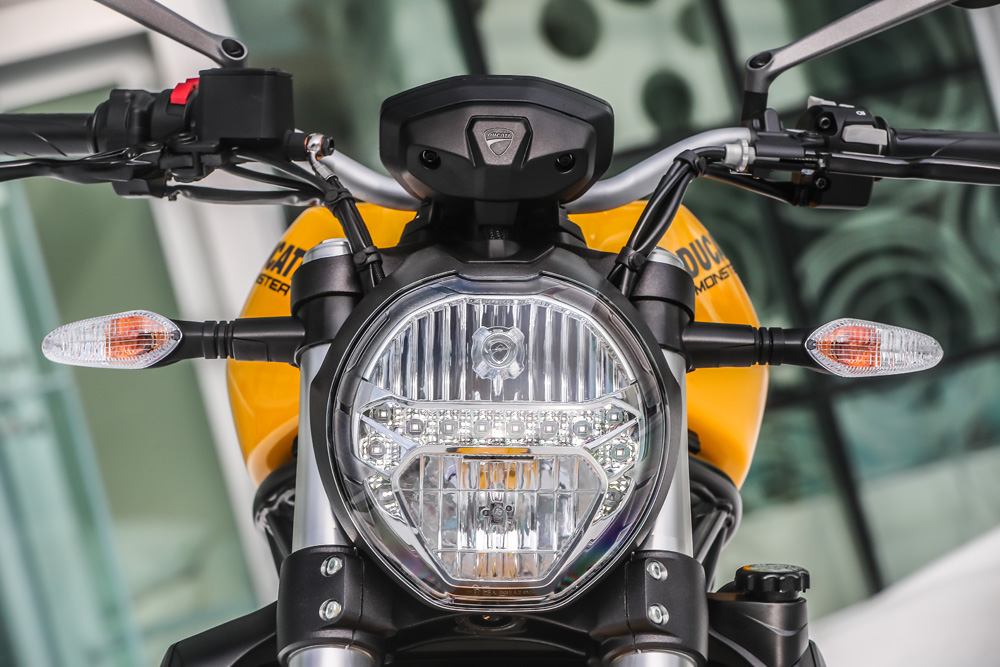 Second: a new seat and tail cover – slimmer than before. 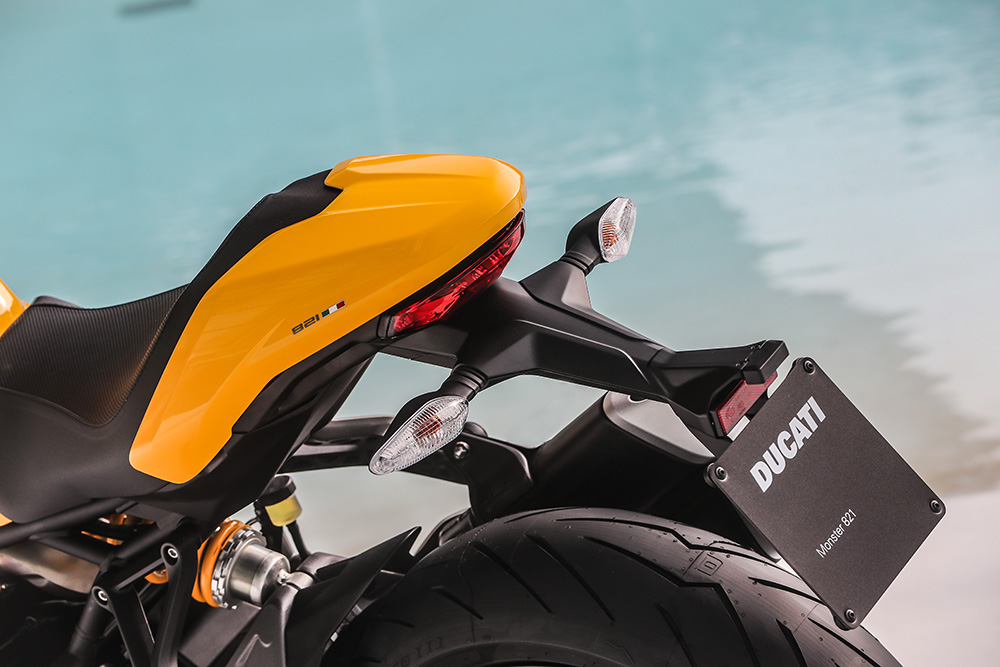 Third: a new exhaust, thanks to the Euro4 regulations. 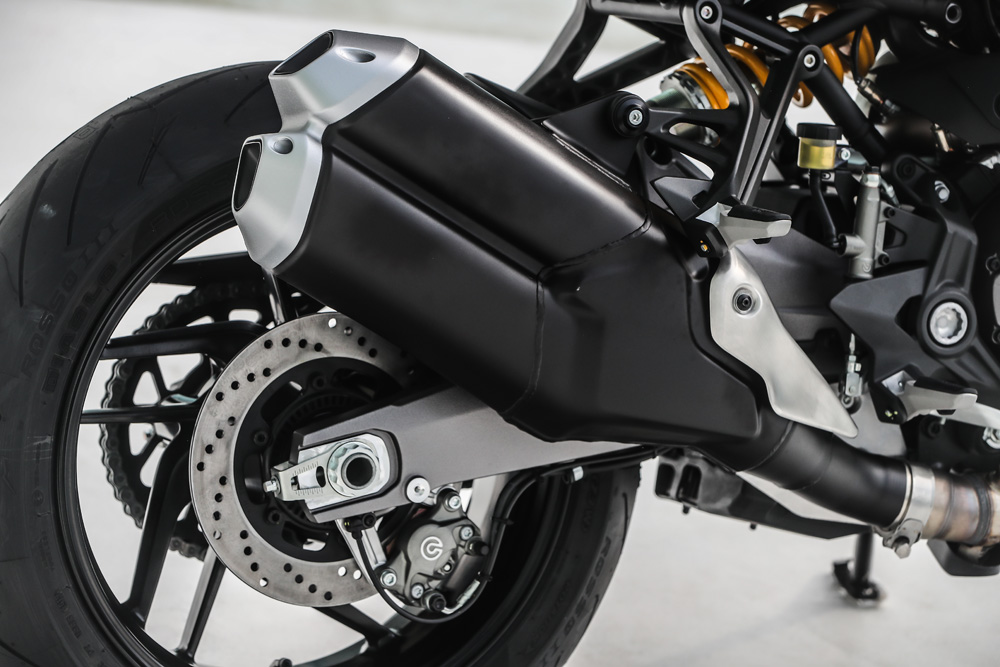 Four: a new dashboard, which is now a full TFT colour tablet, including some useful information from a fuel gauge and a gear indicator. 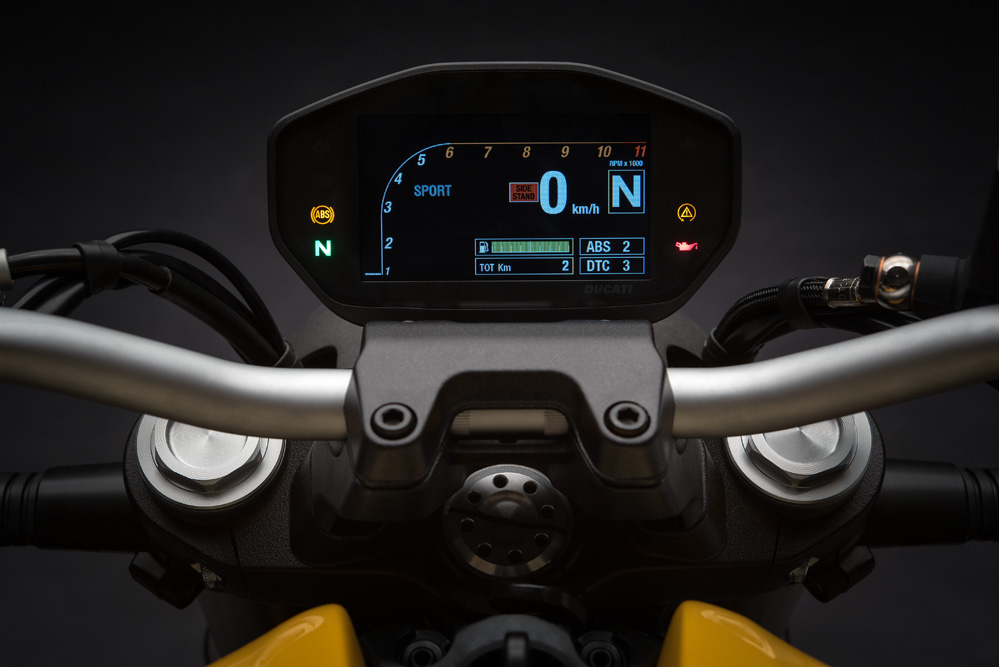 Five: some new footrests – Ducati listened to the critics on the previous model as some riders complained they couldn’t put their foot properly on the pegs and had to ride with a position which could be compared to a duck suffering from poliomyelitis! 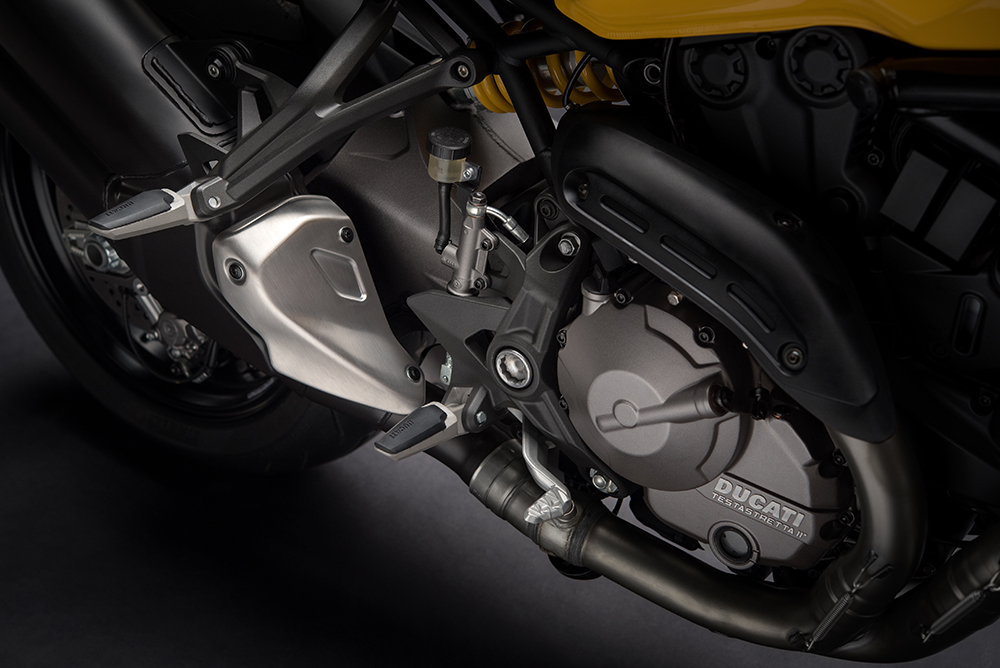 Six: the new fuel tank hinge, which is like the one fitted on the old Monster! 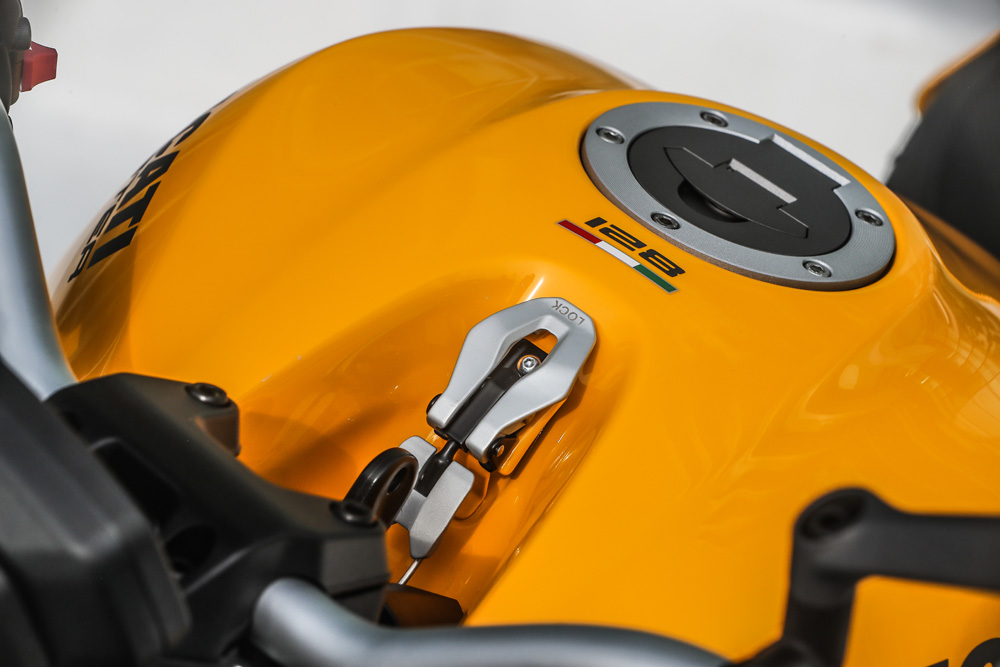 Seven: the new up & down quick shifter, although it’s an optional fitment. 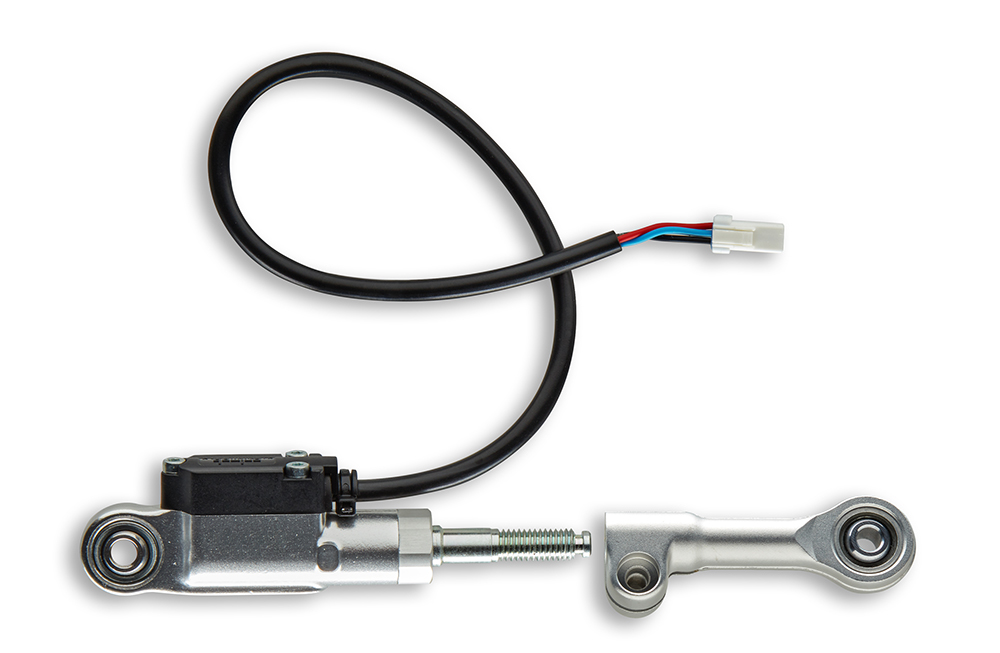 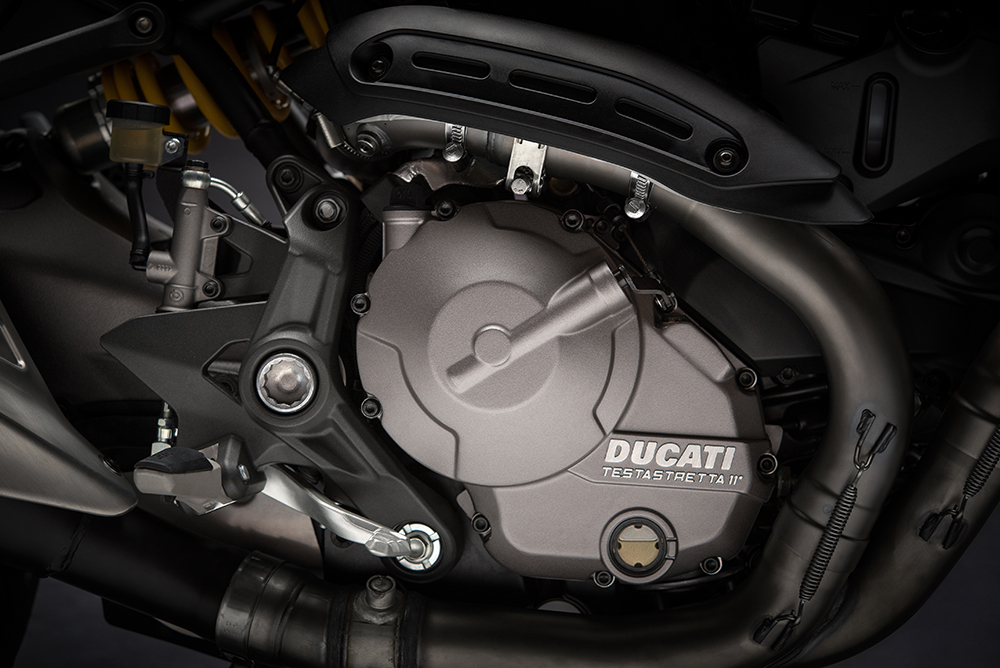 Let’s say it straight away: despite the weight being increased by one kilogram, the minimal loss of power is impossible to notice as the peppy V-twin has all the boxes ticked and delivers a lot of pleasure. It’s smooth enough to cruise easily on the boulevards at 3000 rpm in 4th gear; has a good mid-range torque between 4 and 6000 rpm and is entertaining enough to enjoy exploring the rev limiter. The three engine mappings bring the Monster their own personalities. The Urban mode limits the power to 75 hp and the throttle response is really suave; the Touring mode delivers all the 109 hp but with a progressive response. However, as the global power is not that impressive, I spent most of my day riding on the Sport mode, which has 109 hp and a quick response. On the Italian roads, which unfortunately are poor on grip, the 8-level traction control has to come into action more often than not. 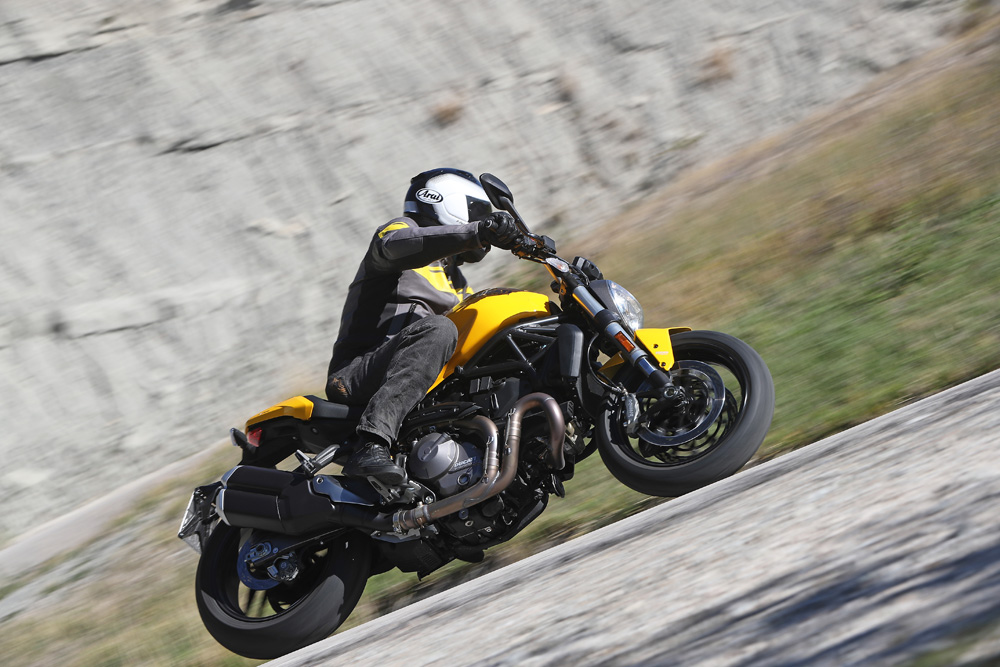 We did not ride in a touring fashion, so it’s hard for me to say how the 821 will fare. However, the bike has a really good feel to it; is light (188 kg dry, 206 kg full); narrow (the fuel tank has lost one litre at 16,5); has a torquey engine; the riding position is slightly leaned over the front (enough to face the wind but not to put more pressure on the wrists) and the new foot pegs are (at last!), much more comfortable. I can see myself enjoying the Monster 821 on the Blyde River Canyon roads, although, while pushing harder, I could handle an adjustable front fork, because as it is, it’s slightly unbalanced being much softer than the rear shock. The Brembo radial M4-32 callipers do not prevent the sometimes brutal initial byte but is probably fine for a large cross section of potential riders. 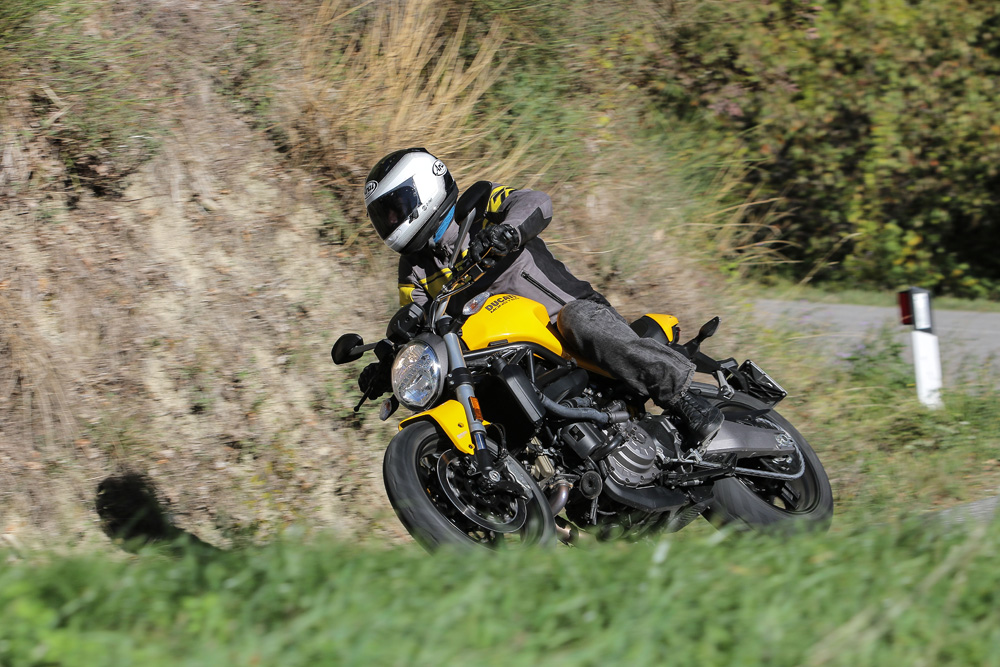 The new Monster 821 is not the most exhilarating bike to ride but it’s easy and perfectly balanced. Its name is an icon on its own, as are its looks. It’s fun enough and fast enough to compete, heads up, with the likes of Aprilia Shiver 900, Kawasaki Z900, Yamaha MT-09 and Triumph Street Triple 675.