35 years after the iconic Z1, this new 900 Kawasaki will warm the hearts of biking enthusiasts and stir up plenty of nostalgia for the good old times. But is the Z 900 RS a skilfully redesigned Z 900 or a whole new bike?

To be honest, the motorcycle revolution started with the 1969 Honda CB 750 K0. Inline four cylinder, electric start, disc brake and 67hp: the Honda brought power and performance simultaneously, reliability and with a real ease of use and that was more than enough to change the rules in an old world dominated by placid German, awkward American, and fragile British motorcycles.

If Honda invented a new world, Kawasaki made it better – Much better!! In 1972, the Kawasaki 900 Z1 raised the game with more capacity (903cc), more power (82hp) and more technology (DOHC engine). The Kawasaki was definitely the Japanese bike for the real men. With a weighty flywheel, its engine delivered a raw and instant kind of power. Add an amazing build quality and that was enough to become a legend in its own right. Nowadays, Kawasaki estimates that between 70 and 80% of the 900 Z1’s built are still in running order, and you can expect to pay up to R 300000 for a mint original Z1. 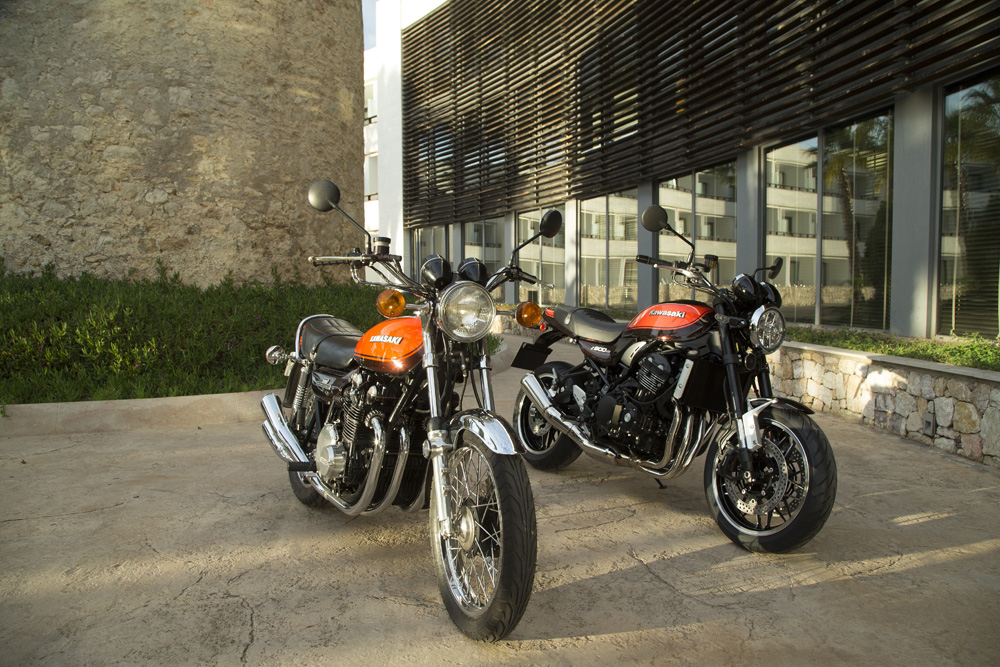 There is a real move to retro bikes. Hence, for quite a long time, the market has been full of machines which could claim some historical heritage and some genuine posing value, while propped on their side-stands in front of a trendy pub.  Truth is, many are slow with below average riding qualities. This is not the case with the Z 900 RS.

This is much more than a redesigned Z900

For Kawasaki, the Z 900 RS is a tribute to the 900 Z1. A tribute that keeps the spirit but delivers modernity. That’s why the original cradle frame and the twin rear shocks are not part of the package. The frame is not from the Z 900 either, the trellis frame has been totally re-designed with a higher front and a lower end section, and both the fuel tanked and seat have been re-designed to a classic retro style. 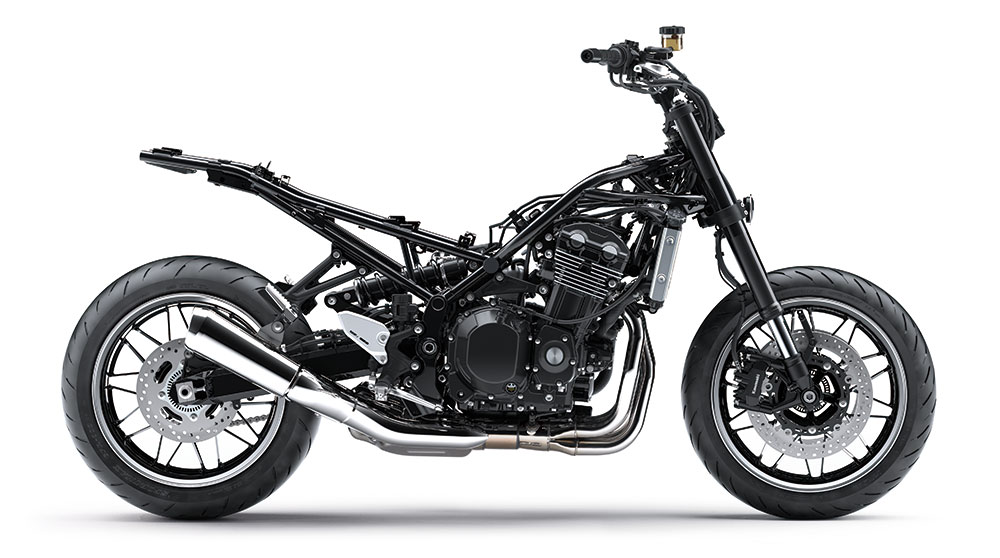 The Z 900 RS is a classic yet modern bike. Lights are full LEDs and the tail section has been specially designed to give the same old bulb halo, instead of the crowded look that you get with the LEDs. 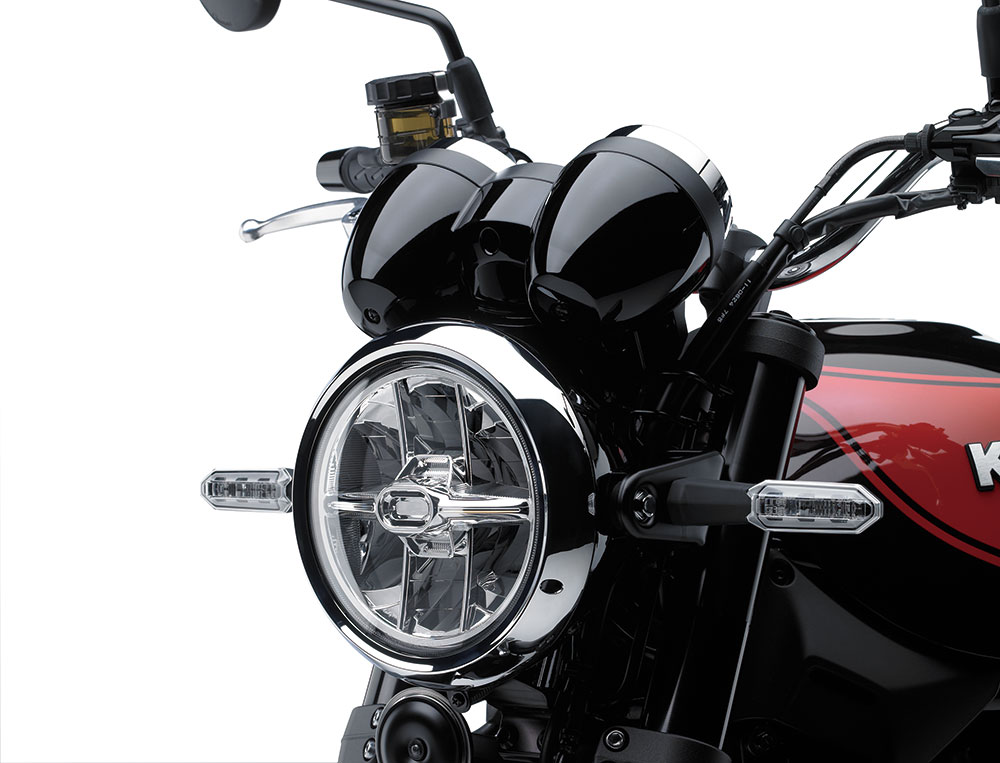 The old-style dashboard keeps the same max speed indication as the original Z1 (240 km/h), and the centre parts of the dials looks exactly the same. However, a large digital screen sits in between and shows many features such as a fuel gauge, a gear indicator, traction control level, as well as air temperature, fuel range, and average + instant fuel consumption. 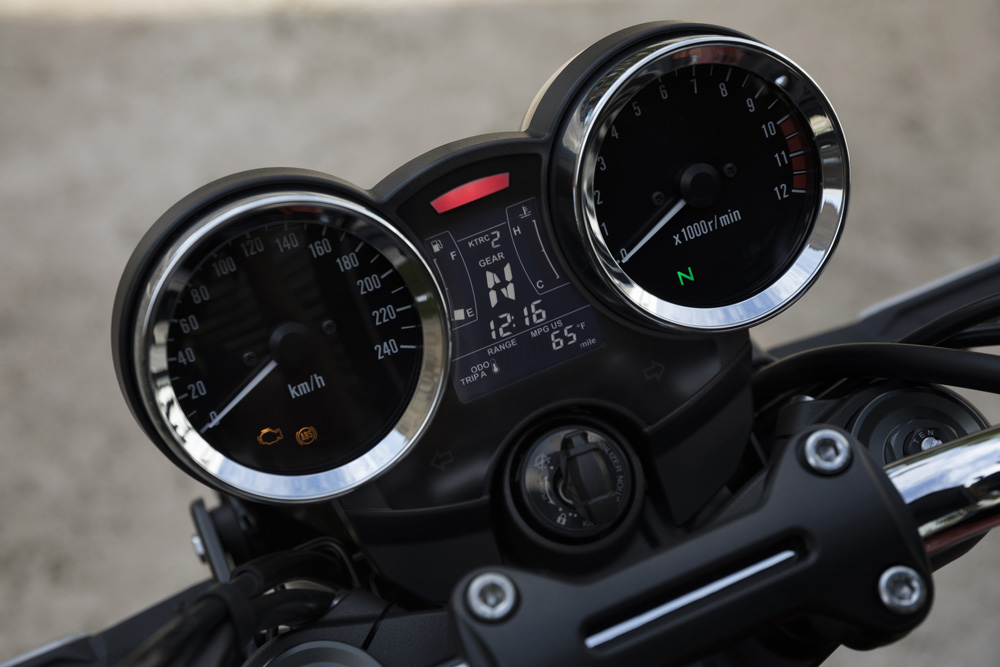 Everything is easy to access thanks to a left hand button. With no fly-by-wire throttle, the Z 900 RS cannot offer any riding modes to follow the current trend. That does not really matter anyway, as the lovely engine characteristics all but render such wizardry redundant. 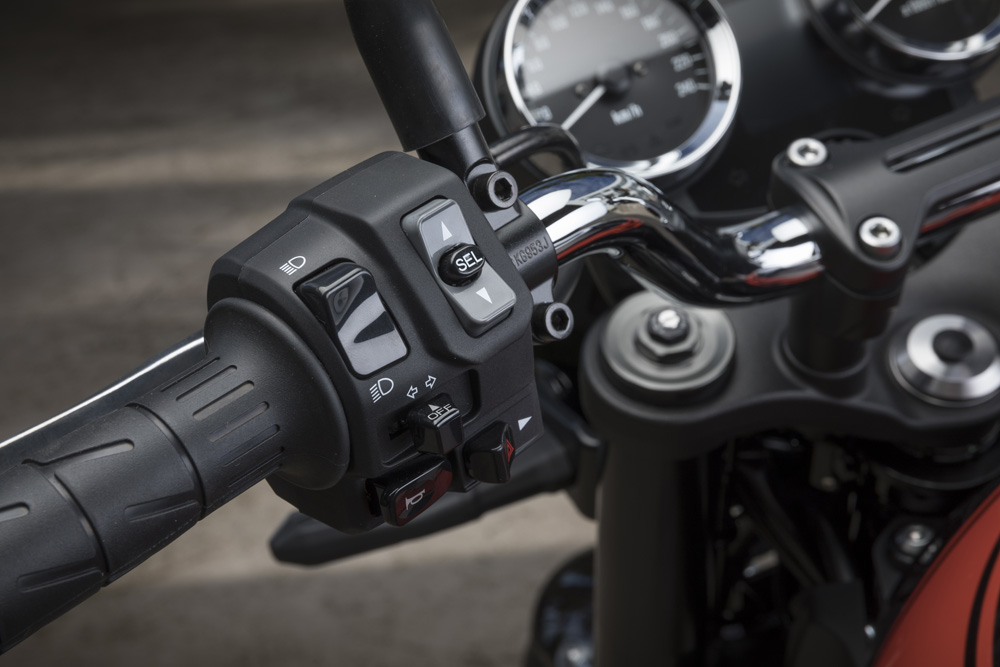 Aside the obvious overall design, the styling department went very far indeed, to pay homage to the original Z 1. The painting looks the part, although, in the old times, they used a bit of arsenic powder to get that sparkling effect. Environmental laws became strict, but modern technologies allowed Kawasaki to keep the same colour attitude. The seat strap is fixed by a part that has the same plate and the same crosshead screw as before. If Kawasaki never considered a four pipes exhaust for weight and cost reasons, they studied 20 prototypes (included a dual pipe one) to get a perfect deep exhaust note. 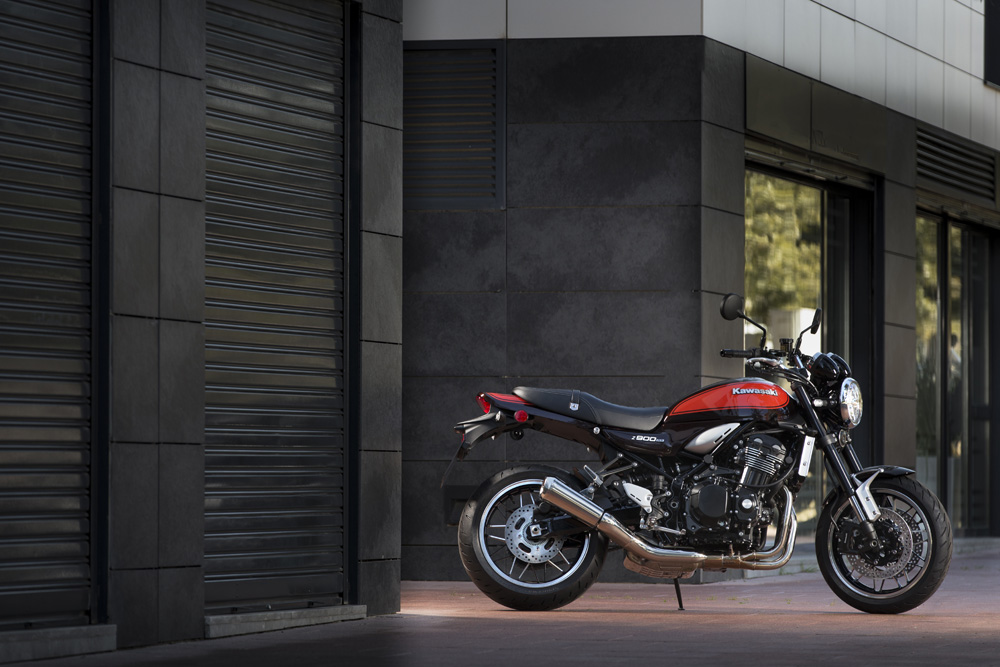 Besides the green Café version, the Z 900 RS will be available in three colours – matt green, black and orange/brown, so you should find one that suits your tastes.

The 948cc engine (74.3 x 56mm) is also slightly different from the one mounted in the Z 900, although they obviously share the same overall conception. The torque is nearly the same (around 98Nm) but available at 6500 rpm instead of 7700 rpm on the Zed. The power, however, has been reduced from125 hp at 9500 rpm to 111 hp at 8500 rpm; the compression ratio is lower (10.8:1 instead of 11.8:1); the cam shaft is different and the flywheel is heavier by 12%, which delivers more instant torque. The gear ratio features a shorter first gear, and there is still a light “overdrive” effect when engaging sixth gear. 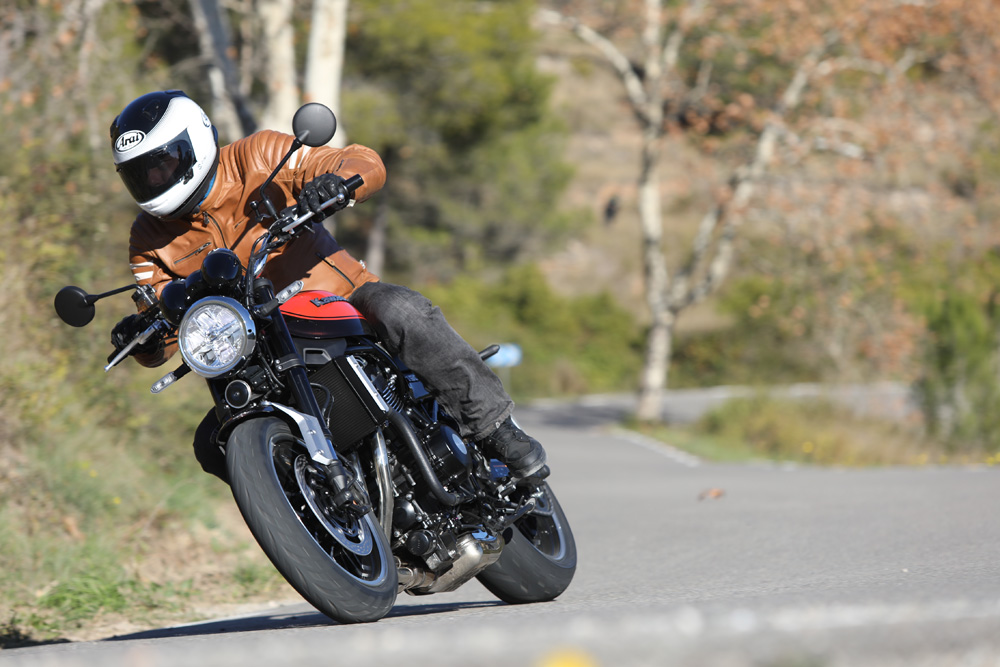 All of this changes the riding experience. Between the Z and the RS, the peak power difference is easy to notice as the retro-bike does not have the engine revving freely to the red line with a deep intake sound. The RS is more linear between 7 and 10000 rpm but below 7000 rpm, it offers more power and torque than its “modern” naked sibling. 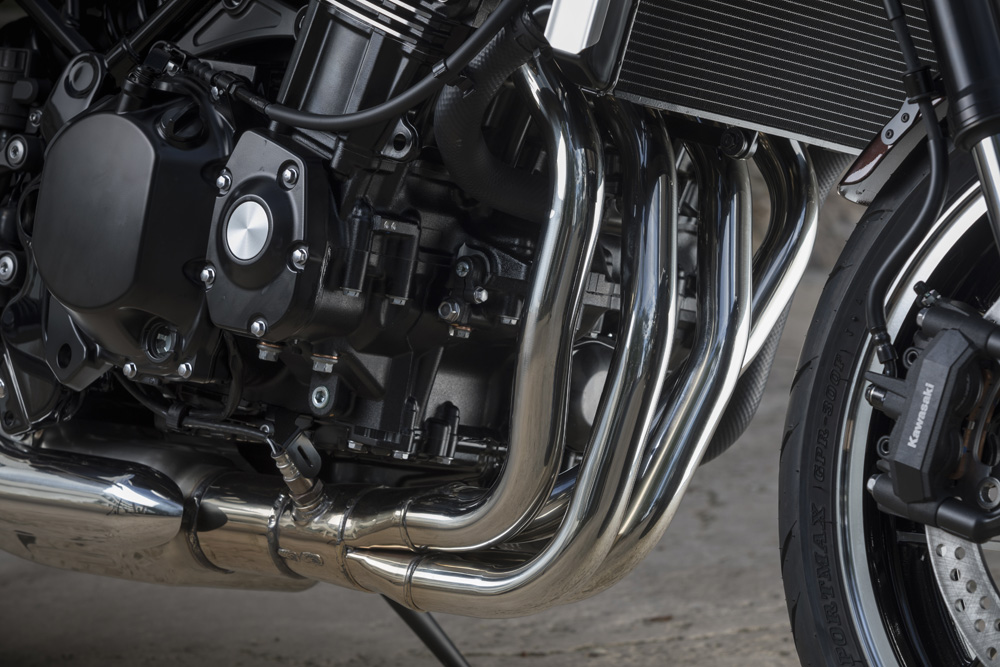 If we all admit that an average Z 900 RS fan is looking for more everyday life riding pleasure rather than a succession of thrilling acceleration, then the RS scores a big mark. In real life, while gently cruising on the Mediterranean coast south of Barcelona or winding through a variety of mountain roads, the amount of usable power is always a source of great fun. The inline four pulls strongly from low revs and the acceleration is always very consistent. A great engine then and definitely on par with the bike’s spirit and the Z1 heritage. 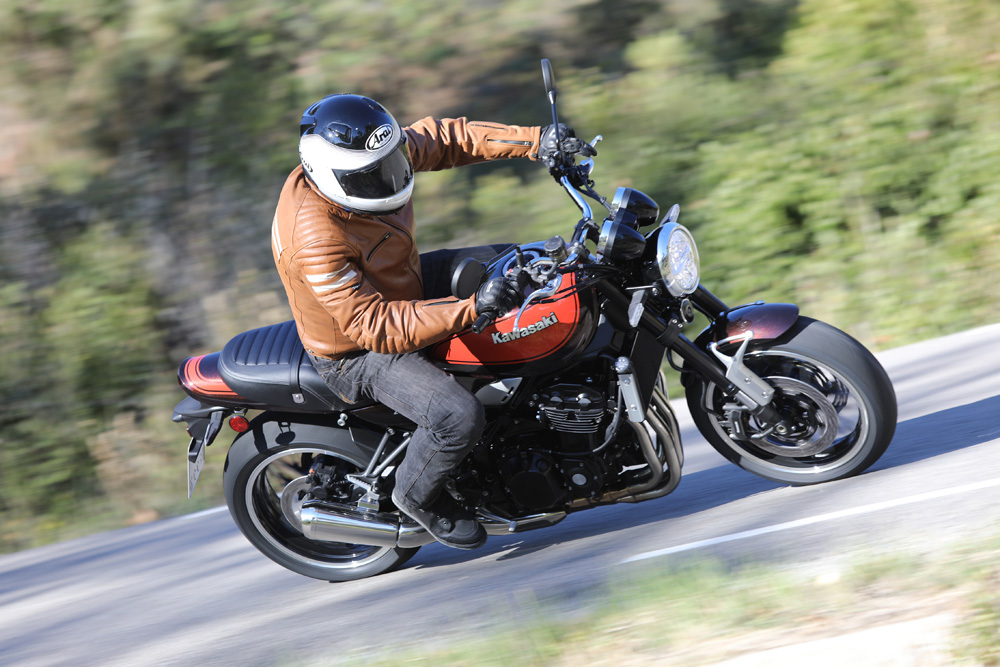 I was positively surprised by the overall level of comfort on this bike, which has never been one of the Z family’s qualities. The riding position is very neutral, with handlebars higher and closer to the rider than on the Zed. The bike has smooth controls and an assisted clutch. The seat is great, with a small step which aids comfort while cruising and when pushing hard. Great news also comes from the suspensions department with a 41mm upside-down front fork (travel: 120mm) and a single-shock rear absorber (travel: 140mm). They are both very well mannered and decently damped. They are even a bit soft, but not wallowy in any way and the good chassis provides comfort and riding pleasure. Unlike the Z 900, the RS version features radial front brakes, the radial brakes are set in the same way: good braking power but no brutal initial byte. 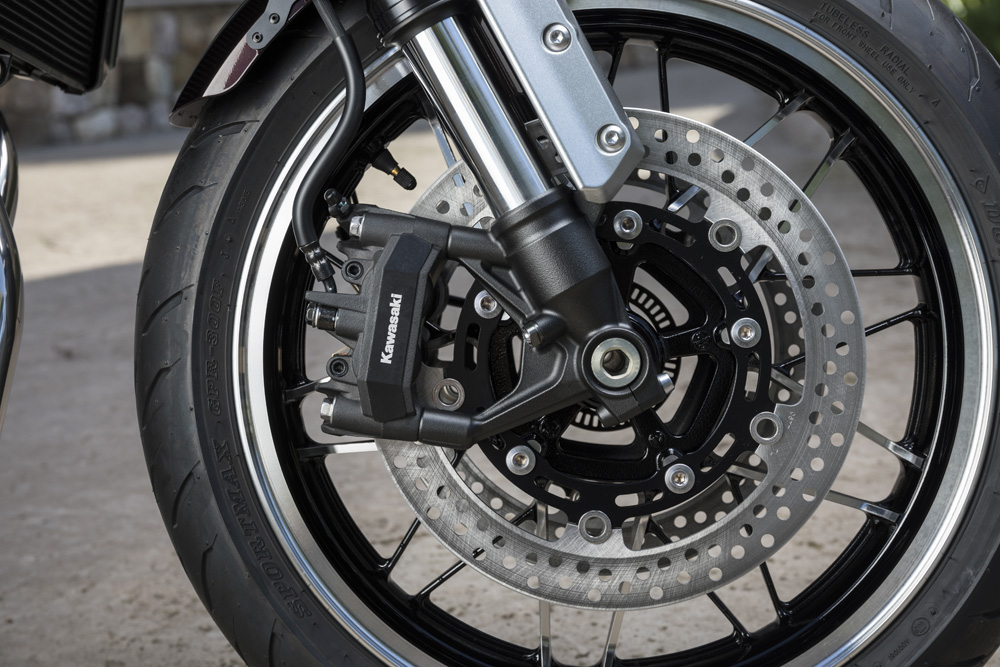 All that gives the 900 RS a dual personality. Easy to ride (once in action, the 215 kilograms just disappear) and absolutely neutral bike to handle, which should appeal to the urban commuter or for the beginner rider. But, different to many retro-bikes, the Z 900 RS can also handle a higher pace and still deliver lots of fun with much more ground clearance than a Honda CB 1100 RS; more mechanical character than a BMW R nineT and more agility than a Triumph Thruxton, which can be seen as the RS’s natural competition. While pushing harder and harder, the only downsides will come from a riding position that is too upright, which minimises loading the front end and the riders movement on the bike. But then, if that is what you want, you start to exit the Z 900 RS’s design parameters and purpose. 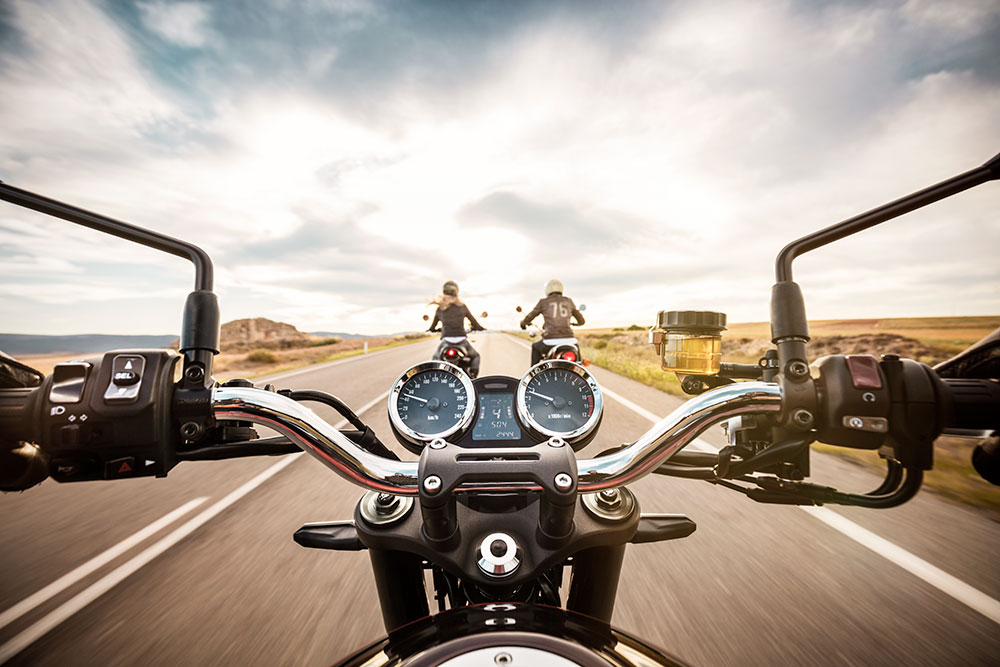 The Z 900 RS has a lot of appeal. It’s a great looking bike with a historical soul, but mixed in with modern technology and it has top quality components and finishes. It’s a great city bike; it’s extremely easy to ride; it looks the part and it can also handle some sporty moments on the tail of sharper bikes. It does not claim to be a long distance tourer (although the engine will handle it forever as it runs at 4700 rpm in 6th gear at 120 kph), but, despite the wind exposure, the overall level of comfort is truly amazing. That’s a lot of in-depth features for a bike that will be first noticed for its looks, but will definitely deliver much more…