“This is a revolution!” This expression was made famous by the late Steve Jobs but it could be assignable to Ducati too. In 2010, the Italian firm launched the first generation Multistrada 1200 in the Canary Islands, in the middle of the Atlantic Ocean. That was a proper revolution, a high-powered, 160 hp, high-techno super-trail bike. After the rather erratic 1000 & 1100 air-cooled Multistradas designed by local ace Pierre Terblanche, the 1200 Multistrada was a real game changer. 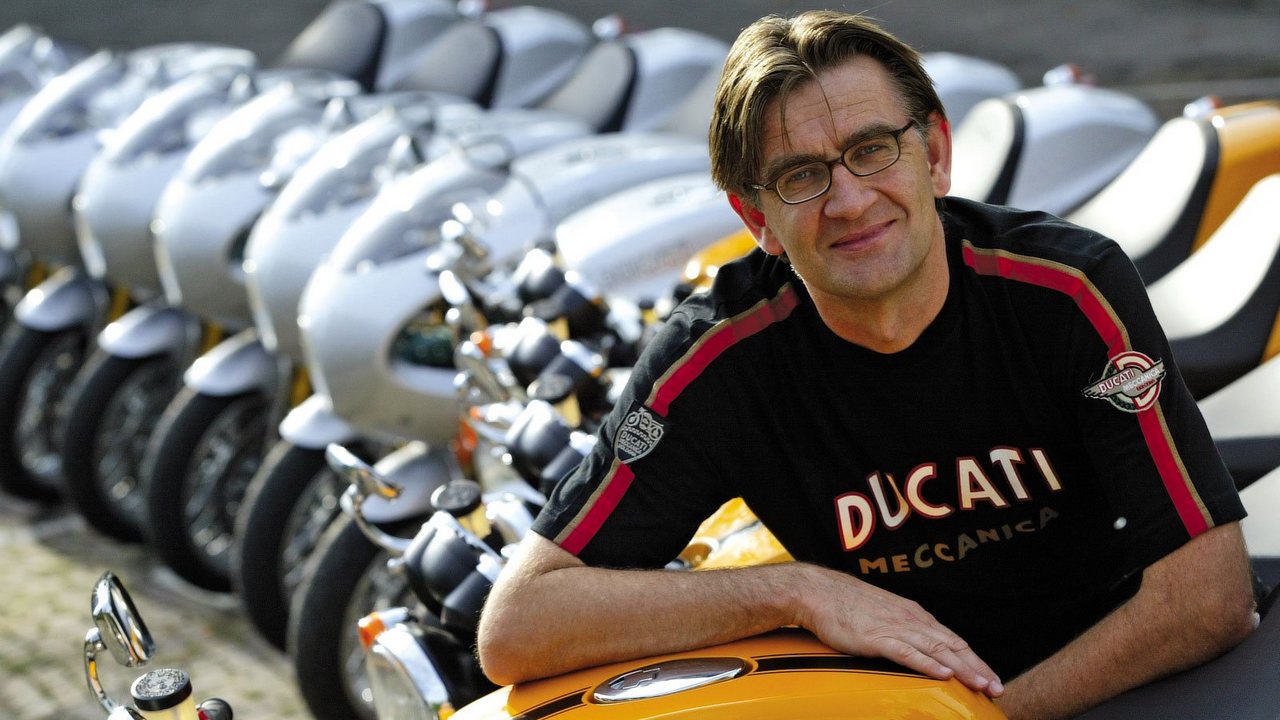 Back then, big capacity trail bikes were very capable and efficient, but slightly boring to ride on the road. Since then, many things happened: the big GS’s gained power and are more entertaining to ride, the Germans also entered the high speed trail family with the S 1000 XR. The Austrians pump adrenaline too, with the 160 hp Super Adventure 1290 range. Triumph now has (for the ’18 range) more than 140 hp in the 1200 Tiger. Only Yamaha remains outside of the fun with the ageing XTZ 1200 Super Ténéré, which Yamaha see fit to limit electronically, for some inexplicable reason!

In terms of sales, no manufacturer has managed to remove the crown from the R 1200 GS’s head. However, since it’s launch in 2010, the Multistrada has managed to sell over 10 000 units worldwide, making it a serious contender in the super-trail bike sector, and appealing specifically to a rider with a taste for style, comfort and performance.

The range consists of a standard version, the 1260 S, the 1260 S D/Air (fitted with airbag sensors from Dainese) and the racy Pikes Peak (with a special livery, carbon parts, Termignoni exhaust, Öhlins shocks and 6 kilos less), we had the chance to test the S version on the mountainous and sunny roads of the Canary Islands. A great ride, indeed!

A lot of subtle changes

The bike looks rather similar to the 1200, cosmetic changes are quite minor, you can distinguish the new Multistrada, as it’s easy to spot the new “1260” logos on the side fairings. Other subtle cosmetic changes include; new rear LED indicators and rear hand grabs, new engine covers, and finally new wheels and new TFT instrument panel.

The Ducati Multistrada 1260 is also a Y2K kind of bike: launching in February 2018, a new Ducati Link App will work a full telemetry system, allowing you to record your rides, your speed, bike set up and lean angle. A social network bike, as you’ll be able to share all these on your favourite social network. A reward system gives prizes to users who reach several different goals based on the use of their motorcycles and different riding experiences. So, who will be the first to take their Multistrada 1260 up Sani Pass, to get a special bonus?

With the keyless device in your pocket, it’s time to get on board. The seat can be adjusted from 825 to 845 mm but the Multistrada remains quite narrow. The new instrument panel was designed with two goals: have more technology and make that technology easier to select and adjust. These goals were achieved, as the left hand push buttons make it very logical to select a dedicated riding mode, or to enter and go beyond the pre-selected set-up and make your own preferences in terms of suspension set-up or throttle response. 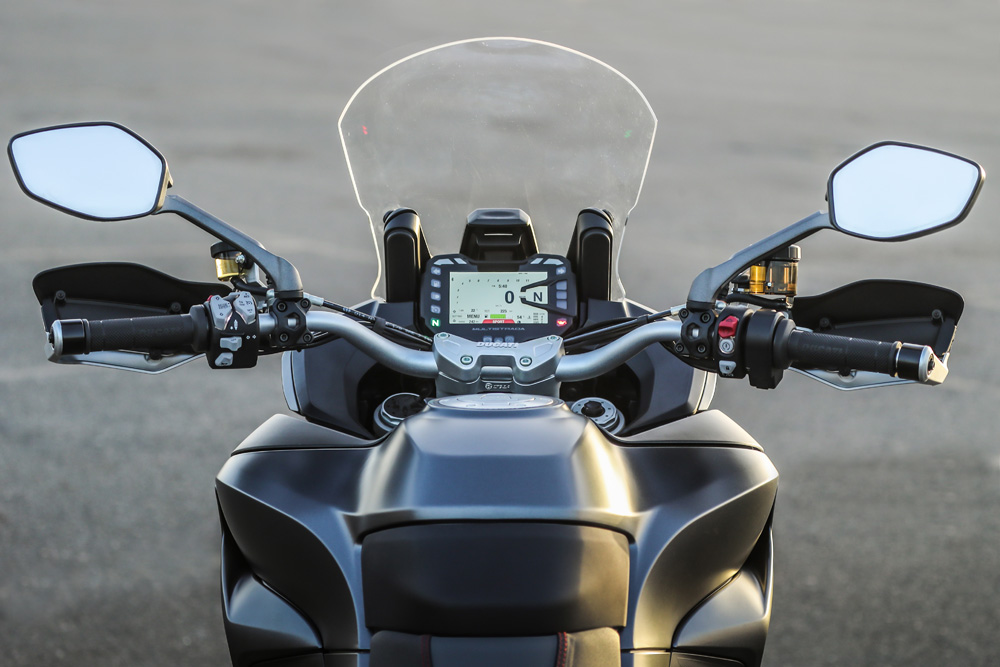 With an increase from 1198 to 1262 cm3, the Multistrada switched from the former Superbike engine to the latest X-Diavel mill. Figures are now an impressive 158 hp at 9500 rpm and 129 Nm at 7500 rpm. However, for real life use, torque is probably more important than power. The Multistrada 1260 has torque. Plenty of torque. 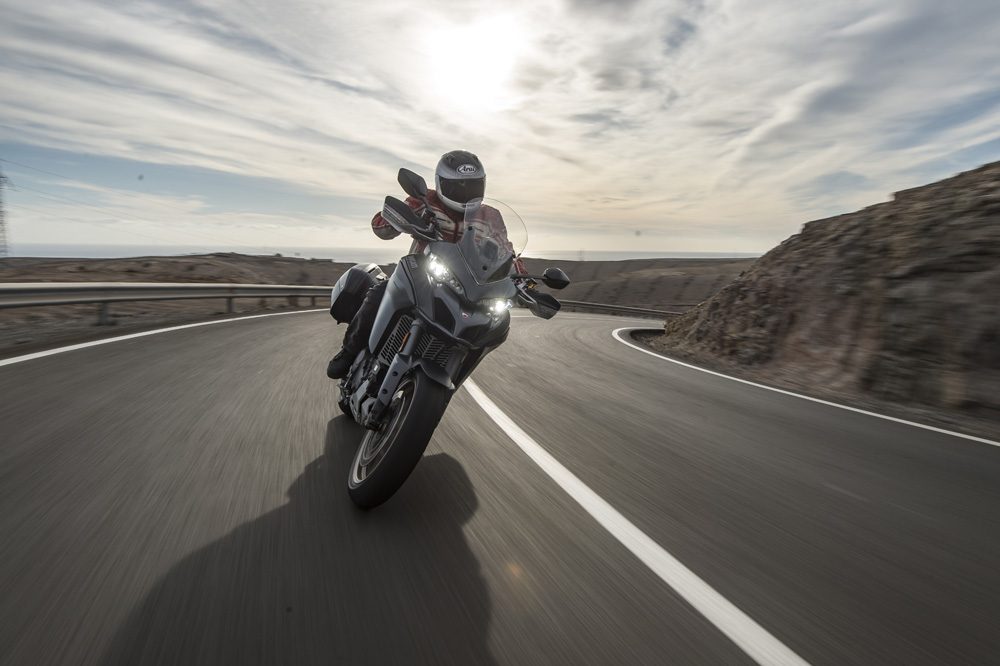 Do you want to talk about power now? In proper modern Ducati tradition, the big V-twin is strong and fast revving. Second gear gets you to 150 km/h, 3rd is good for 190 km/h, 4th goes above 210 km/h. There are still two gears to go and yet they still call it a touring bike? Pure madness! 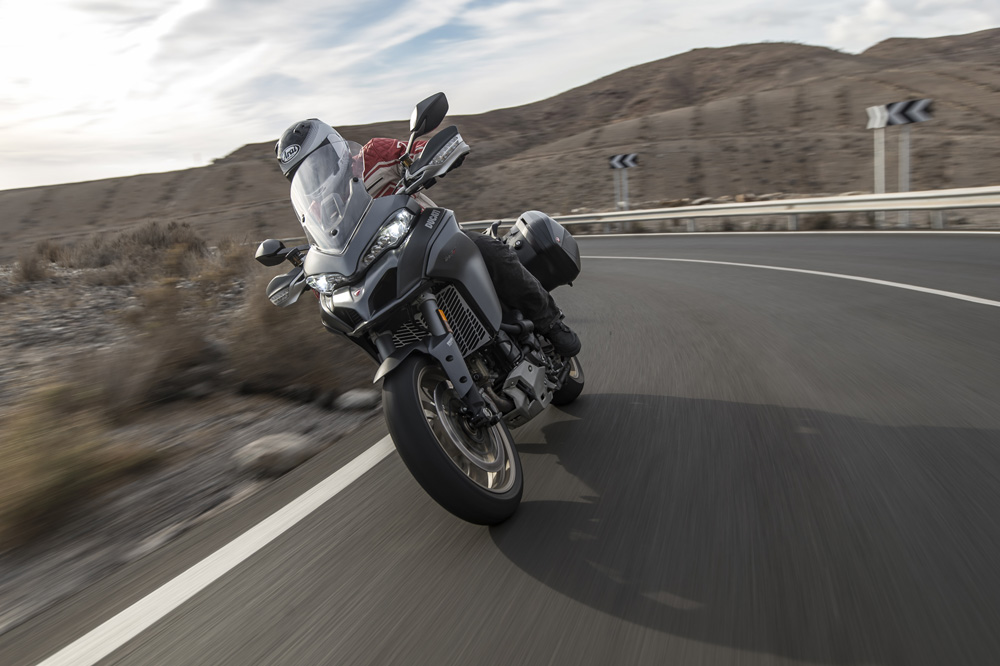 Another great asset is the up & down quick shifter, which is now fitted as standard on the Multistrada 1260. It’s not only fun to use; it’s also extremely efficient, and during our test on the Canary Islands mountain roads, where we spent most of our time in 2nd and 3rd gear, I quickly dispensed with using the clutch, even when down-changing to 1st gear in some of the tight hairpins. 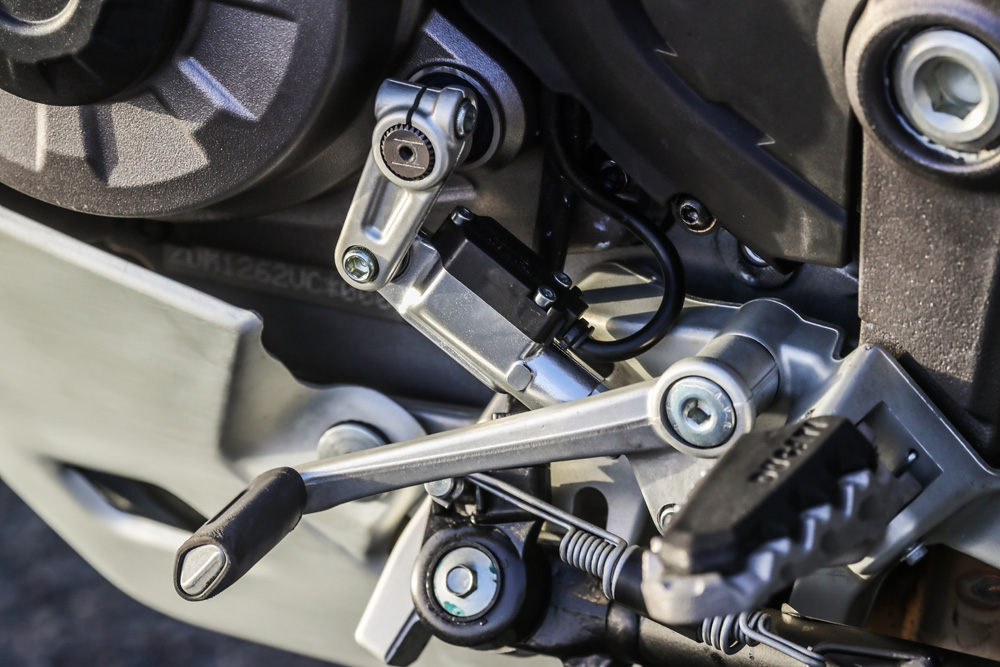 A very wide range of capabilities

The different set-up has a strong impact on the bike’s behaviour. From the throttle response to the suspension smoothness, the Multistrada can be a real two in one bike. At 235 kilos (wet weight) the Multistrada remains quite light for a 1200 cm3 dual-sport bike. The agility is spot on, and the braking, with 330mm discs bitten by M-50 radial four callipers by Brembo, is beyond reproach, with precise lever feel and a lot of usable power. 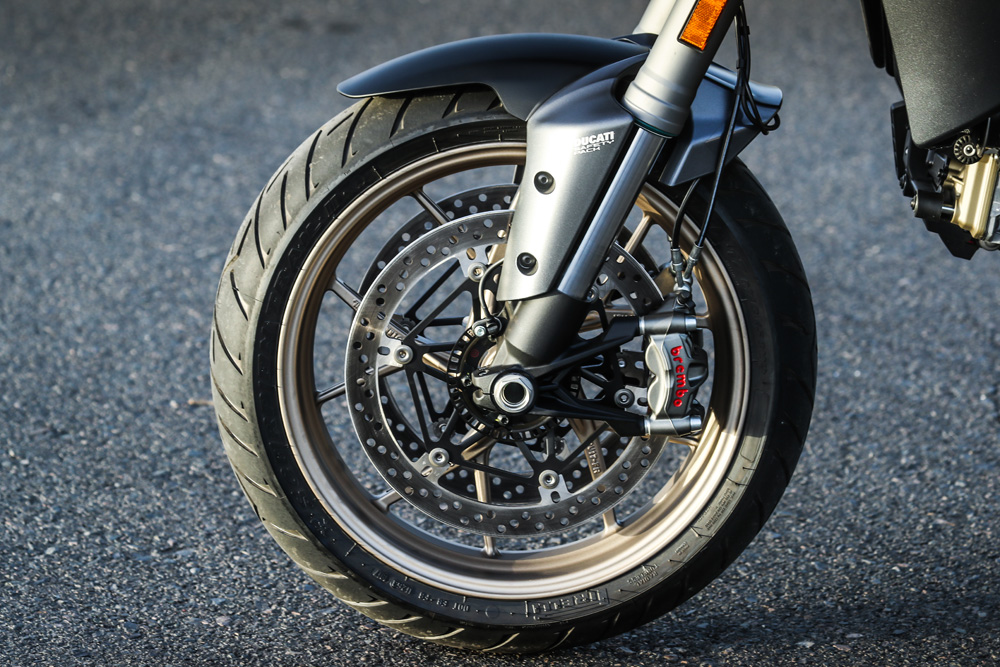 Hardcore riders will be able to use the TFT dials to access and fine tune chassis set up. For an aggressive riding style the suspension works best set at the “hardest” setting, and the pre-load needs to be adjusted too. Even in that configuration, the front end lacks a slight bit of feedback. The rear shock, managed by the electronic suspension SkyHook Evo, can be a bit too soft in rebound, giving the bike a bit of movement mid corner.

You’ve just noticed that, in the above paragraph, I use superbike vocabulary to analyse a touring bike. A fast, high-powered and sophisticated machine indeed; but still a touring bike with amazing versatility. 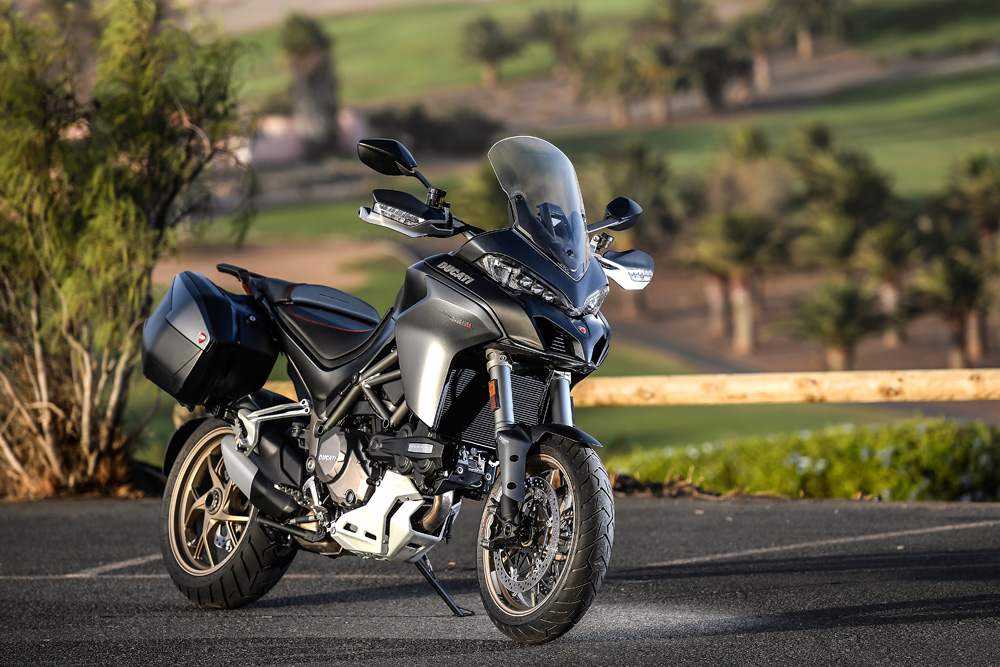 The amount of power, the real ease with which it turns, the neutral riding position, the great brakes and grip from the Pirelli Scorpion II tires: so, as the pace gets faster and faster you end up expecting the same feedback as a proper sport bike. Hardcore dual sport riders will find some relief in the Pikes Peak version of the Multistrada 1260.

During our ride, we recorded 6.6l/100 km on the compute – enough for a 300 km plus fuel range. This was with some seriously spirited riding. The Multistrada 1260 does not pretend to be a cross-country traveller, the Multistrada Enduro and Enduro Pro remain in the range, although they stick to the 1200 engine.

The Multistrada 1260 is a prime choice for the biker looking for comfort, safety, technology, versatility and cornering talent. A lot of assets, indeed, especially while being powered by such a breath-taking engine. 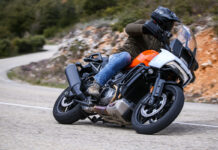 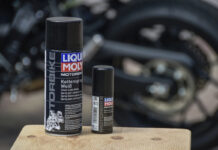 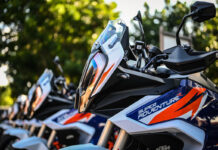