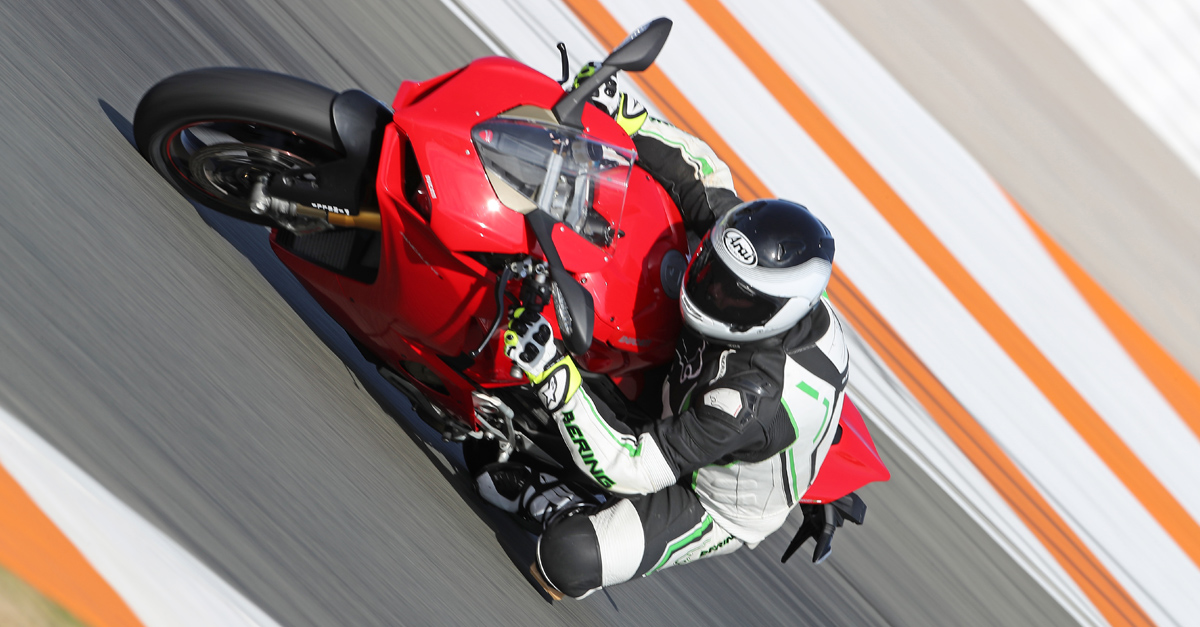 The pit straight at Valencia MotoGP racetrack is only 876 meters, that doesn’t prevent the new Ducati Panigale V4 S reaching a speed of over 280 km/h. The pit straight is just swallowed in a few seconds, you enter the straight after corner 14, (called Adrian Campos) in second gear, at over 185 km/h, third gear is good for 235 km/h, fourth for 260 km/h and the acceleration seems endless – how is that possible? 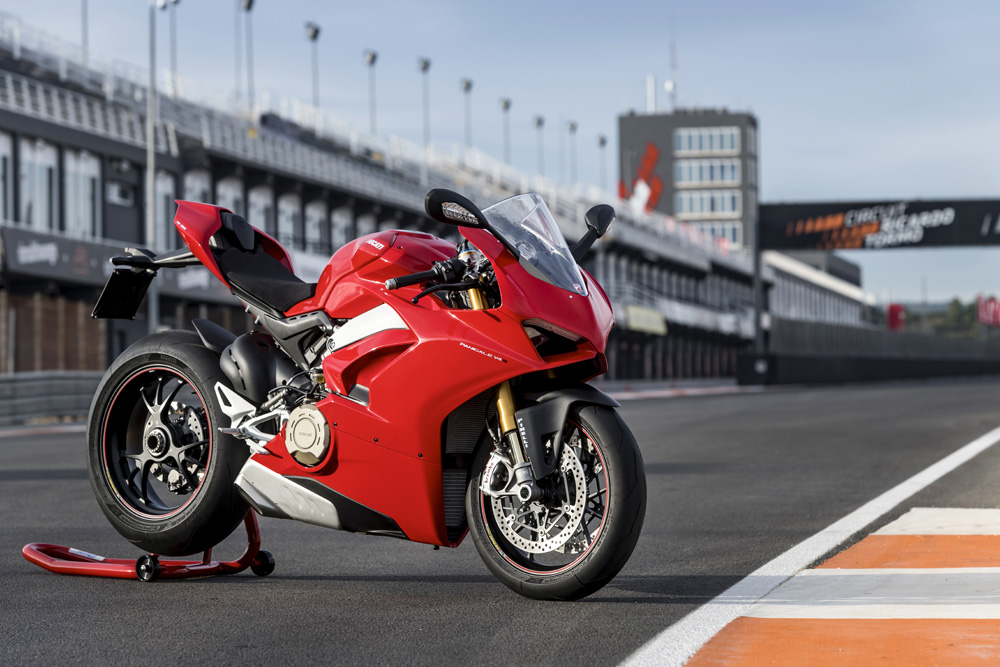 With a brand new 90° V4 engine thats inspired by MotoGP technology, Ducati aims at nothing less than being the class leader in the Superbike category. The Panigale V4 offers the best power to weight ratio (1,10 hp per kilo), with a capacity of 1103 cm3, the V4 delivers 214 hp at 13000 rpm and 124 Nm of torque at 10000 rpm (with a very flat curve from 9 to 12000 rpm), while revving up to 14500 rpm. The Ducati Quick Shifter, works both up and down and helps to sustain strong acceleration. Corner one at the Valencia MotoGP racetrack is full of rubber marks, one of which was ‘signed’ by Marc Marquez himself when he lost the front chasing his fourth world title at over 150 km/h. This environment was perfect for testing the Panigale V4 S!

Forget about the two cruisers Apollo V4 prototypes from the 1960’s. Forget also about the exclusive Desmosedici RR, of which 1500 units were produced in the 2007. We are now talking about a superbike for the masses. Well, the wealthy masses that is. With the Panigale V4, Ducati literally brings MotoGP technology to the streets and to the racetracks. And this is not just a marketing ploy, like that of the Dakar winner Peugeot 3008 pretending to be the same as your brother-in-law’s Diesel-powered 3008!

MotoGP technology means: equal 81 mm bore and stroke with the engine tilted backwards by 42°, a reverse rotating crankshaft, twin pulse firing order, and nearly as many electronics as a MotoGP bike. Rider safety has been taken very seriously by the Ducati team. There are three riding modes; Race, Sport, and Street. In the latter mode, 214 hp is delivered with a ride-by-wire softened response. There is also, an ABS EVO braking system, which allows some slide under braking, in case of strong deceleration with a slide angle between 0 to 35°. Launch control (DPL), ensures lightning-fast starts, letting the rider focus only on releasing the clutch. Once set, the rider simply engages the first gear and opens the throttle. Wheelie control (DWC EVO), this system, using Bosch 6D IMU information, ensures wheelie control to obtain top acceleration performance in a smooth, safe manner. The DWC EVO detects the occurrence and extent of wheelies to control them with a higher level of precision, ensuring a more accurate response to rider input. 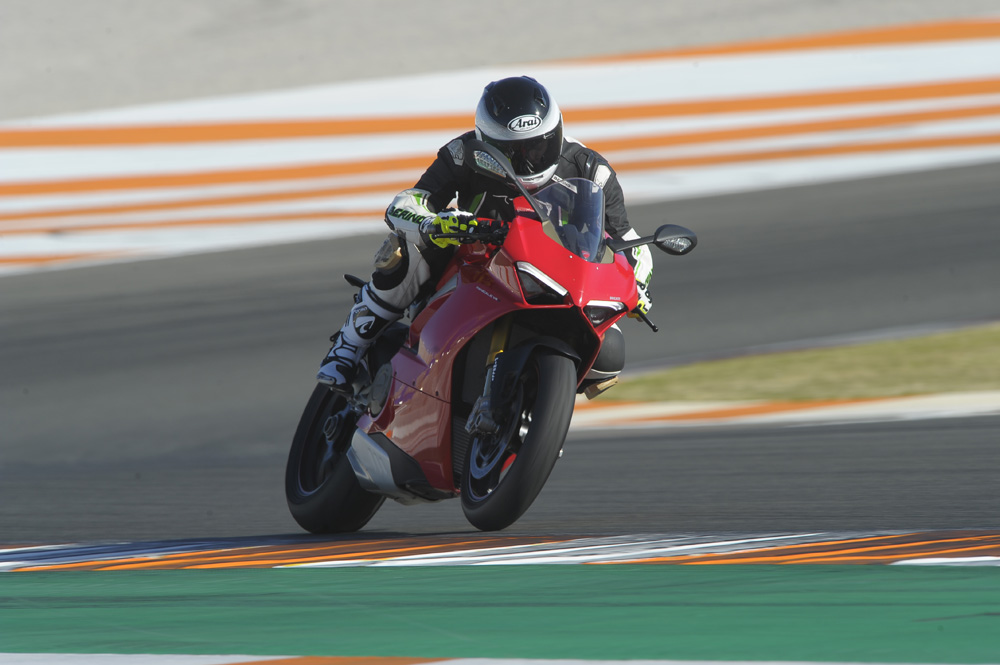 Traction control (DTC EVO), which includes a power-slide model. And last but not least, a engine-braking management system (EBC EVO), which has been developed to help riders optimise vehicle stability under extreme turn-in conditions. The only thing missing is a pit-lane speed limiter! All the above are very easy to manage and select via the left hand push buttons.

On the looks side, the Panigale V4 is very close to its 1299 Panigale V2 sibling. The overall silhouette is the same, although there is a bit of difference in the exhaust, headlights and front nose. Riding alongside each other, you might struggle to spot the difference, although the V4 is more distinctive from the rear, with two kinds of wind tunnels under the rear lights. Awesome! Any similarity is gone once on board. The 5’’ TFT instrument panel is brand new and proves itself to be very easy to read. The riding position is similar to the V2, with a 830 mm seat height and a narrow fuel tank (part of which goes under the seat), thanks to a V4 engine which is only 2.2 kilos heavier than the V2 (at 64,9 kg), whilst being 28 mm shorter and 38 mm lower than the V2. 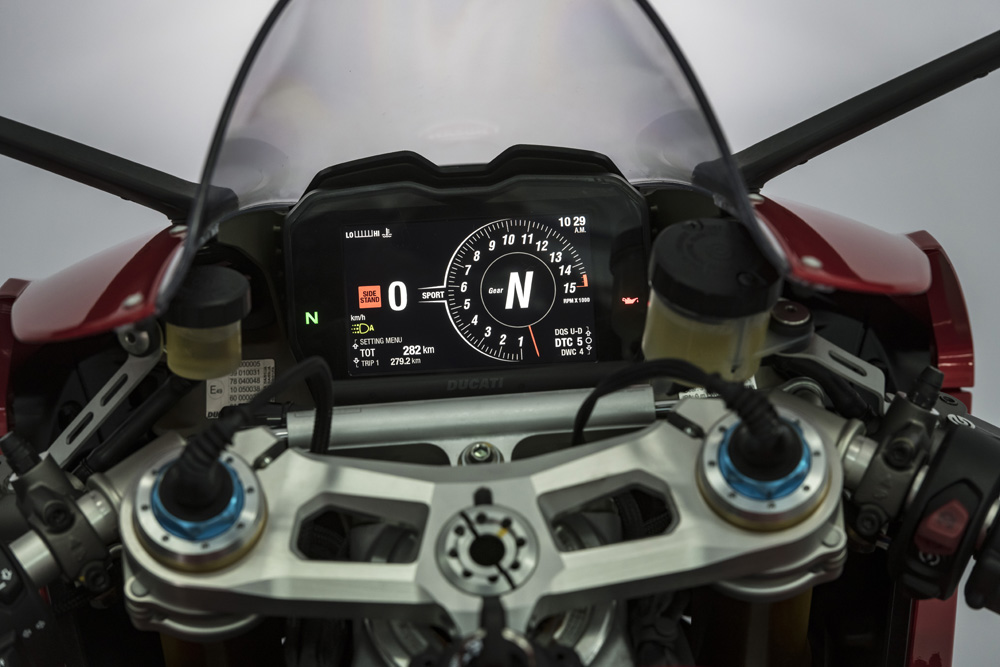 The Ducati V4 has a sound of its own; more discrete than an Aprilia RSV4, less raucous than a CrossPlane Yamaha R1, it’s proper! A symphony made in Bologna.

The first few laps show instantly one of the bike’s main assets: an easiness and agility that you never found on the Ducati big V2 Superbikes. With the Panigale V4, I was cornering knee down just after a few corners, the twin cylinder took a few sessions for me to warm up before I could keep a proper race pace. The V4 is definitely a much easier bike to ride. 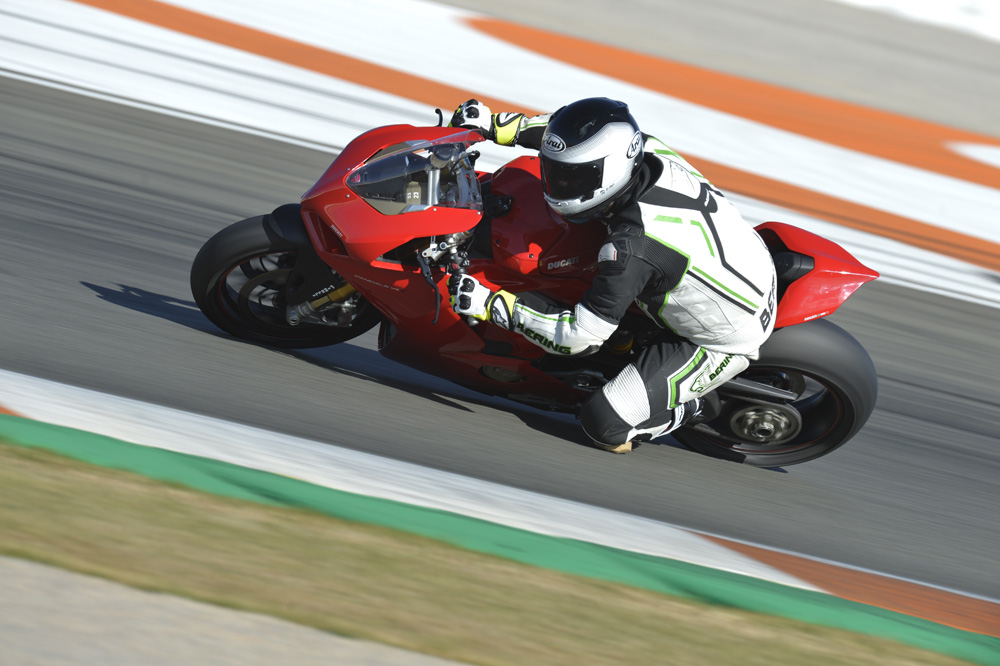 I started in “Sport” mode, as I wanted to tame the beast progressively. As the pace increased, there was a bit of suspension movement but not too much. There was nothing wrong with the steering damper and the high-speed stability: they are both spot on. The quality of the electronics make you almost forget that they are there. They certainly make this powerful machine easier to ride and deliver its hefty 214 hp to the tar.

“Race” mode makes the Öhlins electronic suspension (with state of the art NIX-30 front fork and a TTX 36 rear shock, plus a steering damper) work amazingly. I only noticed a slight movement whilst I was exiting hard a low speed corner, as the rear tyre searches for traction. We also had the chance to ride the Panigale S with the Ducati Performance pack which had different engine mapping. An Akrapovic exhaust does not only deliver a divine note, it helps the V4 to generate 226 hp and 135 Nm to an ecstatic rider! Coming with a pair of Pirelli Diablo Supercorsa SC1 slick tyres, it gave us the opportunity to taste the full potential of the Panigale V4, and it’s just brilliant! The slick tyres worked better than the brand new Superdiablo Corsa “road” tyres in that under strong acceleration the bike remained solid, and the rear shock worked perfectly. The agility remains fantastic, as the weight dropped from 195 to 188 kilos – track-day fanatics take note!

Superbike lovers can only be fascinated by this piece of engineering. The aluminium front sub-frame weighs only 4 kilograms, and links the engine (which works as a structural element to the chassis), to the front end. The rear sub-frame weighs only 1,9 kilograms, the single swing-arm weighs 5,1 kilograms, the front headlight is 500 grams lighter than that on the V2 counterpart at 700 grams, the standard exhaust weighs at 9,7 kilograms and the fuel tank (which goes, as the race bike, slightly under the seat for a better weight distribution), weighs 3,1 kilograms. The Panigale V4 is as obsessed as a supermodel about it’s weight! 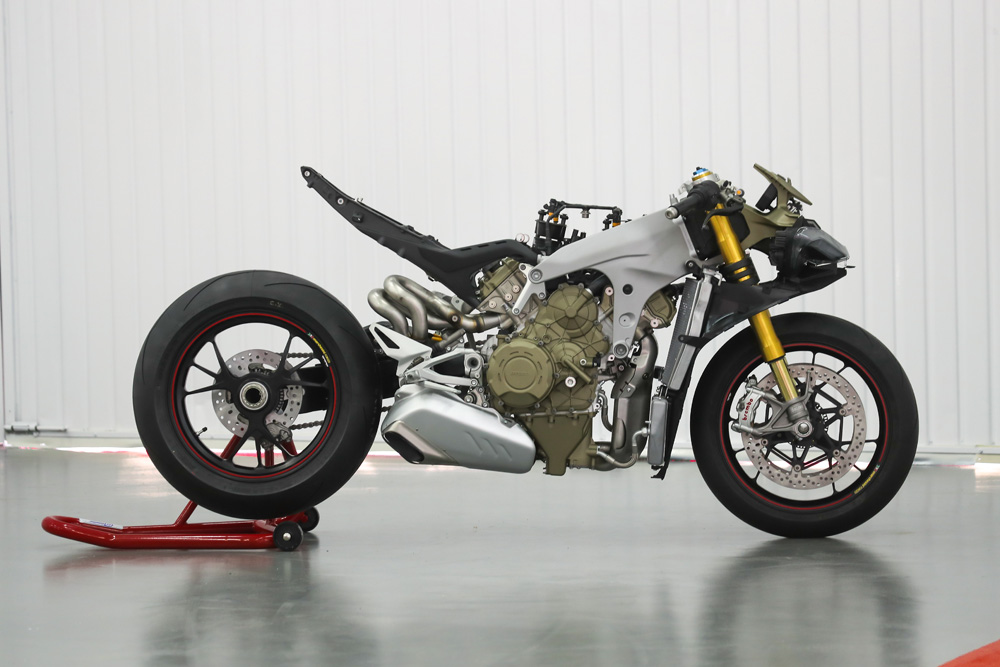 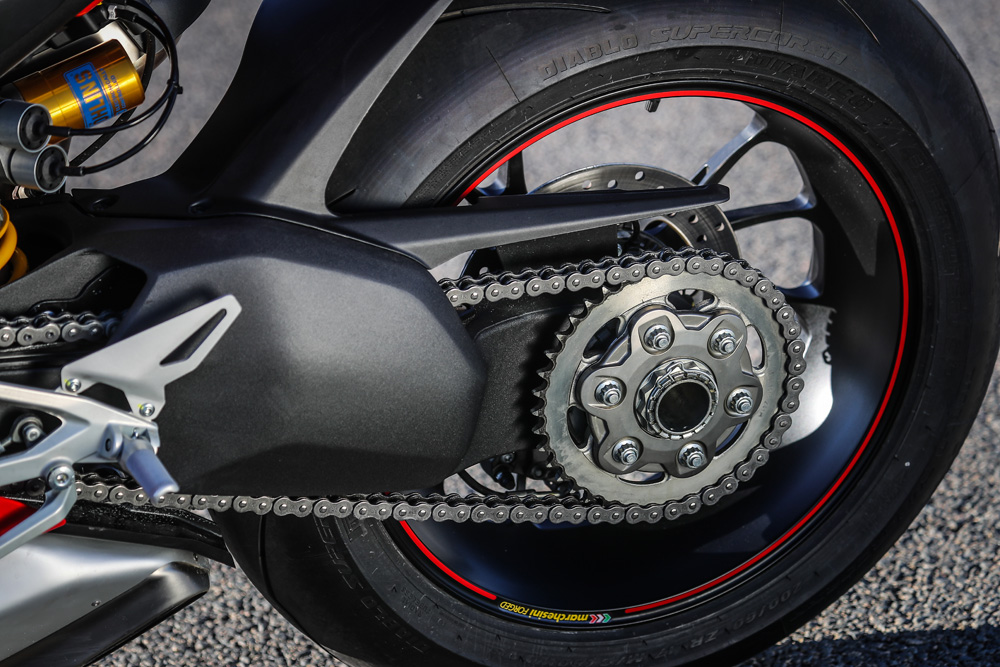 While pushing harder and harder on the track, you can see the traction control lights flicker (in orange, on the TFT panel up at the left side), you can barely feel it nor hear it, as it’s extremely subtle and does not give you the feeling of interrupting acceleration at all. Another one of the V4’s great assets comes in the braking department. Brembo has given its latest generation device, called Stylema, and it’s 700 grams lighter compared to the M50 previous generation (while being even more rigid). 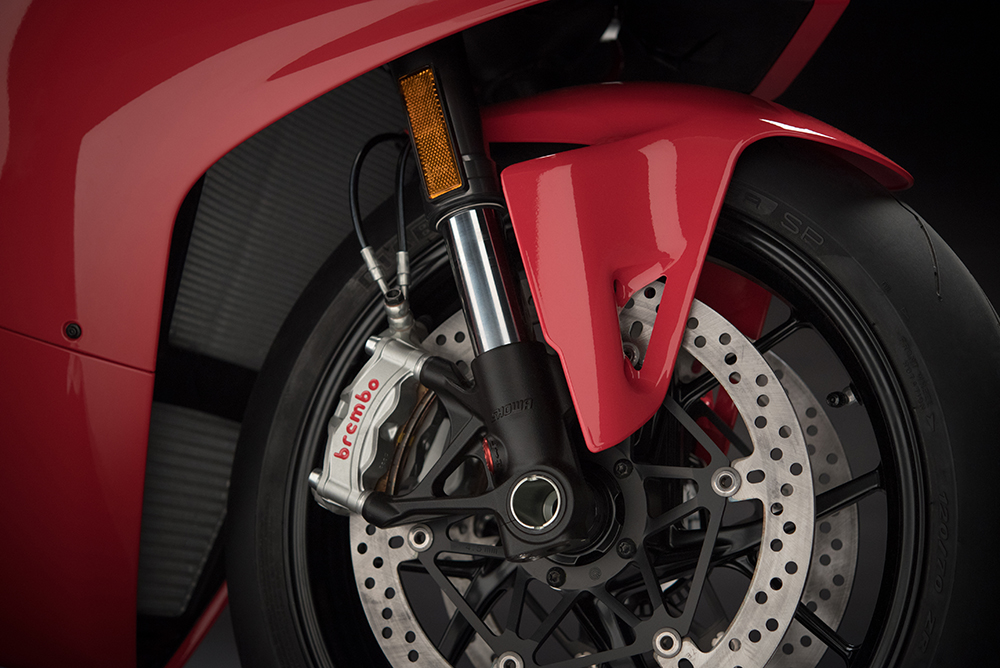 The fact is the Panigale V4 is up there with the best of them as far as braking is concerned. Power, feel, everything is great and that’s quite important when you reach 280 km/h on the straight, or when the tight second-geared corner 8 appears while you exit corner 7 at over 230 km/h! All the while the electronic Öhlins suspension is doing a great job, with the whole setup being controlled by the electronics to maintain stability. 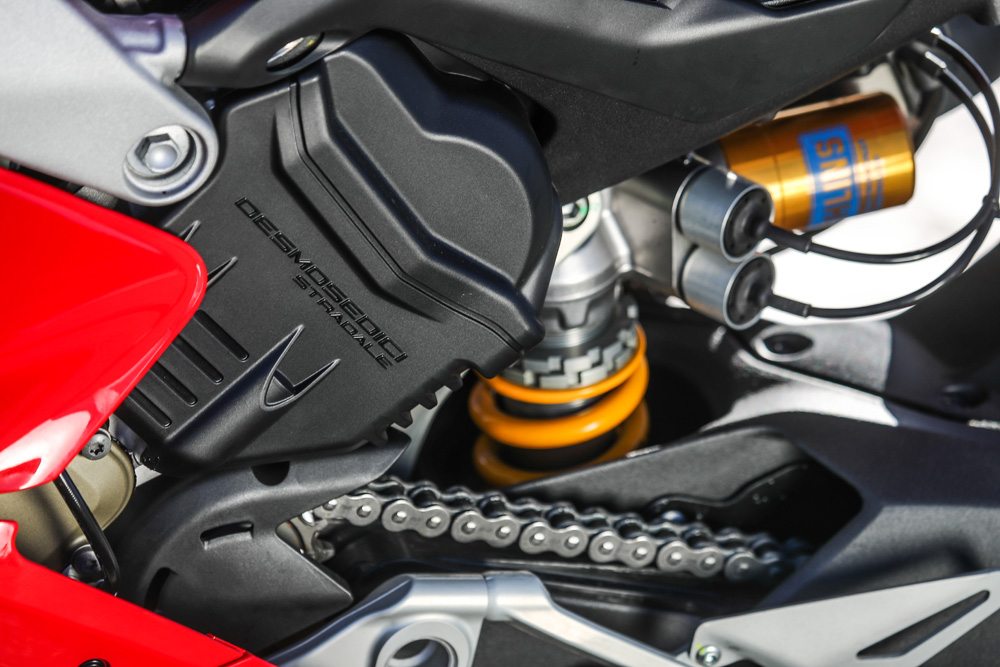 The Ducati Panigale V4 is not only more powerful than the V2. It’s also easier to ride, much more agile and claimed “MotoGP” technology is not just marketing hype. It’s real! As a matter of fact, there is definitely a new leader in the superbike class. While the peak power seems to be a tad less violent than a BMW S1000RR, the Panigale V4 has got more power throughout a more consistent range. It has much more personality than the average traditional Japanese in-line 4, it’s less peaky than a Yamaha R1, more powerful than a Aprilia RSV4. At Valencia, Ducati test rider Alessandro Valia was only 5 seconds away off the MotoGP lap record on the Panigale V4 – impressive! OK, so it is likely to be pricey? If you consider it as a Ferrari 488 GTB on two wheels, then maybe not really…