In 2004, a film-maker called Morgan Spurlock released a movie called: Supersize Me!
The target, to eat as many burgers as possible.

In 2018, a motorcycle manufacturer called Kawasaki released a touring bike: Supercharge Me! The target, to eat as many kilometres as possible.

I prefer the second one, by far! 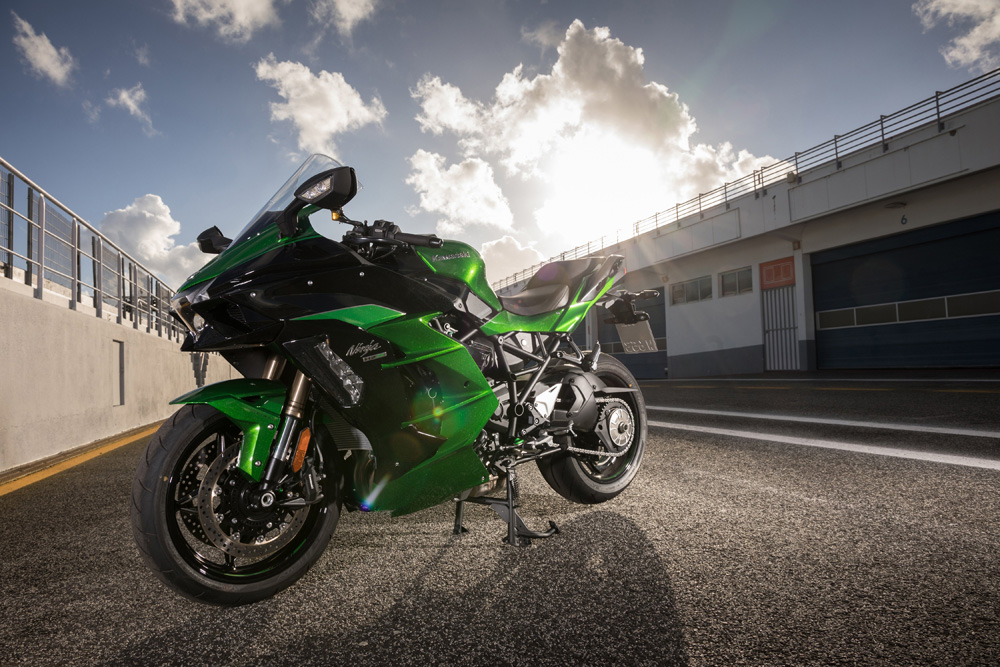 “We wanted this bike to be the fastest sport-tourer of the Autobahn”, said project leader Hiroyuki Watanabe, who also created the previous H2 & H2R, as well as the 2003 & 2010 Z1000 and the 2007 ZX-6R, showing us a picture of the bike flying down a German highway with a “Garmish-Partenkirchen” direction board. With Garmish being a bit of the BMW land of joy, one can but wonder if it’s pure coincidence? 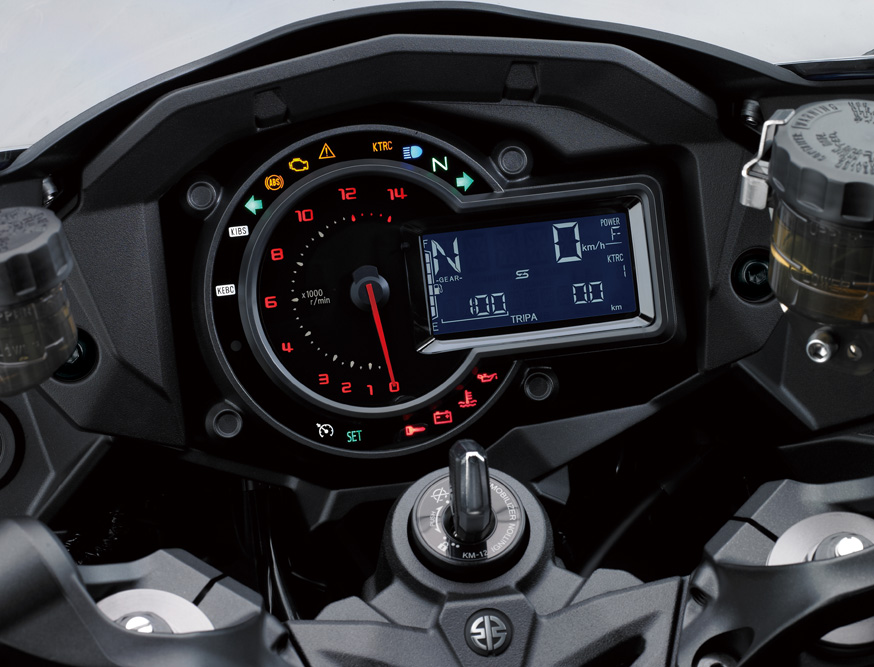 The bike promises to be fast, for sure, with a 210 hp (Ram Air figures) claimed, and a sleek aero design. However, it has nothing much in common with the standard H2, apart from a 998 cc engine, the same amount of power, and a supercharger. 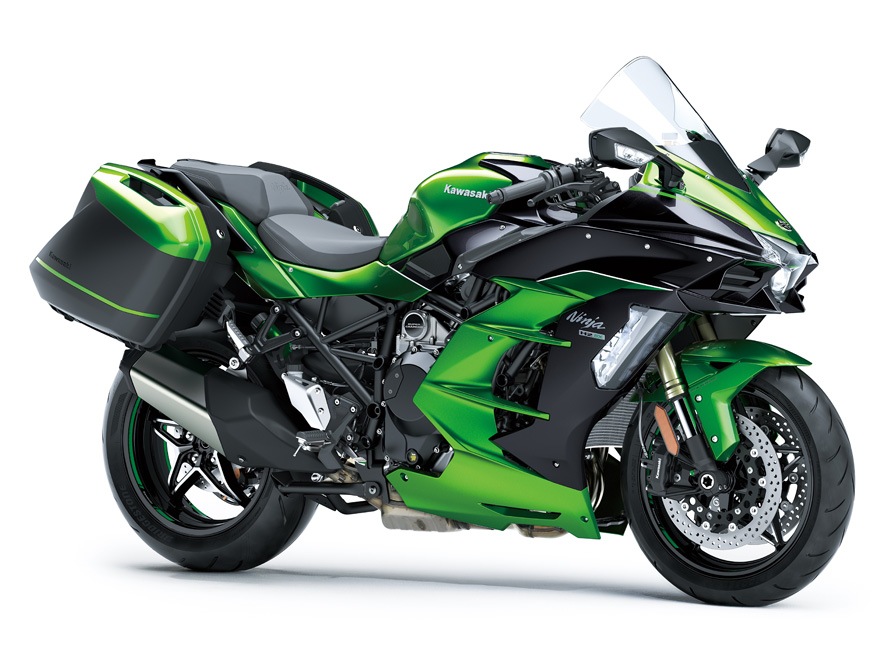 The H2 provides a raw and thrilling riding experience as well, and demonstrates once again, Kawasaki’s leadership in the production of high-performance and emotional bikes, a trend started long ago with the 900 Z1 and the ZX 750 Turbo.

The H2 SX certainly launches a new era: it might be the first of a new generation of motorcycles. Let me explain myself. To reduce CO2 emissions, car manufacturers have been through a downsizing process. Small engines with turbos help to reduce emissions without compromising on power.  In the motorcycle industry, Suzuki and Honda are also interested in this process and have secured some patents. However, Kawasaki is here with the first to market a force fed bike.

If you have never tested a H2, pop in to your nearest Kawasaki dealer. It’s an absolutely frantic experience. The bike is a bit on the hard side for daily use, with a violent power delivery, an engine which releases a lot of heat and neutral is hard to find while standing at a robot.

So, to achieve greater versatility the H2 SX has a nearly new engine. The external cases are the same, but cylinders, cylinder head, crankshaft, camshafts, intake funnels, smaller throttle bodies (diameter 40 mm instead of 50 mm), exhaust (smaller: 7 litres and 2  kilos lighter too), all those components are new. The supercharger impeller is also different. 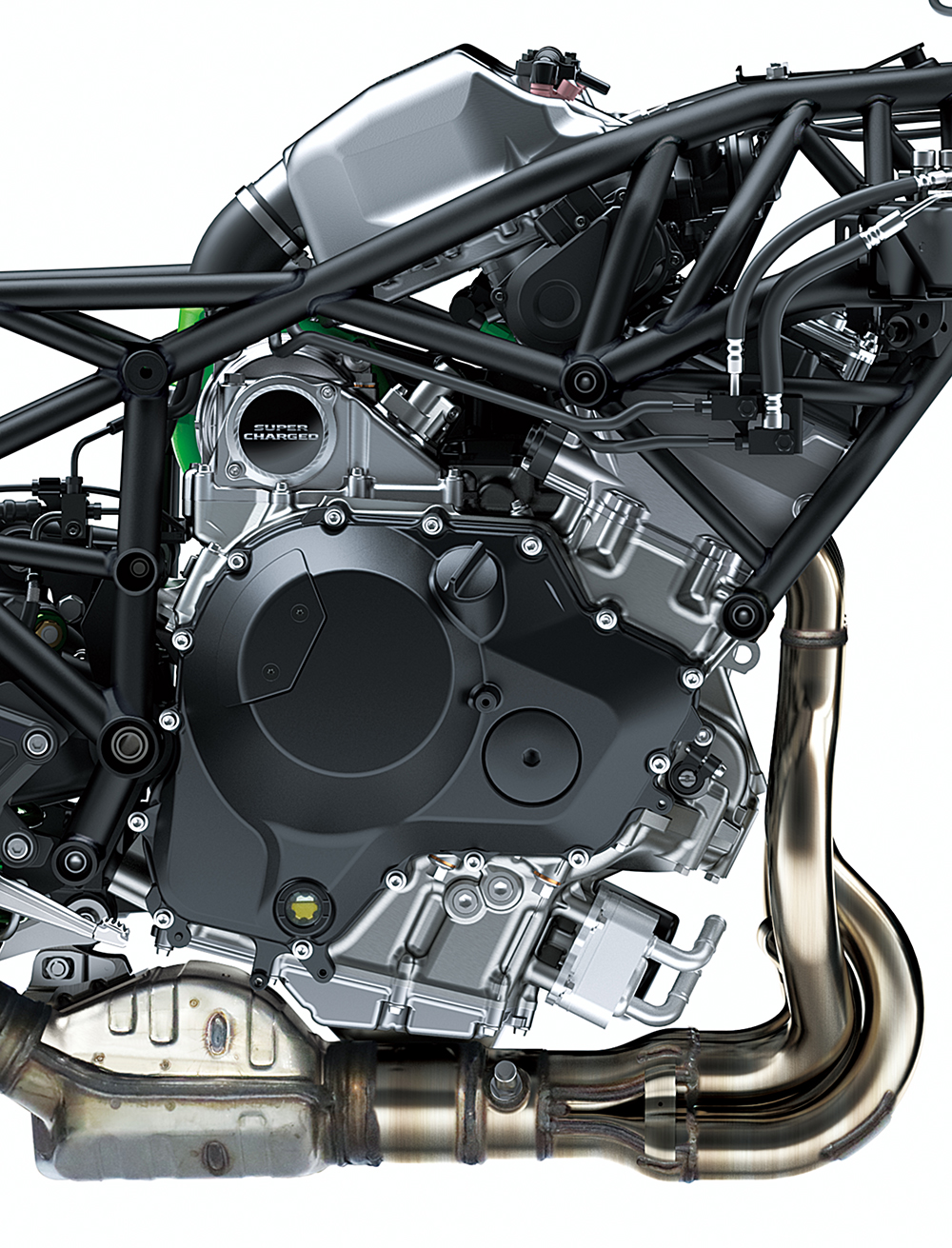 The compression ratio goes up from 8,5 to 11,2:1 and Kawasaki claim 25% better fuel efficiency. With a 19 litres fuel tank, Kawasaki claims a more than 300 km fuel range. Our test reveals that you’ll have to stick to the speed limit to reach that target and you’ll have to refuel much more often if you are addicted to the supercharged power. 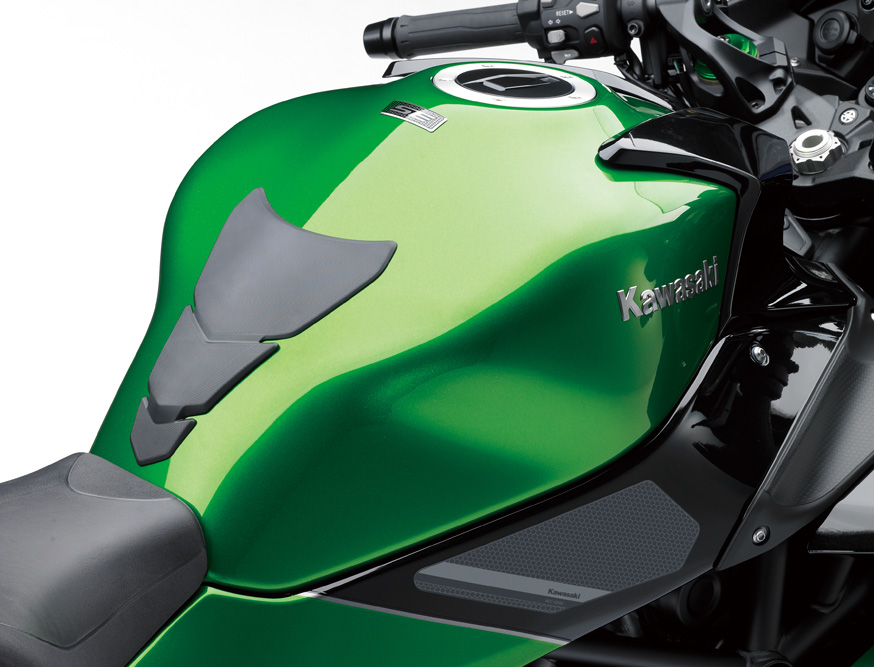 There are a lot of modifications in the chassis department too. The subframe is different, to handle a pillion and luggage (the optional 28 litres panniers are made by Givi, and Kawasaki said they have been extensively tested to the maximum speed on German highways without any issue). The payload is now 195 kilograms instead of 105 kilograms on the single-seater H2. Although the main trellis frame looks the same, the tube has grown from a 22,2 mm section to a stronger 28,6 mm. Hence, the H2 SX is 18 kilos heavier than the H2 (but remains 9 kilos lighter than a ZZR 1400). 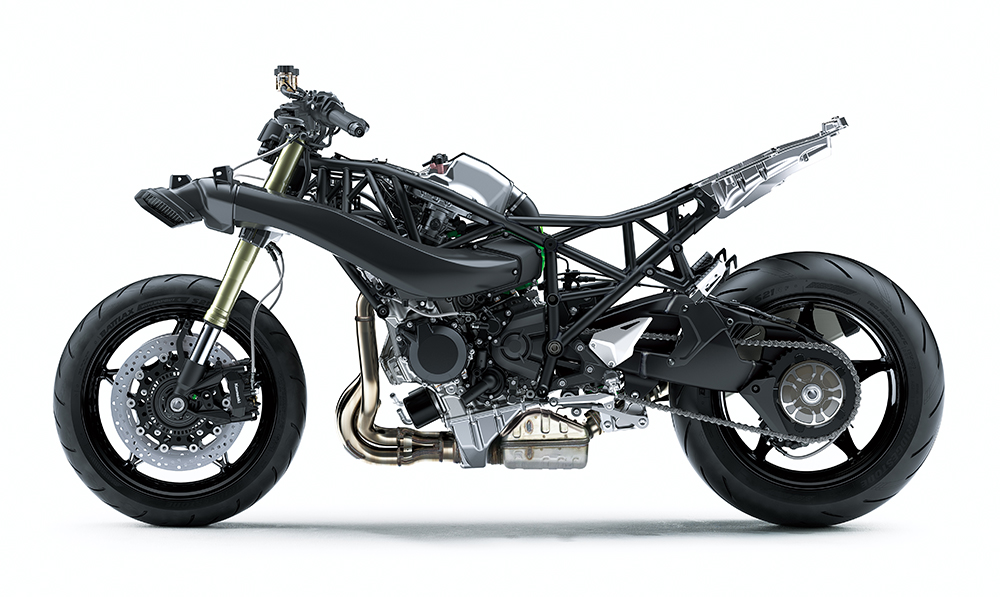 Nowadays, a modern motorcycle is nothing without a comprehensive electronic package. The H2 SX has it all. A Bosch IMU unit manages traction control, wheelie control and launch control. There are three power modes delivering 50, 75 and 100 % of the engine capabilities. Cornering ABS and engine brake control are there, as well as the second cruise control in Kawasaki history, after the one fitted on the VN 1700 Voyager. The cruise control can be activated to maintain speeds of up to 200 km/h. A bit slow to cruise on the 250 km/h section of the N14 near Pofadder, perhaps? 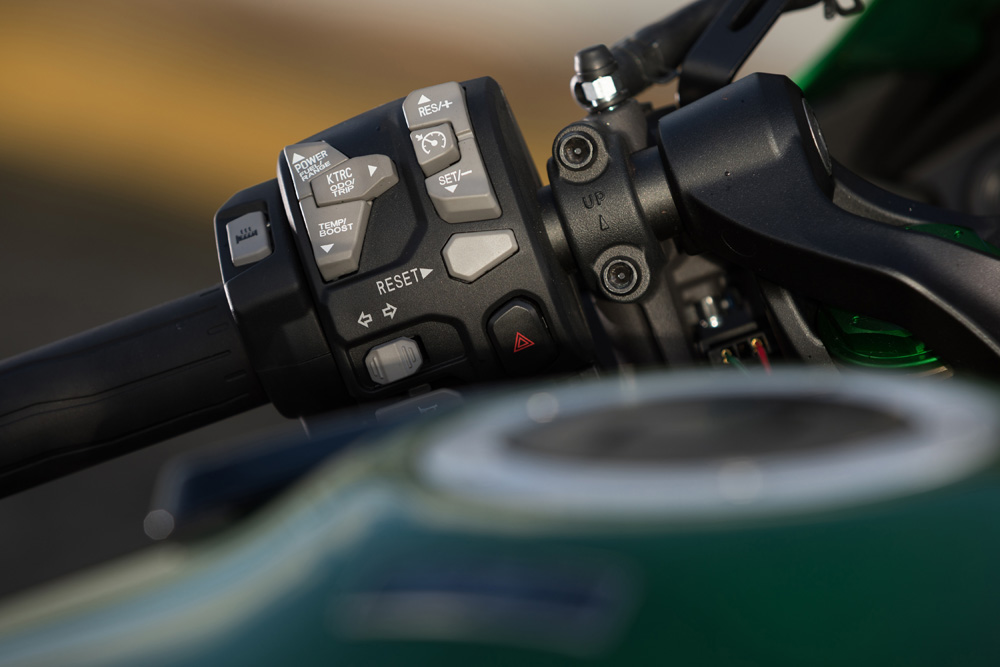 On the SE version (the green one, as the standard H2 SX only comes in black) there is also a new color TFT instrument panel with plenty of information and two display modes (touring and sport), cruise control as well as cornering light and a quick shifter up & down (not the smoothest on the market, but it does the job, though).

We had the chance to ride the H2 SX and the fully comprehensive SE version, during a one and a half day period, on sunny winter Portuguese roads. Braking, handling and acceleration were covered at the iconic Estoril racetrack in a controlled environment.

As our previous technical section was insinuating, one only has to ride a couple of hundred  metres to discover that the H2 SX is significantly different when compare with the H2. The beast is (slightly) tamed, but the power is still there. 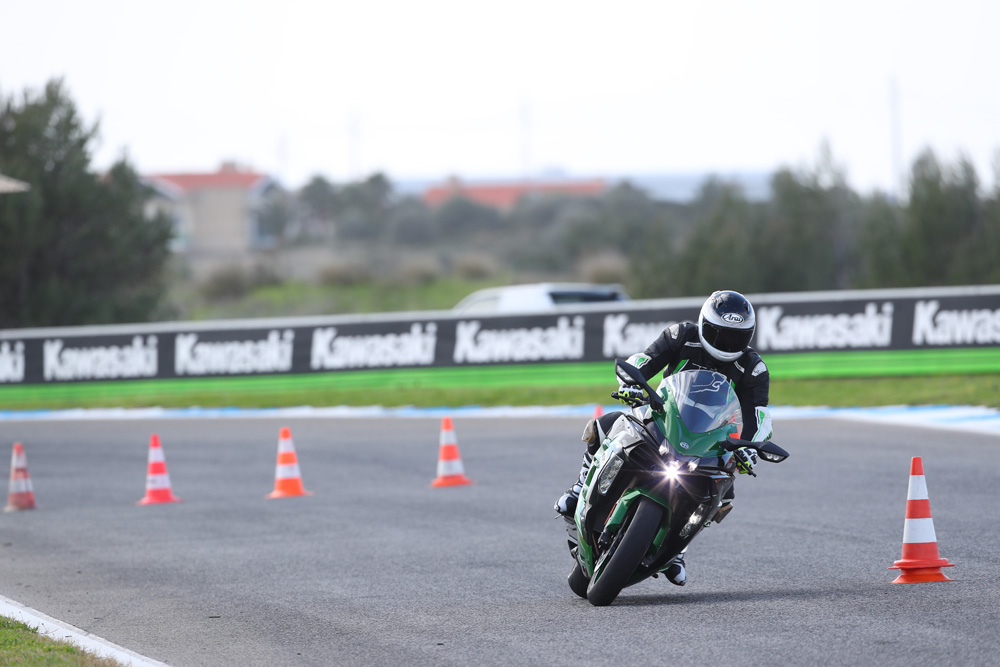 While cruising gently on the city’s boulevards, the H2 SX is wonderfully smooth. Smooth riding position (less leaned forward than on the ZZR 1400), smooth controls, smooth gearbox (with a neutral now easy to find), and a smooth engine, able to do 50 km/h in top gear at below 2000 rpm: a great commuter, by the way. So, the beast is tamed, but the beast is still there: engage the launch control to discover it. Will you dare to keep the throttle wide open to realize the perfect start and trust the electronics, keeping the revs around 6500 rpm? 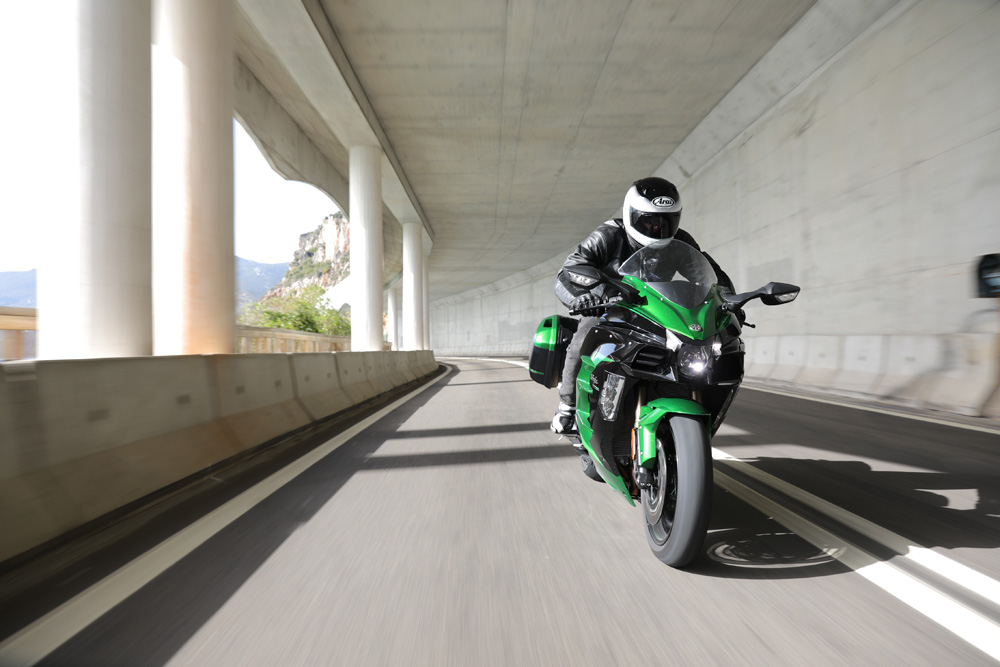 We had the chance to test the system on the Estoril 985 m long pit straight. Now it’s up to you to release the clutch and let the supercharged power kick your ass. And it does. The traction control combined with the wheelie control struggle to keep the front wheel on the ground and the acceleration is just ballistic. The lower gear ratio’s are not as long as standard superbikes and that makes the acceleration just even more impressive. There is not much time to read the digital speedo. I can see 254 km/h near the rev limiter in fifth before gearing up to sixth, and I apply the radial brakes at over 280 km/h at the end of the main straight. I can feel the 260 kilos weight, but the brakes remain impressive and it is unlikely that you will take them to the limit on the open road. 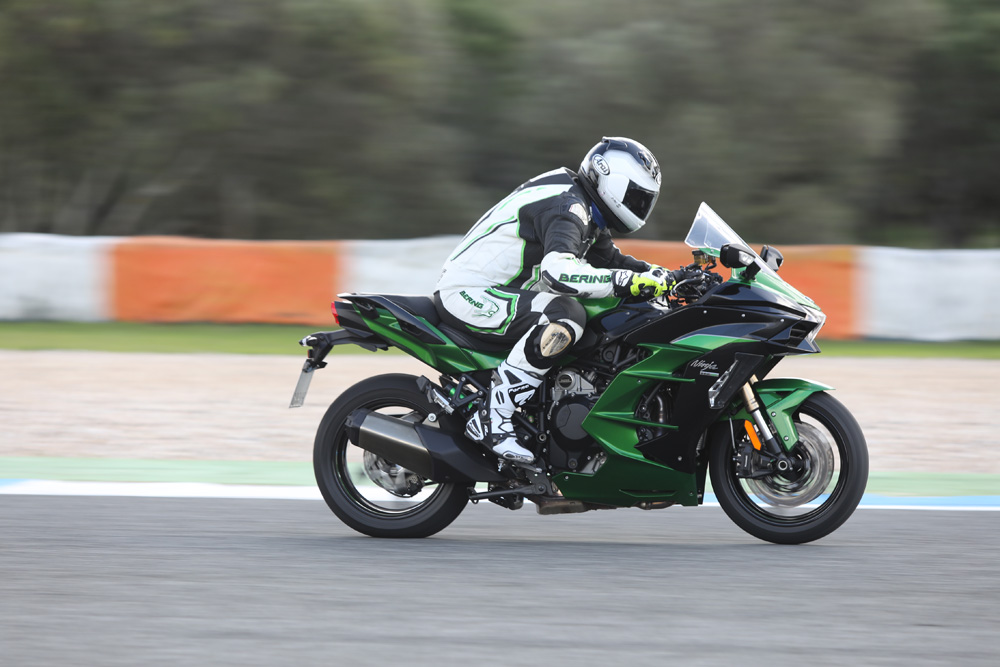 The open road is also where the H2 SX SE will demonstrate its unique personality. The suspension setting is a bit on the touring side and the overall level of comfort is just impressive, although the head and hands wind protection could have been a tad better.

The H2 SX SE trumps the BMW K1300S and the Honda VFR 1200, and makes the Kawasaki ZZR 1400 and the Suzuki Hayabusa feel so ordinary, although in roll-on acceleration at legal speed in top gear, it won’t do any better. 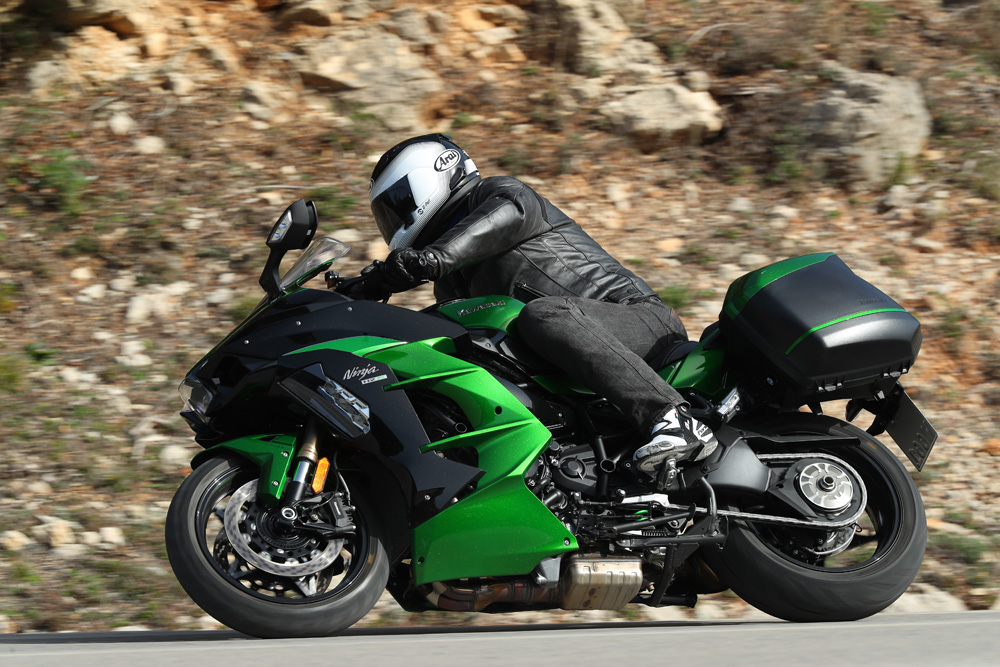 The H2 SX SE hits a new mark for a simple reason: besides its unprecedented level of safety and electronics, it delivers new sensations. With the supercharger, enjoy a “1.4 liter level of torque” with a “superbike free-revving engine” in the intermediate gears. Touring has never been so much fun.