The original 1988 Honda Africa Twin was a real game changer, as it put an end to the single-cylinder trail bike era and it took three years for Yamaha to replicate with the XTZ 750 Super Ténéré. 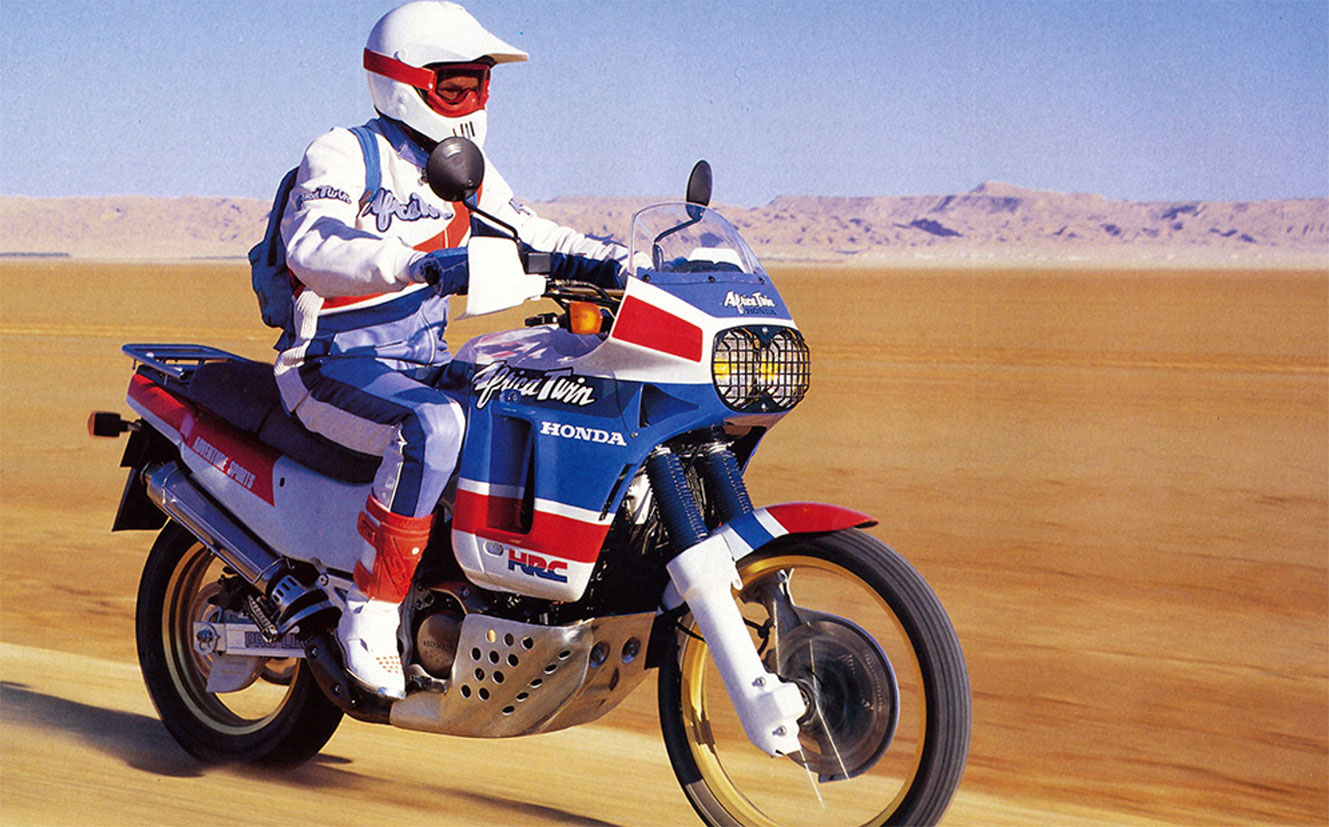 The 2016 Honda Africa Twin was too another game changer. As big DS bikes were heading to a 150 hp plus path, Honda preferred to stick to a “real life, practical, human-sized” machine. That was a truly smart move, as the Africa Twin went straight to the hearts of all the bikers begging for the return of a “proper-dual-sport” bike, which was versatile, fun, and not too intimidating. Success was there, as the Africa Twin has sold over 51000 units worldwide in less than two years, with 45% of the owners choosing the DCT gearbox.

Celebrating 30 years of the African Twin, Honda is coming out with a new updated version called “Africa Twin Adventure Sports”, this bike is impossible to miss as it features the historical XRV 650 Africa Twin colour scheme. 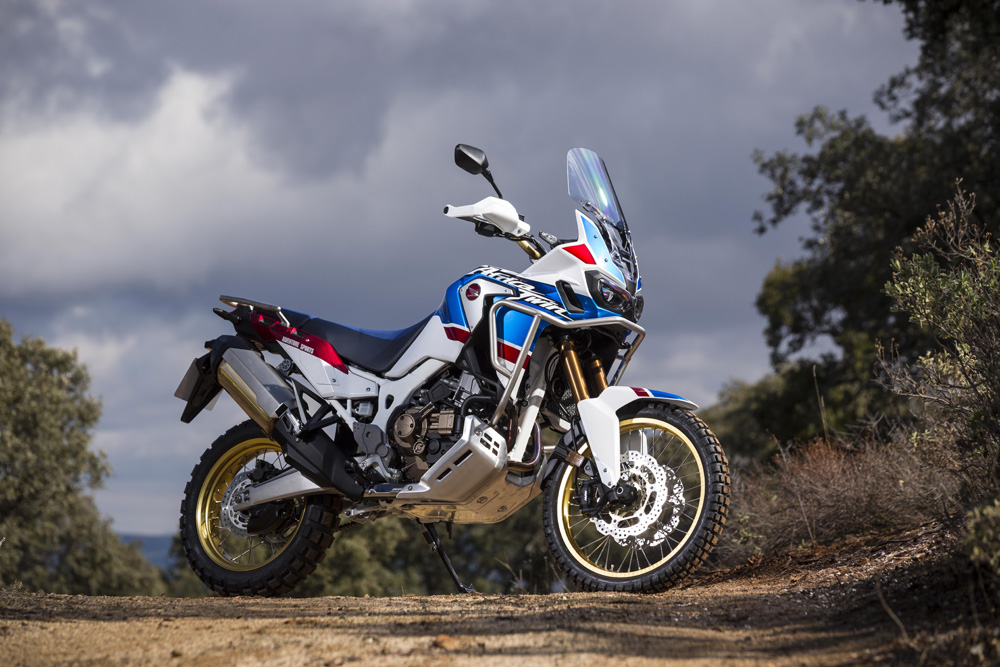 The family is getting better

The MY18 “Africa Twin Adventure Sports” features some interesting changes. There is also a new colour scheme: black with bronze lettering, which we also had a chance to ride. 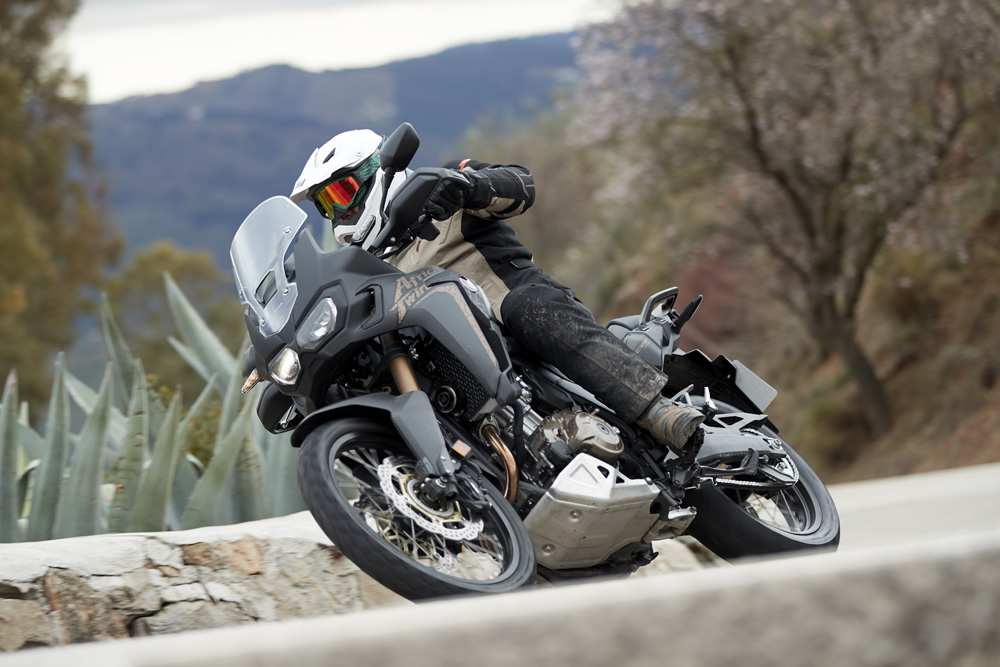 The first – and main – version has ride-by-wire. Bye bye old throttle cable; the Africa Twin is becoming more electronic. The by-wire throttle gives Honda a chance to refine the bike’s riders assistance: there are now four rider modes, Tour, Urban, Gravel plus a User mode, where you can choose over 3 power delivery modes, 3 engine braking modes and 7 traction control settings (TC can be disconnected too). The instrument panel is new too, although it’s not too easy to read in some circumstances (in direct sunlight or with a thin layer of dust whilst off-road). Despite the by-wire and unlike some competitors, Honda still does not feature a cruise-control on the Africa Twin. 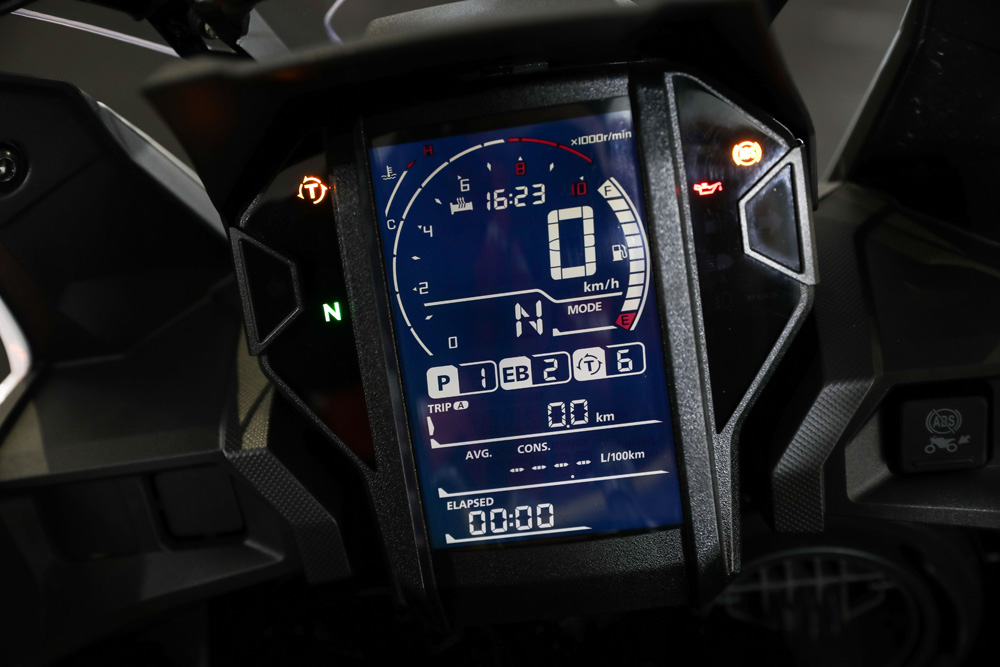 Foot-pegs are also larger, for better off-road ergonomics. Indicators now have a self-cancelling function, and activate briefly as a warning during emergency braking.

Being only two years old, the engine remains pretty much the same: the 95 hp output is on par with the Triumph Tiger 800 and the forthcoming BMW F850GS, but the Africa Twin has an interesting torque figure, with 98 Nm at 6000 rpm. If you take the “manual” gearbox version, you’ll be please to know that there is now an optional quick shifter which works beautifully when changing gears either up or down. 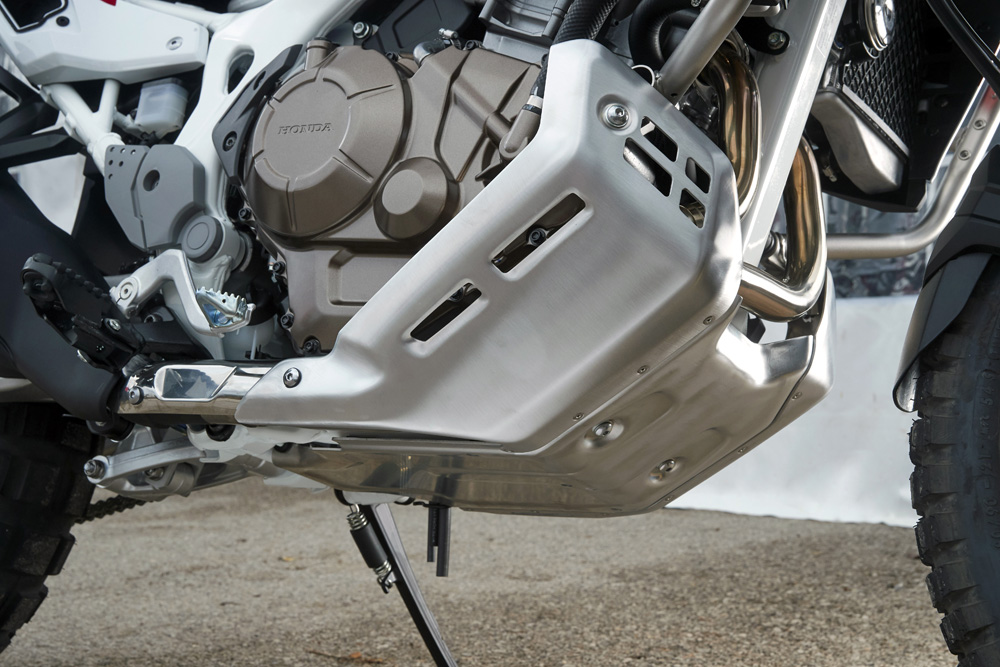 On the engine, a new balancer shaft and a revised exhaust (2 chambers and 4 litres instead of 4,6 litres and 3 chambers) give a deeper exhaust note and an easier revving engine. A new battery is also part of the MY18 package: it’s 2,3 kilos lighter and supposed to last four times longer.

That’s not all: Honda homologated two new set of tyres on the Africa Twin. New owners will have a chance to ride on the Dunlop Trailmax 610W (supposedly better on wet surface than the previous OEM Dunlops) or the excellent on road Bridgestone Battlax A41. For off-road use, the Continental TKC80 is officially homologated by Honda for use on the Africa Twin. 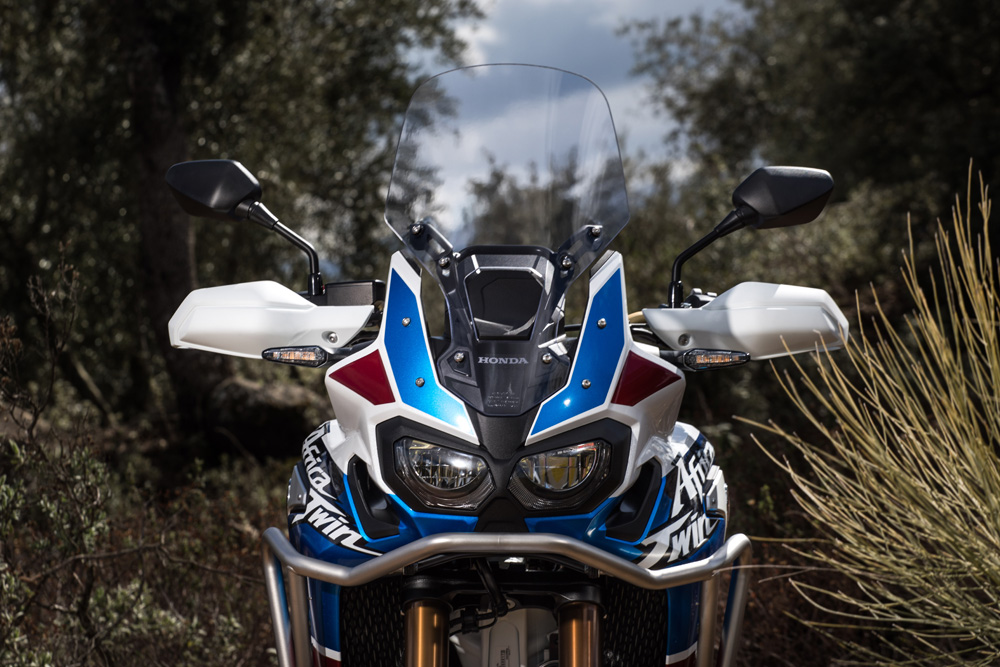 The bash plate and crash bars are a genuine invitation to Baviaanskloof on a rainy day! The windscreen is 80 mm taller (but somehow narrower on its basis), the fuel tank is bigger (24,2 litres instead of 18,8 litres), the seat is new and the heated grips are also standard on the Adventure Sports. There is a 6 kilograms increase, making the standard gearbox at 243 kilos and the DCT 10 kilos more, which is not that much if you consider the difference in specifications between the two versions. 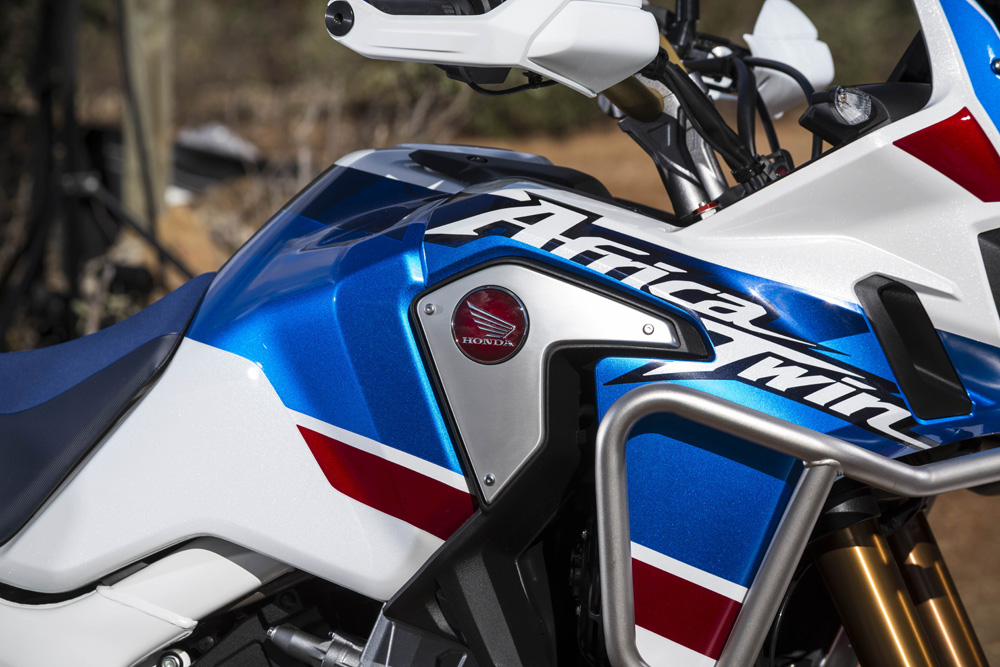 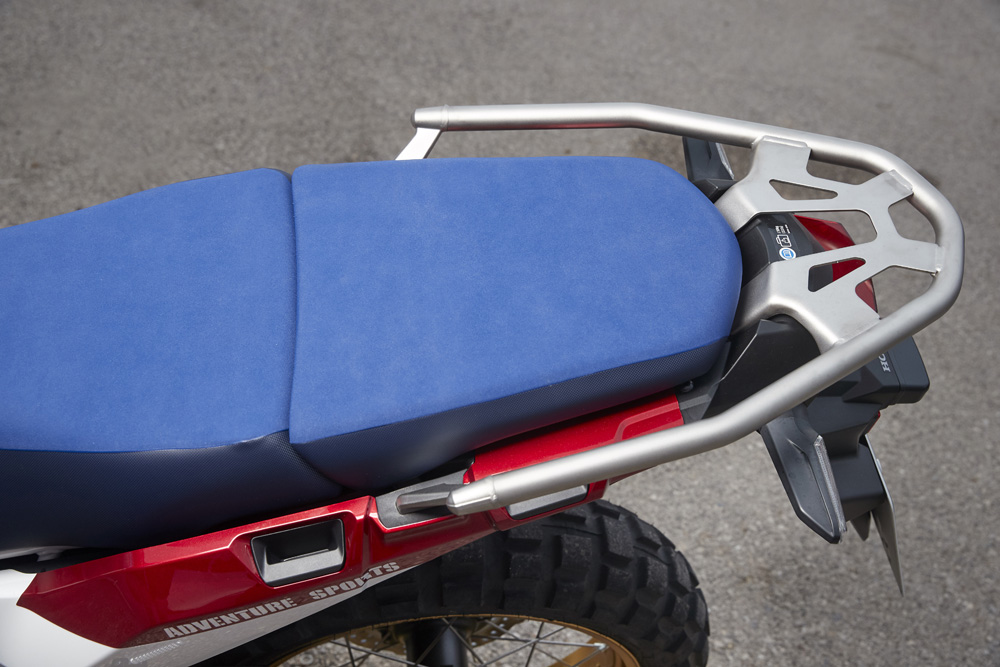 But with a 900 mm plus height, a figure that is normally in the league of proper enduro machines, plus a wider tank, the Adventure Sports will require its owner to have the proper body shape… and the proper leg size!

Start the engine, close your eyes and you’ll instantly notice the new exhaust note. It’s deeper, more metallic and, the engine revs quicker too (if you blip the throttle a couple of times whilst in neutral, the motor almost has the sound of a Ducati). If power and torque figures are not outstanding (95 hp at 7500 rpm and 98 Nm at 6000 rpm), the Africa Twin engine is adequate enough for daily use, off-road fun and even long distance touring. This is a very capable engine, obviously not thrilling like a 1290 KTM Adventure can be, but the level of performance makes it a perfect companion and is able to eat miles forever, at only 4500 rpm at 130 km/h in top gear. When engaging the “gravel” mode the TC settings default to 6 out of 7. To increase the TC, just give a couple of pushes from the left index on the switch assembly and the bike is ready.

Once on board, two of the Adventure Sports assets can be noticed. The ride-by-wire throttle delivers perfect fuelling and a great feeling, and the new seat is more comfortable than the one from the standard version. 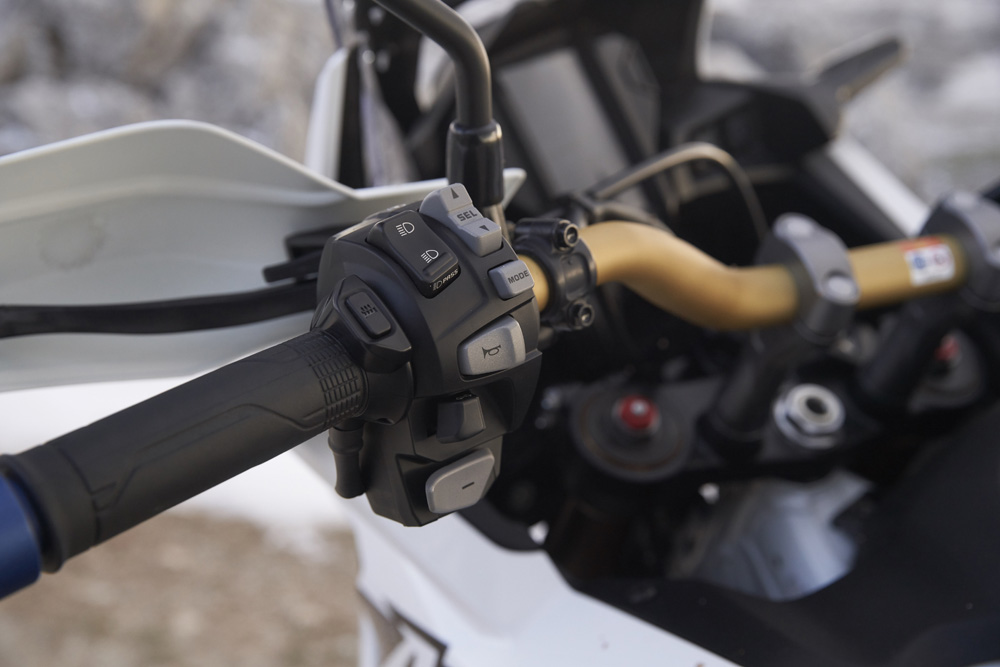 Once on your way, the windscreen protection could have been a bit better (there is some turbulence if you wear an off-road helmet), but the agility, despite the size and mass of the bike, is just awesome. You can eat twisties all day long like scrambled eggs at breakfast and there is no effort required to get into corners or even change line. The front fork dives a bit under hard braking, like most of the good old trail bikes. 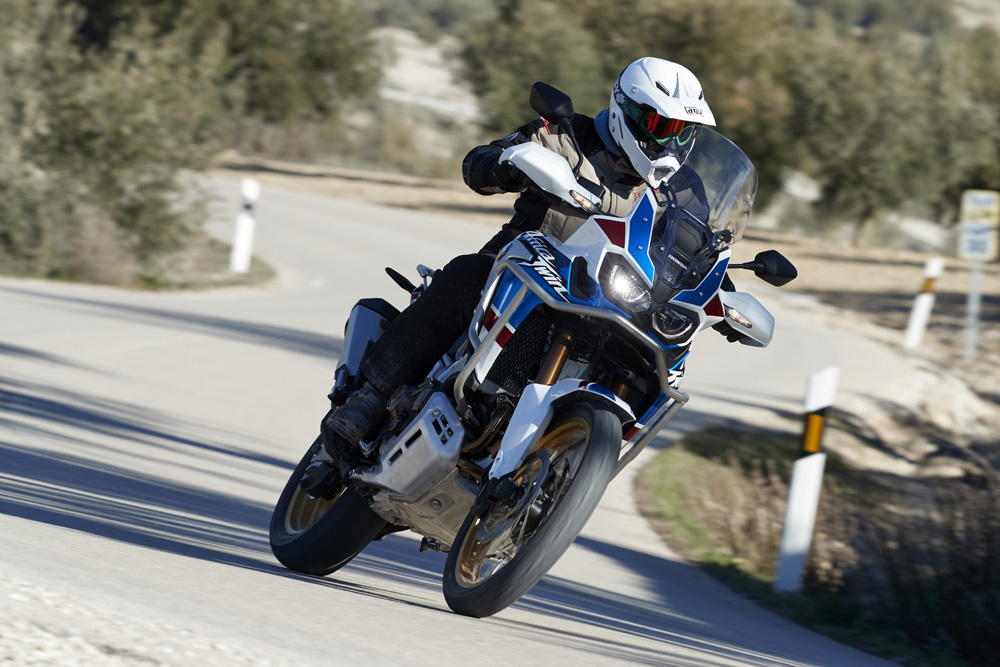 On the gravel road, the standing riding position is also better than on the standard Africa Twin, as the handlebar has been raised by 32,5 mm and is also now 6,5 mm closer. On gravel, high-speed stability and suspension efficiency is spot-on. 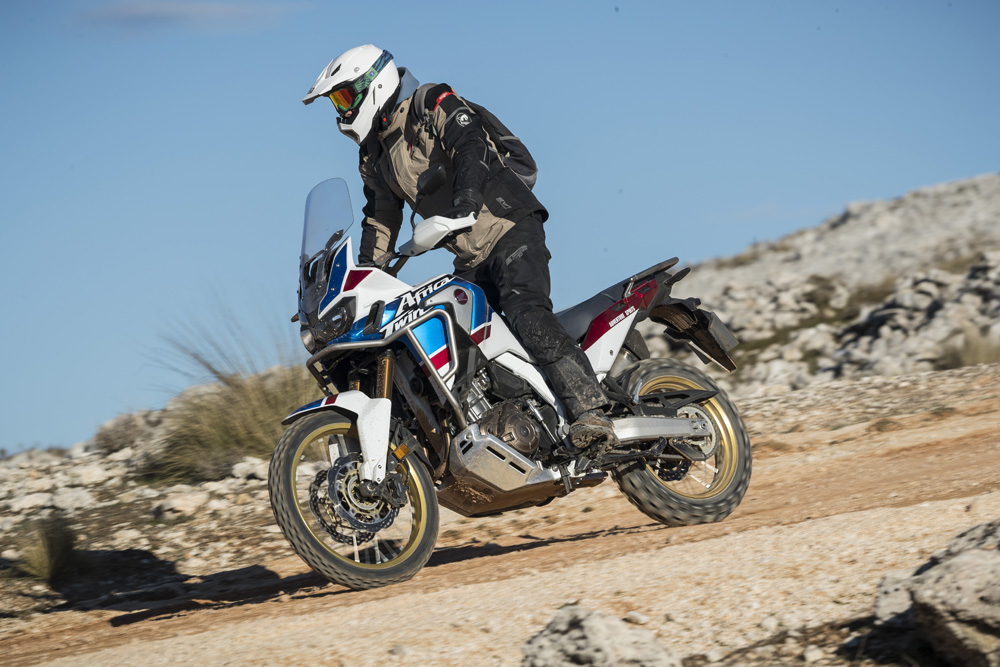 The re-launched 2016 Africa Twin was a real winner and the Adventure Sports is even better. More comfort, more fuel range, more off-road abilities, more versatility and more of an adventure look: no doubt the South African market will give it a very warm welcome, as it’s the perfect match for your stereotypical African adventurer.