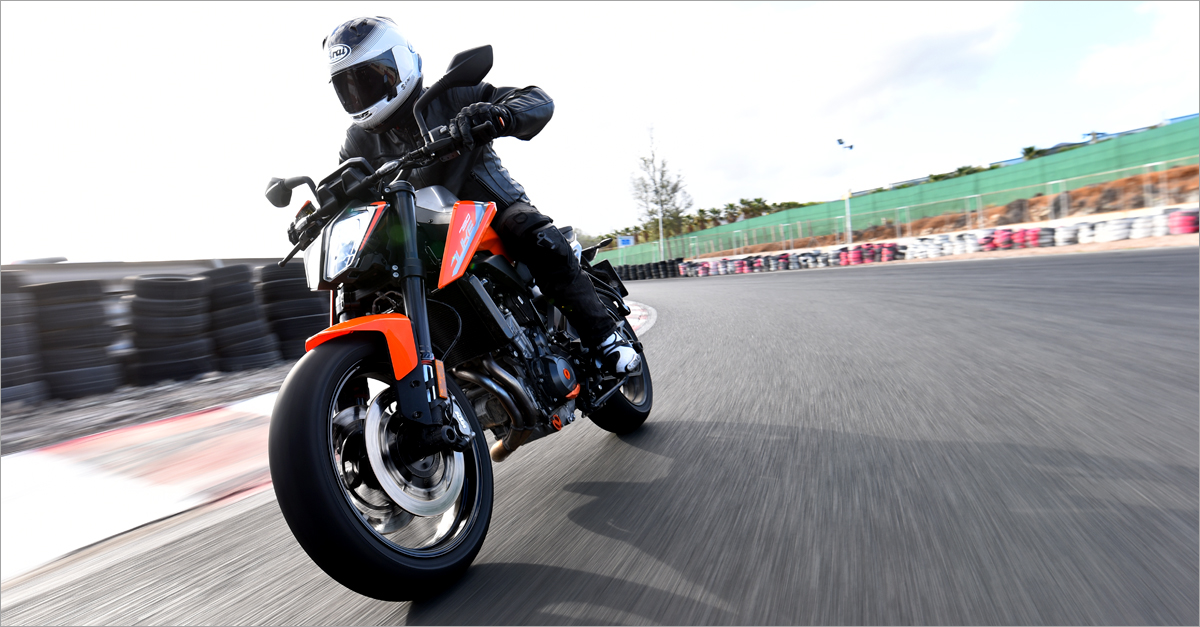 111 000 hours of human work, 60 people being involved full time in the R&D department, 604 800 kilometres of intensive dyno testing and more than 900 000 kilometres spent testing on the open road: when KTM creates a new machine, they put all their means into reaching their goals.

The 790 Duke is a hugely important machine for the Austrian manufacturer. KTM is known for bikes that target rather niche markets, like their intensive off-road range, and the more exclusive and powerful 1290 twins. The worldwide market for mid-sized naked bikes is huge, and now KTM has bought out a serious contender to compete in this market.

The KTM 790 Duke is perfect for the South African commuter market, easy and fun to ride. 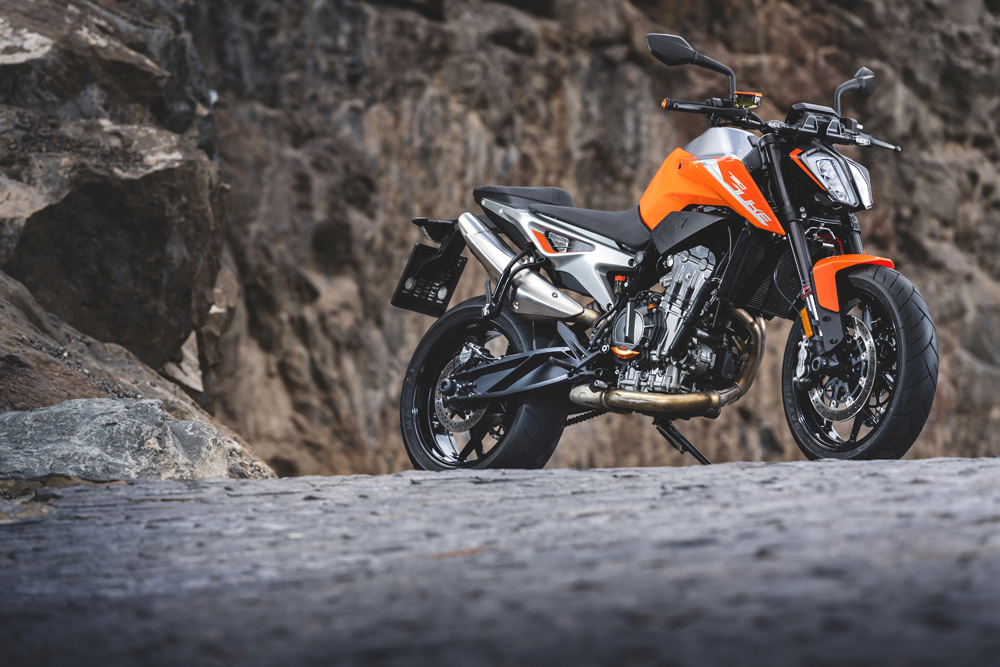 Apart from the headlight that looks very similar to its bigger sibling the 1290 Super Duke R, the 790 Duke is a completely new bike. The engine is KTM’s first parallel twin, designed and built in-house. The first thing you notice is how unbelievably compact the design is. Once on-board, your knees feel like they are almost touching together, as the bike is so narrow! The engine is the most compact of its class. 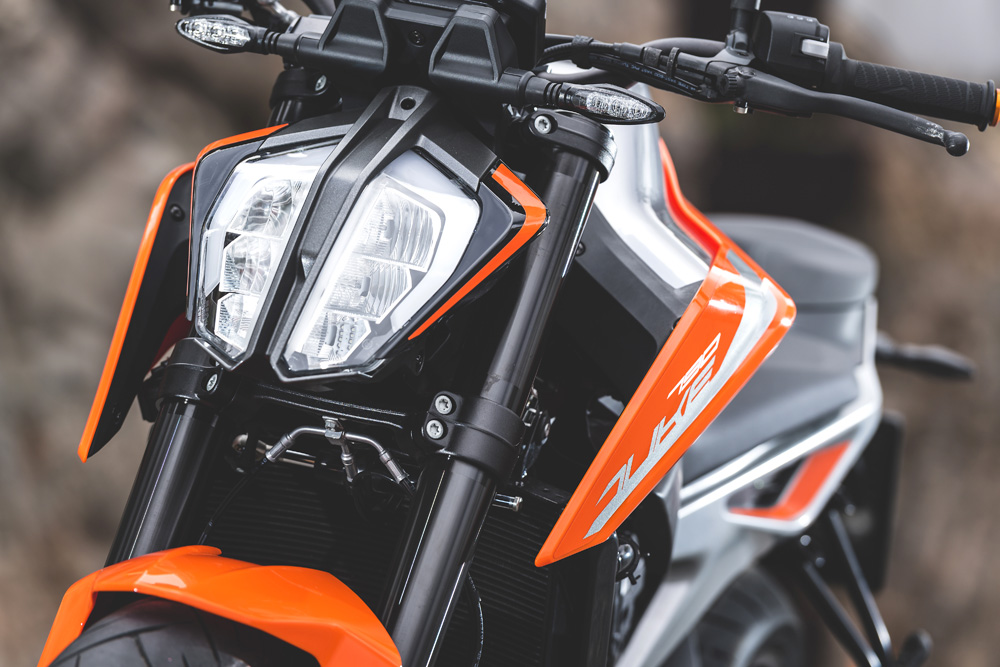 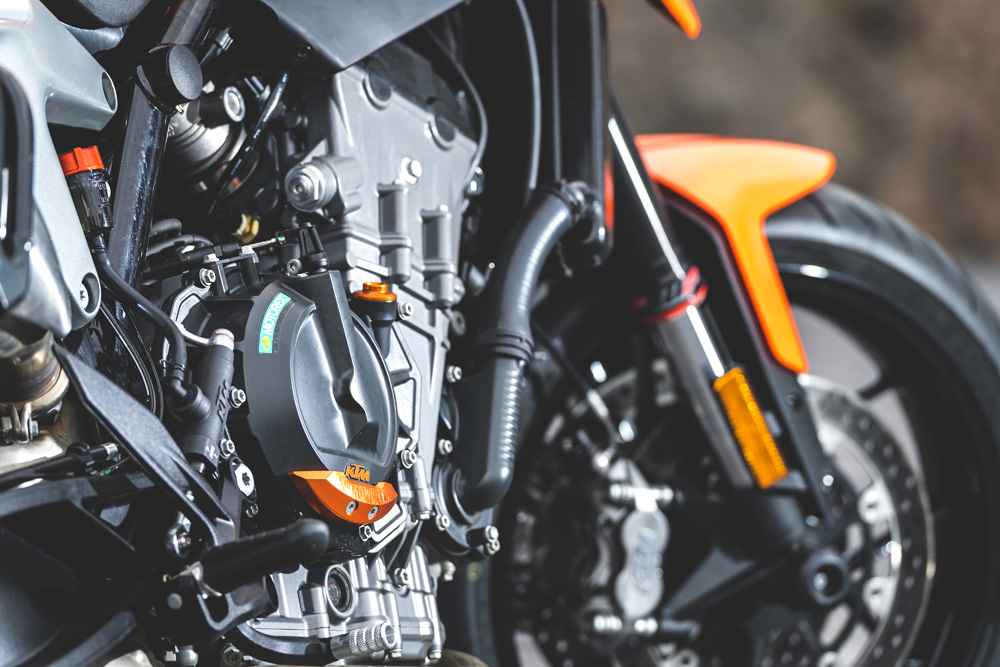 KTM has made a very modern engine, indeed. Forged pistons, horizontally split crankcase (a first in KTM’s engine history), double overhead camshaft, a crank pin offset of 75 degrees, two balancer shafts, DLC coating nearly everywhere and an air-box located under the seat: all of that contributes to make the 790 Duke so nimble.

The KTM has another winning card in its game: with a 169 kilograms weight, the 790 Duke is nearly the lighter of its class (unfortunately, the Triumph 765 Street Triple claims 166 kg), but still, the Duke remains much lighter than any Japanese competition. 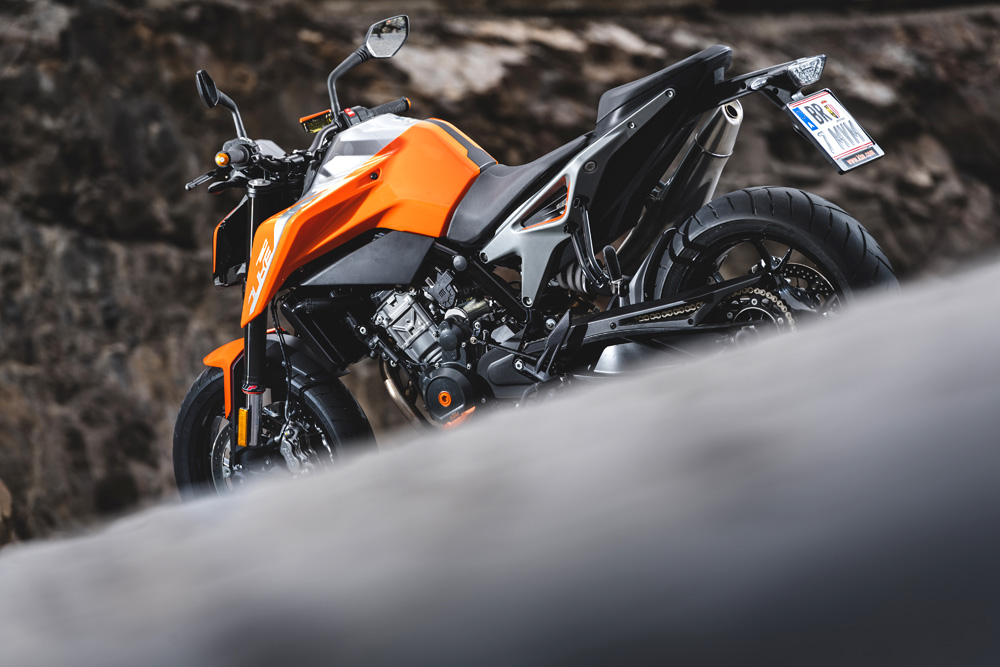 As usual, the suspensions is provided by WP and the brakes are coming from J. Juan Brake Systems (Spanish company), and they know what they are talking about since they supply the brakes to Johnny Rea’s world championship winning ZX-10R. Tyres come from a little-known brand in the street bike market: they are the Maxxis SuperMaxx ST, which where developed on the 790 Duke. 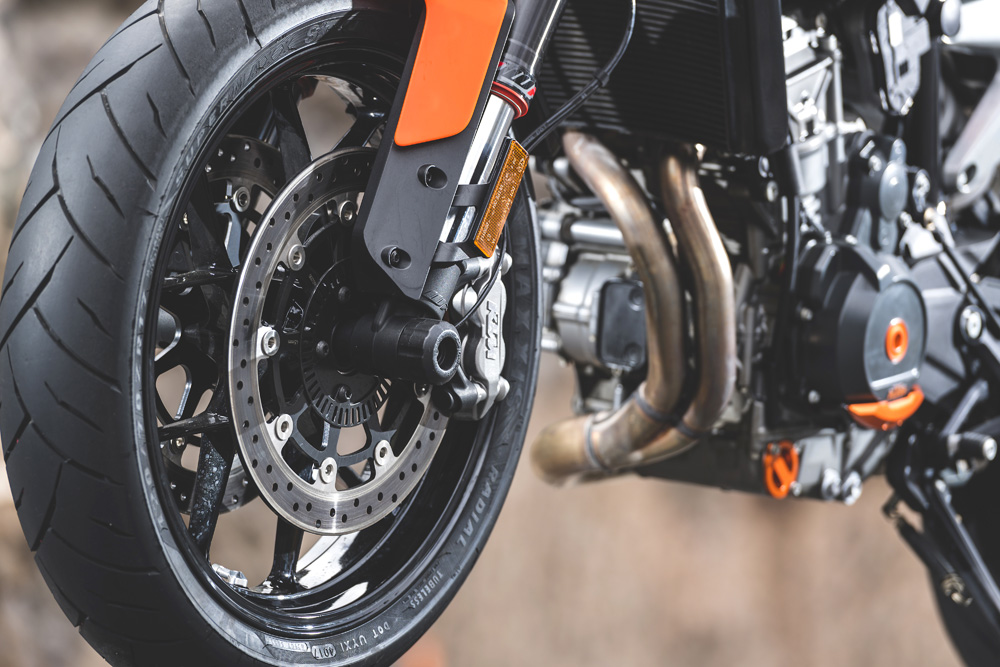 That’s not all: we are in 2018 and this is modern times. The 790 Duke provides, by far, the most comprehensive electronic package of its segment. Cornering ABS, traction control, wheelie control, riding mode (Rain, Street, Sport and Track), motor slip regulation: the KTM 790 Duke has all it needs to combine safety and fun. 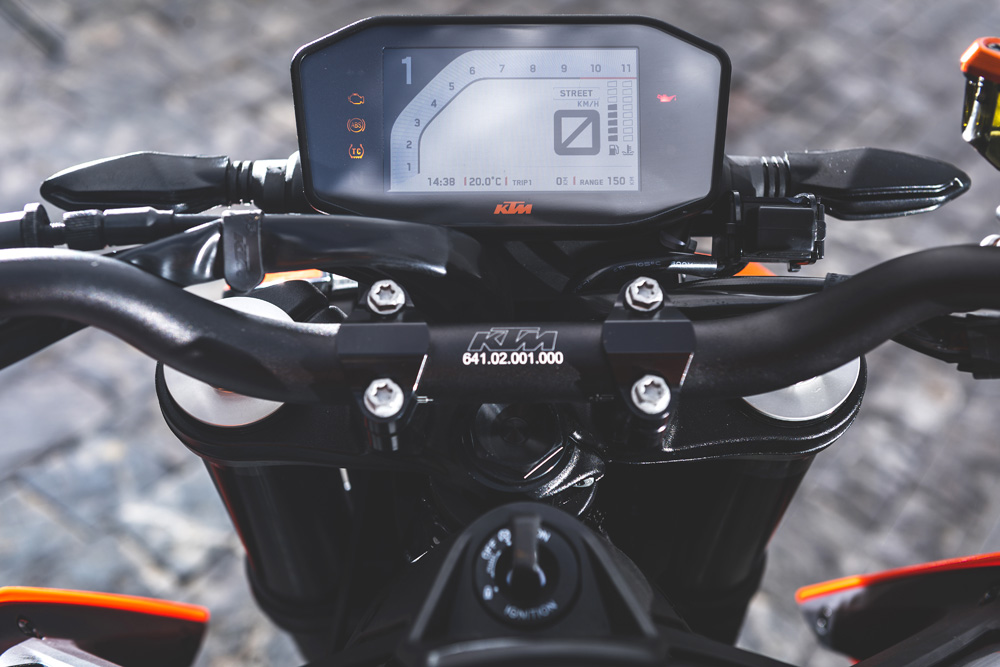 There is a lean angle sensor unit that provides safety under wet or tricky conditions. When you activate the Supermoto mode, this disables the rear ABS, so you can slide your rear wheel into a corner whilst keeping some safety with the front end.

You can do your own research: no bike in that class has so many bells and whistles. Even the clutch-less up & down gear shifter is standard!

We had the chance to ride the new KTM 790 Duke on the twisty mountain roads of the Gran Canaria island, right in the Atlantic Ocean and where winter is mild, as its located on the same latitude as the beginning of the Sahara desert. We had also the chance to clock a few laps on the islands main racetrack. And it was a lot of fun. Let’s put it frankly: the KTM 790 Duke is certainly one of the most agile bike of its class. Take a corner. Many corners. Some fast, some slow, some with an apex that you’ll have to guess while being in action. It doesn’t matter the speed or the radius, the 790 Duke eats them all, even when you have to ride with a bit of improvisation. The 790 Duke, is the kind of bike that gives you instant confidence and ease. A couple of kilometres is like you’ve known each other forever. Just look into a corner and you are there already. 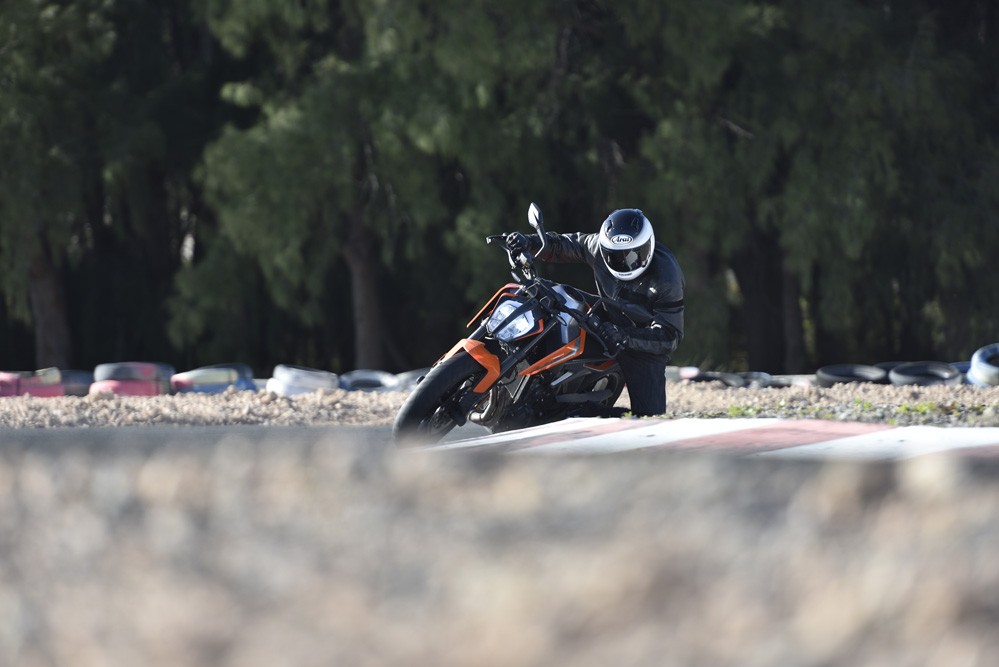 The 790 Duke makes you smile under your helmet. The engine pulls strongly, although always with soft manners, with smooth power delivery at low revs (you can cruise at 50 km/h in 4th gear without vibrations) and a decent power band between 6 and 10 000 rpm. We had the chance to ride stock standard versions and some equipped with the optional Akrapovič exhaust. The Slovenian accessory sounds better at stand still, however, the standard pipe sounds better whist riding, it has a deeper and more metallic note. 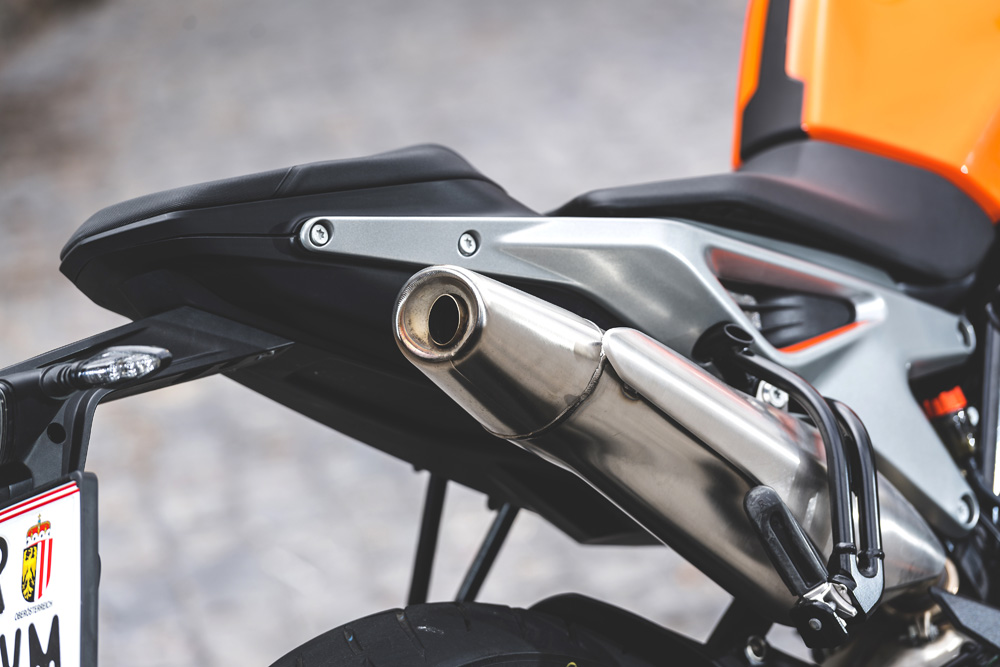 If the archetypal KTM is ready to race, the 790 Duke is, well, nearly there, but quite not yet. And for two reasons: the first comes from the nearly non adjustable suspensions (only the rear shock is preload adjustable). They are okay and do the job, as you can still ride fast. However, the overall setting is a bit on the soft side and the feedback is just average. The second reason lies on the tyres. We should not have some prejudice, as the Taiwanese Maxxis performed quite well on the open road and they are, at least, as good as some mid-range Dunlop or Bridgestone that you find on many entry-level bikes. The grip was good and the feeling was okay too.

Once on the racetrack, I’ve been delighted to find a trustable front end, but the rear tire suffered early from a lack of grip during strong acceleration. At least, they slide in a very progressive way. 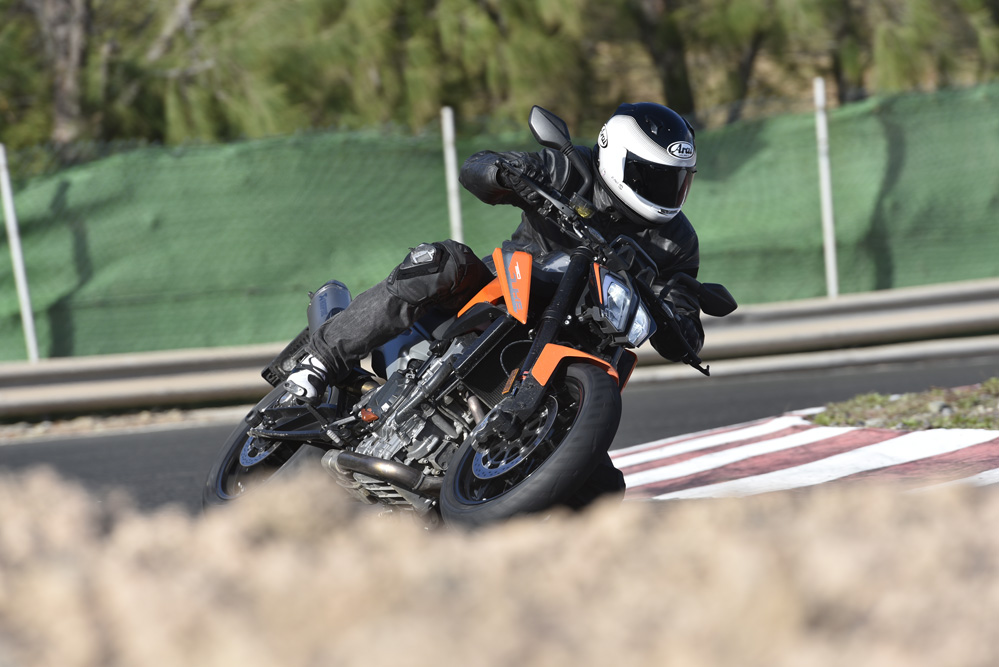 So far, this test has proven a new strong entrant in the naked bike class. Light and fun, the KTM 790 Duke may not be the biggest, the fastest or the most impressive thing you can buy, but the overall package is a extremely appealing, especially if you consider the sharp lines and the state-of-the-art electronic package.

So on my side, I’m pretty much looking forward to a possibly forthcoming 790 Duke R evolution, with better suspensions and tyres, that will be more in line with the genuine KTM philosophy – Ready To Race. 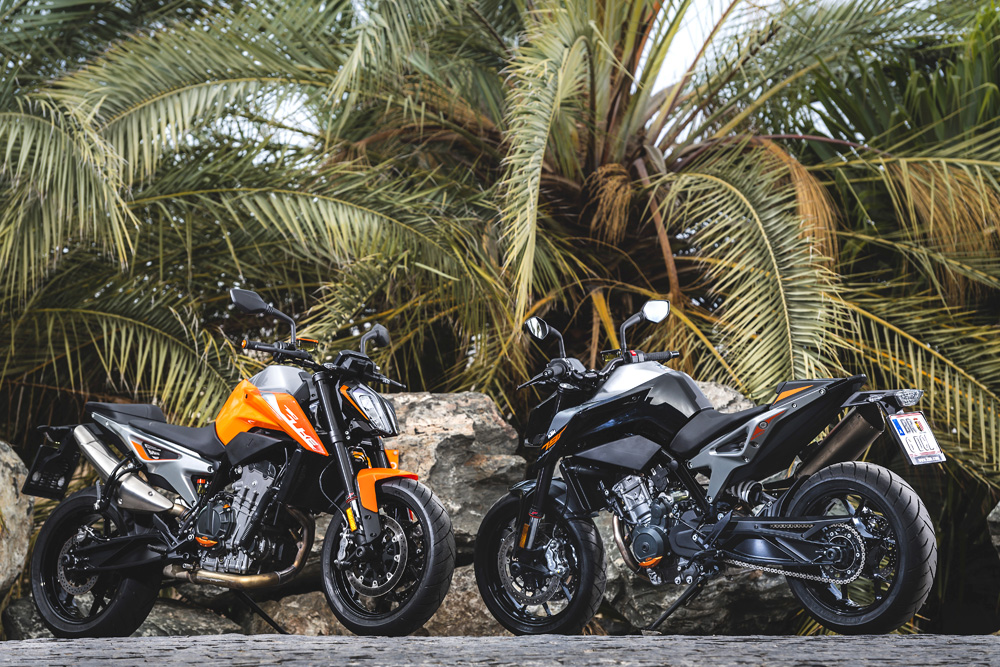 The other good news of this first ride test relies in the engine potential: it will be inside the  forthcoming (planned for early 2019) 790 Adventure – this will be a gem to ride, I’m sure.