So what is this Motul memories all about, you may ask? Let me explain. I started my motorcycling in the ‘70’s. That was the era when, as a sixteen year old, a person was entitled to get a licence for a motorcycle with an engine capacity of 125cc or less. For the vast majority of youngsters that meant a 50cc autocycle, or “Aut”, as we called them. For me, that first meant a Honda S50, and then a Honda SS 50 GT. Needless to say, that little blue Honda with the white pinstripes on the tank was my absolute pride and joy. To some, a fifty was a convenience. Less hassle than pedalling a bicycle. To me it was the beginning of a wonderful new world of adventure. My universe immediately shrunk. I could now venture far and wide, free of the shackles imposed by my pedalling ability. Far distant places, like Durban, had an immediate allure. Question was, “will my Honda make it, or will it overheat, seize and expire”? In my search for answers I started delving into the life blood of my tiny four stroke Honda. I began to understand the importance of lubrication. With few exceptions, motorcycle engines of the day were air cooled. This meant that in our warm South African climate, air cooled engines were subjected to temperature extremes that, if not for proper lubrication, would snuff out the life of your high revving motor in a split second shriek of tortured seizing metal. Your bikes piston getting so hot that it expanded to the point of melting to the barrel. The only thing that could prevent this catastrophic destruction of your bikes engine was the engine oil. For me it was a no brainer! Two things you NEVER compromise on are the oil you run in your motor and the quality of the tyres. Do so, and things can easily end in tears, or worse. 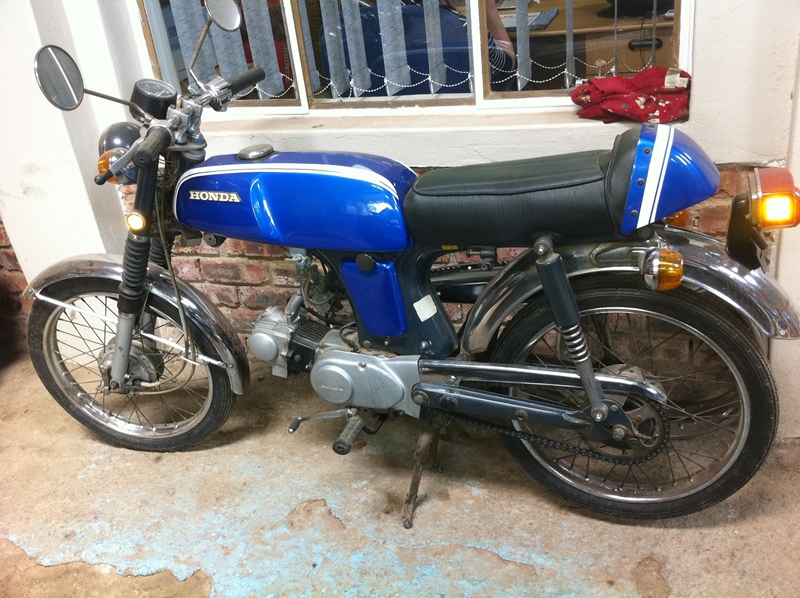 I started following endurance racing. The Bol d ‘Or is the motorcycle equivalent of Le Mans. In fact it is staged at the same circuit, the bikes just go the other way round the circuit. Surely, I reasoned, these bikes, running flat out for twenty four hours, would use the best possible oil to give themselves the best chance of finishing, let alone winning? That is how I discovered a French motor oil called Motul. This company were on a quest to develop the best possible oil to meet the demands of “the Bol”. The French are absolutely passionate about endurance motorcycle racing, so it is probably not so surprising that a French oil company developed oil specifically to meet the extreme needs of this particular motor sport. I reasoned that if Motul could keep these engines in one piece, it should do the trick for me too. From the moment that Motul became available in S A, I have never used any other oil. So it is that over years of riding countless thousands of miles around Southern Africa, Motul has literally kept things together, giving me endless motorcycling pleasure and creating many Motul memories. Let me tell you about just one that springs to mind. A couple of years ago I set off with 11 guys on a ride around the Okavango Delta in Botswana. We left Pretoria around 6am late in October. Those of you that have travelled through Bots in summer will know how blisteringly hot it gets. It is still too early for the rainy season to bring relief to the parched land. Trees stand scorched and dry across the dusty land. We were on our second TVS Tour. A year earlier we rode 5 TVS Apache Indian built bikes to Vic Falls in Zims. Our route took us through Botswana, through the border at Kasane, and on to the Falls. We then travelled down through Zims to Beit Bridge and eventually back home. The guys so enjoyed this trip that they started clamouring for another “TVS Tour”. Enter the Delta Dawdle. Why Dawdle? Well, TVS’s are either 160 or 180cc’s, so speed is not a big issue. Part of the enjoyment of these trips is that you kind of take a smell the roses approach. The bikes are typically running at more than 7000rpm [redline at 9] for 3500k”s. Hence the Motul connection. Prerequisite to coming on a TVS Tour is that, prior to departure, you fit a fresh oil filter and change your oil to Motul. Temperatures in the north of Bots at this time of year hover constantly around 38 to over 40 degrees C. The tiny TVS singles are subjected to an awful hammering as they rev close to there limit for days on end. To give them the best chance of surviving this abuse you have to be able to trust your engine oil implicitly. 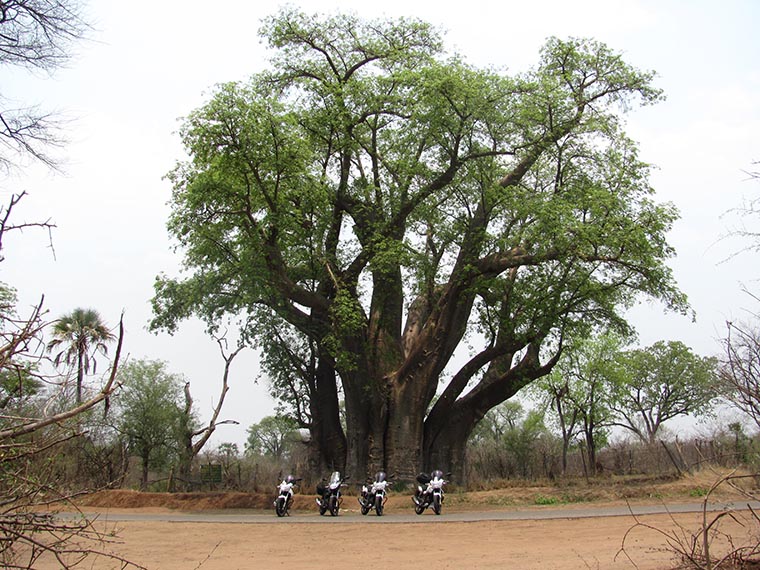 The first day took us to Palapye, 500 k’s from home. No problem. By late afternoon we were all sitting at Itumela Camp, sipping on the first of a series of bitterly cold St. Louis lagers in an attempt to rehydrate our heat battered bodies. War stories were a little different to usual. Guys were not talking speed, but rather how they were averaging over 40 K/l on there TVS’s. 700 k’s on a 16 litre tank. Incredible. Day two had us off to an early start, trying to hang on to the cool of the morning for as long as possible. We ran the bikes harder too, and in no time had despatched the 180 k’s to breakfast at the Wimpy in Francistown. By the time we left for Nata two odd hours away it was properly hot. 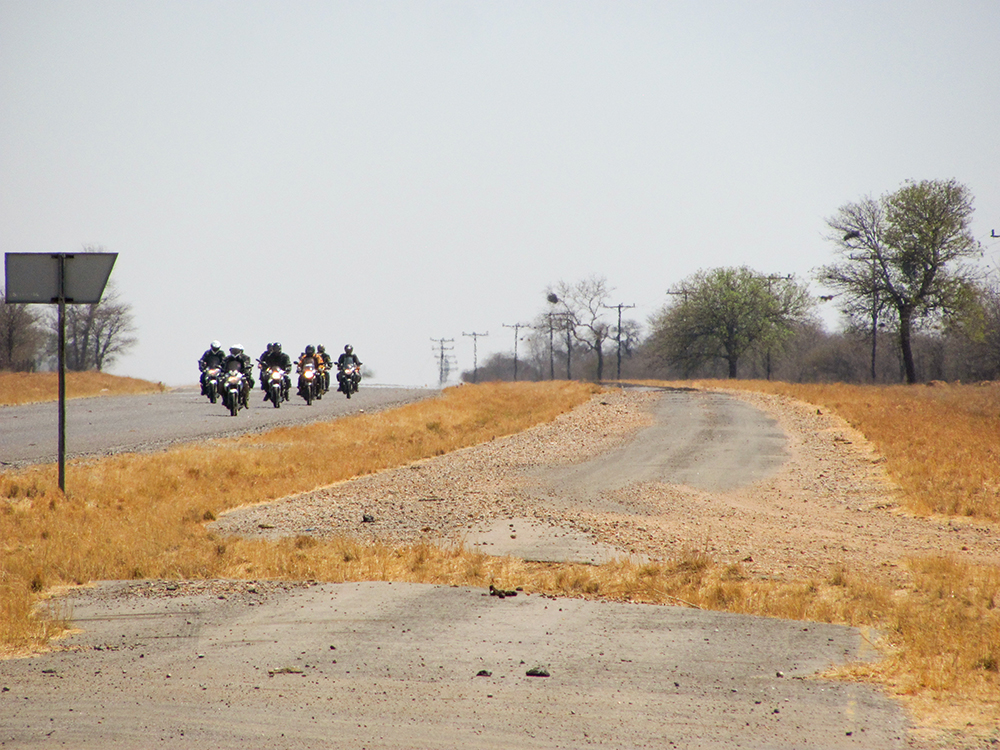 At one point the guys stopped under a tree, sitting in the shade, wilted in the dusty cloudless hell. Pulling in to Nata lodge for lunch, we dipped our t shirts and jackets in the pool and put them on, revelling in the temporary cooling effect of the water. Back on the bikes we travelled on another 100 k’s to Planet Baobab, our planned campsite for the night. The gutsy little Motul lubed TVS’s had carried us another 500 kays through hellish heat. Every bike was running like a train, sounding great and incredibly, upon checking, required no oil top up. See why I insisted on Motul 5100? The stuff is flipping magic! Planet Baobab were fully booked, so just as we were facing two more hours of riding to Maun, the travel god’s smiled on us. As we were being sent on our way, hot and dejected, a buddy, Nick Weidemann walked into reception, heard of our plight and immediately offered to share his campsite with us. Score! To reciprocate we shared our magnificent Botswana fillet steak with Nick and his family. Steve Coleman, notorious from the Apache Raid On Vic Falls, started meting out “straf doppe” that he called Minkie’s, “cause they were equally hot”, being a concoction of Stroh rum, tabasco and a drop of his Triumph Bonnies fork oil. We dined like kings and all turned in reasonably “well oiled’. The next day we cruised to Maun in a rather subdued fashion and set up camp at my usual haunt, Old Bridge Backpackers. A bit of “hair of the dog” soon got the party going again and a memorable evening was spent dining on the banks of the river, under the ancient strangler fig tree. The water level in the Delta was particularly high that year. So much so that the water reached Lake Ngami, south of Maun. Something that only happens every ten years or so. We battled through the deep sand to see this spectacle. Trees stood waist deep in water. Here and there Maribou Storks stood like silent sentinals, waiting for a fish to venture close enough to become lunch. 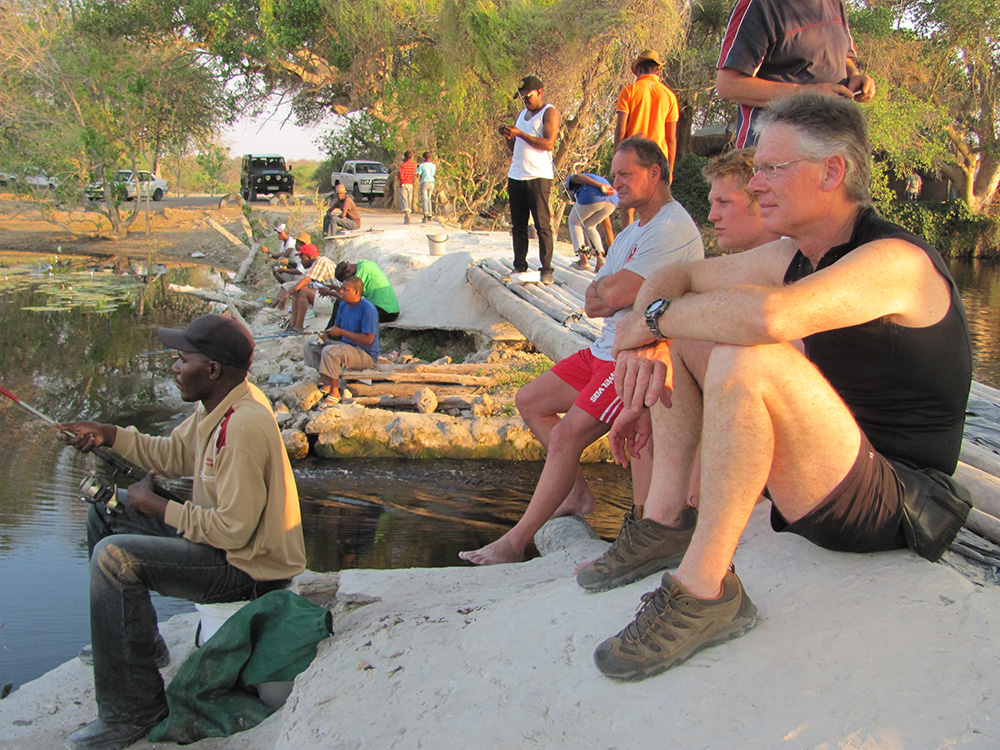 Back on the road we circumnavigated the south of the Delta, then rode north, crossed the Namibian border and traversed the 30 odd kay’s of dirt road through a game park. Maik, a German friend, experiencing his first visit to Africa, was at a total loss for words when he saw some elephant bathing 100 metres away at a water hole. The first free roaming ellie he had ever seen. 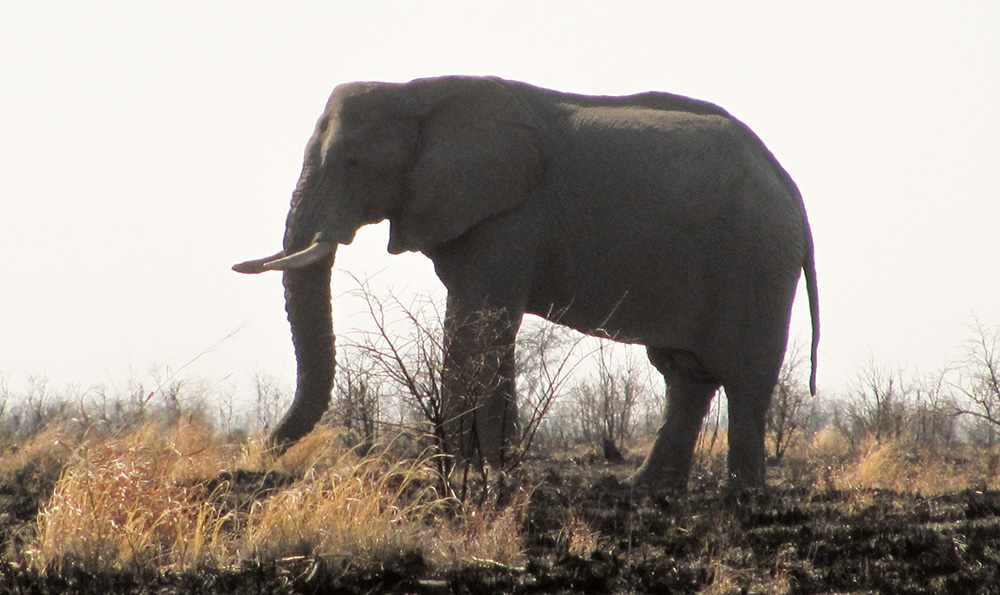 Nunde lodge on the Kavango river was our home for the next two days. The riding and the heat had so sapped the guy’s energy that they all voted for a day’s R and R. Sitting on the deck over the river, watching the blood red sun, coloured by the African dust, sink into the river, all was extremely well with the world! 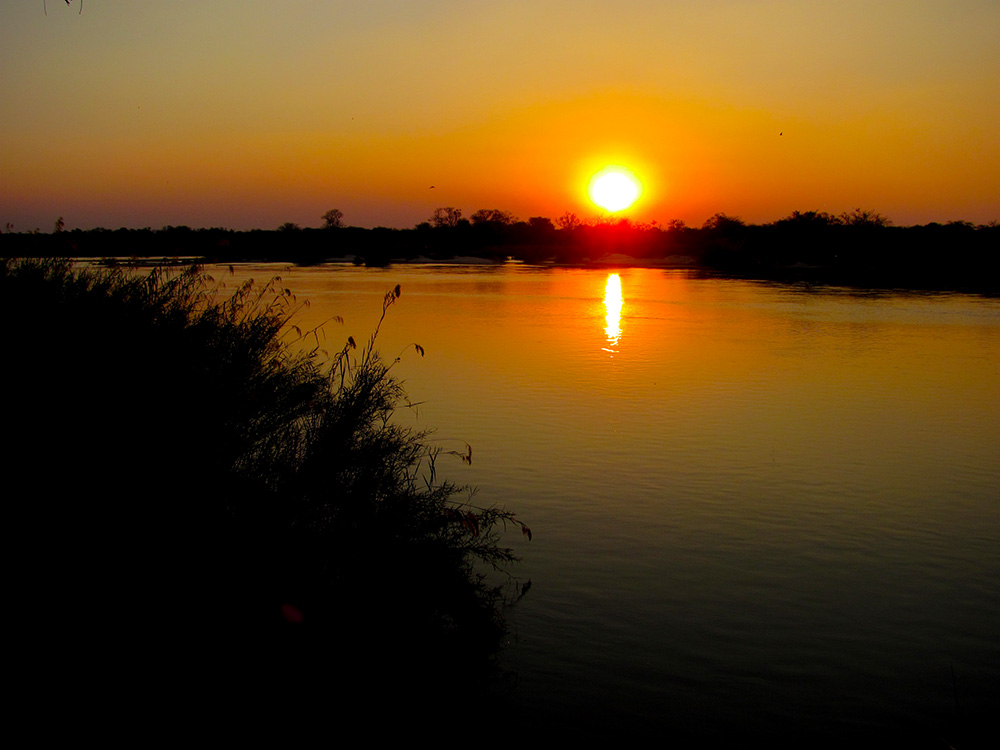 Resuming our travels, feeling bright eyed and bushy tailed after our rest, we were greeted to the spectacle of a huge herd of buffalo crossing the Caprivi strip as the sun rose on another African day. Running like clockwork with the Motul in their motors, the TVS’s carried us down the Caprivi, back into Botswana and through the Chobe game reserve to Kasane. By now everyone knew that they could totally trust their Motul lubed bikes to go the distance, so we just totally relaxed and soaked up the experience. Heading south from Kasane, we enjoyed the abundant game that roams free across this vast land. Stopping occasionally to allow herds of elephants to cross the road, we cruised down to our overnight stop at Woodlands campsite, 16 odd kay’s before Francistown. With tents pitched, we cooked up a storm with the final braai of the trip. We woke to find that some guys had pitched their tents on termite holes. The little suckers simply munched their way through the tent and, would you believe it, right through blow up mattresses! Talk about that sinking feeling! By the way, in case you were wondering. TVS tours have no back up vehicles, and we carry all our kit on the bikes. Soft boys need not apply! On the penultimate day of our trip we ran south, crossed the border, and on to Ellisras. We decided to stop in Vaalwater for our final night at the little dodgy hotel. We ran over the mountain from Ellisras in a high speed TVS train, slipstreaming each other flat out to our destination. We saw 135 kph on the digital speedos as we played our game of tag. The final night saw the emergence of Minkie again, with Corporal Coleman dealing out the pain. What a trip it had been!. Tiny TVS’s traversing the harsh and arid African hinterland with that magic Motul muti in their bellies. On the following day, as it inevitably must, it was back to our everyday lives. The joy of riding motorcycles is that when life once again becomes a pain, for whatever reason, it is time to make more Motul memories of the two wheeled kind. 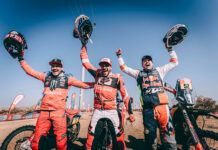 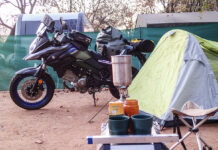