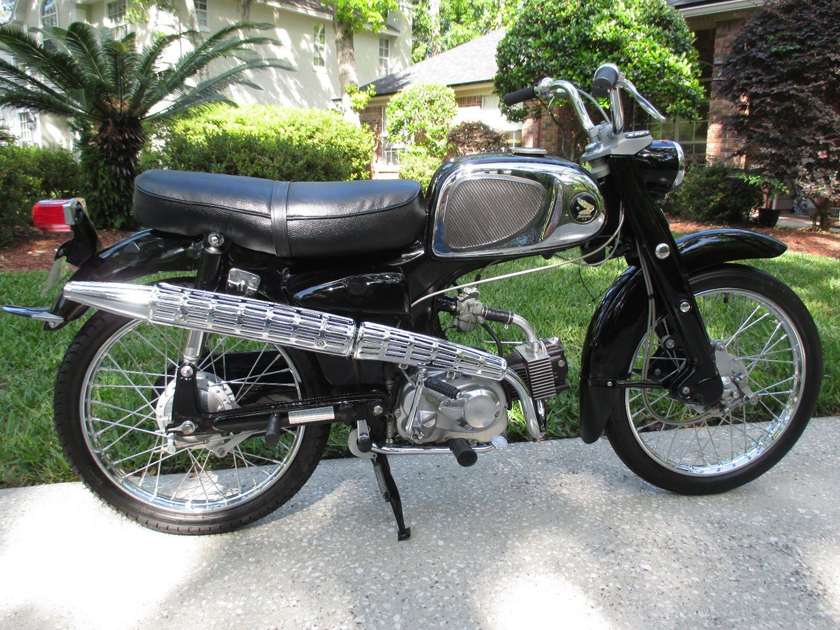 For those of you that started your motorcycling in the early 70’s, do you remember learning to ride? Invariably it meant getting to grips with a 50cc bike or, as schoolboys of the day called them, an “Aut” – probably short for autocycle. Believe me, ditching your bicycle and upgrading to an “Aut” gave you instant street cred amongst your peers. Arriving at a “session” (sort of open parties frequented by teens “back in the day”), with your right pants leg tucked into your sock to avoid chain grease from your bicycle, was decidedly uncool! Making an entrance on your “Aut”, with baffles removed from the exhaust of course, was way cooler! 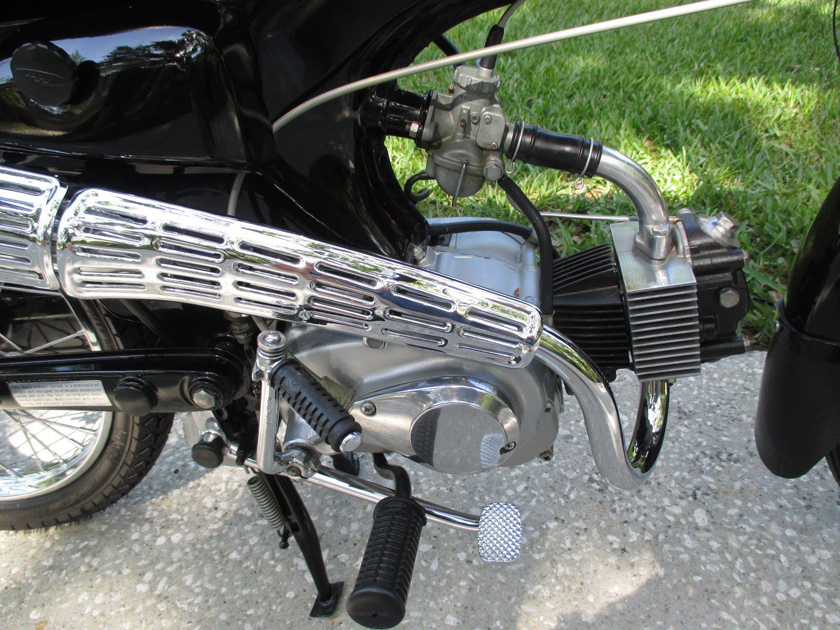 Speaking of removing baffles, a two stroke 50 relied on some back pressure to perform optimally. Whipping out the baffle paralysed the already lethargic little beast. The exhaust note went from muted buzz (hence the name “buzzbikes”), to the sound of a virile young man peeing into a jam tin. Not quite a Ducati Desmo at full chat you understand? 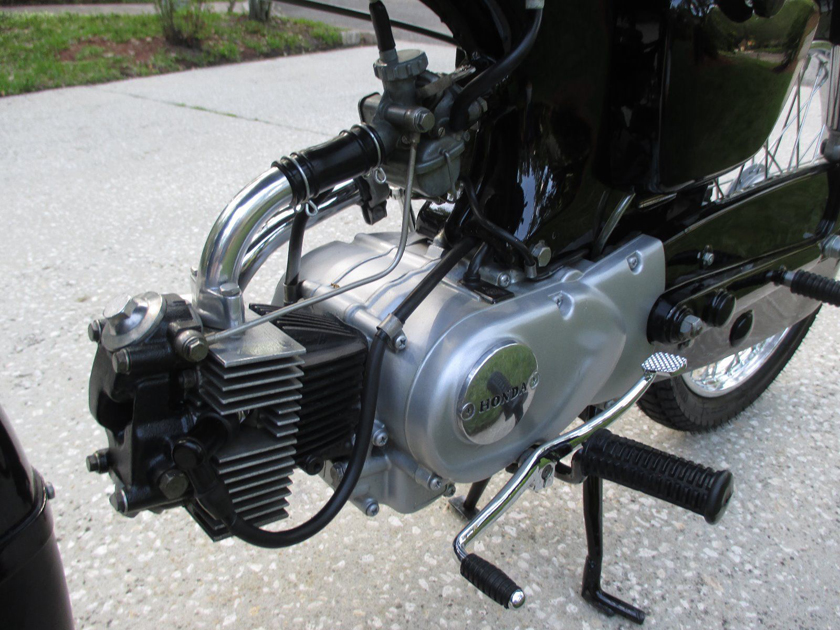 Four stroke 50’s were another story. Whilst the two strokes would run them ragged in the performance stakes, the tiny four strokes sounded the goods! The throaty beat belied the puny performance, and was music to the ears of “Aut pilots. Perhaps this is what influenced my choice of a Honda S50 as my first bike. The S50 was a bit of a hybrid. The frame was like that of the first C110 Honda, with pressed steel monocoque type chassis and front forks. The engine was the single overhead cam type, replacing the pushrod version of the C110. It, like the C110, sported a four speed gearbox. All subsequent Honda 50’s had 5 speed boxes. 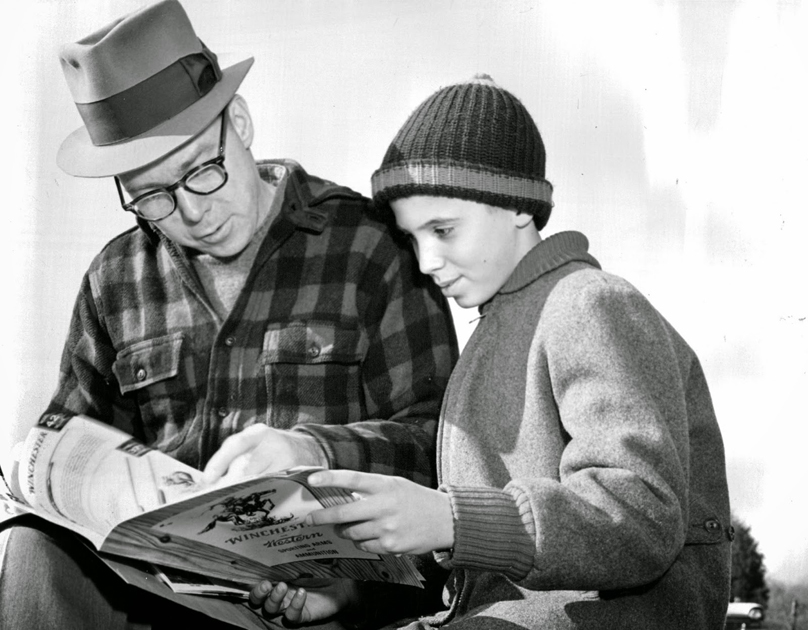 My acquisition of this little Honda was the culmination of a long and drawn out campaign. Despite the fact that I was only 14 and therefore still not able to ride legally, I lusted after a motorcycle. Thus began a psychological effort of unprecedented proportions to convince my dad that I truly needed a bike. Endless conversations on the topic plus brochures on relevant models were left lying all over the house. My poor dad couldn’t sit, sleep, eat or even relieve himself with out facing a pamphlet on Honda’s finest! Eventually he wilted under the relentless pressure and thus began my motorcycling odyssey. 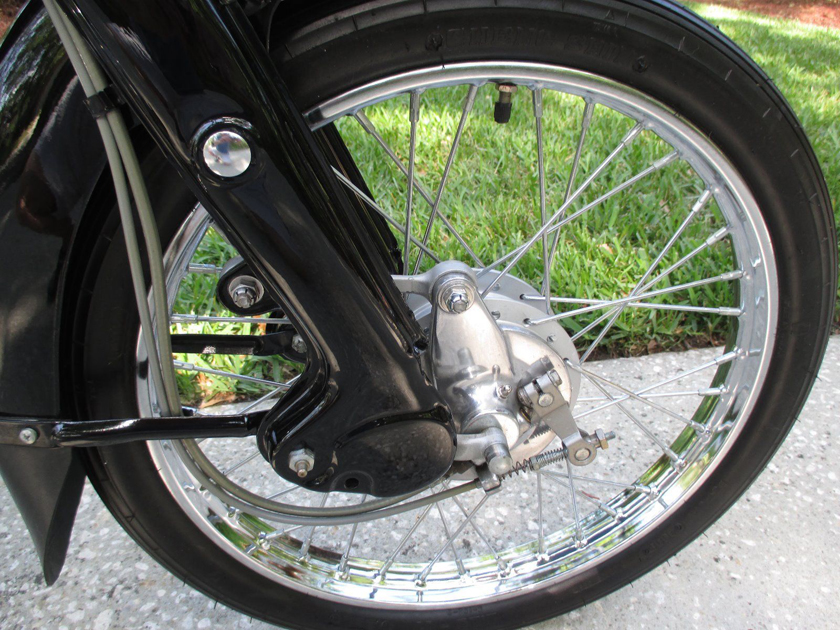 For the substantial sum of R95 I acquired my first bike, a glossy black and chrome Honda S50 in really decent nick! There was only one minor problem; I did not have a clue how to ride it! So when all else fails, read the instructions! In truth I didn’t just read the instructions, I absorbed them. In no time at all I understood the theory of every aspect of motorcycle riding and maintenance. Now for the practical. 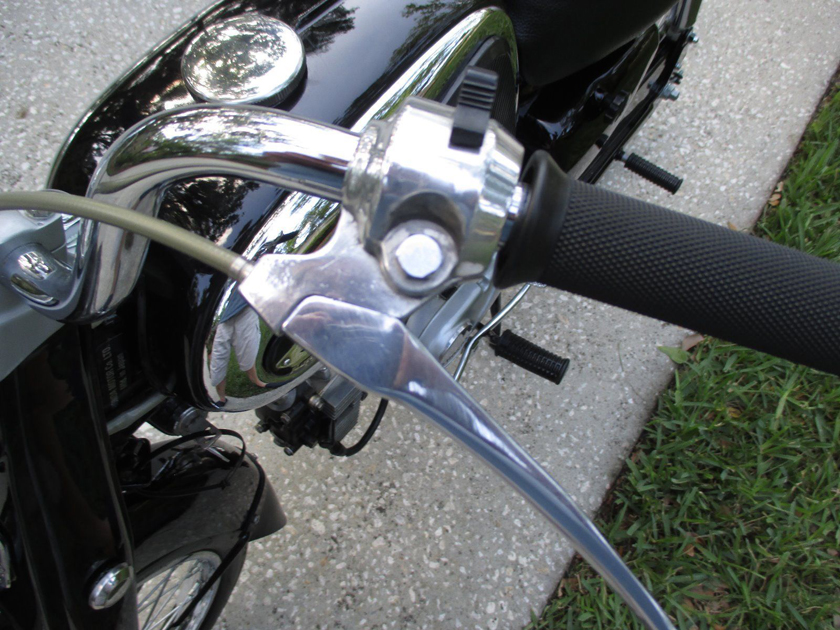 Let me just set the scene for you dear reader. We lived in a town house complex with an L shaped drive, which in total, was perhaps 150m long. Over the course of the next month, I clocked up over 100 kilometres in riding in the confines of the driveway. Thank heavens the tenants were all at work in the afternoons as I completed lap after endless lap, practising pull-aways, clutch control and first to second gear changes. A demonstration of my newly acquired skill eventually convinced my dad, who in turn had to convince my mom, that I would survive a foray onto public roads. I then started to plan my first foray onto the streets of unsuspecting Pretoria and what an entrance it would be! 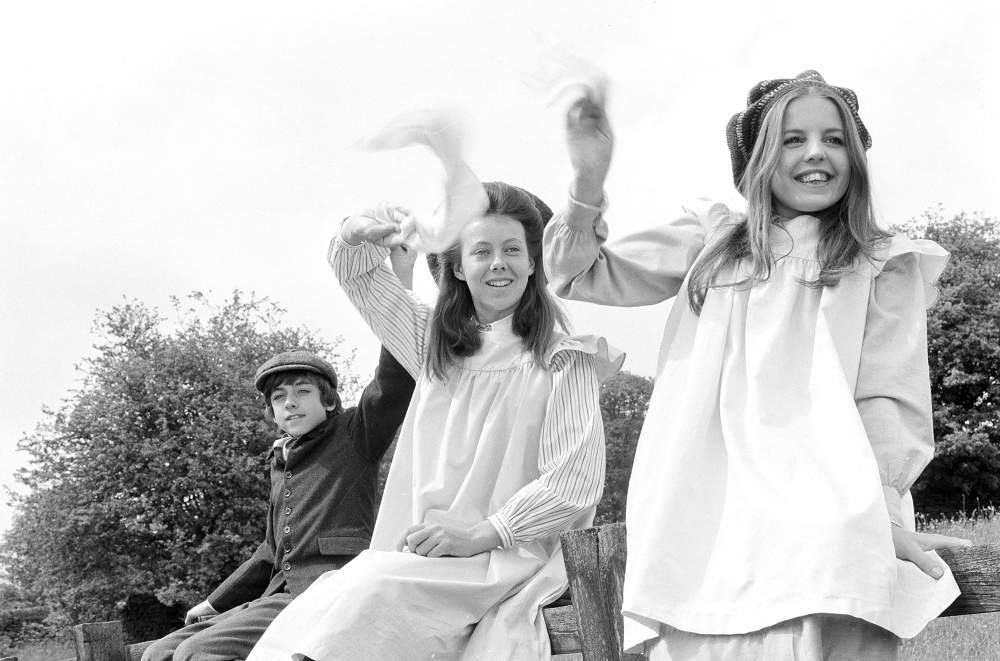 Friday evenings was “Youth club”. A whole bunch of guys, and much more importantly girls, would get together at the Methodist Church in Hatfield for a really fun time. As already alluded to, many childhood romances blossomed during this interaction with the opposite sex. Most of the kids attended Pretoria Boys High, and the sister school Girls High, so somewhat starved of interaction with the fairer sex, youth club was not something to be missed! Oh yes, the seeds of Christian faith were also sown during this carefree time. The reason I am telling you this is to explain my master plan.

If I got my timing right I could make my grand entrance on my S50. Polished for the occasion, while all the guys, no well actually girls, were standing outside chatting just before the start of the youth club. Just imagine, the Knight of the open road, roaring, well ok then, “putting” up on his shiny steed. Surely this would awaken some primal urge in the loins of every fair maiden viewing this virile specimen of masculinity on his handsome beast? Fact is, I thought, every other contender, arriving by bicycle, “pants in sock”, would instantly become an “also ran”. 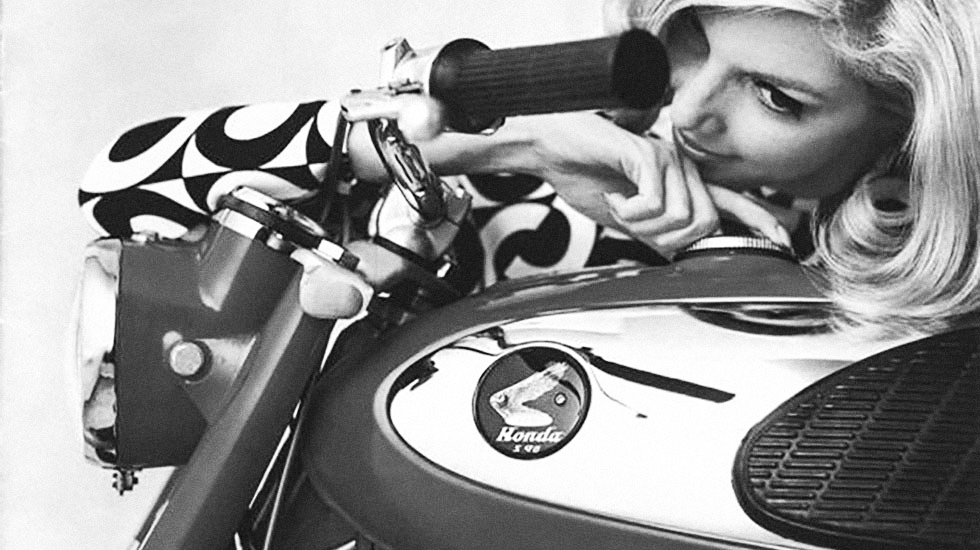 Let me set the scene. The church hall where youth club took place was on the right hand side of the road, about 100 metres from where I would swing into view as I negotiated a right hand corner. The way I imagined it, the bystanders would hear the unmistakable sound of an S50 at speed. Luckily it was a downhill to the right-hander, so speed was a possibility. Needless to the say, the baffle from the exhaust was long gone! To add to the aural assault, I would drop a gear or two before peeling into the turn. Oh imagine the sweet sound of that beast running on compression, popping and banging on the overrun! Once around the turn I would jump on the mainjet once again, accelerate to the church hall and brake to a stop. At this point I was sure that every nubile maiden, tongues gently moistening, slightly parted lips, hand sliding provocatively over pert breasts (or where breasts would be in a year or two), would flock to my side, clammering for my undivided attention. 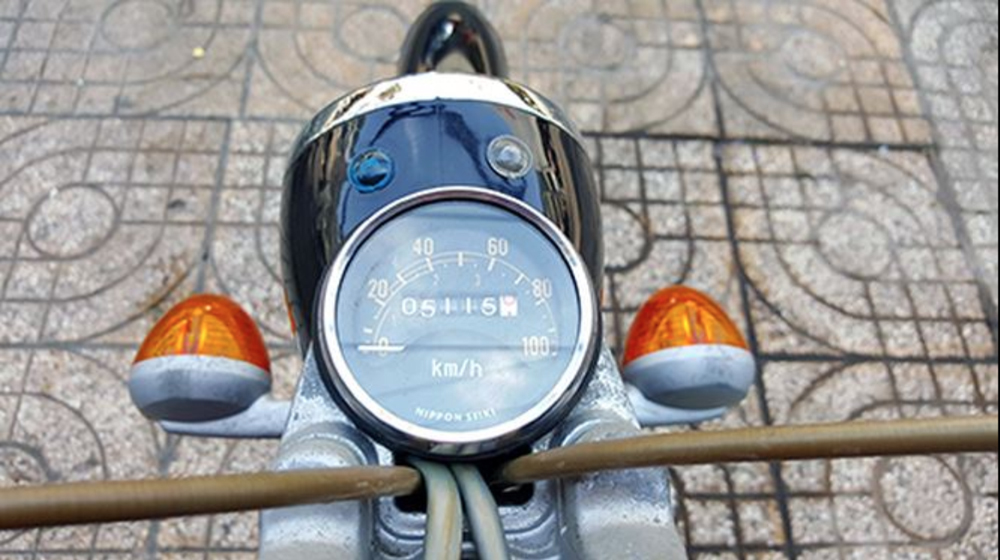 Well, it didn’t turn out quite like that. Up to this point of my riding experience, I had yet to hook third gear, let alone fourth. Suffice to say I was somewhat unnerved by the turn of speed when I gave the little Honda it’s head down Schoeman street. The speedo crept past 70kph and marched towards 80! Nothing I had ever experienced had prepared me for the adrenalin rush I was now feeling. My eyes were glued to the speedo needle with the odd glance to ensure that the road was clear. No problem, traffic was non-existent in the late 1960’s. Before I knew it, my turn was approaching at warp speed!

To slow for the turn I dropped from top gear into third and got hard on the brakes. What brakes? The puny little drums were simply no match for the hurtling Honda. With the intersection upon me, I started to turn in. At this point, with me putting tooth marks in my heart, I realized that I could not make the turn. Survival instinct kicked in and I started looking for an escape route. With everything happening way too fast, I picked the bike up straight and ran off the road on the outside of the turn. What I didn’t realize at that point was that the bellowing exhaust and pathetic attempt at braking had attracted the rapt attention of everyone standing outside youth club.

Back in the 60’s there was no pavement as such but rather a wide gravel verge from the road to the fence around the house on the corner. In fact a school buddy, Gary, lived in that particular property. Like many houses at that time there was a diamond mesh fence around the property, over which a hedge had grown. In a desperate attempt to stop I put my feet down and dragged them through the dust. This was to no avail. At a good 20 kays an hour, I smacked the huge hedge head on. 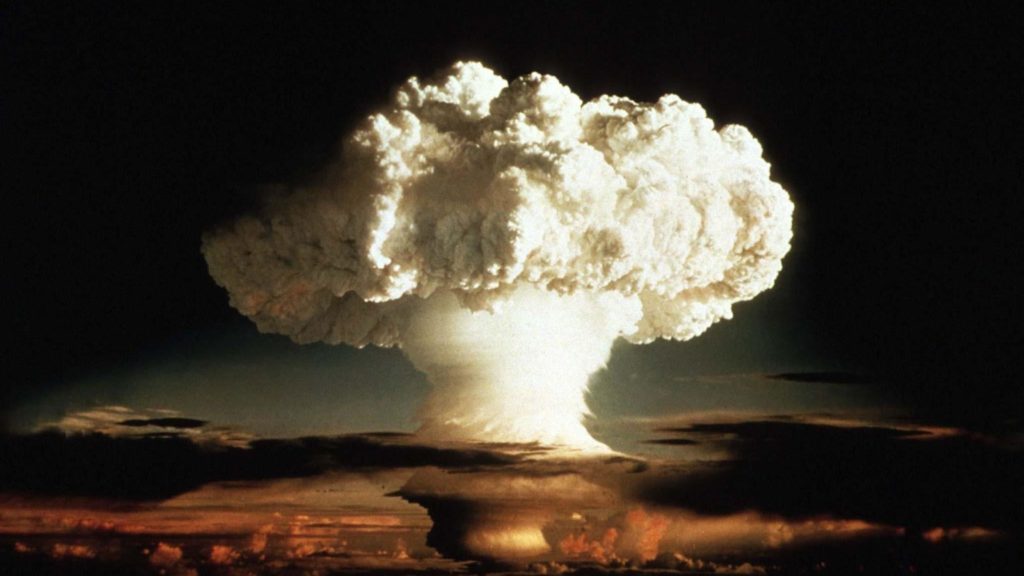 If any of you have seen photos of nuclear explosions you will be familiar with the mushroom cloud of the dust hurled skywards by the force of the explosion. Years of accumulated dust shot in all directions as the hedge swallowed me and the bike – WHOLE!!! Through the dust and scattered bush and twigs, all that bystanders could see was a dusty Honda tail light sticking out of a somewhat second hand hedge. 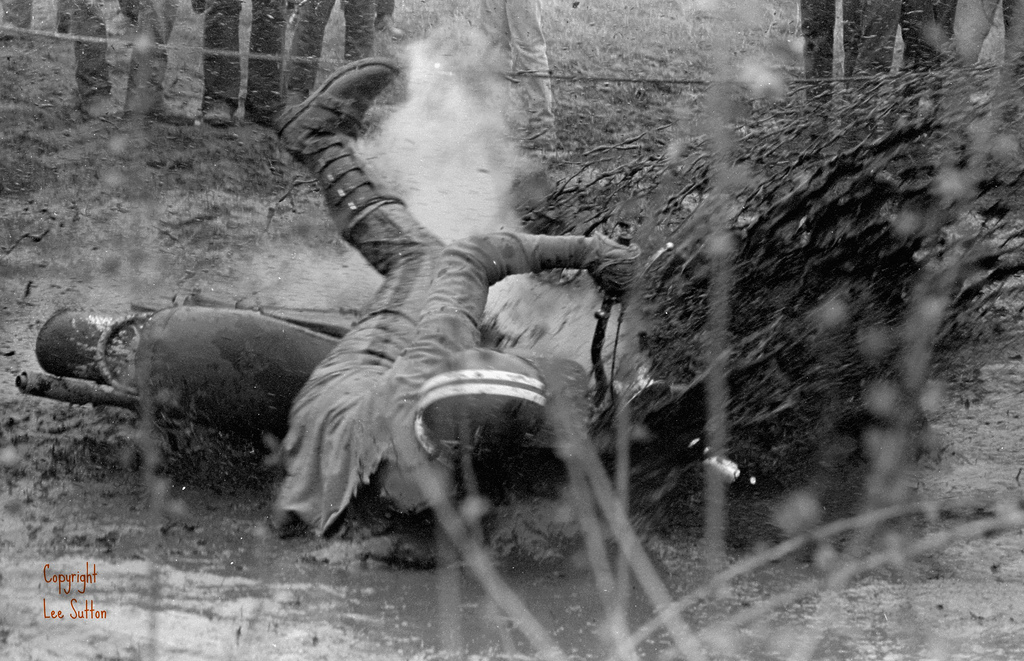 Folks let me tell you, it is impossible to extricate yourself from a hedge, covered in dust, scratched by twigs and after your clenched sphincter has tried its best to take a bite out of the saddle, with any kind of decorum! All that you could really make out was the whites of my eyes, which were so wide they would have looked at home on a giant eagle Owl. Apart from a shattered ego I was unhurt. The huge old hedge worked like a giant cushion, holding the bike and me upright. At least a compound fracture of the femur, and lots of blood, might have elicited some concern and sympathy from the aforementioned maidens, but it was not to be. Instead I had to wallow in misery as I witnessed the unbridled mirth of all and sundry.

Never has a learning curve been so steep! Those were heady days indeed. From “hero to zero” in a millisecond. Fact is, egos and bikes just don’t go!