There is not much competition anymore in the “big motard” segment for enthusiastic bikers seeking for a hooligan machine to ride! Alongside the existing Aprilia Dorsoduro 900, Ducati introduces a seriously revamped version of their Hypermotard. Bye-bye the 939, welcome the 950! ZA Bikers flew to the middle of the Atlantic Ocean to test ride the standard 950 version on the road and the SP version on track, near MasPalomas, in the Canary Islands…

“Am I wrong, or do they look the same?”. If you are emerging from a hangover like wake-up, differentiating the Ducati Hypermotard 939 from the 950 may be a bit difficult.

However, there are two unmistakeable features: this first being the main headlight, which now has two stylish integrated DRL LEDs.

Secondly, the exhaust is no longer on the side, it has emigrated upwards and now exits as two double short under-tail mufflers. Ducatista will be delighted to see that the shape of the exhaust pipes, after the tranquillisation chamber, has been designed exactly like on the iconic 916.

There are many more subtle differences between the two models. First are the ergonomics: big sections of the bike have been redesigned for a better man to machine connection. The handlebar is more open by 7°, so the new riding position gives you better control of the front end of the bike.

The frame has been redesigned in its mid-section, being narrower and also lighter by 1 kilogram, they have achieved this by using thinner tubes (from 3 to 2,5 mm), however only when there is no structural rigidity issues.

The seat is also narrower, and the inner leg curve measurement is now 53 mm, so despite the seat height being slightly intimidating at 870 mm (890 mm on the SP), because of the new cleverly designed seat (it’s the equivalent of a bike 12mm lower), this ensures that your feet can be placed firmly on the ground.

On the electronic side, the Hypermotard pair are controlled by the Bosch 6-axis IMU system, managing the traction control and wheelie control (8 levels each), and cornering ABS (3 levels). All of the above offer different packages according to the 3 different riding modes, which are as followed;

You can also create your own custom rider mode by using the left-hand switch-cube, which is very user-friendly to set up. The Hypermotard is fitted with a 4.3″ colour TFT display which is very sexy, as it’s nearly the same as the recent Panigale V4. All the usual information is there, and its all very easy to read.

The engine head-covers, made of magnesium, are responsible for a 1 kilogram weight reduction (add minus 500 grams from the new aluminium front fork inner tubes and less 600 grams from the new brake discs, and that all contributes to a total loss of 4 kg compared to the 939). The engine delivers 114 hp @ 9000 rpm and 96 Nm @ 7250 rpm. Those figures are rather similar to the previous version, but Ducati said they’ve been working a lot to strengthen the engine characteristics as well as making it more efficient, with 80% of the torque being available from 5000 rpm.

Of the two versions, the SP is differentiated by its tre-coliri paint scheme (the standard 950 only comes in red), its Öhlins, front and rear, fully adjustable suspension, the Marchesini forged wheels, some carbon parts (front mudguard, engine covers), removable pillion footpegs, as well as the up and down Quickshifter, which can be fitted as an option on the standard version. Pirelli Supercorsa SP also come as standard, replacing the Diablo Rosso 3 of the “plain Jane” version.

Canary Islands are a biker’s heaven!

We started our test ride with a 130 kilometres morning tour composed mainly by some very narrow – and scenic – mountain roads, over the Las Nieves Peak, reaching an altitude of 1939 metres. It’s sunny and quite warm from the first morning hours. You don’t need more than a few corners to realize that you don’t want to be, on that special moment, on any other bike.

The first thing you notice is a strong mid-range: on those roads, I was using mostly second and third gear, not so much the fourth, and the corner exit traction is very pleasant. Second point are the brakes: the front is as powerful as you can imagine, coming from a Brembo system with radial callipers, but due to the high suspension travel, the rear is not so efficient (a classic Ducati feature), and the ABS activated itself from the rear, a couple of times. Third is the handling: the bike is not a proper lightweight (although it’s not on the heavy side either, with 200 kilos with a full tank), but the engine is simply brilliant. Look to the apex, change directions while on full throttle, going left, right through twisties with no time to rest in between is simply great fun.

The Hypermotard 950 simply becomes a extension of yourself and you can ride at a great pace in an easy and effortless manner that is difficult to match. The only little trick comes from extremely sharp corners when the serious braking initial bite and the traditional Motard geometry brings a little instability from the front end. But you can stabilise with a soft touch of rear brake or also opening your leg towards the ground, to make it stylish and safe!

The last great surprise was the overall level of comfort: it can’t obviously compete against a Multistrada 1260, but although the seat does not look very thick, its foam is comfortable and the flat shape of the seat allows you to change position easily. The suspension works well too, with a progressive compression and a decent feel in the rebound. We returned an on-board computer 6,2 litres per hundred figure – at a rather sporty rhythm all morning long.

In the afternoon, we had a couple of track riding session on a SP version, with some optional racing footpegs, steering damper and the racing Termignoni exhaust, which brings the power to 120 hp… and exhaust note to a really thrilling deep and proper V-twin sound.

It took me nearly one session to get accustomed to the bike. The riding position is not exactly what one is used to when it comes to trying to go fast and get your knee down in corners. The bike is high and while being stiffer than the Marzocchi fork and Sachs shock of the standard version, the SP version’s full Öhlins equipment still generates a bit of movement under the hard braking moments.

Although the lean angle has been improved by 3° compared to the 939 SP (47° versus 44°, as it is also for the standard 950 version), you still need to place your boot on top of the footpeg to avoid unexpected scratching! That also says how easy it is to lean the bike only after a few corners. The MasPalomas racetrack is very special: it’s located on the edge of the Atlantic Ocean but its also quite dangerous as there is a chicane in the middle of the pit straight and, in and out, the walls are just so close! You get there full throttle in fourth gear, downshift to third, and as you’ve thrown the bike into the right hand corner, it’s time to get to the other side. And, this is not a joke, but there is a good bump on the lane.

The Hypermotard 950 SP changes lane without any effort, you can feel the bike slightly airborn over the bump as, being already flat out, the traction control gets into action for a tenth of a second and thereafter, the system does not cut the feeling of acceleration and the SP now goes up the hill towards the corner One. This one is very interesting, as you have to switch from a right hand to a left hand corner while braking hard and downshifting two gears. But everything gets so easy on the SP that you quickly feel very confident to push your braking point forward.

Lap after lap, once you find that you need to be mobile on the bike, more mobile than on a superbike, you’ll discover great fun, safety and confidence. It’s what all big supermotards are about and there is no doubt the Hypermotard 950 SP is now the class leader. 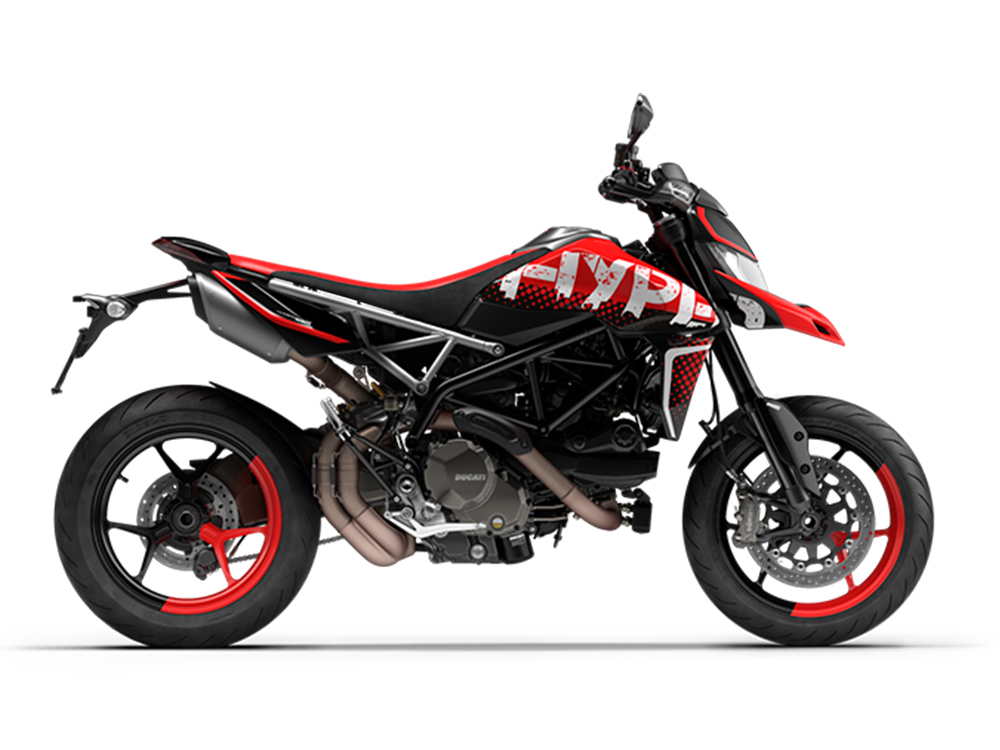 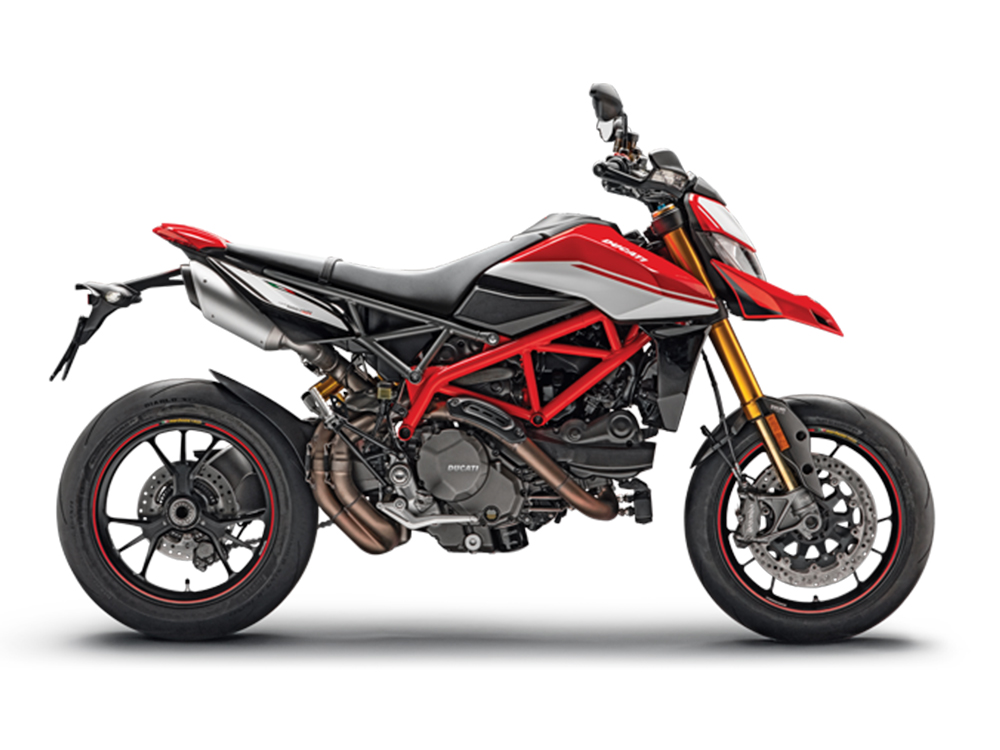 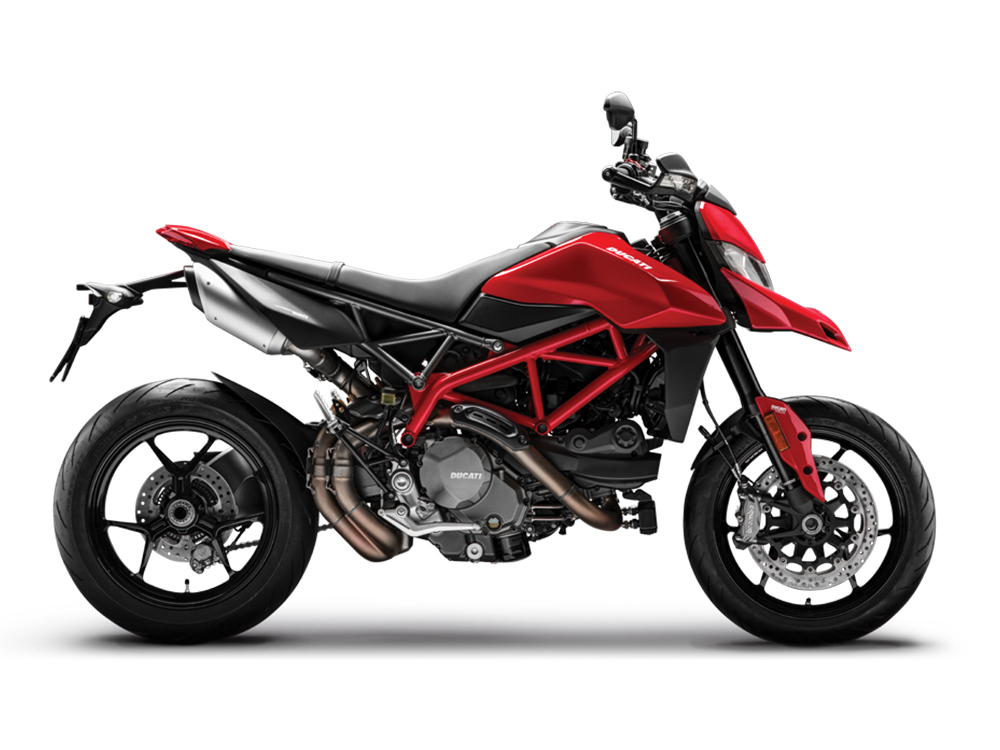