SYM understands that there are different strokes for different folks, so on that note, they have just launched their new Trail Blaze 200 which is the new sibling of the Blaze 200.

The Trail Blaze 200 is by far the most rugged model in SYM’s line up and what it offers, is not only value for money but versatility. The Blaze 200 was and still is one of the top commercial bikes in the South African delivery bike scene, due to the fact that it is very economical to run, impressively reliable and practical too.

So why build the Trail Blaze 200? Well SYM wanted to build a go-anywhere motorcycle that is not limited when it comes to routes and in South Africa, we’ve got loads of potholes and plenty of people staying way out on the gravel paths. Their answer to this was to take their proven, reliable Blaze 200 and dial up the versatility and fun factor which they certainly have achieved with the all-new Trail Blaze.

The all-new Trail Blaze 200 is equipped with tubed knobbly tyres, longer travel suspension, straight dirt bike inspired handlebars and an MX inspired mudguard. With these stonking upgrades added to the Blaze 200, I was keen to test the Trail Blaze on various terrains as well as commute daily for an entire month.

My daily commute to the office and back is approximately 30 km and on this journey, the Trail Blaze is faced with main road speeds, tight back road bends, and a gnarly Solomon Mahlangu uphill. Although little, the single-cylinder, 200cc, Carburetored power plant, pulls me along with all my luggage just fine. After all the upgrades the Trail Blaze still rides well on the road with the suspension soaking up all the bumps with ease. The tyres aren’t a big fan of the black stuff and they seem to get a bit squirrely through the bends. Whilst riding at highway speeds, I did experience a tiny bit of headshake but nothing too serious to put me off the overall package.

Compared to the standard Blaze 200, the handlebars provide way better control over the bike as well as a more natural riding position. Your bacon is greeted by a soft comfy seat that is ready for long-distance commutes and I can vouch for that after riding nearly 250 km on a single days ride.

Cockpit wise the Trail Blaze is as simple as it gets, two round analogue dials indicating speed, rpm, fuel and a manual adjuster for your trip. The switchgear is nice and bulky, making it easy to use with thick gloves and there’s a choke lever on the left. I actually never needed to use the choke once. The little Trail Blaze always starts first go.

The brake callipers are painted in a sporty red finish and they worked really well on the dirt. They could, however, be a little bit stronger for road use. The gearbox is nice and smooth and with a heel-toe shifter, gearing up was a breeze. As far as the motor goes, you’ve got a 170 cc power plant that boasts 12 hp and 12.2 Nm and with these figures, you can manage to reach a top speed of 110 km/h.

I found that the Trail Blaze cruises just fine at 90 km/h and on my sporty commutes I managed to get 374 km out of the 16L tank [23 km/L]. With a lighter wrist, 400 km + can be achieved but out here in GP we need to keep up with the traffic which means flat out for the most part.

One thing that I really like about the Trail Blaze 200 is the fact that riders still give you the nod. Meaning that the Trail Blaze with all its ruggedness doesn’t seem to appear too much like a delivery bike but rather an old school XR kind of scrambler.

Off the beaten path

With the word Trail being mentioned, it wouldn’t make any sense for me not to do some Trail Blazing. I will admit that I did go a little overboard with my off-road test by throwing some water crossings, berms, jumps and flat out sections into the mix. So how does the Trail Blaze cope off-road? The Trail Blaze feels at home off-road with the tyres suddenly making sense, the longer travel suspension coped with nature’s obstacles and the mudguard kept my vision focused on the trail whilst the mud was just flung aside.

The Trail Blaze and I had a blast together and even some of my buds were laughing at first whilst they were sitting on their EXC KTM Enduros on our ride out to Harties on the backroads. After seeing that the Trail Blaze could follow and go down the same routes, their respect for SYM’s off-roader offering was at a high.

I seem to have been bumping into a lot of friends and fellow riders on my Trail Blazing. I met up with Brian Cheyne on another one of SYM South Africa’s test bikes, the “NHT 125”. We went on a photo-ride on some B roads and Brian managed to capture the Trail Blaze in action.

I can see the Trail Blaze catching on as an affordable “go-anywhere” motorcycle, whether it’s used as a commercial motorcycle, a first motorcycle or as an inexpensive daily runabout. SYM has hit a six with the Trail Blaze 200 selling at R19 995 and I can’t wait to see more of them riding around with muddy wheels and big smiles all round.

I can honestly see myself going on a long-distance bike trip to Botswana on the Trail Blaze, maybe I should have a little chat with Dave Cilliers and Simon Morton who are always up for a challenge. 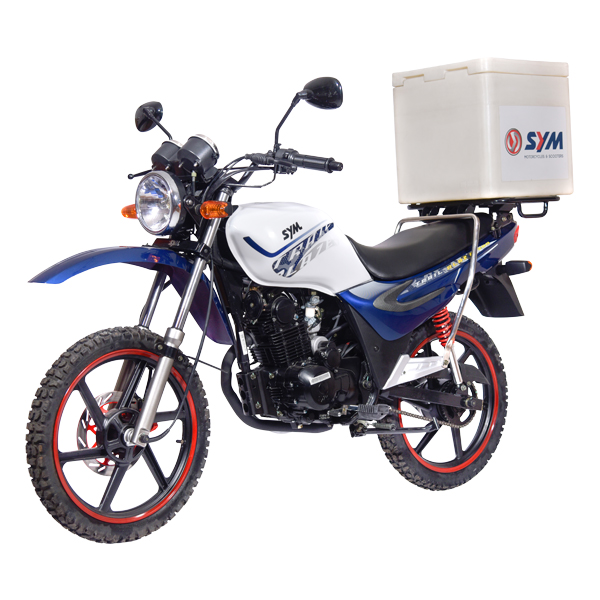