World of Motorcycles, importers of Ducati into South Africa, called for a gathering of the motorcycle media clans on Monday the 15th June, to make an announcement about changes to the status quo at Ducati. So what’s up? A new General Manager to oversee the Ducati operation in SA, that’s what. So who has Jos Matthysen, the entrepreneurial boss man at Ducati chosen to take the iconic Italian brand to new heights? Well, if the truth be known, we at ZA Bikers had a little bit of insider trading information about the new appointment, because it’s no other than our own Braam Smit.

Braam is well known in Gauteng motorcycle circles, especially to those who favour the blue and white roundel brand. Braam has been involved with the world-class BMW dealership, Bavarian motorcycles, for almost 20 years. I have personally known Braam for all of those years, in fact from when he joined Bruce Meyers’s dealership way back when. Braam has a passion for motorcycles that is apparent from the moment that you first meet him. The “Boxer Cup” was his and Bruce’s brainchild. A race series featuring BMW 1150 S’s would show that BMW’s were way more than figures on a spec sheet. The quirky boxer twins work! Braam proved that in no uncertain terms when he became the dominant force in Boxer Cup racing. I was privileged to write the race reports on what was a thrilling series. 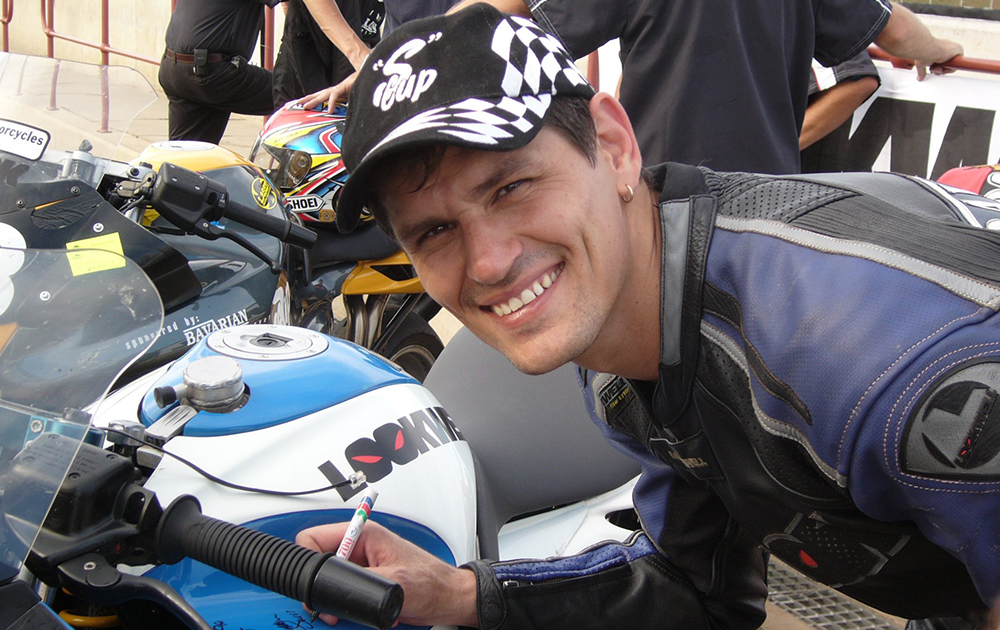 In recent years, Braam worked for Bavarian as a type of “freelance marketer”, whilst simultaneously pursuing his motorcycling passion, as well as writing about those adventures at ZA Bikers. One of his BMW clients was a certain Jos Matthysen. They built a friendship built on a common love of two wheels. Moving on a few years, Jos, a hugely successful IT entrepreneur, acquired Ducati from Toby Venter. Exposing his old BMW mate Braam to the iconic Italian brand had, with hindsight, a predictable outcome. Jos races in the monocle series, so when he suggested that Braam do an article around the track virtues of the new V4 Ducati’s, the writing was on the wall.

The track experience blew Braam’s mind. Here was an Italian brand, with the same sort of heritage as BMW, bringing a passion to motorcycling like only the Italians can. As Braam mentioned at the “gathering”, Ducati benefited massively by the involvement of Audi in the brand. Here was a brand that he could commit to in the same way that he helped to build BMW to a formidable force in Pretoria. The “functional” German influence, combined with the Italian passion resulted in the Ducati’s that we enjoy today. Bikes that exude passion, but with a new level of reliability and function hitherto not typically associated with the Italian brand.

Jos found himself stretched rather thin trying to juggle his various business interests, so, to cut a long story short, he convinced Braam to join him in taking Ducati to new heights in South Africa. Braam will assume the position of General Manager, managing the Pretoria and Cape Town Ducati operations. There are also plans to expand the World of Motorcycles operation to cater to the lucrative used motorcycle market. Braam clearly has a huge regard for Jos’s business flair, whilst Jos appreciates the years of motorcycle industry skill which Braam brings to the mix. A relationship born of mutual respect. Jos is keen on expanding Ducati’s racing exposure. He and Braam will dabble in BOTTS racing on a variety of Bologna bullets.

So there we have it. Combine commitment, skill and passion and chances are you will see a success story of note. At ZA Bikers we are certainly very sad to see Braam go, as we have enjoyed working with him “very-much” over the past few years, saying that, we are very happy for Braam and we wish him all the success in his new venture and feel confident that he, together with Jos, will take the brilliant Italian brand to new heights.

Know Your Oil Campaign powered by Motul Hits the Airwaves