The tank has two fewer litres but still has a usable, for a naked, 16 litres. This is good for around 250 k’s, by which time you will want a respite from the wind blast. Open road work is made easier with the standard cruise control. All of this technical “tour de force” is housed in an aggressive and purposeful looking package. Our test bike was orange (obviously) and a very deep blue combination which looked amazing as you will see from Bjorn’s pics. You can never mistake this bike for anything other than what it is.

The chassis has been totally revised. It still has the handsome single-sided swingarm, but it rides 5 mm higher in the frame where it, together with the new linkage mounted, significantly more supple rear shock resists “squatting” under acceleration. Speaking of shocks, the big Duke runs WP’s superb Apex suspension with a 48 mm front fork adjustable for preload as well as compression damping on the left leg and rebound on the right.

The frame uses the engine as a stressed member and KTM says it is three times stiffer than the previous frame. The swingarm is 15% stiffer too, so the huge power and torque can be kept aimed in the chosen direction of travel. Ok, well sort of!

The rear tyre has swollen from a 190 to a 200/55×17 to try and contain the prodigious power, with a 120/70×17 doing duty upfront. Six gears feed through a quickshifter assisted gearbox and aggressive downshifts are controlled by a slipper clutch. Like the 890, the big R has a Supermoto mode as part of a comprehensive electronics package, allowing the ABS to be disengaged on the rear wheel so that you can “back it into the corners” should you so wish. Traction control is adjustable through nine levels and there are five rider modes as standard, namely Rain, Street, Sport, Track and Performance (part of the “Track Package”). Wheelie control and cornering ABS complete the electronic aids.

The handlebar is slightly lower than on the previous model, putting you in a more aggressive stance, perfectly in keeping with the manic nature of the Beast. A five-inch TFT display gives you access to all the info that you could ever want and then some, with the “MY KTM Ride app” even allowing turn by turn navigation. This is slowly becoming the norm on top-end motorcycles these days. Unfortunately, the bike reverts settings back to base settings when the ignition is switched off, meaning that you need to reset everything to your liking each time you ride the bike. Come on KTM, give us a “dongle” to hold our preferred settings. Please!

So, how do you ride this bike?. Fast, that’s how! The Beast is an incredible bike to ride, the more upright riding position and wider bars give you a feeling of control assisted by the way more taut chassis. I found the “Street” mode most to my liking as it feeds the huge power in more progressively with the bike less likely to spin up the back wheel when heeled over. For me, point and shoot was the preferred method of riding the big R swiftly. Take advantage of the superb handling and the ease with which it turns to bank into the bend then as you exit the corner, pick it up and give it the beans.

You need to pinch tightly with your legs as the bike tries it’s phenomenal best to rip your arms off and you want to try (in vain) to keep a light touch on the bars. Wheelies are limited only by your ability. This kind of riding position allied to the power and torque on offer is wheelie city at its best. Whilst there is huge go available at all engine speeds courtesy of the two 650 cc slugs swinging around the crank it is at it’s best and smoothest from 4,500 rpm and up. At really low revs the engine is somewhat “thuddy” but smooths out sweetly as the revs rise.

The designer of the 1290 Duke, Herman Sporn, has done a magnificent job of smoothing all of its rough edges and building a superb all-round package. Despite its huge performance, it can be quite a versatile bike. I would not hesitate to tour on the Duke and track days are its natural playground. Commuting is a doddle given the bikes inherent agility and is reasonably comfortable, for a performance bike. Interestingly, Motorcycle News (MCN) in the UK, did a naked bike shootout featuring the new Ducati Streetfighter V4 S, KTM Super Duke R, Aprilia Tuono V4, supercharged Kawasaki ZH2 and Yamaha MT-10.

Brilliant bikes, one and all and dominated by the Ducati when it comes to specifications. Interestingly the tester, Michael Neeves, an extremely experienced and competent superbike rider and journalist rated the Super Duke R second to the Aprilia which won on it’s all-round “sweetness”. To edge the Ducati into second is testimony to how superb this bike is. Different riders value different aspects of the bike they choose to ride, so comparisons are always a little subjective but the fact is the KTM Super Duke R is quite simply a brilliant bike, which I am sure will bring huge joy to its owners and plant a smile on their faces which you will need surgery to remove. 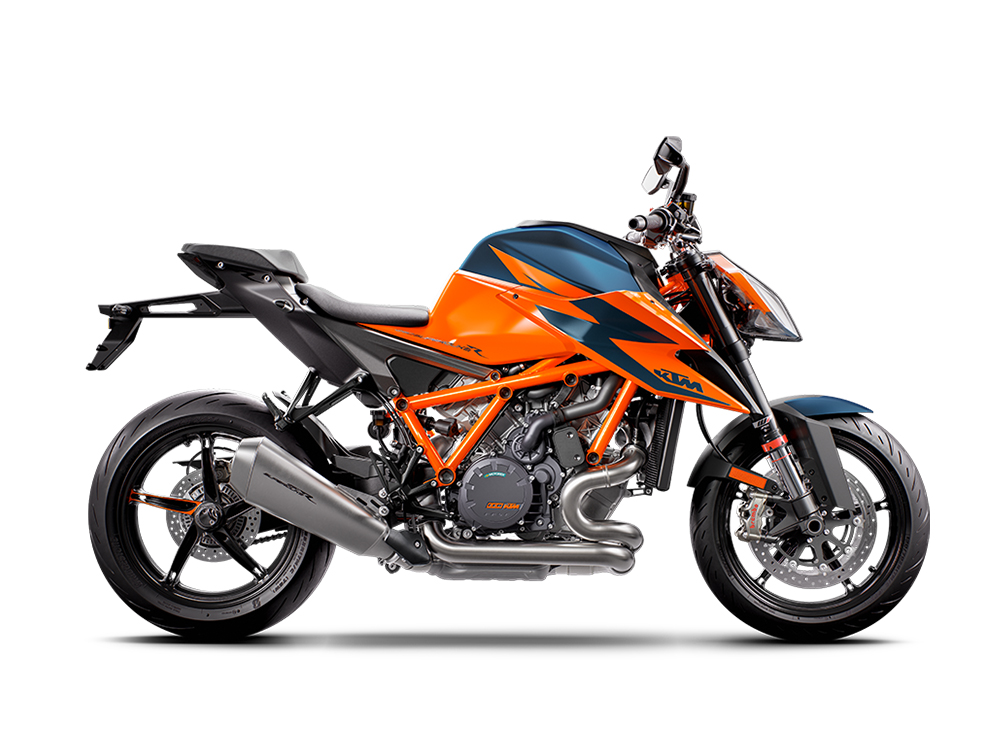