I took my Speed Twin into Triumph for its first service and arranged to have the use of their 1200cc Bobber Black for a couple of days. For those of you that know me, I am a child of the ’70s. One of the bikes that made a deep impression on me as a high school kid riding a Honda SS50 GT, was Triumph’s original Bonneville, or ‘Bonnie’, as it was affectionately known. Those were the days of ‘midnight movies’. The movie houses would, usually during school holidays, put on shows at midnight. It was always a big deal to take in one of these shows should your parents give their consent. Or not, for that matter…

The movie house that we frequented was just off Pretoria’s Church Square. From around 10.30 pm a bunch of youngsters would start to pull in (all the oldies thought we had lost the plot) and hang out, shooting the breeze in front of the movie theatre till midnight. In Pretoria, at that time there were a few cool guys with ‘big bikes’. There was Costa, with his K0 Honda Four 750, sporting a raised headlight and low clip-ons. The original four pipers were properly loud with their baffles removed and everyone heard Costa approaching as he revved the Honda down Pretorius street to the Capitol Theatre. The wonderful wail of the Honda four reverberated off the buildings in the city centre. Hot on his heels was another sound. This was the booming bellow of a big twin. Another Greek fellow, who I only ever knew as ‘Sotos’, would roll up on his ’69 Bonnie. This was the era before the wearing of helmets was law. It was also the era of seriously long hair. What we today refer to as a ‘mullet’.

Imagine for a moment the scene. Night-time mid-city. Kids mulling around in front of the movies. The wail of a high revving four accompanied by the boom of a big twin shatters the relative quiet of casual conversation. Two headlights approach at what seems like warp speed. The riders hop the pavement and kick out their side stands and cut the motors. Headbands keep their shoulder-length hair from their faces. Knowing that literally everyone is watching their every move, they hang around their bikes as the kids gather-round for a closer look at these leather lummie and jean-clad warriors on their steeds of steel.

Understand that big capacity bikes were few and far between in those days. Bikers were bad…period. Mothers locked away their daughters if they even suspected there were ‘Bikers’ around. The daughters, on the other hand, only wanted one thing and that was to hang with these bad dudes and be seen on the back of their awesome rides. Those were heady days indeed! Today we live in a way more sanitised world where big bikes are dime a dozen and hardly merit a second glance from the casual bystander. Enter a modern classic rendition of that legendary ‘Bonnie’, the Triumph Bonneville Bobber Black. This is quite literally a metal horse of another colour.

The visual presence of the Bobber Black is powerful. The ‘blackness’ of the bike gives it immediate impact, further accentuated by the fat 16-inch wheels back and front. The subtlety of aluminium accents here and there just make the bike ‘pop’ visually. Yeah, so I am an unashamed sucker for a retro-styled bike. Fully faired modern Superbikes are cool, even beautiful, to look at, but for me, it is the retros that scream style and class. Maybe it’s because they remind me of the simplicity of a World that was and is no more…….. Whatever.

As a journalist doing a review, it is incumbent on me to give my readers the specifications of the bike being reviewed, however in the case of the Bobber, it is so not what this bike is about. This bike is about how it makes you FEEL when you ride it. It is a feeling, an emotion, that wells up in you as you cruise down the road. At the heart of the black beast is the high torque version of Triumph’s 1200cc parallel-Twin. With a 97.6 mm x 80 mm oversquare bore and stroke, it is surprisingly willing to rev, especially for a motor that pumps out 106 Nm of torque right out of the basement, peaking at a mere 4000 rpm. Horsepower peaks at 76 Bhp @ 6100 rpm. The abundant torque allows Triumph to gear the Black really long.

At highway speed, it trundles along effortlessly with oodles in reserve. It is this relaxed, almost elastic nature in the way the bike delivers its power that contributes to its character. Ally this to a chilled riding position, where there is a slight (adjustable) reach to the almost drag-style, narrow and subtly shaped bars. Your legs are kicked out ahead of a conventional peg position but not in a forward control, almost straight-legged position. The closest bike to this that I have ridden is Harley’s Dyna Low Rider S. If you have watched Sons of Anarchy on Netflix, you will know exactly what I am getting at. The riding position is just so ‘right’ for the vibe of the bike.

Speaking vibes, there are none to speak of. The big twin chugs along without any fuss or bother. Give it the goods off the line and the Bobber really hops. The power and torque curves join together to give you a drag bike sensation with the low slung 690 mm seat height and slight stretch to the bars. ‘Bobbers’ got their name from rigid frame motorcycles of yesteryear with sprung, tractor style seats. The typically twin springs under the saddle, would bounce under the rider over rough terrain, causing them to bob up and down. Hence the name ‘Bobbers’.

Triumph achieves the rigid frame look by cleverly locating the back shock, a KYB unit, under the seat. The bike is a single-seater, so if you want pillion accommodation you may have to look at the Speedmaster. For me, I will have a Bobber and a second bike for two-up duty. Front forks are significantly beefier than the standard Bobber, (41 mm) going up to stout 47 mm chaps with 90 mm of travel. There is 77 mm of rear-wheel travel. This somewhat limited travel, essential to achieving the Bobber aesthetics, is helped by the air spring benefit of the fat 16-inch hoops which ride on black 32 spoke rims. The Black doubles up on front braking power over the standard Bobber by sporting two 310 mm discs with 2 pot Brembo calipers. A single 255 mm disc rides on the rear. The ABS endowed braking performance is thus obviously more than adequate.

Tiny touches that add to the overall enjoyment are typified by things like the instrumentation. The ‘Speedo’ lookalike is adjustable to stand more upright, or lay down more, with a simple mechanism like the front axle lock on a decent bicycle. The gauge is an LCD giving you all the info that you need, odo, 2x trips, digital rev counter, fuel consumption (current and average), traction control and fuel gauge. All accessed and set via ONE button. Brilliant. The Black has one-button cruise control too. Headlight performance is above par despite the relatively small proportions, being a LED and also incorporates Daytime Running Lights.

The bike is by no means light, weighing in at over 240 Kg’s fully fueled. It never feels heavy though. The weight generally benefits from the low slung stance of the bike. Even the shortest riders will get both feet flat at standstill. This inspires lots of confidence when moving around at low speed. As speeds rise, the long-wheelbase makes it the epitome of stability. Long sweeping bends are an absolute pleasure. The bike has more than adequate ground clearance for a ‘cruiser’. Typical of Triumph, the Bobber really handles well. The seamless glossy black tank with its classic Triumph logo is a thing of beauty and harks back to the classic Bonneville shape that all of bikingdom is familiar with. The mere 9-litre tank capacity still allows a range of over 200 k’s due to the bikes brilliant fuel economy. The long gearing and torque-rich motor combine to sip fuel at a paltry 4l/100 cruising at 130/140.

I rode the Bobber Black out into the country to take some photos. It was late in the day and the road was quiet as I traversed farmlands. The setting sun painted the sky a golden hue as it sank towards the horizon. The air started feeling crisp as the sun bid farewell to the day. I was overcome with one of those incredibly rare and special moments where time literally seemed caught in a bubble and I felt an inner glow of ‘oneness’ with this magnificent bike. It is so much more than the combination of its parts. It is one of those few bikes that connects with my soul. It is a feeling that transcends speed, comfort, handling or looks, but rather one of riding harmony that, on that day, in that place, was totally surreal.

On paper, the Bobber Black may not make too much sense. But before you throw the baby out with the bathwater, just ride it. Motorcycles, at the best of times, don’t always make sense, but if you connect with them, as I connected with this Bobber, then it may just be a match made in heaven. Starting from R192000, the Bonneville Bobber Black may just be the soul mate that you have been looking for. 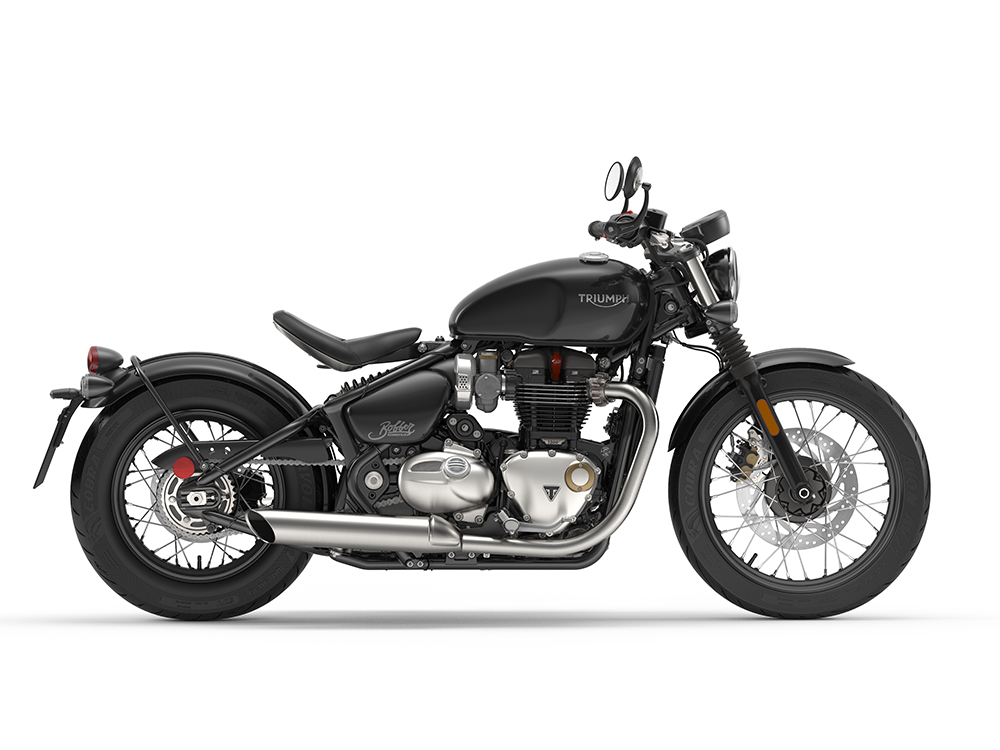