The first time I saw the R 18 ‘in the metal’ was at the press launch of the new range of BMW 900’s. Our lunch stop was in the Cradle, and there it was. Displayed in the dining area was the new R 18. We were able to touch and feel, but obviously not ride it. I introduced myself to Penny Sterley, the affable new boss lady of BMW Motorrad. Penny told me that she wanted to do something special for the SA launch of this new heritage model. I duly received an invite to the launch of the R 18 and got an inkling that this launch was indeed going to be really special.

The word that for me best sums up the looks of the R 18 is ‘elegant’. The venue for the launch, the Cape Dutch styled Lanzerac wine estate in Stellenbosch, built-in 1850, is the epitome of old-world elegance. Penny, you absolutely nailed this one!

At the top of the tree-lined drive to the estate, we were greeted by the sight of a row of R 18’s in all their elegant glory, with the backdrop of manicured lawns, splendid old oak trees and white Cape Dutch buildings.

The other icon was the design Grand Daddy of the R 18, the game-changing R50. I say game-changing, because, in the early 1960s, it introduced a new level of refinement, reliability and ease of maintenance hitherto not really packaged in any one motorcycle.

After a quick lunch on the patio, whilst ogling the array of R 18’s, it was time to kit up and experience the R 18’s on the magnificent Cape roads. Our route took us past Boschendal, through the tiny hamlet of Pniel and through the beautiful village of Franschhoek. Riding the Franschhoek pass down to the Theewaterskloof Dam allowed us to properly put the R 18 through its paces.

The R 18 is a bold move for BMW. Their previous stab at a cruiser was the R1200C (for Custom), which, in truth, was received with mixed results. I have never felt that the boxer motor lends itself to a cruiser bike build. It is so different from the look of a narrow V, or parallel twin recipe, which we are accustomed to in cruiser styled motorcycles. The R1200C was a ‘cruiser style’ bike from BMW with quirky styling that just never really worked. It worked from a riding perspective, where it was functionally superior to cruisers of the day, but vitally, it looked wrong. The R 18 fixes all that because its styling harks back to the iconic R50. As such, it has to have a boxer motor! Where the R1200C was wrong, the R 18 is just so right. And what a boxer motor the R 18 has!

It displaces 1802 cc’s, or 110 cubic inches, in Americanese. That makes it the biggest boxer motor ever built. Two horizontally opposed, 901 cc pistons, tugging on a communal crankshaft, create some unique engine dynamics. One of these is immediately apparent when you fire it up. The torque reaction on start-up can almost be described as violent. The bike lurches to the left and then settles down to a big piston rocking idle. It’s just so classically BMW.

When you drop it into gear and ease out the slightly hefty, dry, single-plate clutch, the R 18 rolls off on a wave of torque. 158 Nm @ 3000 rpm, to be precise. Horsepower is a decent 90 hp, but it is the torque that defines the power characteristics of the bike. Peak power is at 4,750 rpm, but there is simply no need to rev it up. In fact, it is unpleasant to rev the bike as it gets hammer drill vibey at high revs. The 158 Newtons let you short shift and drop the motor back into the ocean of torque. It surges through the gears with serious get up and go. I soon learnt to keep it between idle and 3,500 rpm, where the motor is reasonably smooth, allowing the R 18 to lope along effortlessly.

The six-speed box allows you to really get a hurry up. It has three riding modes. Get this, Rain, Roll and Rock. Rain is down on power, like you pulled a plug cap, Road is so so and Rock is what you just leave the bike in. It’s that simple.

The riding position is typical cruiser, with the exception of the footpegs, which are not in the typical ‘forward control’ location, but in deference to the jutting cylinder heads, in more of a central location. I found the R 18 quite comfy at speeds more appropriate to ‘cruising’. Spirited riding through the twisties was fun within the constraints of the typically cruiser style limited ground clearance. Riding decent lines allows surprisingly rapid progress. You always have to bear in mind this is a slow steering, heavy (345 kg) motorcycle. As is the case with so many big bikes these days, the R 18 feels significantly lighter when it gets rolling.

The low stance and centre of gravity, (thanks to the boxer motor) help in this regard. Unlike a couple of the guys on our rotation, I found the firm seat supportive and comfortable during our three-hour rides. The typically short cruiser suspension travel can be a bit overwhelmed on a bumpy road. The ride is generally firm and controlled with the bike displaying impressive stability at speed.

As you will see from the accompanying photos, the fit and finish of the bike are of the highest standard. BMW have a comprehensive accessories catalogue which allows various styling options. This ‘First Edition’ model can be converted from a single to twin-seat as well as a Bobber option. In fact, it is the Bobber option that most closely resembles its heritage R50. The frame looks rigid, but on closer inspection, the rear swingarm rides on a hidden monoshock behind the motor.

The burly front forks are right side up and hidden behind shrouds. For me, the jury is out as to the styling of the ‘fishtail’ exhausts. Typically pipes are one of the first things that owners modify or replace, often to liberate more sound, so this is no biggie. Euro five regulations are a bee with an itch, causing current bikes to sound more like appliances than motorcycles. I would love to hear the big boxer liberated. I think its 1800 cc throaty rumble would be addictive.

Cruisers are an acquired taste which can become really addictive. They take the ego out of motorcycling, which is a really good thing. What they do, is give you a blank canvas on which to express yourself. The heritage models, like Bee Emm’s R 18, tug on the heartstrings in a way that takes us back to a world that was way simpler and straightforward. A world that moved at a slower, less frenetic pace. On day two we rode more splendid Cape roads. The super scenic Bains Kloof, Du Toits Kloof and Helshoogte. For me, it was riding the Rooiels road in the late afternoon of the first day, with the setting sun to our left and a crisp breeze off the sea playing over us as we cruised through the curves that was quite surreal.

I bumped into a familiar face and friend of ours, Mercia Jansen at the BMW R 18 launch and here is what she had to say about the Bavarian beauty…

Mercia Jansen (Motul Area Manager for Southern and Eastern Africa):
“The BMW R 18 is a beast and she makes it very clear the moment you start her up. You have to hold on tight and keep your feet firmly planted on the ground. I took about 3 videos of her idling. The handlebar does quite a dance and at the 950 rpm idle speed, its music to the ears and makes you feel alive. She is big and she is heavy and that takes some getting used to. But once you find those beautiful sweeping roads she is in her element. Despite the size and weight once underway I found her very easy to steer which was a standout for me.

She goes where you want her to go, without too much effort. You have to appreciate this bike for what it is. Cruising through Slanghoek and over Du Toitskloof pass was magic and what this bike was designed for. If you are looking for loads of torque you won’t be disappointed. I found the riding position and seat (contrary to some other opinions) very comfortable”.

The reassuring throb of the big boxer spoke volumes as to why people love cruisers. Riding pleasure without pressure. This pleasure comes at a considerable premium. The top-spec First Edition R 18 is going to set you back around R364 000. For that, you get a special bike. It may not be everyone’s cruiser of choice, but if you want a bike that epitomises the incredible roots from which BMW has grown into the motorcycle giant that it is today. If this is something that strikes a chord with you, then it will be the Berlin built Bavarian beast that tops your cruiser list. 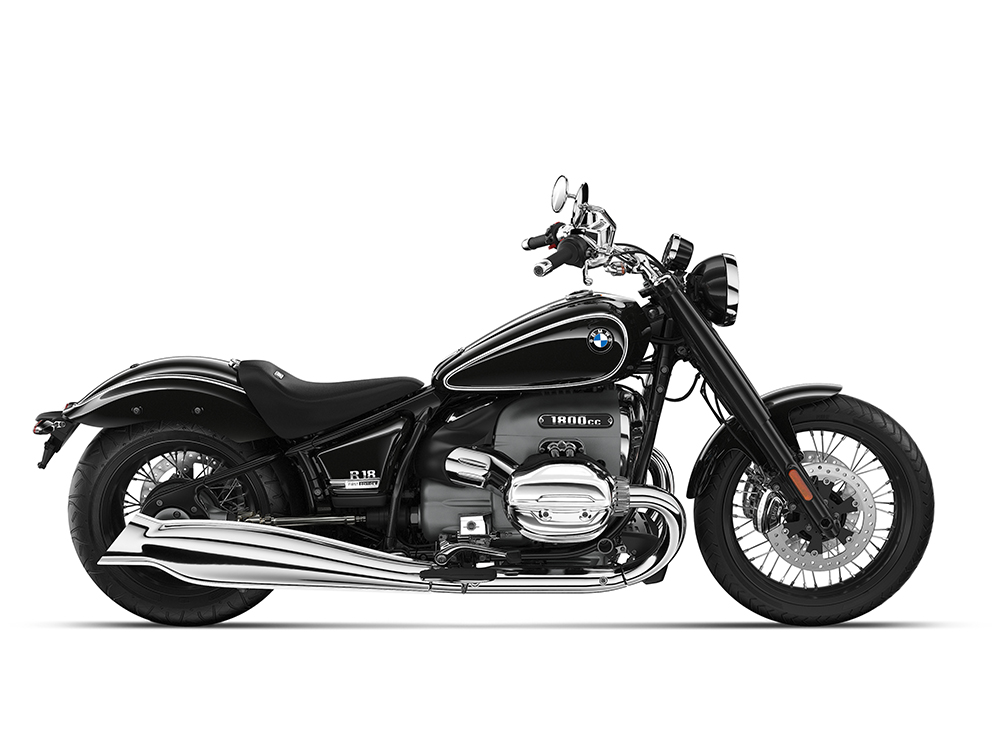