It’s no secret that we’re big fans of Triumph’s modern classics around here. The British marque has nailed the formula for combining yesterday’s looks with today’s performance, and has more modern classics in their catalogue than any other style of bike.

So for 2021, Triumph has pushed the Bonneville line forward with a handful of subtle updates, rather than a full redesign. At a glance, the 2021 T120, T100, Street Twin, Speedmaster and Bobber don’t look a whole lot different from before—but under the hood, they’re sporting mild performance boosts and weight savings.

For starters, both of Triumph’s 1,200 cc and 900 cc parallel twins are now Euro 5 compliant, without sacrificing output. The 1,200 cc unit in the T120, T120 Black, Speedmaster and Bobber makes the same power and torque as before, delivering 105 Nm of torque at 3,500 rpm, and 80 PS at 6,550 rpm. But the motor is lighter and more responsive than before, thanks to a lighter crankshaft, and an optimised clutch and balancer shaft.

The T120 and T120 Black get a handling boost via a seven kilo weight saving, and 18F/17R aluminium wheel rims that reduce unsprung weight. The front brake’s been upgraded to a higher spec Brembo, ABS, traction control and two rider modes are still standard issue, and the T120 now has cruise control, too.

The overall look of the T120 hasn’t changed much, barring small details like the speedo and tach faces and the tank badge. As per the norm, the T120 features chrome finishes and comes in three colours, while the T120 Black has blacked-out finishes, and comes in either matt or gloss black. 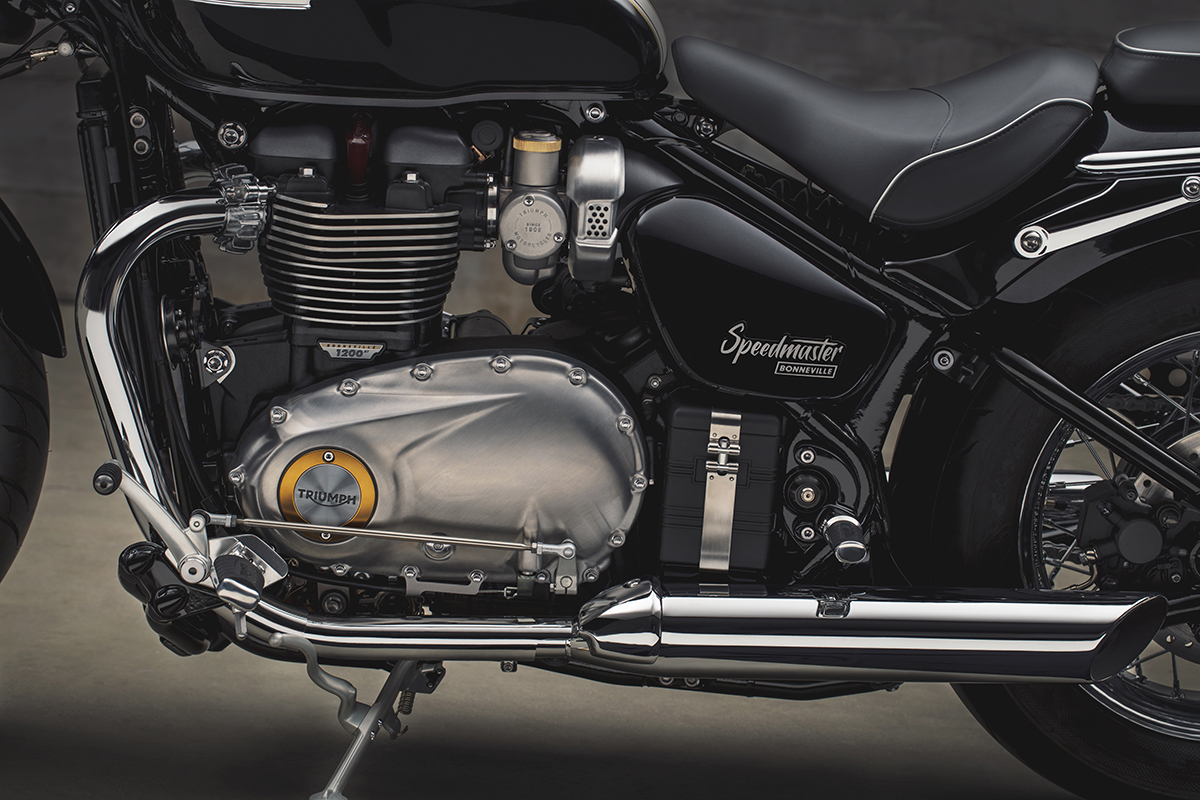 Triumph have improved the Speedmaster’s comfort too. Its low (705 mm) now includes a lumbar support pad, and the pillion pad has a much-needed 11 mm more foam thickness. The pillion seat can also be easily removed to convert the Speedmaster to a solo seat setup.

Like the T120, the Speedmaster gets subtle design tweaks to parts like the speedo, along with LED lighting and new paint schemes: plain black, white and black, and a ‘Red Hopper’ candy paint scheme.

The popular Bobber hasn’t gone untouched either. It’s been given blacked-out finishes, and the chunky 16” front wheel and 47 mm forks from the Bobber Black, leading us to believe that Triumph have now rolled both models into one. (It’s a smart move too, given how similar those two models are.)

There’s a total weight saving of four kilos on the T100, plus it gets new cartridge forks and higher spec twin Brembo front brakes to improve handling. ABS and switchable traction control are standard issue, and like most of the range, the speedo’s had its design fettled.

The Street Twin makes its numbers ever so slightly differently: 65 PS at 7,500 rpm, and 80Nm at 3,800 rpm. For 2021, it has new cast wheels, a more comfortable bench seat (10 mm thicker with better foam), tweaks to its bodywork, and brushed aluminium headlight brackets.

The Street Twin’s colours haven’t changed much—except that it’s now available in blue. And there’s a special ‘Gold Line’ limited edition version too, of which only 1000 will be sold worldwide.

The Gold Line edition debuts with a black colour scheme, complemented by gold striping that’s been done by hand in Triumph’s paint shop. It also has its own limited edition badging, and comes with a certificate of authenticity—but really it’s just a regular Street Twin that’s had some gold sprinkled on it.

Triumph’s 2021 Bonneville range doesn’t come with any major revelations, and that’s OK: most of these modern classics worked well enough out the box already. We’re expecting these changes to ripple through the rest of the range though. Triumph has promised updates to the Street Scrambler and Scrambler 1200 in April, so watch this space.

Find out more at: www.triumph-motorcycles.co.za

Old Railway Line Adventure: A Day Out with Triumph Pretoria