Small capacity motorcycles are usually either affordable or good looking, but seldom both. That’s where the Taiwanese manufacturer SYM comes in. We’ve been massively impressed with their balance of cost and style so far, and the new SYM NHX 125 roadster looks to continue that trend.

The NHX 125 shares the same bones as its crossover sibling, the NHT 125—a bike that gave us a lot to rave about at just R29,000. The NHX is brand new and pricing has yet to be confirmed, but if it’s in the same ballpark, it’ll be hard to argue with.

Although they use the same motor, LCD display and combined braking system, the NHX sheds the NHT’s adventure bike styling for a roadster look and feel. It gets lightweight 17” alloy rims, sportier ergonomics and a minimalistic single headlight design.

Overall, it’s a more attractive bike. It looks dynamic without looking completely like a hooligan machine, but doesn’t drift towards the beige side of yawnsville either. The NHX should appeal to younger riders with its strikingly sharp lines, cool graphics, full LED lighting and usable tech.

Our test bike was dressed in a very striking red and grey livery, but to be honest, I prefer the blue and white option it comes in. It gets some faux carbon touches too, which add a pseudo-premium touch.

The big surprise for me, is that this 125 has a full complement of LED lights—something my 2016 Yamaha MT-09 doesn’t even have. I really dig the headlight on the NHX, and the little ‘carbon’ flairs on either side of the headlight look pretty cool too. It also worked extremely well on my late commutes, but the clicking flickers can be annoying at a stop (they’re a good reminder for beginners though).

Around the tank are sharp mini fairings with little air scoops to finish off the front of the bike’s design. Another nice touch from SYM is the swingarm-mounted license plate bracket, which cleans up the short tail section.

The NHX also has a handy centre-stand and tubeless wheels, if you peer under the tail, you’ll find a pair of cut-outs that act as grab handles for getting it on and off the stand, adding practicality without visual bulk.

So it’s a 125 that looks the part and sounds the part—but does the NHX make as much sense as its proven sibling, the NHT? I spent a month, and a few hundred kilometres on it, to reach a verdict.

You’ll find the same 124.1 cc single-cylinder fuel-injected motor from the NHT in the NHX, delivering 10 hp @ 8,500 rpm and 9.5 Nm @ 6,500 rpm. With 5 kilos less and sportier rubber, the NHX accelerated slightly better and used less fuel on the same daily commute as the NHT. Although a little better, the NHX still needs a lot of revs to get off the line, and unfortunately, high revs (6,000 rpm and higher) need to be maintained to keep it going up any sort of incline.

The motor pulls well, especially in third and fourth, which is where you need it the most. The NHX cruises comfortably at 90 km/h at around 7,000 rpm, leaving you with another 3,000 rpm before you max out at 116 km/h. Vibration is surprisingly low for a single, and SYM have even fitted a peppy sounding exhaust.

On the NHX, you get a very modish LCD display that’s laid out well and brightly backlit. From a trip meter and odometer, to fuel and battery levels and even a gear indicator, this 125 has got it all.

Generally, I found the cockpit a very comfy place to be. The leaned forward riding position connects you with the front wheel, and the one-piece seat is very comfortable, although, a bit short for pillions. A big plus point is its low seat height at 780 mm, vs the NHT’s 818 mm, which makes the NHX more accommodating for a variety of riders.

The NHX offers a sporty ride, meaning you can enjoy some spirited cornering with utter confidence. I’ve ridden a few 125 cc bikes and many of them just struggle when it comes to balance and weight distribution—making the bike either super flighty, or seriously heavy to steer. The NHX feels perfectly balanced to me.

When it comes to slowing down, the NHX has a schweet-looking CBS (combined braking system) equipped with wavy discs up front and at the rear. This is really nice while riding on the road, because you can pretty much stop using your front brake lever altogether and just modulate your braking with your foot. I did notice a delay when using both the hand and foot brake together, but other than that gripe, the brakes work well.

The NHX’s strong point is its great fuel efficiency, and the range it gets from its 11-litre tank. I managed to get an average of 31.6 km/L in hilly Pretoria—so with a quick calculation, you would get a range of 347 km.

Here’s a fun fact; the average teenager drinks 80-litres of sugary drinks a year. Let’s round that off at 7-litres a month, at R22 for a 2-litre soft drink, that’s R154 a month on sugary drinks, versus R176 for a tank of fuel that can take you far and wide. My advice, stop drinking crap and buy a bike instead!

Conclusion; the SYM NHX 125 is a great around town commuter bike for those who want to get an early start into motorcycling, or for those looking for an affordable daily runner. In all honestly, you’d be hard-pressed to find a better starter bike—and if the NHX costs anywhere near the NHT’s R29,000, in my mind, it’s a done deal. 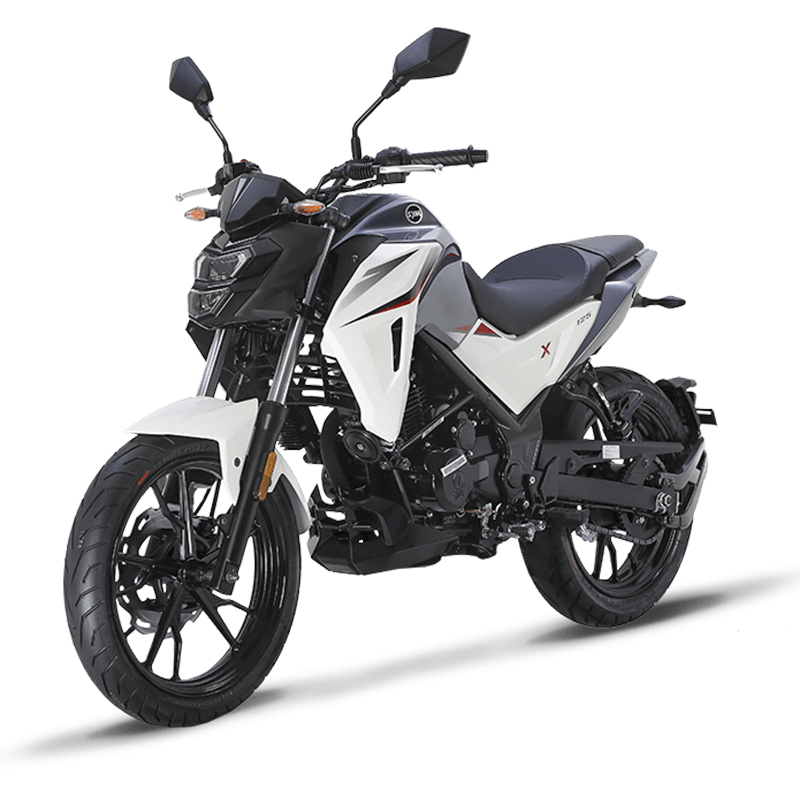