After nearly 4 months of race-less weekends, the wait was finally over. The 2021 MotoGP season kicked off this weekend in windy and dusty Qatar, with some new track records and three killer races. So, on with the GP supporter apparel, a quick stretch of the vocal cords and here the race weekend begins.

Saturday saw Darryn Binder set Losail alight during qualifying, with new Moto3 Petronas Sprinta Racing leathers and a newly mastered Honda NSF250RW. Darryn made mincemeat of Q1 and soon carried the same pace into Q2, where he broke the track record twice, and claimed pole, with a 2’04.075 lap.

Sundays Sunset in Losail, saw the lining up of 28 roaring Moto3 bikes and the first of three races. With every four-stroke single-cylinder hitting 14,000 rpm, the lights went out. Darryn launched off the line and led into turn one, where he maintained his lead throughout the opening lap.

The first couple of laps saw some dogfights out front, where bumping and having to ride on a bit of grass became the norm—Darryn blindly nudging Sergio Garcia onto the grass at 200 km/h. Lap by lap, the slipstream effect on the start-finish, caused the lead to change hands almost every lap. Darryn battled hard to be upfront throughout the race, and began plotting his final laps.

Darryn found himself a few bike lengths apart from the leading pair leaning into turn 16, but gave it his all on the final drag to the line. At the chequered flag young Binder claimed his first podium in Petronas Sprinta Racing colours after crossing the line in third. What a banger! Super awesome to see Darryn performing so well, right off the bat and already making a name for himself within the Moto3 class.

DB: “It was a difficult race with the wind, which was a lot stronger than I expected. Every time I got to the front I just felt like I was waiting for someone to come past, because if you were leading when you got to the main straight it was crazy. If you were second or third you could get a really good draft into the last corner. I rolled on a bit too much in the final corner and got caught by the wind, it was insane how much slower I was when the wind got me. To be on the podium in the first race of the season was exactly what I needed though. What a great first weekend with the team and the Honda, I’m super happy and can’t thank the team enough!”

Brad Binder had a different build-up to race day, with cold track temperatures and gusts of wind causing stability issues on the KTM during qualifying. Brad wasn’t the only KTM rider battling, Danilo Petrucci, Iker Lecuona and Miguel Oliveira all found themselves in Q1, with the same battle on their hands. At the end of Q1, Brad had to consolidate a 19th starting position for Sunday’s race.

With the sun gone and with all 3600 floodlights turn on at the Losail circuit, it was MotoGP time. It was four Bologna bullets that took launching into a whole new level and into turn one. However, behind the scenes, Brad was charging from 19th and quickly making inroads towards the mid-pack battles.

Brad soon got into a group battle with Pol Espargaro, Stefan Bradl, Miguel Oliveira and Valentino Rossi. Binder was beginning to making his way up towards the top ten, until he started having front tyre grip problems, making him slow his pace down drastically. After having a few scraps with Rossi, Brad soon settled behind his teammate Miguel and crossed the line in 14th.

Overall, I think Brad rode well, considering everything he had to ride around, and I think we are seeing a more mature rider this year. Brad stuck it out and brought the bike home in one piece, while scoring his first and much needed MotoGP points for the 2021 season.

BB: “It’s good to have the first race of the season under our belts but we didn’t finish close to where we wanted. For sure the whole team and I expected much more. We have to accept reality and there is work to be done at this circuit. In the first part of the race I thought we could be competitive but at half race distance, I completely finished my front tyre. It was a case of either bring the bike home safely at the pace I was doing or lose the front. It was difficult but now we have data from the first race and we can move on from here.”

Drama, scintillating racing, and ridiculously tight finishes. The best thing? We get to do it all over again next weekend at the Losail International Circuit. 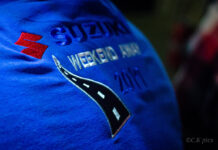 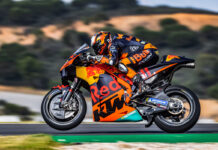