This is not the first Triumph to wear the Trident name. In 1969, Honda stunned the world with its game-changing CB 750 Four. Sporting a four-cylinder, single overhead cam engine and the first disc brake ever seen on a production motorcycle, it was destined to change the face of motorcycling forever. Birmingham Small Arms (BSA), who owned Triumph at the time, actually beat Honda to the multi-cylinder punch when they released two three-cylinder overhead valve 750 cc motorcycles at the end of 1968. The turquoise Triumph Trident and the red BSA Rocket Three. ‘Trident’, a three-pronged fork, obviously alluded to the three-cylinder engine in the new Triumph, whilst ‘Rocket Three’ was destined to get hung on Triumph’s power cruiser in years to come.

The BSA element within the Triumph/BSA coalition, insisted on their Rocket being fundamentally different to the Triumph, so slanted the cylinders 12 degrees forward, as compared to the Trident and changed the frame. This was really dumb, given the growing financial woes of the British manufacturer, where common engineering made much more sense. Let’s focus on the Trident, as it is the forefather of the bike that we are going to talk about. The three-cylinder motor produced 58 hp, propelling the bike to a 190 kph top end, a smidgen faster than the new Honda Four. The styling was different to the traditional Bonneville look that characterised Triumph’s of the day. A slab-sided tank and side covers framed the three-cylinder pushrod motor, which was underlined by the weirdest three-into-two exhaust that the world had ever seen. The flattish oval silencers terminated in three little ray-gun type outlet tubes. Weird as they looked, they worked well.

Faster and better handling than the Honda four, it was no match for the Honda’s immaculate fit, finish and general build integrity. Where the Honda’s engine was wonderfully oil-tight, the Triumph had a sponge lined sump tray to catch the oil that seeped from the engine. The writing was clearly on the wall for the British manufacturer. I have a lasting memory, however, of one John Surmon, riding his Triumph Trident from Jo’burg, to the Buffalo Rally, held in Bathurst, in the early Seventies, in record time. One day, I mused, I too would undertake such epic rides. The Trident got Quasi Bonneville styling to try and break into the American market, but it was too little, too late and the last of 28,480 triples was built in 1975.

Back to the future. I was intrigued to have the opportunity, in another time and hugely successful age for Triumph motorcycles, to ride and review the modern motorcycle which carries the legendary Trident name. The new Trident sports a 660 cc motor loosely based on the iconic 675 Street Triple mill. 80 hp sounds tame considering the 125 hp of the ‘old’ 675, however, it produces the power where it matters, more in the mid-range, with gearing that gives proper go in real-world riding.

A feather-light 189 kg’s gives it a decent power to weight ratio, propelling the Trident to a 210 kph top end. The milder tune requires less frenetic servicing, with service intervals of every 16,000 kays. A vital consideration in these cash strapped days. A huge part of the appeal of the Trident is in its funky packaging.

The styling is fresh, functional and super funky. The tank has a stubby rounded ‘British Bulldog’ look with arty styling and Union Jack graphics in some options. The seat is contoured and looks shorter than it is, as the rear mudguard, with taillight, indicators and number plate ride on a swing-arm mount.

Lights are all LED and instrumentation is a simple round TFT display, giving all the usual info (trips, speedo, rpm, gear, clock and download the Triumph app for turn by turn navigation). The frame is tubular steel and the suspension is non-adjustable USD Showa forks and a preload only adjustable rear shock. Handlebars have a mild bend, giving the rider a comfortable cockpit with pleasant, sporty ergonomics.

We took a spin into central Jozi’s funky, arty, Maboneng district, to scope out some of the amazing graffiti. The Trident is a weapon in the traffic. Light, agile and endowed with a punchy motor which is never short of poke, it is effortless to ride. The suspension, whilst essentially being preload adjustable in the rear shock only, speaks to Triumph’s excellent setup. It is firm yet compliant over the typical urban minefield that we deal with daily in city riding. This might be the Trident’s reason for being, but it is no one-trick pony. It is so easy to ride that it appeals to all types. Newbies will revel in the safe and easy manners, yet there is plenty to keep experienced riders entertained.

I spent a few days with the Trident, using it as typical owners would. Negotiating traffic or commuting between cities, the Triumph takes it all in its stride. The handling is accurate and stable at all speeds. This makes it a blast to ride anywhere and everywhere. Push it hard around a racetrack, or traverse some really grotty tarmac and you will find that the damping and spring rates are not perfect but then that is not what this bike is about. For the typical Trident owner, the bike is brilliant.

Triumph have endowed the bike with relatively short gearing. At 125 kph the engine is revving at 6000 rpm, which feels somewhat busy, until you recall that the redline is 10250. What the gearing has done is give it power everywhere. Acceleration is sharp and roll-on is impressive.

Nissin triple discs and callipers ensure decent braking performance. The six-speed gearbox is typically Triumph. Light and crisp. A Quickshifter is available as an option. There are actually 47 accessories in the catalogue with which to pimp your ride. Tail pack, tank bag, bar-end mirrors etcetera.

A 14-litre tank allied to the Trident’s fuel economy allows for a decent range of over 250 kays. The seat is definitely touring friendly and at 805 mm is accessible to most riders. The bike really has few drawbacks, given its purpose and price point. The signature cammy triple whine at low speed can irritate some, however, it disappears as speeds rise. For me, it is a characteristic of the excellent triple and a non-issue.

Triumph’s new Trident is, at around R150,000, at the top end of the class in which it competes, however, it has a character and general funkiness and function which makes it worth every cent. Parked in front of some of Jozi’s street graffiti, it comes across as an art form in its own right. Toss in a heap of fun and function and I think Triumph have a worthy successor for the legendary Trident. 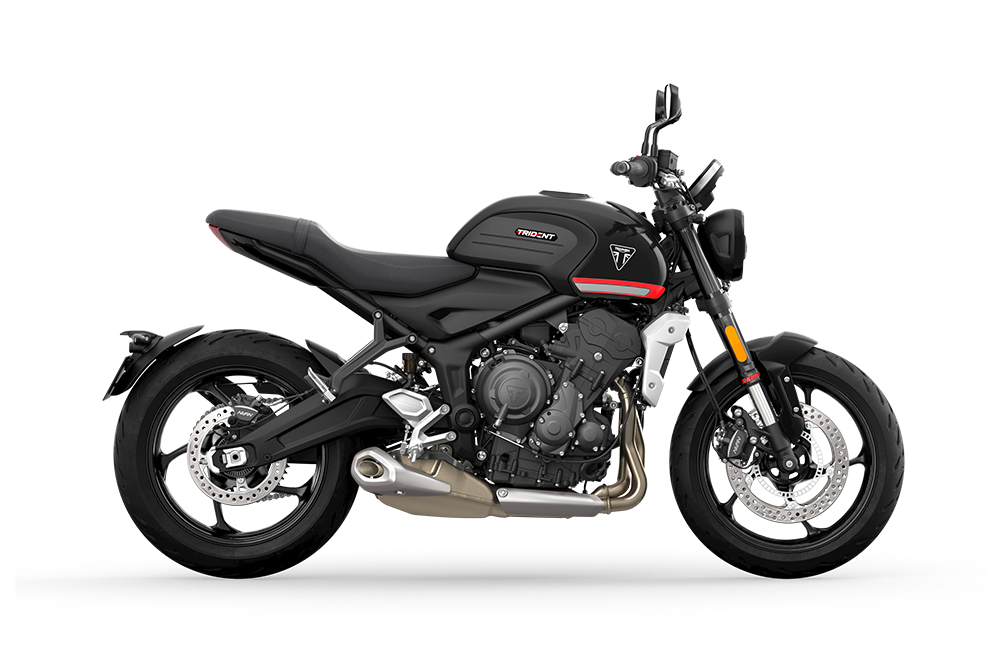