Alongside MotoGP, WorldSBK racing showcases the very best in production superbikes. You can buy on Monday the machine that won on Sunday, and that’s the best way for motorcycle manufacturers to show off their own ideas of excellence and performance.

Since 2015, one machine has simply outshone the competition: the Kawasaki ZX-10R. It’s what six-time WorldSBK champion Jonathan Rea rides, and it’s just been renewed for 2021.

The ZX-10R raised Kawasaki’s game to 184 hp, then in 2008 it managed to deliver 200 hp, along with a new aluminium perimeter frame and improved electronics. The Kawasaki was good enough to be a serious WorldSBK contender, firstly with Tom Sykes (2013 world champion) and then Jonathan Rea, who’s been the undisputed champion since 2015. The Ninja ZX-10R was also the FIM Endurance champion in 2018 and 2019… so it has good credentials.

We can’t really call the 2021 ZX-10R a revelation. Rather, it’s had some changes in the styling, ergonomics and electronics departments—but those have made it better than ever.

The city of Dijon is famous for its genuine French mustard, but around 10 kilometres away sits one of the best racetracks in the world: Circuit Dijon-Prenois. It’s never hosted a MotoGP or WorldSBK race, but it’s a bonafide F1 track! Nicki Lauda and Keke Rosberg won there, and, as a teenager, I was there to witness local racer Alain Prost win his first GP in the famous ‘yellow tea pot’ Renault.

The shape of the track has never changed, and yet it’s rather intimidating. It’s ‘only’ 3,800 metres long—but has 12 corners, and a 1,100 metre long pit straight where you can reach 300 km/h, since you exit the last corner, knee down, at around 180 km/h on the outside rumble strip. It also has five up-and-down hill corners, ranging from a 7 to 14 percent incline. No doubt, Dijon-Prenois is serious stuff, and comparable with Kyalami.

Standing in the pit lane is the 2021 Kawasaki ZX-10R. It’s easy to recognize a Ninja, but the front-end has changed. The shape is more aerodynamic, with winglets below the two LED headlights that are supposed to create an extra 17 percent downforce. The exhaust is also new (the bike is Euro 5 compliant), as well as the livery (I rode the green one, but I also like the black and green scheme).

The new spec includes a 40 mm higher windscreen and 5 mm higher foot pegs; the handlebar position is slightly more ‘open’, and since the tail has been redesigned, the rider can sit a bit backwards and get better top speed protection. At 300 km/h, every little detail counts.

Despite the Euro 5 compliance, the engine is nearly the same, with an output of 200 hp (210 with the RAM air system in play). The motor’s head is 500 grams lighter, the clutch is new and the ratio of the three first gears has been redesigned. A new six-axis IMU works with the bike’s electronics, from the four riding modes to the launch control.

There’s also a new full-colour TFT dash that can be connected to your smartphone with Bluetooth—a serious improvement from the previous generation. Mile-eaters will also be grateful for cruise control, and the optional heated grips.

I rode the base model ZX-10R, but Kawasaki also offers a 500-unit limited edition ZX-10RR. The colour scheme is all-green (just like the original ZX-7R), and the race-ready machine offers special engine parts like Pankl pistons and titanium connecting rods, to push the redline 400 rpm higher. It also has lighter Marchesini wheels with Pirelli Diablo Supercorsa SP tyres, and the swingarm’s height can be adjusted.

If I’m being honest, testing superbikes is not an easy job these days. In a very short space of time, you have to get confident with yourself, confident with the bike, and confident with the speed. I was lucky enough to do two other tests at Dijon the previous month—one with a CBR1000RR-R Fireblade SP, and one comparison test with the new Triumph Speed Triple 1200 RS and its competition.

However, on the day of the Kawasaki test, the weather was not on our side. Cold, wind, rain… we had it all. After a couple of coffees, I finally went out onto the track, a bit worried about what I’d have to struggle with. The sky was dark and cloudy, and the clouds were threatening—and there were still a few wet patches on the track.

Nonetheless, I chose ‘sport’ mode rather than ‘rain’ mode, with a bit more traction control mixed in. From the first set of corners, I feel instantly at home, already getting a knee down and enjoying myself. The rather untameable ZX-10R that I crashed at Zwartkops way back in 2006 (sorry again, Kawasaki South Africa!) was a distant memory.

I’ve got nothing to complain about with the revised ergonomics either. The riding position is perfect for my shape, I’ve got more space for my legs than on the Fireblade and the wind protection is also improved—especially when compared to the Yamaha R1 with its minimalist fairing.

The engine is also on my side: smooth, and easy to control. The in-line four delivers progressive power, yet strong performance, as I spotted 290 km/h on the clock in the pit straight in sixth gear. The gearing is also easier to deal with than on the Fireblade that I rode the previous month. On the slower parts of the track, I can stay in third gear on the Kawasaki without feeling like I’m losing time—while I had to work harder in second gear on the Honda.

Why do I mention the Fireblade so much? It’s not just because it was fresh in my mind, but also because the Kawasaki is noticeably more accommodating. I can’t recall missing a single line or any apex on the green machine, and it’s less tiring to ride, lap after lap.

The proof is that the electronics and traction control worked much less often on the Kawasaki. ‘Total Control’ was supposed to be a Honda virtue, under the influence of engineer Tadao Baba, who designed the 1992 Fireblade. But it belongs to Team Green now, as I’ve never experienced a Ninja that’s so easy to ride and so efficient.

The Brembo M50 radial brakes biting 330 mm discs do a great job, although there is a bit less initial bite than on some competitors. But even though there are three hard braking points in Dijon, I never had reason to complain. If you ride harder, you might disapprove of the non-switchable ABS.

I’d like to give some special credit to the great feedback from the Showa suspension too. The ZX-10R’s wheelbase has been extended by 10 mm (at 1450 mm) with an 8 mm longer swingarm—a consequence of the closer gear ratios. The Öhlins steering damper is connected to the ECU, and adjusts itself according to speed. It only really had to work at the exit of Dijon’s turn 11, when you trash the bike at more than 200 km/h to climb the uphill straight.

You never get bored at Dijon, but I always felt perfectly safe on the ZX-10R.

The new green machine seems to be ideal for track days and building your own speed and confidence. I only have two small complaints: at the apex, opening up the throttle could be smoother. I also had to focus on keeping it clean with the quick-shifter when downshifting from 6th to 3rd at the end of the pit-straight… and at 290 km/h I’d rather be focussing on the next apex!

Besides that, riding the new Ninja was a proper demonstration of how smooth, powerful and efficient the ZX-10R has become. No wonder Jonathan Rea is well on his way to a seventh consecutive title! 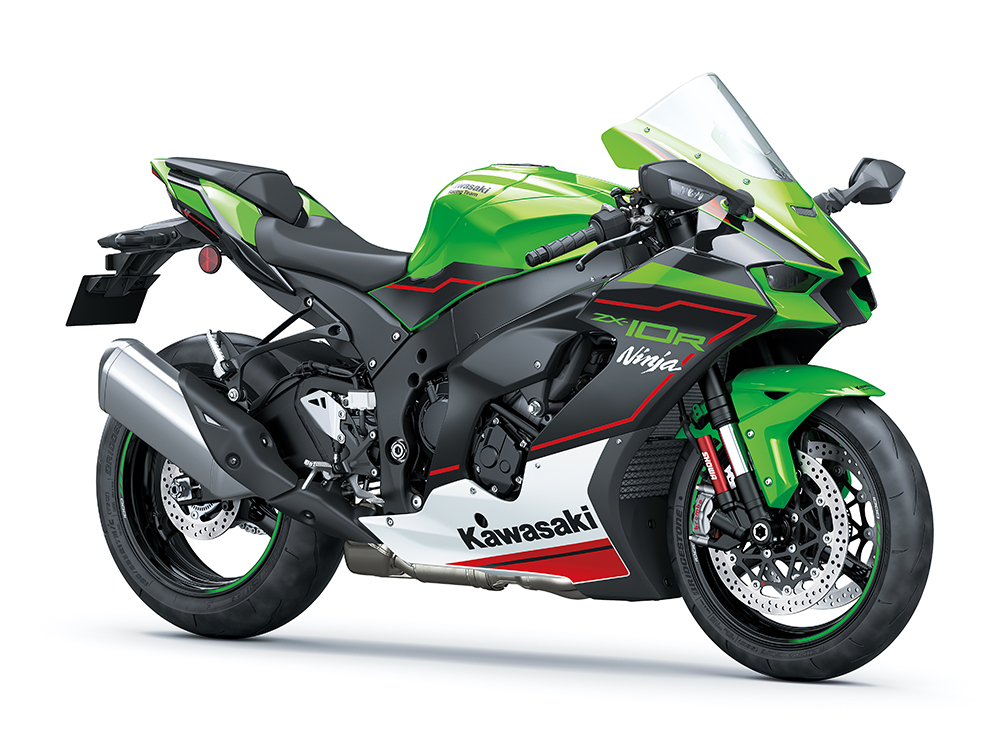