Nearly 30 years old, and with more than 350,000 units produced, the Ducati Monster is a true icon. For 2021, Ducati have radically redesigned the legendary Monster—ditching its signature trellis frame in the process, and upsetting legions of fans. Is it still worthy of the Monster name though? We rode it to find out.

Never say never! Ferrari is close to producing SUVs and electric cars, BMW has gone front wheel drive, and even Moto Guzzi is working on a liquid-cooled V-twin. So, from that perspective, why should we consider the signature Ducati trellis frame eternal?

With apologies to those who think the Monster has lost its identity and now looks like an updated Suzuki SV650, it was actually quite a brave move from Ducati to let go. But it’s still a Monster nonetheless.

It’s also just called Monster now, with no numbers in the name. Forget about the previous Monster 821, and don’t call it Monster 937 (its real engine capacity) or a Monster 950 (like the Hypermotard, which shares the same power plant). Ducati says the new bike is the essence of the Monster. I was cautious at first; but after riding the bike, I truly believe them.

Let’s start with one specific figure: 166 kilograms. That’s 18 less than the previous Monster, and, to paraphrase a certain Colin Chapman, the “light is right” concept is as meaningful as ever when it comes to motorcycles. It’s an impressive weight reduction.

No trellis frame? Yep, just like the Panigale, the Monster uses its V-twin engine as a stressed member, with an aluminium frame running up to the front end. Out back, a composite (read “plastic with reinforced fibre”) subframe supports the rear section.

Nonetheless, the loss of the trellis frame has another benefit: the steering angle has been improved by 7°. Now the Monster can handle traffic jams, and you don’t need to struggle to do a simple U-turn anymore.

The engine offers 111 hp and 93 Nm of torque. I’m old enough to recall memories of the first 1993 Monster—the 903 cc unit produced 73 hp and 80 Nm then, and with a dry weight of 184 kilos, everyone was subdued and considering it a real beast! Since power is nothing without control, the new Monster offers features that the first 900 couldn’t dream of: three riding modes, eight levels of traction control (plus “off” for wheelies) and three levels of ABS, all there to help riders control the beast.

Its light weight is not the Monster’s only asset—the ergonomics are good too. The seat height is 820 mm, but the 14-litre fuel tank is very narrow, the handlebars are 70 mm closer, and the foot pegs are slightly lower (10 mm) and further back (35 mm) than before. I used to like the old Monster’s riding position (legs folded like on a superbike, arms wide open and head low), but I feel very comfortable and confident on the new one.

I also like the new LED headlight’s visual identity, although it does look rather similar to the light on the latest MV Agusta Brutale. The colour TFT dashboard offers plenty of information, and while setting it up takes some time, it’s worth it, as the character of the Monster can be transformed. Let’s go ride it then!

A smooth Monster in town

In town, the new Monster is as easygoing as any UJM (Universal Japanese Motorcycle, for the young folks). Gone are the days where you needed to train like a lumberjack to pull a clutch that was so noisy that it would wake up the neighbourhood! Even the exhaust note is a tad softer, thanks to Euro 5 regulations.

Once again, I appreciate the bike’s lightness and its narrow tank. The V-twin is relatively smooth, it can handle 50 km/h in fourth gear at approximately 2,500 rpm. The ‘Urban’ riding mode is dedicated to commuters—it smooths out the ride-by-wire throttle response and reduces power to 75 hp. In that configuration, the Monster is as easy as a beginner bike, like the Honda CB500, for instance.

One downside, though: the engine releases quite a lot of heat, which you can feel at your knees. Be warned if you ride in a dense urban environment.

A mean Monster on the road

166 kilos, 111 hp: those are great figures, and once on the open road, the Monster shows its full potential. If you love fun bikes like the Yamaha MT-09 and KTM 890 Duke R, you’ll love the new Monster.

With its low weight, responsive V-twin and natural ergonomics, you just need to look through corners, and the bike will draw the perfect line. On board, you are fully in control, and the work Ducati did to shed all sorts of mass (like the wheels) is immediately noticeable. The Monster is a kind of a Moto2 bike on the open road, with great corner entry speed. The power is more than decent, yet delivered in a reasonable way and always usable (forget the aggressiveness of the late Monster S4RS).

The new Monster is also, in its own way, very comfortable. Unlike the wooden suspension settings of some of its predecessors, the 2021 Monster feels plush even in the first few millimetres of suspension travel.

I wouldn’t be surprised to see a Monster ‘SP’ coming into the range, as the current suspension settings are limited, and, in harder riding conditions, some riders might like a bit more precision. But we are talking about some speeds that start to be unreasonable on the open road—also made possible because the Pirelli Diablo Rosso III tyres deliver great confidence, and warm up very quickly. I feel the same about the Brembo radial M4.32 callipers and 320 mm discs; they have all the power and feel you need, under the control of a cornering ABS unit.

A different kind of Monster, but still a Monster

Yes, the 1993 Monster is a legend. But to be honest, its difficult carburation settings, harsh suspension, the clutch lever that gave your left arm muscle cramps and the lack of any turning circle made it an unwieldy beast. The new Monster is softer and easier—that’s a fact—but it also delivers much better performance.

Has it lost its Ducati identity? Slip into an average speed corner, get hard on the throttle, open your ears and you tell me. 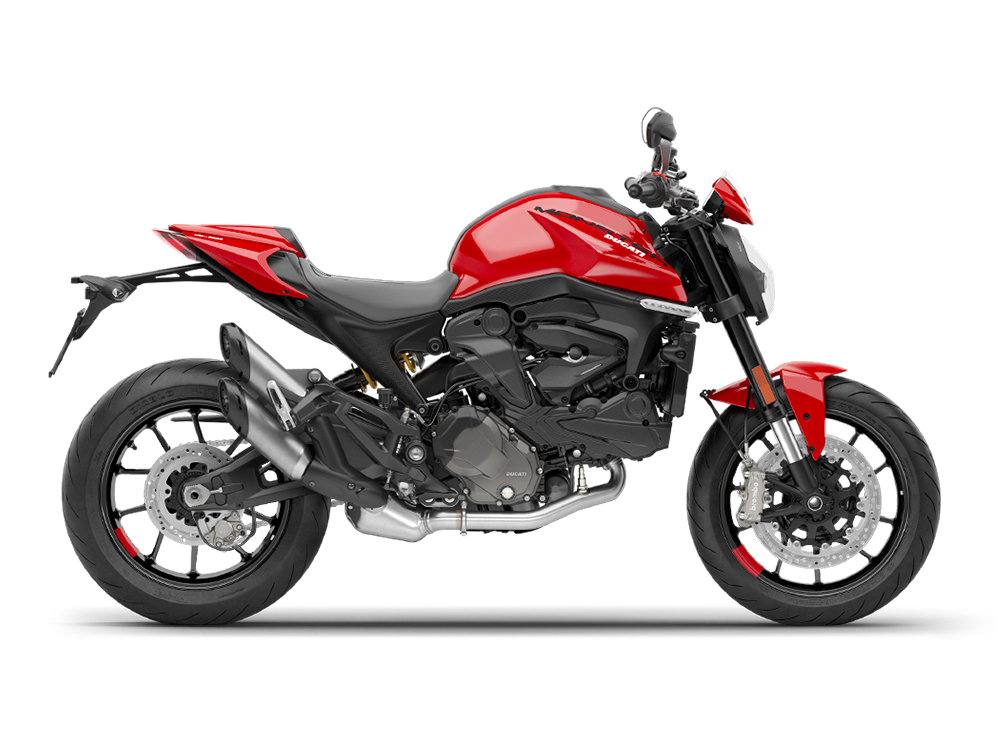