Home News & Features Features What is your ‘go to’ bike?

A couple of weeks ago we endured a really rainy weekend. The rain started bucketing down on Friday and continued unabated until everything was flooding. The Centurion Golf Estate turned into a watercourse as the tiny stream that flows through it came down in flood. I had an appointment to see a client at Cresta Centre on the Saturday morning. I had already been car bound on the Friday, so there was no way that I could even consider using the car for two days in a row. The question was which bike would I use to travel from Pretoria to Cresta?

Surveying my garage, it was a really easy choice. One of three motorcycles, or the SYM CityCom 300i Scooter? Best weather protection? – SYM. Easiest to clean after rain riding? – SYM. Most frugal? – SYM. Easiest to thread through Saturday morning Jhb traffic? – SYM. Rain-proof storage for my files? – SYM. See what I mean? This kind of put what I have discovered over the last few months of ‘scooting’ around on the CityCom, in a nutshell. Absolutely nothing on wheels, be it two or four, is so ideal for dispensing with urban commuting. What comes as a massive bonus with the CityCom 300i is the way it thrives on highways as well. It cruises effortlessly at typical highway speeds with plenty of punch in reserve.

I left Pretoria under leaden skies with rain a virtual certainty. Ever the optimist, I had my rain suit stashed under the seat. As expected, it started spitting as I cruised down the Krugersdorp Highway. I leaned forward behind the screen and bodywork and carried on. The rain protection is so good on the CityCom that there was no need to don my rain gear. Travelling at 120 kph, the screen and bodywork kept me bone dry. It was almost uncanny. The shower eased before I climbed off the freeway and I scooted to Cresta for my meeting.

Locking the bike, I activated the under-seat kill switch for extra anti-theft protection and, after locking the steering with the ignition switch, I covered the ignition keyhole with the lockable cover. Ingenious. An attempt to steal my 250 Ninja a few months ago by ramming a screwdriver into the ignition cost me a bomb. I had to replace all the locks on the bike. A simple solution like on the SYM would have worked a treat and saved me big cost and hassle.

My meeting done, it was back on the SYM for the ride back to Pretoria. The rain had backed off somewhat and I really enjoyed the ride home. The SYM has a gem of an engine. It is devoid of any vibration and extremely willing. I found myself having to constantly reel it in as it happily ran to, and past, the speed limit. It consistently exceeds 300 kays on the 10-litre tank, irrespective of how you ride.

I have got to the point that I am convinced that I ‘need’ a CityCom 300i in my garage. It is definitely the heart and not the head speaking, given that I already own three bikes! The long and the short of it is that the SYM is an incredible ‘go to’ bike. It is an urban mobility weapon of note! It will leave a huge hole in my garage when I am forced to give it back. At under R70 000, it is a steal. I cannot recommend it more highly! 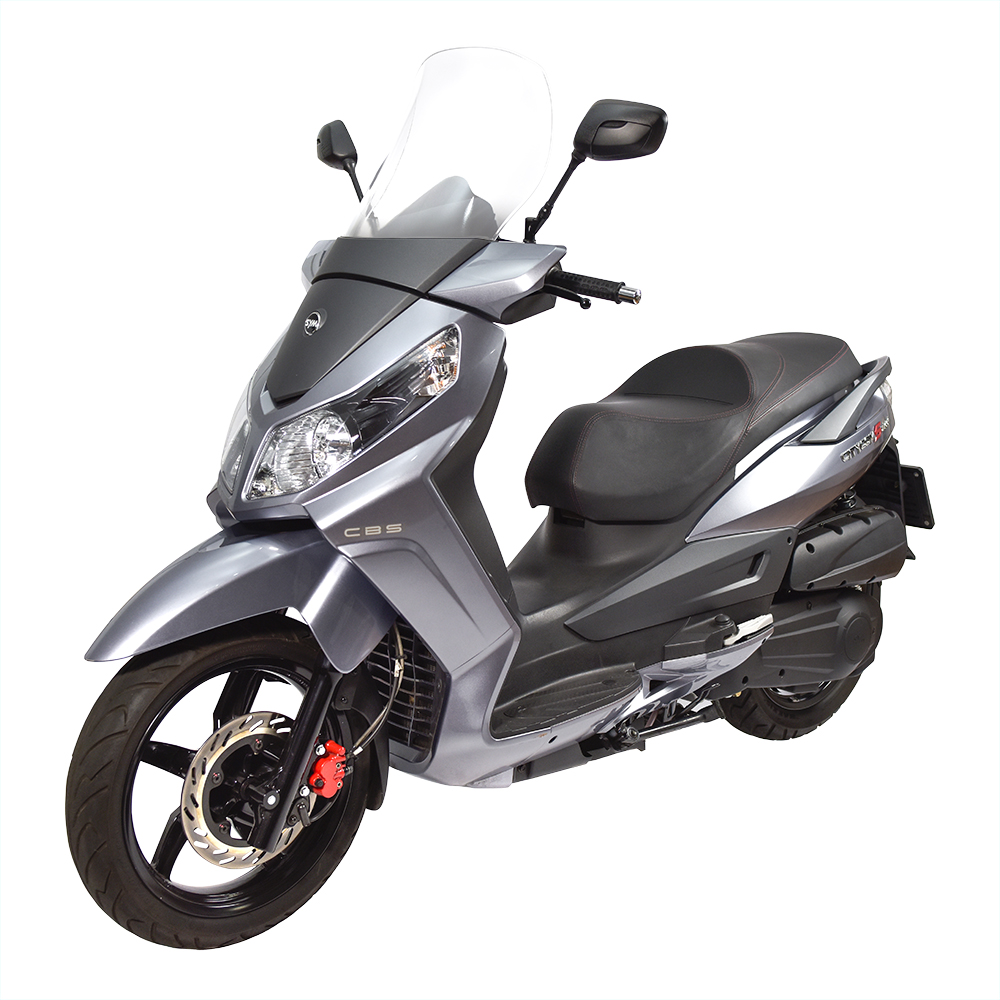