Three years after the launch of the Yamaha Ténéré 700, the Japanese marque extends the range with a new version, called the Ténéré 700 World Raid. How much better is that one compared to the already mighty standard unit? Our man in Europe, Philipe Guillaume, travelled to Spain to find out.

The water is turquoise blue, the rocks are ochre, and the landscape has an infinite taste of emptiness. The wind and harsh sun are my only companions at the time. The deserts of Andalucia are not as big as the ones in Southern Africa, but I can still feel the true spirit of the Wide Wild West experience. (In fact, many Westerns have been shot here.)

Taking a break on top of a canyon, I truly enjoy the moment, engraving in my brain scenery shaped by a million years of geological history. I suddenly feel so humble—much like I would at the top of the Fish River Canyon.

I had to struggle a bit to get here—through stones, sand, and a few steep up and downhills. But it was definitely worth it. I’m grateful to the bike that brought me here, the new Yamaha Ténéré 700 World Raid, and I’m reminded why dual-sport machines are so special.

I step back to admire that piece of engineering, and salute her with a silent thank you. I’m sure she got the message.

The World Raid sits at the top of the Ténéré 700 range. But before we go any further, let’s give kudos to Yamaha for reinventing the human-sized dual-sport machine.

I don’t know about you, but I think there’s something odd about taking 160 hp, R300,000 machines into hard terrain, with a risk of a great loss (although I do enjoy riding them). The Ténéré 700 is a much more reasonable prospect, and also more affordable and more capable. At 200 kilograms, a bit more than 70 hp and not many electronic thingies that can go wrong, it’s the perfect recipe for adventure.

It’s such a great recipe that Yamaha, at one stage, struggled to satisfy the demand. 30,000 units were sold in under three years in Europe, and the made-in-France Ténéré became the “600 to 900 cc” class leader. With the addition of the World Raid, Yamaha Europe expects to sell another 20,000 units this year.

At first sight, it’s not so easy to distinguish the World Raid from the standard Ténéré 700. Viewed from the front, the windscreen is 15 mm higher with added side deflectors, but the bigger fuel tank (23 litres instead of 16) is not that wide. Things look different from the side or back, since the twin fuel caps and new TFT colour instrument panel are specific to the World Raid model.

The two fuel tanks need to be filled up separately, with a solenoid valve that automatically balances the fuel level once the bike is moving. They are well designed, as my legs integrated perfectly into their shape—unlike the ‘legs wide open’ riding position on the 1980s Ténéré 600. The 890 mm seat height requires the rider to have long legs, but then the riding position is perfectly natural.

Once on board, I also enjoy the brand new colour TFT instrument panel, which offers three (very) different layouts—one of them dedicated to those adept at navigation, with an adjustable trip meter. Another function is the possibility of having total or partial ABS deactivation. I also enjoy the wider, grippier foot pegs as well as the relative narrowness at the seat and fuel tank junction, which allows a bit of freedom of movement once in action.

The World Raid offers 20 mm of extra suspension travel at both ends. It now sports 230 mm at the front and 220 mm at the back, plus an extra 18-position Öhlins adjustable steering damper, which might be useful off-road. Extreme off-road riders will appreciate this revamped suspension setup, but the main thing is that the suspension is incredibly plush, no matter what surface you’re riding on. The extra comfort is immediately noticeable and long distance riders will definitely enjoy it.

During this launch in the South of Spain, we covered around 350 kilometres, half of them off-road, and the whole day of riding was an absolute pleasure in terms of comfort. Despite an extra 16 kilograms of weight, the revamped suspension copes with great ease, and I never found the limit of the 255 mm ground clearance—even on sections with serious bumps. On lower speed sections, the World Raid’s handling wasn’t affected much by the bigger fuel tank, thanks to the compliant CP2 engine and the precise and smooth controls.

Out on the road, the taller windscreen brought a little bit of wind turbulence on the top of my helmet’s visor, but nothing too serious. I also appreciated the seat; the World Raid is definitely a serious mile eater.

With the latest Euro 5 specs, though, the engine has lost a bit of its character. It still has great composure, able to cruise in sixth gear from 50 to 188 km/h on the speedo (at 8,500 rpm), but seems to rev a bit less happily than before.

Despite the longer suspension travel, the road-holding is seriously fun. Our Yamaha test ride guide could apply at KTM (that’s a compliment and says a lot about the rhythm we had on that launch, both on- and off-road) and the Ténéré 700 World Raid, as a proper and archetypal dual-sport machine, has some serious suspension travel movement on hard braking sections. Yet it’s incredibly efficient—intuitive, even.

The World Raid would cope with the same ease on everything from straight long-distance Karoo crossings to Mpumalanga twisties. Just follow this advice: take it easy, and the Ténéré World Raid is so efficient that it sometimes feels a tad underpowered. The Euro 5 might have smoothed out the CP2 engine a bit, but the sound note is still pleasant—even if it won’t upset the neighbours.

During the test ride, our fuel consumption was 5,6 l/100 km, a bit off the 500 km range claimed by Yamaha. But the official fuel range might be actually reachable, as we had a proper fast pace on the day.

Is there anything the World Raid can do that will be out of reach for the standard T7? Well, despite the extra 100-plus kilometres of fuel range, the answer is not really.

The standard T7 is; simplistic, lightweight, and competitively priced which makes it our first choice as the preferred T7 to own, which is a good thing, as the Ténéré 700 World Raid won’t be coming to South Africa—at least not for now.

For more information on the Yamaha Ténéré 700, click on the link below… 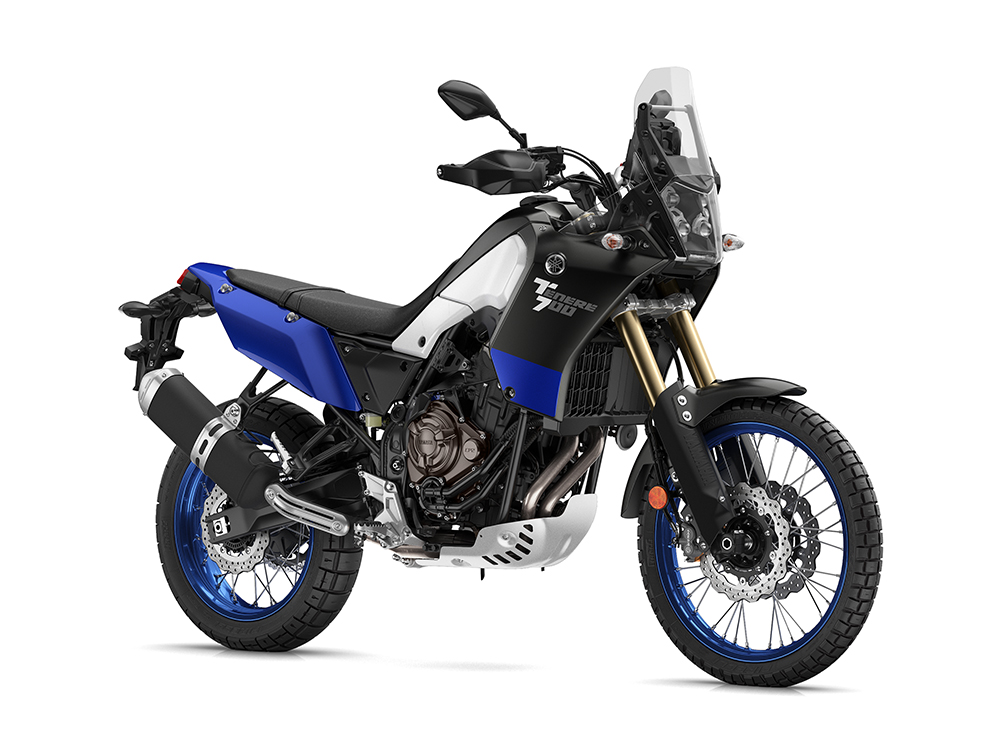