I love the way motorcycle design keeps evolving, ebbing and flowing, as certain styles and engine configurations and capacities go in and out of fashion and then, years later, come back into fashion: nothing stands still.

Then, in the early 2000s, Triumph reintroduced the parallel-twin to a new generation of engineers and riders and, from there the configuration has never looked back, with the likes of Yamaha, KTM and BMW adopting it.

More recently, Aprilia have jumped on the bandwagon, lopping their V4 motor in half and giving us the 660cc engine that does service in the RS660, Tuono 660 and, now, the Tuareg 660 adventure bike: it’s a great engine that just loves to rev. and puts out a healthy 100bhp.

On paper, that’s all wrong for an adventure bike, where what you really need is lots of low-down torque for plugging along the wild trail. So, for the Tuareg’s unit, Aprilia has done a lot of work internally: power is down to 79bhp but, more importantly, peak torque is delivered at 4,500rpm, 2,000rpm lower than the same engine in the Tuono and RS, with 75% of torque available at 3000rpm and 90% from 5500rpm. With a 270° firing order, it has the feel of a V-twin and, more importantly, a great sound: deep and gruff at low revs and a great howl at high revs.

Sit on the highway at the legal limit and snap the throttle open and the bike surges forward in a way that no 660cc engine should do. Gone are the days of gutless smaller-capacity engines: now you take a look at the Aprilia 660cc engine and wonder why you would ever need anything bigger.

While it is not a ‘retro’ design, the Tuareg does resurrect the name from the mid-1980s to mid-1990s adventure bike (not that they were called that back then). The new Tuareg is a tall bike which has a purposeful stance and has the appearance of a large trail bike as opposed to an adventure bike, although the lines are getting more and more blurred between the two descriptions as manufacturers look for more ways to find niches for new models and the middleweight category gains traction.

The Tuareg was designed by a team at Piaggio’s Advanced Design Centre in California – the same team that brought us the Moto Guzzi V85TT – but the Aprilia looks far leaner, with form following function and no-frills.

Aprilia have chosen not to give the front a beak, sticking to a wheel-hugging mudguard – straight out of the ‘80s! Not sure how that will work if the going gets muddy and it starts to build up in the small space between mudguard and tyre. The overall appearance is not dissimilar to the Honda Africa Twin, especially if you opt for the red, white and blue colour scheme.

The test bike, as you can see from the photos, was in the black/yellow-gold colour scheme which looks great, although you can imagine the yellow-topped seat getting pretty grubby very quickly, especially if the bike is used as intended, off-road.

We all know that a lot of adventure bikes will never see anything further off-road than riding up a kerb in Sandton but to reduce the Tuareg to a life on tar seems like it would be a waste of talent. Right here I have to admit that time didn’t permit me the opportunity of taking the Tuareg off-road but you just get the feeling that it might cope with such treatment very well and, certainly, any road tester who has had the opportunity to take to the rough stuff confirms this. There is an innate balance and lightness to the bike that suggests it would be very easy to throw around in the dirt.

Even riding it on the road, you get a sense that here is a bike that means business. The seat doesn’t look promising but is much more comfortable than its shape would suggest. It’s long and fairly narrow which helps when standing up on the pegs (yes, I did try that on the road but only when no one was looking…!). You even get the impression that a pillion might not hate you too much if you subjected them to a longer journey on it.

While Aprilia has foregone a separate bolt-on subframe to ease the pain of off-road accidents, suggesting that the company isn’t pitching the Tuareg at the hard-core off-road crowd, the suspension feels to be configured for off-road work. There’s a generous 240mm of suspension travel with full adjustment at the front and preload adjustment at the rear – all manual. At first, it feels off-road-bike soft but actually proves to be great for road riding, with a lot less fork dive under braking than you might expect and, of course, on our terrible roads, that suppleness is more than welcome.

But it would be a shame to buy this bike only to confine it to road riding. With all the work that Aprilia has done to the engine and the chassis into which they have installed it, why would you not be tempted to take the road less travelled and have some fun?

That’s not to say that it isn’t fun on the road: with that chassis, suspension and engine, it is a blast to ride on a twisty road, the riding position and wide bars giving great leverage and a confident feel, despite the off-road-biased Pirelli Scorpion Rally STR tyres (21” at the front and 18” at the rear).

The natural rival to the Tuareg 660 is the Yamaha T7 and it is another of those interesting things about modern motorcycling that the two companies have set off for the same destination taking completely different routes. While the Yamaha is simple and unadorned by electronics, the Aprilia is the polar opposite.

The electronics suite on the Aprilia is comprehensive: switchable traction control has four levels of adjustment and engine braking has three levels of adjustment. There are four riding modes: Urban and Explore are pre-set while Individual and Off-Road have adjustable parameters.

The bane of the tester is coming to terms with the complexities of modern electronic systems on lots of different motorcycles with only a few days to get used to them before the next bike comes along and you have to unlearn and relearn. Nevertheless, the system on the Aprilia appears to be fairly intuitive and certainly, longer exposure to it would render it easy to use. The TFT dash isn’t the largest but still perfectly legible.

Build quality appears to be first class: nothing rattled or had the look of being too flimsy: Aprilia has done a lot of work to ensure that the Tuareg’s strength is more than skin deep. The screen is not adjustable but actually did a very good job of keeping the frosty early morning air off the rider.

In terms of price, it is time to stop goggling at the price of bikes these days and accept it for what it is. Yes, the Tuareg 660 is expensive – R260,000 is a lot of money and it is R20,000 more expensive than the Triumph Tiger 900 and R60,000 more than the Yamaha T7. But to concentrate on that price difference is missing the point: buyers these days buy on brand loyalty above a cold, hard calculated appraisal of each bike’s pros and cons – maybe they always have?

In terms of weight, the Tuareg is the lightest of the three at 187kg (dry), while the Triumph tips the scales at 201 kg and the Yamaha a close second at 189kg (both also dry). The Tuareg can fit a useful 18-litres of fuel in its tank, the Triumph 20-litres and the Yamaha 16-litres. Certainly, the fuel gauge on the Aprilia seemed very reluctant to move, attesting to very good consumption and, therefore, excellent range.

So, someone who is interested in the Tuareg 660 is interested because he or she likes Aprilia and neither the Triumph nor Yamaha will ever be a viable alternative and, in choosing the Aprilia, they will be by no means choosing second-best. The days of deeply flawed models are long gone and every new bike offers immense capability. The Aprilia is not necessarily better than the Yamaha or Triumph but, by the same token, it’s certainly no worse: I suppose that, in the long run, it all comes down to what name you want on the tank. For Aprilia to achieve such a high standard at its first (modern) attempt is high praise indeed.

Looked at that way, the Aprilia Tuareg 660 is a very tempting proposition, a bike with a lot of ability and no small amount of Italian flair and that, for some, will be the icing on the cake. 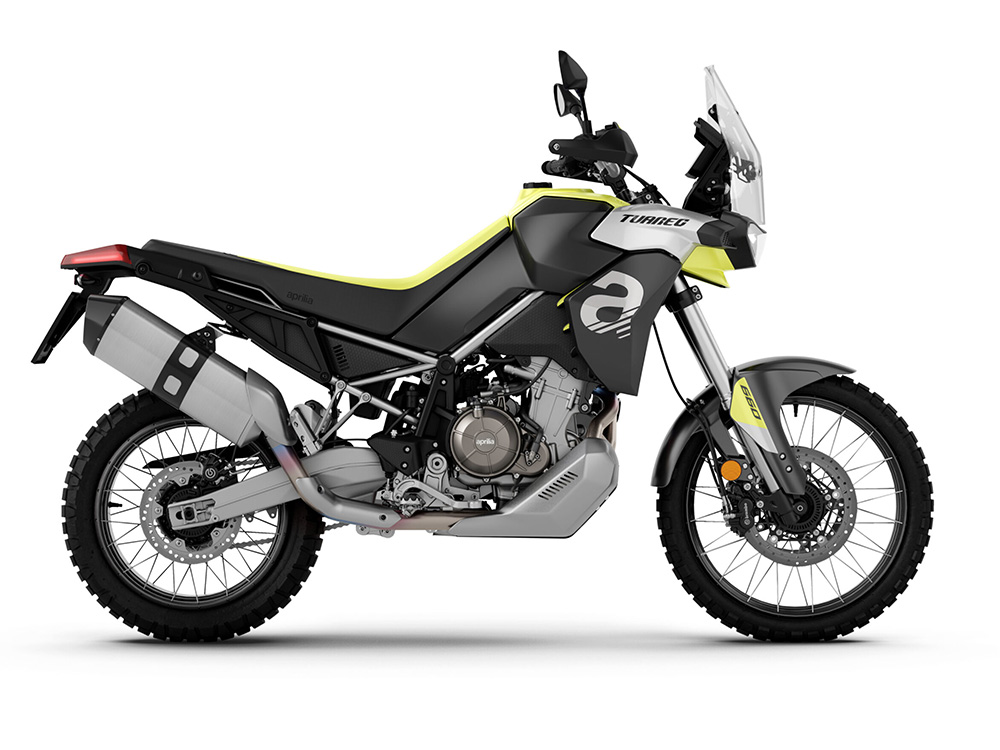