I think that Husqvarna boss, Fred Fensham, saw the wistful look on my face when I was giving the pre-production Husqvarna Norden 901 a visual once over. “I tell you what Dave,” he said, “you can be the first to have a proper ride on the first Norden demo when our stock arrives”. And so it was that I picked up a beautiful brand new Norden, Remus slip-on pipe and all, with a whole 1,7 kilometres on the clock from Husqvarna’s Kyalami premises.

It was a Friday morning and my research revealed that whatever direction I rode, it was likely to be a wet ride. Rain was forecast for damn near everywhere. I was also mindful of the 1000 km service requirement, so my initial plan to see Augrabies in full flood was shelved. Mpumalanga was likely to be a mud-fest, so Clarens was next on the list. Let’s go! I’m not going to rehash all the bikes bells and whistles, which are pretty comprehensive. We told you all about that after the South African launch. This is about how it works and almost more importantly, ‘feels’, in the real world.

I went home, slung a few overnight things into the trusty Flying Brick, cinched it onto the Norden and went to fill up on fuel, buy biltong and a bottle of Kleine Zalze Cab Sav, for what promised to be a damp evening in Clarens. On that note, I like the way Husky have arranged the rack and passenger grab handles on the Norden. The handles are ever so slightly higher than the sumptuous passenger saddle, giving a wide flat surface on which to strap a bag. The handles are made of a black ballistic nylon type material. The advantage, over most adventure bikes with painted aluminium handles, is that your bag doesn’t scuff the paint, marking it, or worse, rubbing through the paint. No worries with the Norden.

The rain started chucking down as I was fuelling so I pulled on my rainsuit, before riding to meet my son who was joining me for the trip. Murphy the bastard! Typically we were not even 10 kays down the road and the rain stopped. What impressed me was the level of weather protection that the screen and bodywork of the Norden affords the rider. Significantly more than its KTM 890 siblings.

The screen pushes the wind to the top of your helmet and leaves your upper body in still air. A taller touring screen is apparently available, so if you are a ‘length job’ of note, you can bump the air over your head or alternatively fit a smaller deflector to the top of the screen.

With the rain stopped, the degree of the humidity in our rainsuits was off the charts. You perspire so much you could just as well not even have bothered with the rainsuit. We negotiated the Jo’burg traffic and rode to the Total just before Heidelberg to stop and rip off our sweatsuits. This gave me some time to ponder Husqvarna’s target market with the Norden. The clue, I think, is in the name they give their optional serious offroad mode. “Explorer”, they call it.

Their promo videos featured Dakar ace Cyril Despres and South African explorer extraordinaire, Mike Horn. Adventuring north and exploring some of the toughest, most remote parts of Scandinavia on their Norden’s, kind of summed it up. This is a serious weapon for the long haul. It goes beyond the KTM 890 Adventure and falls just short of the offroad capabilities of the benchmark for adventure bike offroad ability, the KTM 890 Adventure R. It allows you to play in both those spaces without much compromise.

Looks are obviously totally subjective. Let me just say that every person who saw the Norden, remarked positively on its cracking looks. It is a fresh and totally Husqvarna take on adventure motorcycle styling. It actually endows the bike with a kind of aura unique to chosen instruments of a discerning sportsman. It backs up its looks with function and real capability. Interestingly it was functionally significantly better than the pre-production models that we rode at the media launch last year. More on that later.

We rode through the Free State under leaden skies pregnant with rain. Every farm dam was full to the brim and the veld was a verdant grassland as far as the eye could see. The cruise control was a pleasure. The 889cc parallel-twin, with around 105 hp and 100 Nm of torque, has power everywhere. It is smooth and has an urgency when you crack the throttle that is really exhilarating. Aiding in accessing its linear power is a slick gearbox with an excellent up and down quick-shifter.

In the interest of bedding in a brand new motor, I set the cruise control at 130 kph, equating to around 5,000 rpm. Watching the range on the tidy TFT display as we ticked off the kays, it was apparent that the Norden has a decent fuel range given its 19-litre tank.

As we rolled into Bethlehem we were threatened by a storm of apocalyptical proportions. You all know that feeling of indecision around donning your rainsuit, wondering if you may just dodge the rain. It is such a pain wearing enduro boots and trying to pull on a rainsuit. The wind was gusting, telling all and sundry that the dark gloomy threatening skies were not for show.

As we turned towards Clarens I realized that the wind was blowing from our right, carrying the rain away from us. Yes! Rolling into Clarens we made a beeline for the brewery. Dehydration from wetsuit induced humidity needed addressing. With riding done for the day we could chat about the Norden over a cold chap. 386 kays with still 60 reflecting on the range display. Not too shabby, over 22 kays to the litre. A lady who told us she rides a GS, stopping to eyeball the Norden, told us that we had just missed 38 mm of rain and hail tossed on Clarens literally 10 minutes prior to our arrival. Eish!

The Norden is comfortable. The riding position is near perfect for my 6’3” chassis. The height-adjustable seat, whilst firm, is properly supportive. The tank splays your legs slightly, but when you stand in the dirt you can actually grip the front of the seat between your knees. This gives you a planted feeling and allows you to focus on the road. Early the next morning I took the Norden for a blast in the dirt. The Pirelli Rallye tyres worked well on the damp loamy dirt roads around Clarens. The rain had washed plenty of ruts into the roads and exposed surface mini lurker rocks. The kind of surface where we experienced some headshake on the pre-production bikes.

The production Norden was absolutely planted with not any hint of instability whatsoever. I hit whoops, ruts and lurkers that would tie many adventure bikes in knots, but the Husky stayed taught and composed, the WP Apex suspension keeping things totally under control. The 220 mm fork and 215 mm shock travel soaks up bumps and ruts with aplomb. Suspension with decent discernible damping keeping things tidy is such a pleasure. You ride without gritting your teeth and enduring rough surfaces, but rather grinning and styling as the suspension soaks up the terrain.

On the tar, especially with low fuel levels, all carried low in the ‘saddle style’ tank, the Husqvarna feels like a big motard. You kind of point and shoot, the potent motor and quick-shifter blasting you out the corners and the brakes stopping you effortlessly, to then do it all again. The Norden is a serious weapon both on the tar and in the dirt. I once had a shirt that was embroidered with the words “What you are wearing never stops talking about you”. So it is with the Norden.

Guys often buy bikes to project an image. A rider on a KTM 890R is telling you that the tar sucks. “Let me loose on gnarly dirt and I’ll show you who is who!” The GS boys are saying “1000 kays, is that all, what will we do this afternoon?” Now when you buy a Norden you kind of straddle both those worlds. You are up for big days in the saddle and there is no need to shy away from gnarly dirt. Rolling up on the Norden, with its fresh and unique looks, allied to Husky’s impeccable pedigree, suggests that this is a thinking man. He appreciates both function and form and this is reflected in his ride.

Riding back home the following day, we left Clarens in bright sunshine and blue skies, strewn with the odd white cloud and the air a crisp 15 degrees. The landscape, with its spectacular sandstone mountain vistas, was pristine, washed clean by the previous days downpour. How do people live without motorcycles, I wondered? The bikes revelled in the cool dense air. Riding from Bethlehem, we had a significant headwind for at least 100 kays. I thought that this would play havoc with my consumption. I had bumped the speed to 140 too, now that the Norden had 500 odd klicks under the belt. I expected to have to refuel before home. To my surprise, it hardly made a difference. With 390 kays on the trip I rolled into Pretoria with 40 kays of range left. Impressive!

My time spent on the Norden was an absolute blast. I enjoyed every minute. It is the kind of bike that has me thinking of riding the Khomas Hochland in Namibia with a like-minded buddy, our tents pitched in the desert and a dinner fire going, without a soul in sight. Whatever your idea of adventure, the Husky is up for it. If guys think with their heads, rather than with their hearts or egos, then I think the Norden is going to win over a significant number of adventure riders.

Many bikes require that you have to pay extra to fit these bits, or mod the suspension to make it work properly. With the Norden, this is all ex-factory. What you get to boot with the 901 is that indefinable Husky zeitgeist where they have created an almost ageless aura around their Norden. I absolutely dig it! 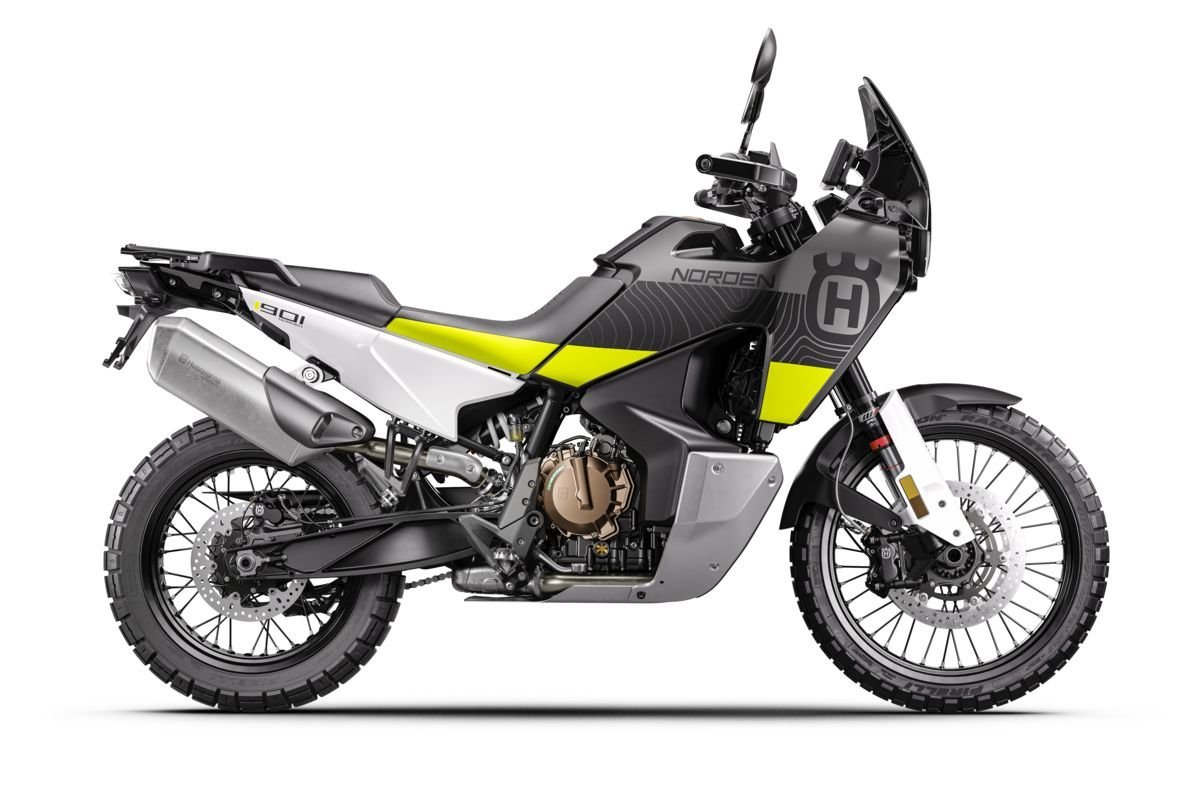 A huge shout out to Fred and his team for the privilege of being the first journo entrusted with the Norden. It is greatly appreciated.