After the 939 Hypermotard and the 950 Multistrada, the Supesport is the third platform to receive Ducati 937 cc liquid cooled V-twin. We’ve tested the standard version on the road near Seville in Spain and the S during a couple of sessions on Monteblanco’s racetrack.

1973: performance is everything in the biking world, and the Ducati Supersport is the ultimate dream for bikers, who can then afford the replica of Paul Smart’s historic victory at Imola. An icon for sure. 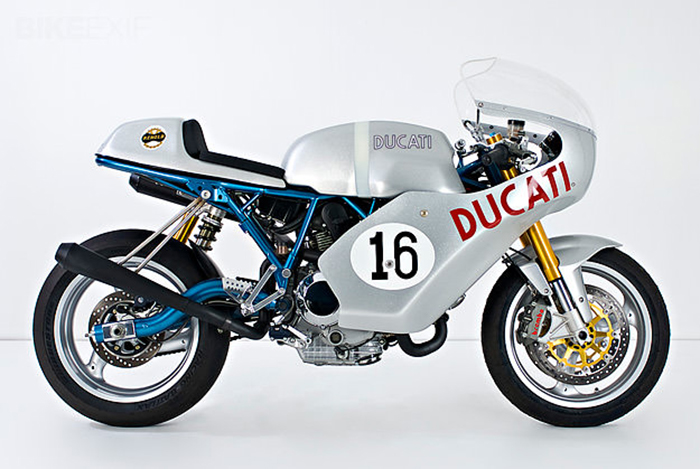 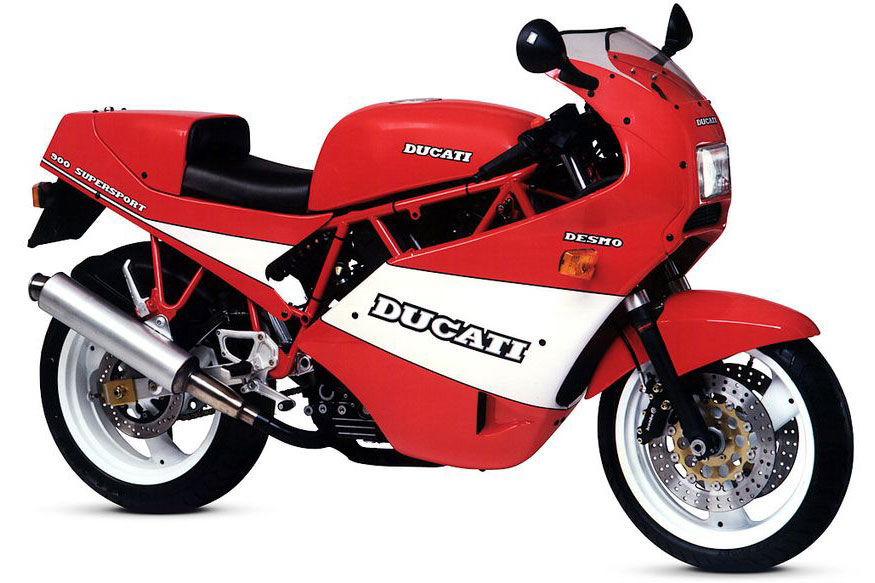 2017: marketing has became an exact science, and the Supersport is aimed at the discerning rider who wants the Ducati DNA and looks, but does not want an extreme ride. That’s why Ducati turn the Supersport into a Panigale look-alike. That strategy seems vindicated, as the Supersport has been voted the best-looking bike at the former Milan motorcycle show. 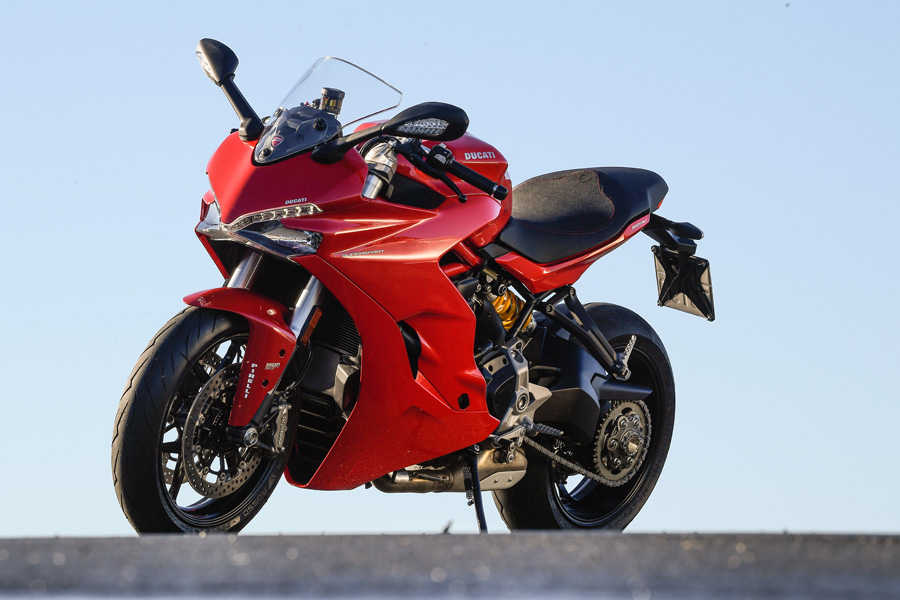 The classic Ducati design has evolved, though: for the first time, the tank flows smoothly into the fairing, and the instrument panel is integrated in a small plastic binnacle, a tribute to supercars dashboard. 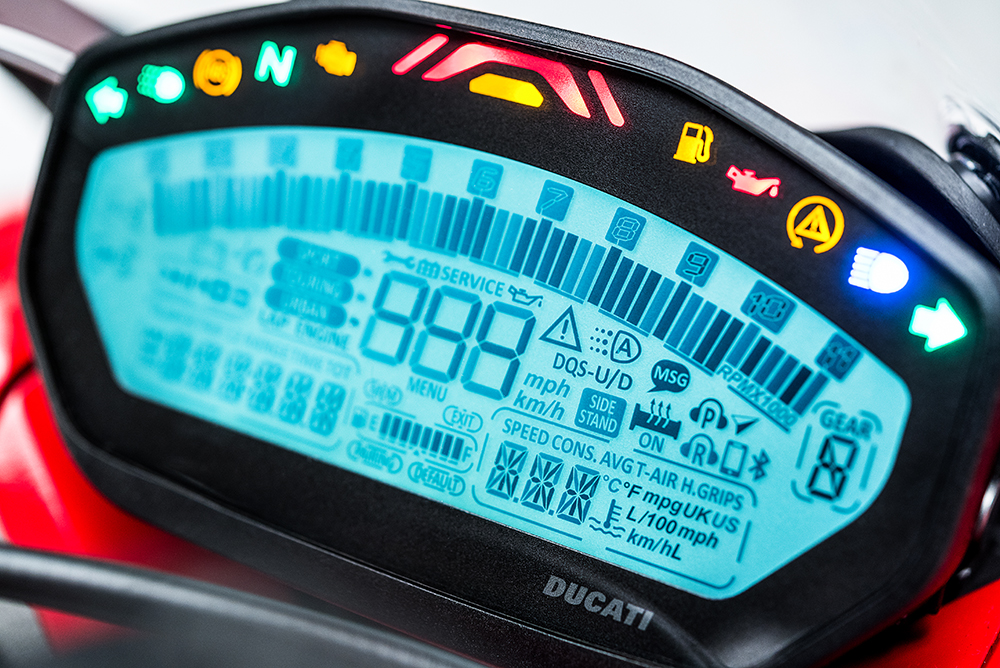 However, supercar performance is not what the 937 cc mill, more or less similar to the one known on the Hypermotard and the Multistrada, claims to deliver. Some remapping allows the Supersport to deliver its torque earlier: where the Hypermotard claims 114 hp at 9 000 rpm and 98 Nm of torque at 7 500, the Supersport is good for 113 hp at 9 250 rpm and 96,7 Nm 1 000 rpm earlier than its stablemate. Obviously power and torque figures have been designed for everyday riding rather than the race track.

Some accessories are available for both road or sport use: light touring soft cases, heated grips, a higher windscreen, a couple of performance parts (such as a billet aluminium master-cylinder and levers), carbon mudguard, and the almost-compulsory Akrapovic exhaust, which gives the bike an extra 2 % power and 9 % torque. 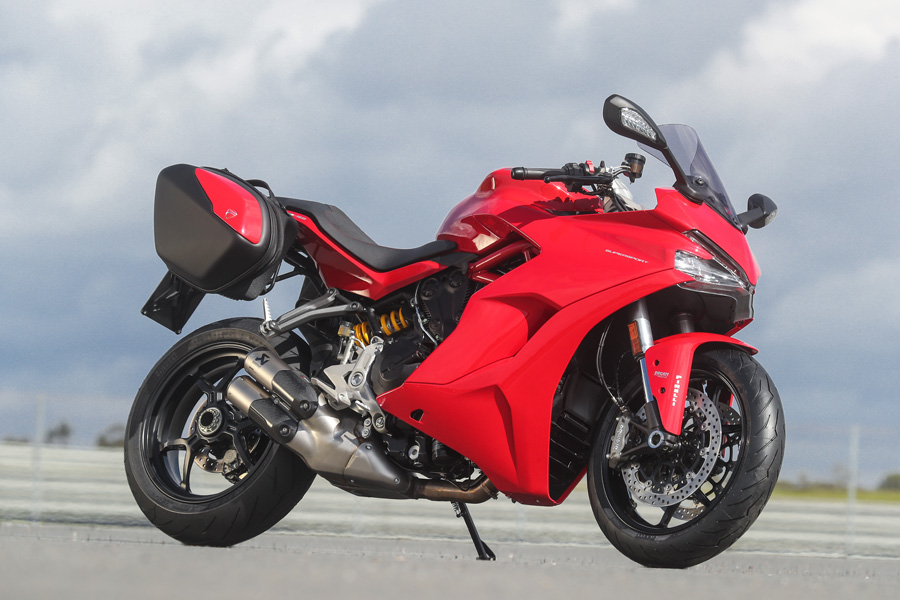 As the test ride started on the road, I was delighted to discover a comfy riding position, quite comparable to the Kawasaki Ninja 650. The Ducati feels as light and nimble as the mid-sized Kawasaki, and the fuel tank is even narrower. The typical Ducati sound accompanied our start and I found the engine to be relatively smooth at very low revs: 3 000 rpm in 3rd gear means 50 km/h. The “urban” riding mode reduces the power to 75 hp and the throttle response becomes extremely gentle.

Even in “sport” mode, the power delivery is smooth and quite linear throughout the power band. Sound becomes deeper once the 6 000 rpm line is passed, and although the rev limiter kicks in at 10 000 rpm, the 937 cc engine gives up at 9 500. Performance is there, though, as we managed to get 245 km/h on the speedo, in sixth and near the rev limiter. At a more reasonable speed (120 at 4 800 rpm in 6th), the Supersport is a peach. The windscreen can be manually moved in high position, 50 mm further up, and offers a bit of wind protection to the shoulders.

Sport-touring bikes are becoming rare these days. Amongst the Supersport competitors are the Honda VFR800 and the Kawasaki Z1000SX, but the Ducati will be a benchmark for the pleasure it delivers in corners, due to the awesome lightness feeling, traditional Ducati chassis feedback, and the more-than-decent Pirelli Rosso 3 tires. Yes, the power figures are nothing exceptional, but the pleasure comes from the bikes’s feel and the Ducati deserves many trips to some of the country’s great twisties. 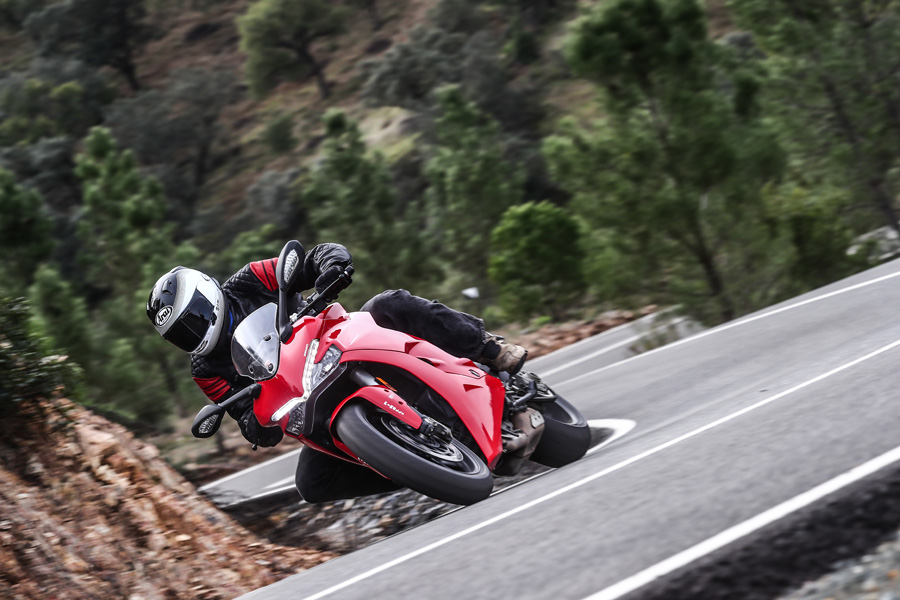 Time to swap the base model for the S version. The 4430 meters long Monteblanco circuit seems to be designed for cars, as most of the corners are angled at 45°. However, the pit straight is reasonably long and there is an interesting section, with a fast, blind, uphill right-hand corner.

Power and ergonomics are identical for both the Supersport and the S, but the latter’s suspension is in another league: the front Marzocchi 43 mm USD fork is replaced by a Öhlins 48 mm and same applies to the rear shock. Suspension travel is the same, though: 130 mm in the front and 144 mm at the back. 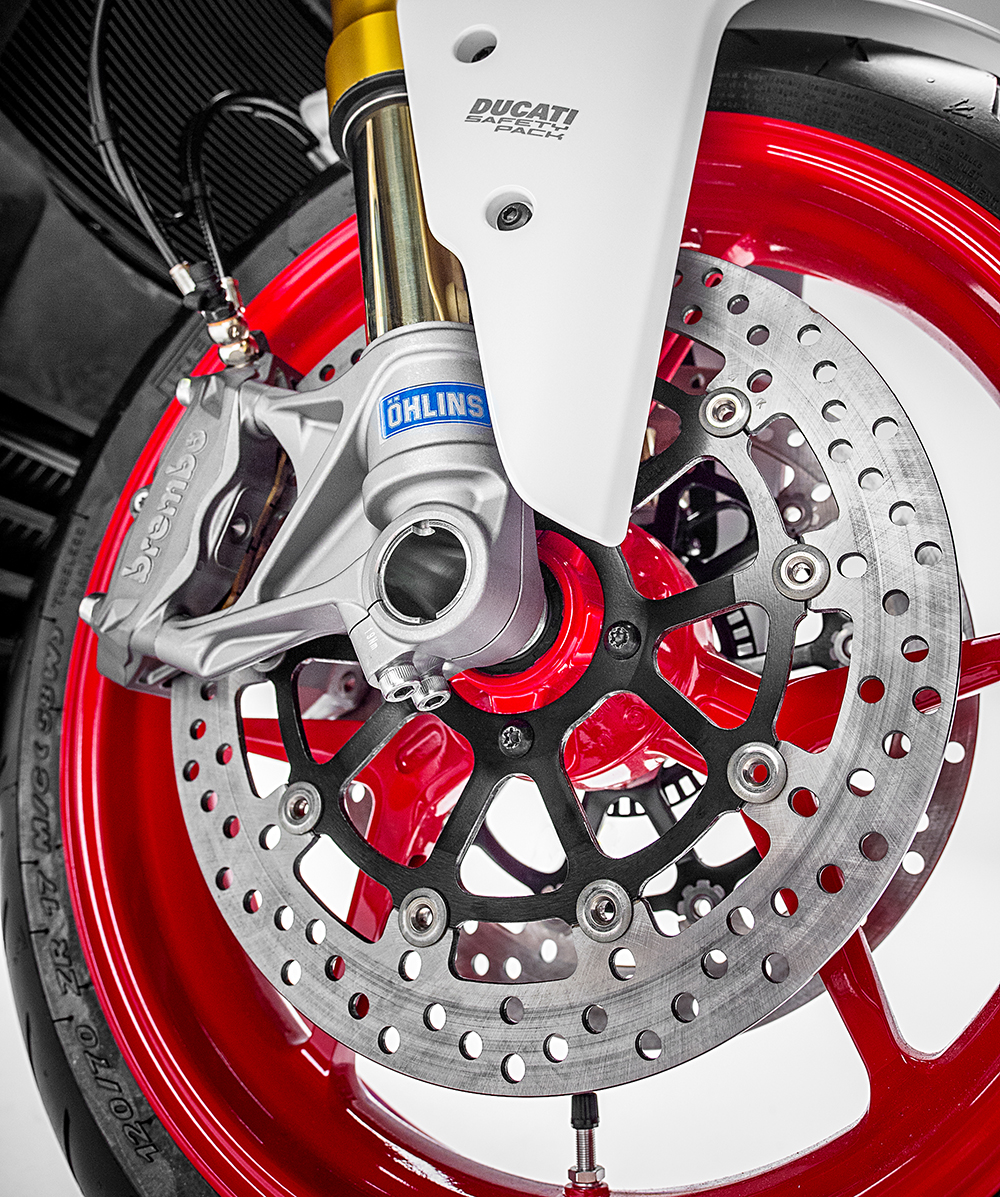 Our first session on the track was not that satisfying, though. The set-up was too soft and a lot of movement occurred during the braking phase. Those brakes are interesting, by the way: as the Supersport is aimed at a wide range of riders, the initial typical Ducati “super-bite” effect is not there. However, if you push very hard, you come to realise that the braking power is really there – a bit like carbon brakes. Flat-out in the straight, with the windscreen in high position, the protection is more than decent and you can fly at over 240 km/h with no wind turbulence. 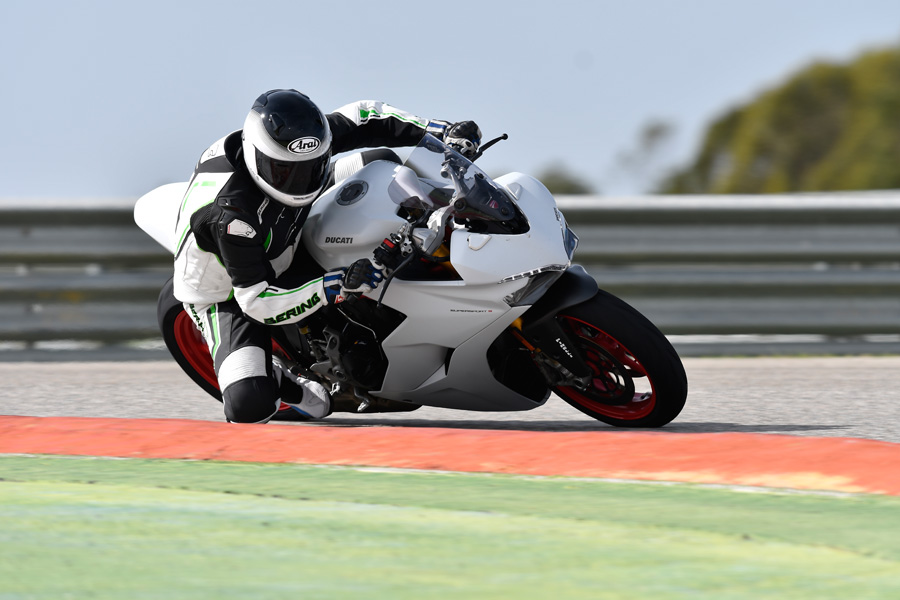 The great thing about the Öhlins shocks is that they react well to different set-up: with more compression at the front and less rebound at the back, the Supersport is more stable and pleasurable to ride. But on the track, as it’s not a proper superbike, the riding position becomes an issue, and the traction control testified that I gave the the Pirelli rubber a hard time.

However, these bikes are all about compromise: do we ask a sport-touring bike to be a good tourer AND a good track bike, or to give equal pleasure and performance in both cases at the sacrifice of record-setting lap times? The Supersport scored many points by being easy to ride in any condition while capitalizing on the desireble Ducati looks and DNA.