It’s funny how some engine capacities go in and out of favour as the years go by. Back in the 1960s, 650 cc was the capacity for any self-respecting sporty bike, largely driven by the British and models from all the major manufacturers – Triumph, BSA, Matchless, AJS, Norton, etc.

But that class largely disappeared, with few direct replacements. Then, all of a sudden, the mid-size capacity has started coming back into vogue, albeit in a slightly different form. The Yamaha MT-07 has given birth to the new R7 sports bike, with a capacity of 750 cc and Aprilia has also joined in the fray with the new 659 cc RS 660. Triumph recently brought out the Trident 660 but that was competing in a different segment, more in line with the MT-07.

However, now Aprilia has joined Triumph and Yamaha in the naked middleweight class with the naked version of the RS 660, the Tuono 660. This follows established Aprilia thinking: a full-on sports bike accompanied by a more-relaxed-riding-position naked bike complimenting it.

The Triumph and the Aprilia might share engine displacement but, in reality, that is where the comparison ends. Whereas Triumph has built the Trident 660 to be a perfect introduction to the brand and given it less-sharp (but never soft) edges, the Aprilia 660 Tuono is as sharp as anything to come out of the Noale factory.

It is clear that the inspiration for the Tuono 660 is the Tuono V4 1100, that fire-breathing, bellowing beast of a bike. Walk up to the 660 and there is little at first glance to tell you that this is the smaller-engined version. The styling is virtually identical, which is no bad thing: at once aggressive and attractive. Only on closer inspection do you notice the single-cylinder bank housing the parallel-twin engine and appreciate the overall smaller dimensions.

It is this outward similarity to its bigger brother that, at first, readers the Tuono 660 a little underwhelming. At 94 hp and 67 Nm of torque, it has 80 hp less and half the torque of the 1100 V4 and, naturally, that goes a long way to tame the insanity that is a large part of the 1100’s allure.

All it takes, however, is a small recalibration of the senses to rid yourself of this unnecessary first impression and realise that you are riding an incredibly accomplished machine with more than enough punchy performance to satisfy even the most jaded hack while offering exhilaration to new riders without scaring the pants off them.

Such breadth of ability is immediately apparent in the behaviour of the chassis. It is at once sharp and beautifully balanced but also ridiculously easy to ride fast and well. At no point do you feel you need to take charge and manhandle it around: it does everything seemingly as you think about it. The wide ‘bars (well, only slightly wider than those on the RS660 but, crucially, offering a more upright riding position) give plenty of leverage and the response is instant and predictable, being sharp but forgiving. The whole riding position is very well executed with no feeling of cramp, even for a tall rider.

The engine really is a beauty. No parallel twin has any right sounding this good – at once rumbling and meaty – but the layout gives all the grunty benefits of a v-twin in a much more compact form. The engine in the Tuono 660 might have 5 hp less than the RS 660, but low-down torque has been exaggerated slightly through the use of slightly lower overall gearing, giving urge from low revs all the way to the red line. It delivers performance that will feel no different to the RS, certainly in the throttle response and acceleration fields.

The electronics on the Tuono 660 are the perfect example of trickle-down technology from flagship models to bikes lower in the range. For a mid-sized – dare we say ‘entry-level’? – bike to have five riding modes, with one fully customisable, including traction control, wheelie control, cruise control and variable engine braking parameters, is simply astonishing. A quick-shifter is an option (as is cornering ABS) but the gearbox is so good, making clutchless shifts a doddle, that you really don’t need it. Everything is controlled via a small but clear TFT dash and LED lights illuminate your way at night.

The different riding modes give varying levels of all adjustable parameters and throttle response. At one end is ‘Commute’ which keeps everything smooth, while ‘Dynamic’ sharpens up everything beautifully, without ever feeling snatchy or nervous. Then there is the rider-customisable mode which is a nice refinement.

The Tuono 660 is the sort of bike you appreciate more and more, the longer and further you ride it. It’s just entertainment with a capital ‘E’. It would be brilliant at a track day: as it is, it’s brilliant on everyday roads. It makes even the shortest journey a bit special.

The Tuono is, all of a sudden, playing in an increasingly crowded segment. There is the aforementioned Triumph Trident 660, which, for all its qualities, isn’t really touting for the same business as the Tuono.

Yamaha’s MT-07 has a similar engine configuration as the Aprilia with less power (75 hp) but more torque (81 Nm).

Perhaps the bike with the strongest claim to really taking it to the Aprilia is the Triumph Street Triple 765. Like the Aprilia, it’s a blatantly sporty bike and perhaps the one the Aprilia really has to be wary of. But the extra 100 cc is a slightly unfair advantage.

Other rivals are starting to push the envelope a bit, in terms of displacement, if not intent. The most obvious is the KTM 890 Duke R. Twenty more horses, again from a parallel-twin engine and with the same emphasis on the sharpness of the chassis. However, it’s hardly a fair comparison with 230 cc more capacity.

If we’re allowing the KTM in, then we have to admit the BMW F 900 R. Same horsepower as the Tuono 660, but a little more torque. But it’s a million miles away in terms of perception. Maybe it could be made to hustle as fast as the Aprilia in the right hands, but would anyone sit up and take notice?

That’s the Tuono 660’s trump card; it’s an Aprilia and that goes a long way for many riders. It’s an exotic name and rarely in recent years has an Aprilia been this accessible. The overall package is stunning with electronics and dynamics normally found on much larger capacity bikes. This deserves to sell like hotcakes.

Our thanks to Italian Motorcycle Importers in Bryanston for help with this feature. Contact them on 010 443 4596 to arrange a test ride on this or any of the Aprilias and Moto Guzzis they have in stock. 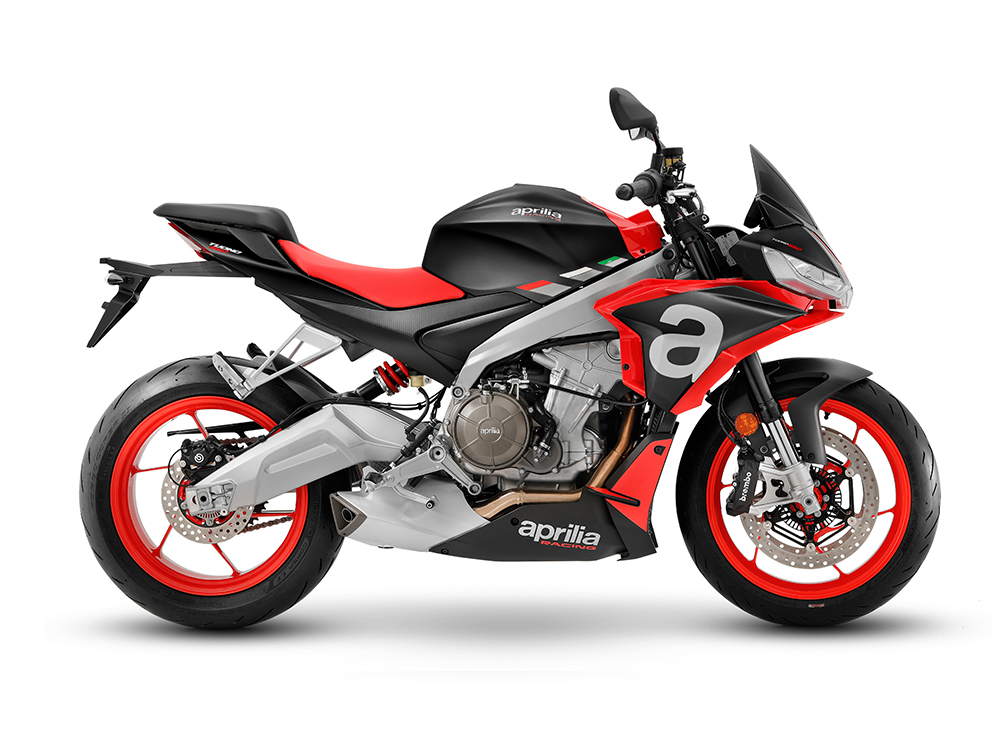